KER-CHING! ‘Dairy’ company’s bank balance shot from R16.98 to more than R30-million – in just one day 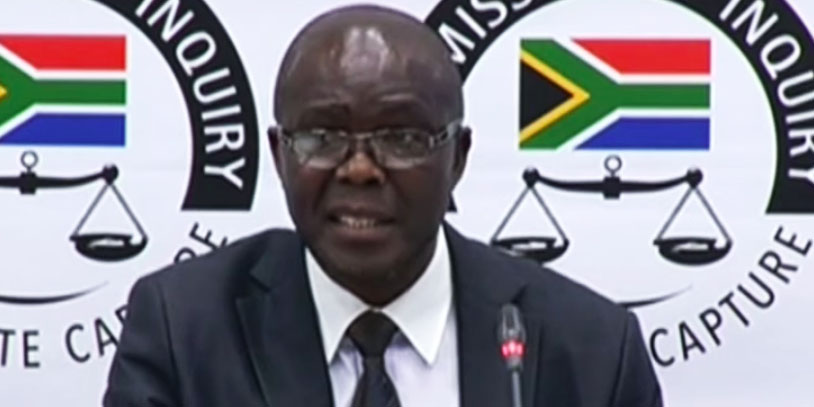 The former head of the Free State department of agriculture was chastised for fiscal irresponsibility after documents revealed a large sum of taxpayers’ money was deposited into the all but bare coffers of Estina.

The days of Zondo now total a year. Tuesday, 20 August 2019 marks a year since the public hearings began in Parktown, Johannesburg.

A year ago Stephen Grootes predicted the Commission of Inquiry into Allegations of State Capture, Corruption and Fraud would “hear and establish exactly what happened between the Gupta family, then president Jacob Zuma, and officials who worked as willing enablers”, including former mineral resources minister Mosebenzi Zwane.

However, the Commission’s latest witness has proven weak and provided little in the way of revelation on the Vrede Dairy Project, the role of political players like Zwane and links to the Guptas. The former head of the Free State Department of Agriculture and Rural Development, Peter Thabethe, stammered throughout Tuesday’s hearing.

The argument that the Vrede Dairy Project was doomed from the start is supported by a growing body of evidence.

“There is no way that that department was going to get value for money,” Zondo remarked. Thabethe disagreed, asserting if the project had been executed as planned, the province would have obtained value for money.

The point is, the project was not properly implemented, it was profoundly mismanaged. Emerging farmers from the township of Thembalihle in Vrede and surrounds enjoyed no material benefit from the scheme. Thabethe failed in his duties.

Zwane recommended the dairy project be developed in his home-town, Vrede. After the media reported on the wasteful venture, Magashule visited the site. Neither revelation from Thabethe is, to be frank, all that useful.

The majority of his stilted testimony covered boring technicalities. However, documents sourced by the Commission’s legal team reveal Thabethe’s negligence in signing away millions of taxpayers’ money intended for development.

Bank statements show that the company Estina, registered in South Africa, had R16.98 in its bank account on 4 July 2012. A day later, Thabethe signed an amended agreement with Estina. Soon afterwards, a prepayment of R30-million was transferred from the Free State government’s coffers to Estina.

With less than R20 in its account at the time, Estina could not even afford two litres of milk from a supermarket at today’s prices. But the company was soon the recipient of millions in government funds. Estina was appointed as the implementing agent in a scheme meant to empower emerging black farmers.

On 5 July 2012, when Thabethe signed the amended agreement, Estina did not have agriculture, farming and related activities listed among its functions. It would only add those functions to its business profile later that year.

“You were preparing to give Estina a large amount of money, you were giving them certain responsibilities. They said they had R228-million that they could put into the project,” said Gcabashe.

Thabethe replied that, under a standard agreement, implementing agents register dedicated bank accounts exclusively for projects with the government.

“Now I don’t know in this case if they did that but that is what we advised them.”

Alarmingly, despite his insistence that his department had conducted due diligence checks on Estina, Thabethe admitted that no checks were run to ascertain if Estina had the millions it pledged to the Vrede Dairy Project.

He said, “The question that I am being asked, if we did our due diligence on the account if there was money, no we didn’t.”

Thabethe was central to the establishment of the scheme, which was extremely risky. In terms of the amended agreement of 5 July 2012, which he signed, Estina was expected to pay R228-million toward the venture.

“But you don’t even know if they got a cent in their account,” remarked Zondo.

“The day before the R30-million went in, Chairman, there was R16, one six rand, in the account,” added Gcabashe.

“How can you expect that entity to get R228-million? Where will they get it from?” asked Zondo.

The conclusion is that Thabethe did not look after the budget of the Free State Department of Agriculture and Rural Development when it came to the Vrede Dairy Project. Thabethe, however, sought to justify his actions. He told Zondo he was “well aware” the investment was coming from the Indian dairy producer Paras, not Estina.

The apparent agreement between Paras and Estina was based on a single memorandum of understanding (MOU), valid for a year.

Here’s the catch. In 2013, Paras spokesperson Bharti Singh told amaBhungane the company had no relationship with any companies in South Africa. She denied any knowledge of Estina or the project.

“We have no businesses in South Africa. We don’t know Estina. There is nothing that connects Paras dairy to South Africa,” she said six years ago.

“We did not want to muddle the money,” said Thabethe on Tuesday, describing two phases for the dairy project. The first phase was establishing the dairy, which the government would fund. The second, he said, Estina would fund later on.

“Hence, we were implementing that.” To his mind, Estina represented Paras.

Gcabashe replied, “There is no document that clearly sets out that Paras will be providing the R228-million.” Of course, Estina never did and laundered Free State funds contributed to a luxury Gupta wedding in Sun City. DM