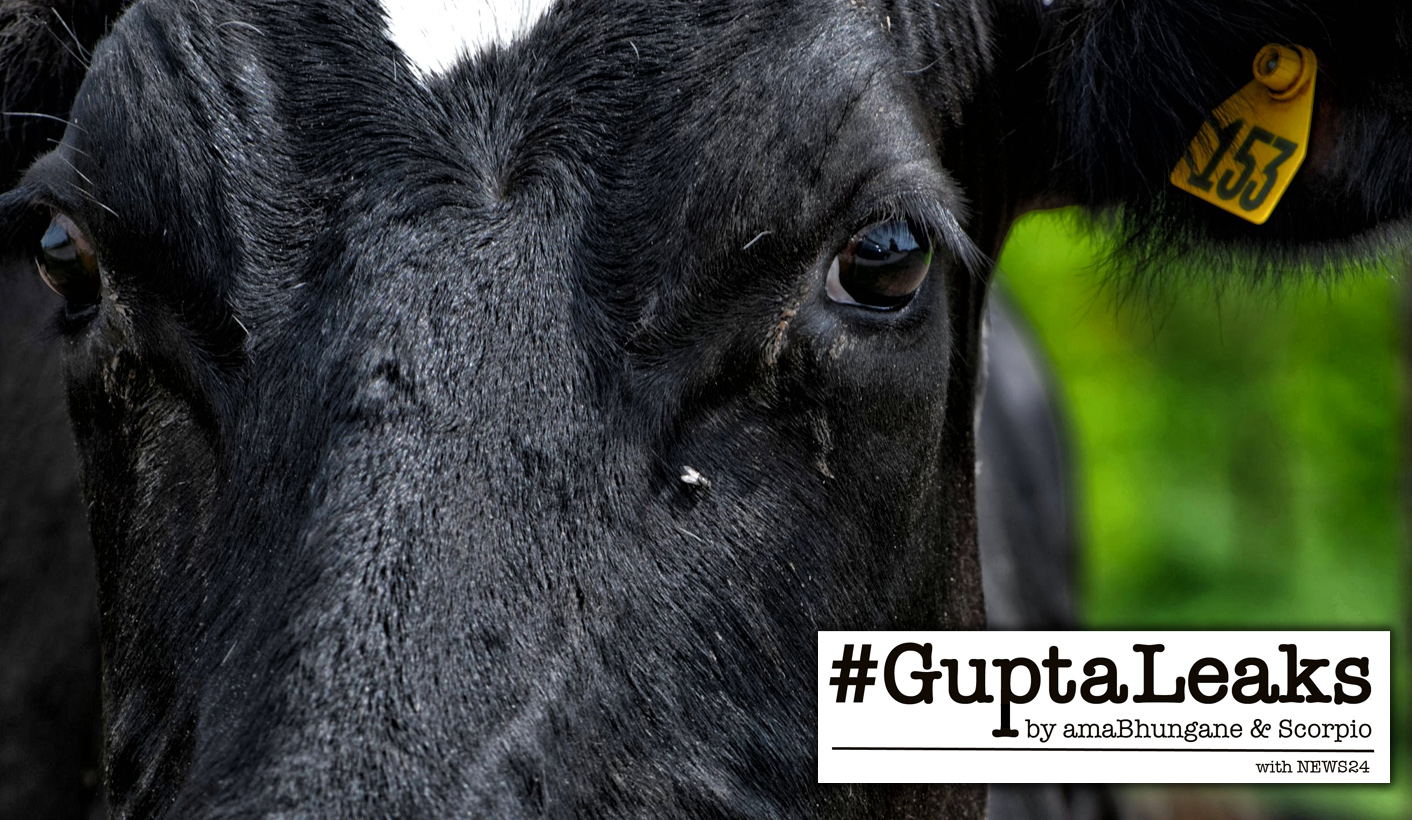 The Guptas always denied that they were behind the infamous Vrede dairy project. Now leaked records show that public funds were laundered from the project via Dubai to pay for the family’s showcase wedding. By AMABHUNGANE and SCORPIO.

By all accounts, the 2013 Sun City nuptials of the Guptas’ niece, Vega, was a dazzling display of the family’s wealth.

Except it was not.

The #GuptaLeaks reveal that the Free State provincial government largely picked up the tab for the “event of the millennium”, as it was described by a guest, KPMG Africa then-chief executive Moses Kgosana.

“My wife and I were privileged to attend and enjoyed every moment and every occasion,” Kgosana gushed in a thank-you note to Atul Gupta. “I have never been to an event like that and probably will not because it was an event of the millennium.”

Surely, though, the long list of political and business figures attending the multi-day spectacular  not privy to the veiled source of funds.

Except KPMG’s Kgosana should have been.

KPMG were the auditors of the Guptas’ Linkway Trading (Pty) Ltd. This company, we shall see, played a crucial role in allowing the diversion of cash earmarked for the Free State’s Vrede dairy project to reimburse most of the wedding expenses – R30-million to be exact.

By allowing Linkway to account for the wedding as a “business expense”, KPMG further ensured that the Guptas paid zero taxes on their Free State government windfall. (See also: The Dubai Laundromat – How KPMG saw no evil at the Sun City wedding)

KPMG said this week it was normal for it to attend “client related events”.

“In this case, the wedding attendance was approved by our risk management and the accommodation costs were borne by KPMG…”

“We stand by our work  and audit opinions issued.”

The Gupta family did not respond to our .

amaBhungane first revealed in 2013 how the Free State provincial government had gifted an unknown company, , a free 99-year lease to a 4,400-hectare farm outside Vrede.  sole director was an IT salesman with no farming experience.

The government also promised R114-million a year for three years to set up a farming operation and dairy, whose supposed purpose was to empower locals and boost provincial agriculture.

Mosebenzi Zwane, now South Africa’s mineral resources minister and then Free State MEC for agriculture, drove the provincial government to adopt the dairy project. Vrede is  . The project was not put out to public tender.

Zwane, among the Guptas’ most ardent defenders, recently claimed the #GuptaLeaks  an attack on committed government employees.

Zwane did not respond to our  made earlier this week.

In 2013, amaBhungane established that had an address that was also used by Gupta companies and that Kamal , its sole director, had ties to the Guptas. Despite these signs of Gupta involvement, the family denied any connection, save for  consulting contract performed by Linkway Trading – coincidentally (or not) the same company that features in this story.

repeated the Gupta line that the controversial family was not involved, telling amaBhungane at the time: “I wish to categorically state that they are not involved in any manner in this project.”

The #GuptaLeaks have these denials. Dozens of emails and other records show the family not only had significant control over the scheme but diverted much of the provincial government’s funding to it for their own purposes.

When successor as agriculture MEC, Mamiki Qabathe, answered questions about the project in the provincial legislature in November 2013, she said that by then a total of R114-million of the government’s money – tranches of R30-million and R84-million – had been transferred to .

Financial records in the #GuptaLeaks show that over a six-week period between August and September 2013, had transferred $8,348,700 (R84-million at the time) to the Dubai bank account of a Gupta-controlled United Arab Emirates (UAE) shell company, Gateway Limited.

That is, the entire R84-million second tranche transferred by the Free State government to landed in a Gupta-controlled US dollar account at Standard Chartered Bank in Dubai.

In a clear sign that Dubai was little more than a laundry stop, a forensic examination shows that at least three-quarters of that money  shortly bounced back to two Gupta companies in South Africa – including to pay for the wedding. It went like this:

The wedding celebrations were held at Sun City over four days at the end of April and beginning of May 2013.

Three months later, on 31 July, the Guptas’ Linkway Trading, based in South Africa, presented Accurate Investments Ltd, a second Gupta-controlled shell company in the UAE, with a four-page, invoice for expenses for the “V & A Function … at Sun City” (the bride and groom were Vega and Aakash).

The items for which Linkway invoiced Accurate ranged from R13,086 for chocolate truffles to R2.3-million for scarves, R247,848 for fireworks and R13.9-million for “event services”.

As of the date of Linkway’s invoice, Accurate had a mere $15,811 in its account at Standard Chartered – a tiny fraction of the amount invoiced. But thanks to the Free State government and , Accurate’s bank balance would soon improve drastically.

This is where the laundromat started spinning. If the details are confusing, it is because they were meant to be, but it went like this:

Accurate then immediately transferred $1,986,000 to Linkway’s account at the State Bank of India in Johannesburg. The wire transfer confirmation notes an invoice number identical to the one contained in Linkway’s wedding expense invoice presented to Accurate.

And so, the Dubai laundry machines started spinning again:

The wedding bill, however, was not the end of the Guptas’ Free State gravy train.

Weeks later, on 23 September, a further $3.1-million of the Free State’s cash was washed and delivered to the Guptas in South Africa via Dubai.

This time, the cash flowed from to Gateway to yet another Gupta UAE front, Fidelity Enterprises Limited, which then transferred $3.1-million to Oakbay Investments, the Gupta family holding company in South Africa.

With so much of the Free State’s money ending up with the Guptas, it appears that very little ended up with actual suppliers to the project.

As we previously reported, $3,448,800 (about R34-million then) of the R84-million that was sucked from to Dubai in August and September 2013 was justified by a Gateway invoice for a milk plant to be supplied by Star Engineers, an engineering firm in the Guptas’ hometown of Saharanpur, India.

#GuptaLeaks financial records, however, show only a tiny fraction of that – $165,610 – was transferred to Star Engineers during the course of 2013. Whether that was the full amount paid to Star remains unclear.

Back-to-back transfers like those seen in the Guptas’ Dubai accounts were obvious red flags. Indeed, Standard Chartered confirmed this week that it closed the accounts in early 2014, shortly after these transfers.

A spokesperson for the bank said: “Standard Chartered takes its responsibility to combat financial crime very seriously and is fully committed to doing business in accordance with local and international regulatory and legal requirements.”

By the time was kicked off the project in 2014 following a national Treasury probe and amaBhungane’s exposure of dead cows being dumped in a ditch, the provincial government had paid about R210-million in taxpayers’ money.

Of that, it is now clear, the Guptas, and not the people of the Free State, were the major beneficiaries.

Amid the #GuptaLeaks revelations, Mineral Resources Minister Mosebenzi Zwane recently unveiled controversial changes to the Mining Charter. The proposed revisions seem to fit one particular family of Indian immigrants like a glove.

black people would now also be deemed to have been previously disadvantaged by apartheid, thereby radically transforming the Guptas into  BEE partners.

The Guptas started arriving in South Africa mere months before the 1994 elections.

While appears to have repeatedly bent over for the Guptas – even going as far as suggesting the #GuptaLeaks were driven by anti-black racism targeting him – the leaked documents suggest that perhaps apparent blind loyalty to the Guptas is not entirely reciprocated.

Considering the colossal quantum of cash diverted from Vrede dairy project to the Guptas’ pockets, one would assume that was the Guptas’ guest of at the Sun City extravaganza.

Rather, he appears to have been an afterthought.

Possibly no other document in the #GuptaLeaks trove was circulated as widely, and revised so often, as the wedding’s guest list.

Yet, on the near-final guest list, name – a seemingly late addition near the very bottom (at row 242 out of 254) appearing under the subheading “Extra Guests” – was as “Mosebebi”, an error which endured throughout the drafts.

Even the Guptas’  enemy, Peter Bruce, the former editor of Business Day, snagged a higher spot (235) than Zwane on the guest list.

While the fate of the mining charter revisions recently tabled by is uncertain, one thing is clear: with the next generation of  now in their teens and 20s, weddings (and wedding expenses) will continue apace.

For all his steadfast efforts to radically economically transform the Guptas, perhaps “Mosebebi” should at the very least demand pride of place at the next one. DM