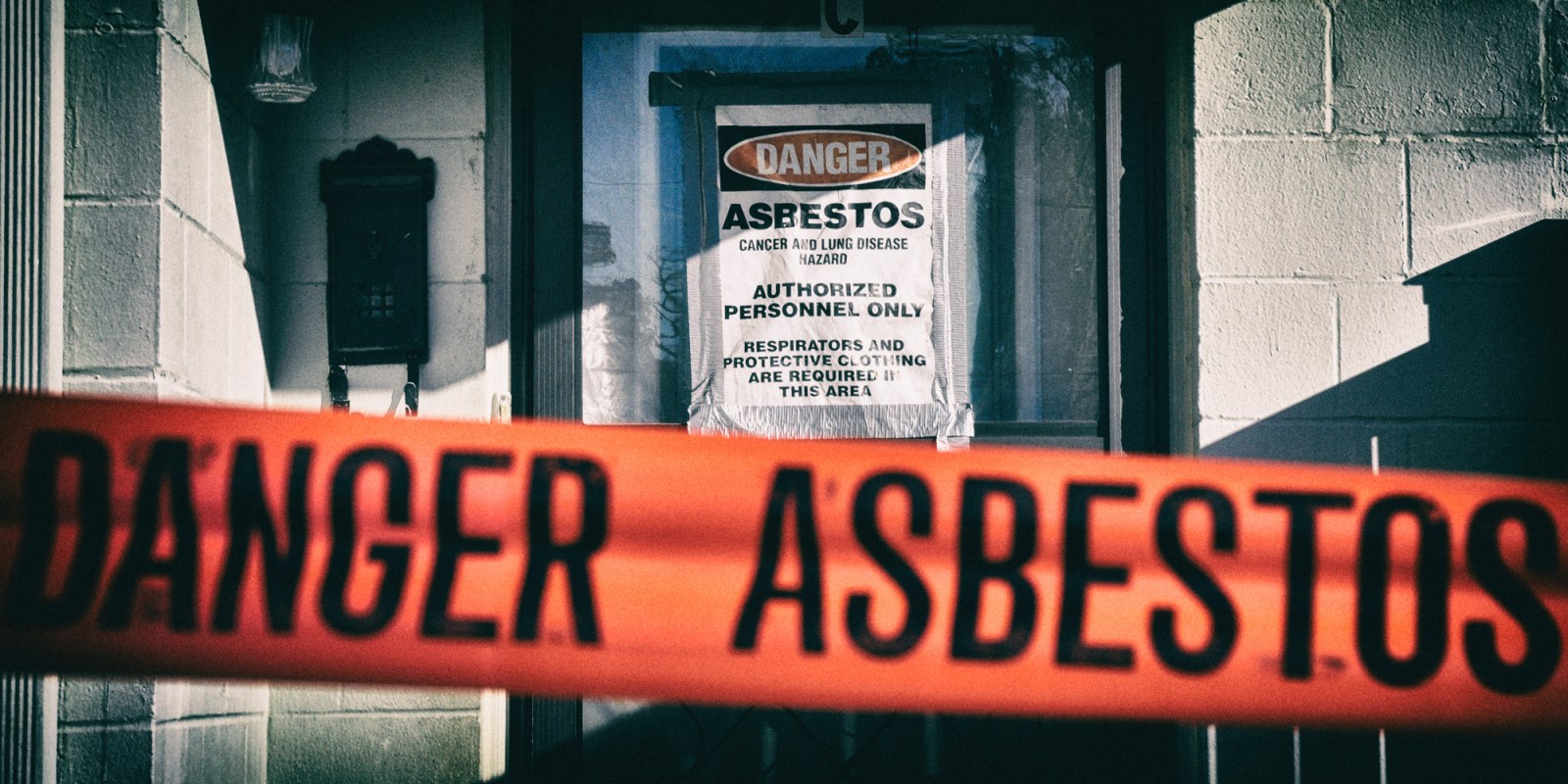 The erstwhile Director-General of the Department of Human Settlements, Thabane Zulu, has defended a transaction of R600,000 paid to a Ballito car dealership. The deposit, he says, was ‘above board’ as Blackhead Consulting CEO Edwin Sodi owed Zulu money for alcohol purchased throughout the year. Blackhead and Diamond Hill formed a joint venture, which bagged a Free State asbestos project of more than R200-million. Five years on, the hazardous asbestos is still there.

Former Director-General of the Department of Human Settlements nationally, Thabane Zulu, reluctantly testified at the State Capture Inquiry on Thursday 6 August 2020. First, though, his lawyer pushed for a postponement.

Zulu sought leave to apply to cross-examine former MEC of Economic Development in the Free State, Mxolisi Dukwana. Advocate Shane Dayal SC claimed Dukwana was the inquiry’s “star witness” regarding a Free State asbestos audit of more than R200-million. Dayal’s client, Zulu, took issue with Dukwana tabling a spreadsheet reflecting initials and figures, including “TZ” beside a figure of R10-million.

“I am not a beneficiary of that spreadsheet,” said Zulu, who argued he would not have been required to appear before Zondo if it weren’t for Dukwana’s evidence. “I did not get any money of R10-million […] I still remain with this statement that I did not receive any money as it appears on the spreadsheet,” he insisted.

Dukwana testified on the document entitled “Cost of Business Schedule” and asserted it denoted individuals (several of them Free State government officials) using initials. He claimed individuals listed received kickbacks in connection with what he called the Free State “asbestos heist”.

Pretorius asserted Dukwana provided the document “as a whistleblower” but conceded Dukwana’s evidence on it was “largely speculative” hearsay. Inquiry investigators conducted their own probe, consulting bank records and witnesses regarding financial flows.

These include deposits of R1-million for a Maserati and R600,000 for a Range Rover from Blackhead Consulting Pty Ltd, to a Ballito car dealership, SMD Trading Group. Most evidence this week concerned the 2014-2015 asbestos audit in the Free State. Public Protector Busisiwe Mkhwebane found it “seriously irregular” in a report released earlier in 2020.

Zondo dismissed Zulu’s application for postponement. Hours of questioning on Zulu’s role in the national human settlements department followed, specifically on his accounting officer duties around 2014-2015. Pretorius raised official correspondence between Zulu and the erstwhile Head of Department of Human Settlements in the Free State, Nthimotse Mokhesi.

At times, Zulu avoided bare confirmation of the contents of letters he himself wrote, and after segments were read to him. In one letter, Zulu refers to a “contract” and yet in his evidence he said “no contract” existed. At the time, said Zulu, the national department had no contract with Blackhead; the company was merely on a panel, which was essentially a shortlist of companies able to bid for potential work.

Pretorius pressed Zulu on which “contract” Zulu mentioned in the letter. “There was no existing contract with Blackhead,” repeated Zulu, who mused that perhaps he was seeking clarity in referring to a (non-existent) contract in the text. “I must indicate, Chair, that this is also on interpretation basis,” said Zulu. “In fairness, Mr Zulu, we are asking you to interpret your own words,” remarked Pretorius.

Toward the end of the day, Zulu faced a grilling over R600,000 Blackhead CEO Edwin Sodi transferred the Ballito car dealership on Tuesday 22 December 2015. Zulu confirmed Sodi’s payment and testified it was a deposit for Zulu’s car, a Range Rover.

Zulu testified Sodi owed him R604,000 for alcohol Sodi bought from Zulu throughout 2015. Zulu and his wife own a business called TZ Lounge in Sobantu township, he explained. It includes a sports bar, runs events, trades in alcohol and supplies catering.

“He was not the only customer with the same arrangement,” said Zulu.

Zulu continued: Sodi hosted parties for “dignitaries” at his home in KwaZulu-Natal, hence his acquisition of alcohol worth hundreds of thousands of rand throughout 2015.

“Instead of taking the money I decided to instruct him to deliver the money where I wanted it,” explained Zulu.

“Was that a written arrangement? Are there documents about the arrangement?” asked Zondo. Zulu said the arrangement was verbal. TZ Lounge records included notebooks and diaries, which would — he asserted — reflect Sodi’s alcohol orders.

Zulu was surprised investigators had not approached him for these records. He complained about a breakdown in communication with inquiry representatives. However, Zulu did not volunteer these exhibits, which might corroborate his version. Zondo asked:

“The R600,000 that you instructed Mr Sodi to pay to SMD. Do you relate it to the asbestos project or not?” Zulu repeated, “Not at all. Not at all, Chair.”

In Zulu’s view, the R600,000 deposit was “above board” and there was “no way” he was going to hide it. He emphasised he had officially declared the business TZ Lounge. Puzzlingly, Zulu claimed the R600,000 deposit for his Range Rover was “in the public domain” as it appeared in records for Blackhead and SMD. Investigators sourced those records.

Pretorius referred to a statement from Sodi asserting he made no payment into the personal bank account of any government official. Zulu confirmed the R600,000 did not reflect on Zulu’s personal bank statement, as Sodi paid the funds directly to SMD on his instruction. Sodi is due to testify on Friday 7 August 2020.

The inquiry’s stakes are rising as its deadline nears. More witnesses implicated in allegations of misconduct are set to testify, and Zondo may soon compel all future witnesses to appear. He is “seriously” contemplating a change of tack. Earlier this week Zondo said:

“We must really seriously consider compelling everybody, otherwise we will keep on having these problems.”

Lately, several witnesses who previously undertook to appear before Zondo have failed to pitch up on time. On appearing after being forced to do so, for instance, Gauteng high court judge Tintswalo Makhubele sought yet another postponement of her testimony. She disputed any perception she was a difficult witness.

“We issue notifications and people either don’t come or send emails to put up one or other reason for saying they won’t be able to come.” The remarks arose following details as to why a witness, John Matlakala, did not arrive as previously agreed. Matlakala was the director of supply chain management in the Free State Department of Human Settlements.

From the second week of July, Matlakala received correspondence on when he was required to attend proceedings in August. The initial date set down for his input was moved by one day, and he was notified.

“At all stages, he agreed he would come on the fourth of August,” said Pretorius.

However, the day before Matlakala was expected to appear before Zondo he wrote with news he was no longer represented and he would tell the commission when he was again represented. Matlakala would therefore not appear as agreed. A commission reply told Matlakala he must attend on Tuesday 4 August 2020 as agreed. He could then approach Zondo in person to seek a postponement. The very day Matlakala was set to appear, attorneys he belatedly acquired wrote to the commission. Pretorius told Zondo the letter read:

“Kindly take note that our offices received instructions during the course of the midnight hours on 3 August 2020 and have been unable to adequately prepare a substantive application for postponement in terms of Rule 11 accordingly request a postponement of the proceedings today to allow our client adequate legal representation. We trust that you find that in order.”

Matlakala did not arrive.

“So, he’s not here. I’m beginning to wonder if the commission must issue summonses against everybody because it looks like the stage at which we are at more and more people come up with some or other reason for not appearing,” said Zondo.

Zondo has instructed the leaders of different work streams to review who is scheduled to testify in upcoming weeks. They must apply their minds to the question of a summons, said Zondo. Even in cases where a notice had been issued, a summons may be issued.

“Because, then, failure to appear when a summons that has been served will be a criminal offence,” said Zondo. DM