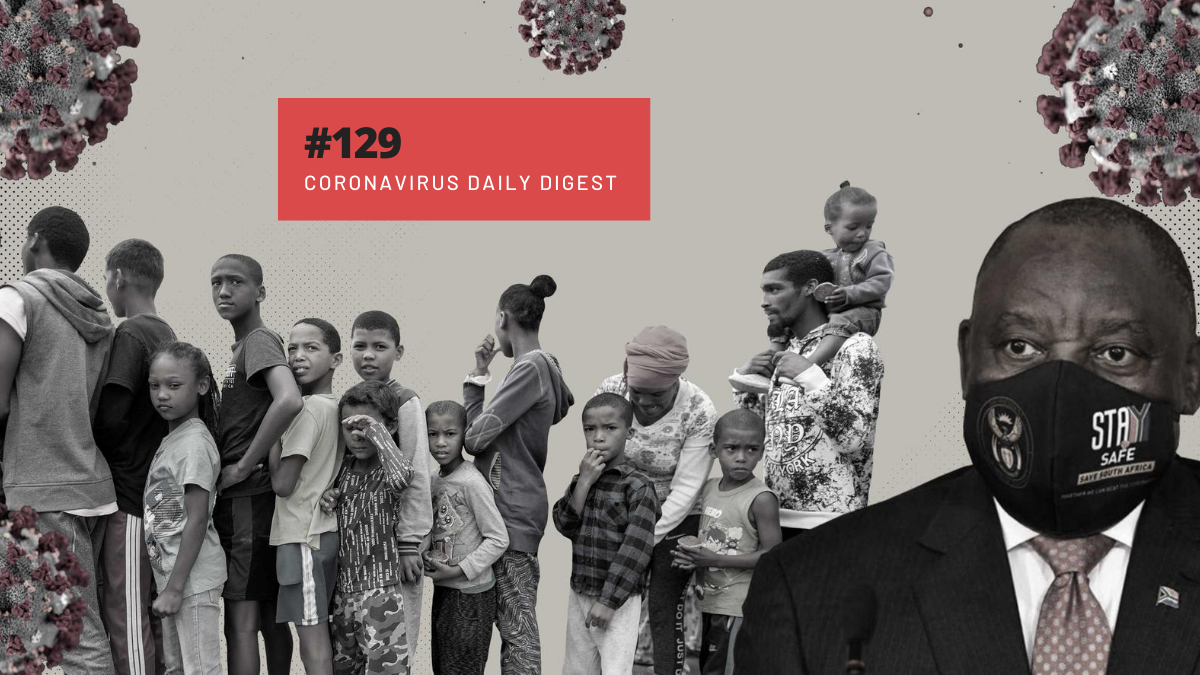 The Solidarity Fund says it is doing the best it can under trying circumstances. Meanwhile, the ministerial committee compiling lists of Covid-19 tenders reported back to Parliament on its progress. The Special Investigating Unit has scored its first victory and KwaZulu-Natal has admitted an error in its Covid-19 Procurement Disclosure Report.

Scroll through the gallery below to view the latest Covid-19 numbers available on 21 August at the district level. All maps are sourced from provincial health departments. Eastern Cape, Free State, Limpopo and Mpumalanga did not provide an update by the time of publishing: 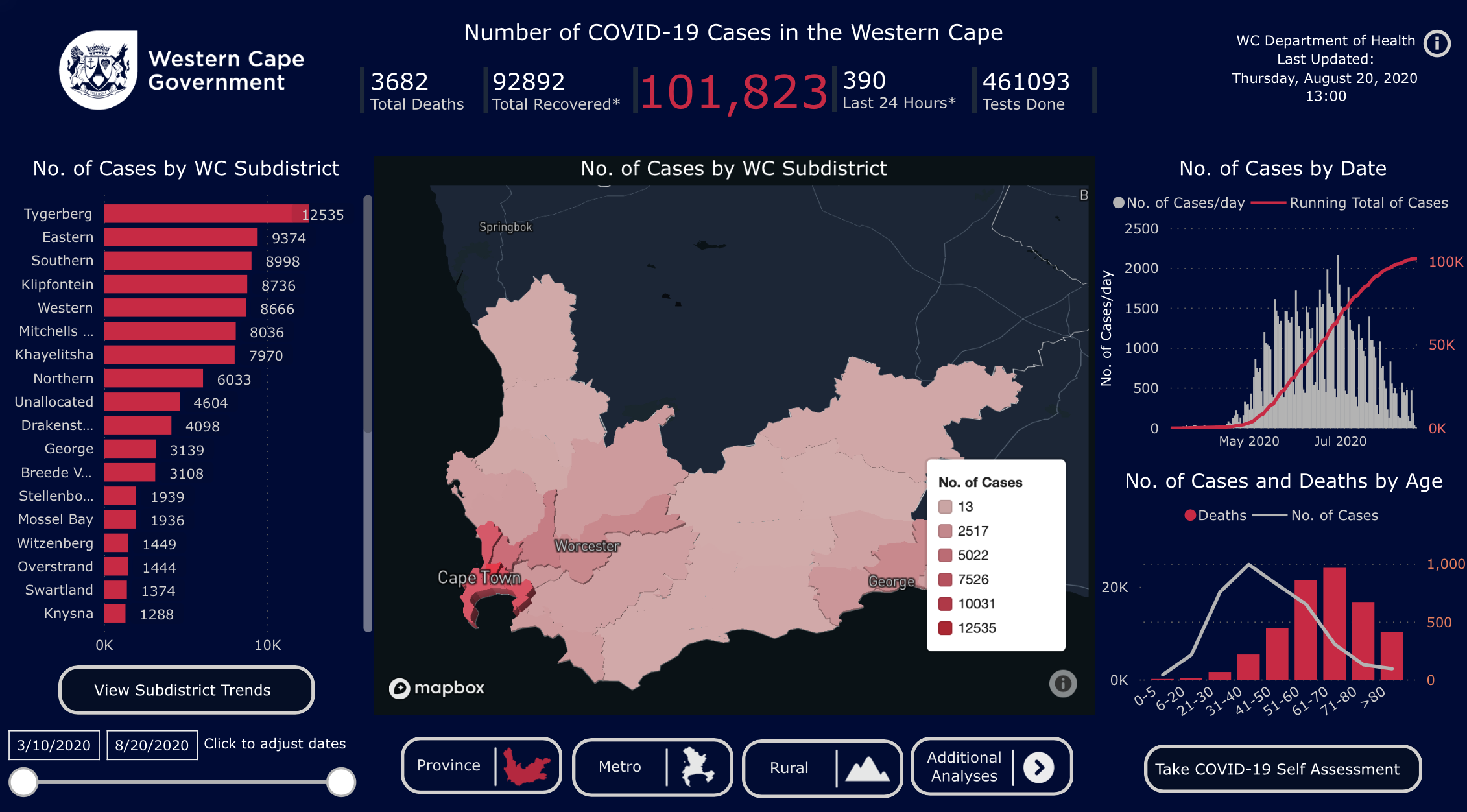 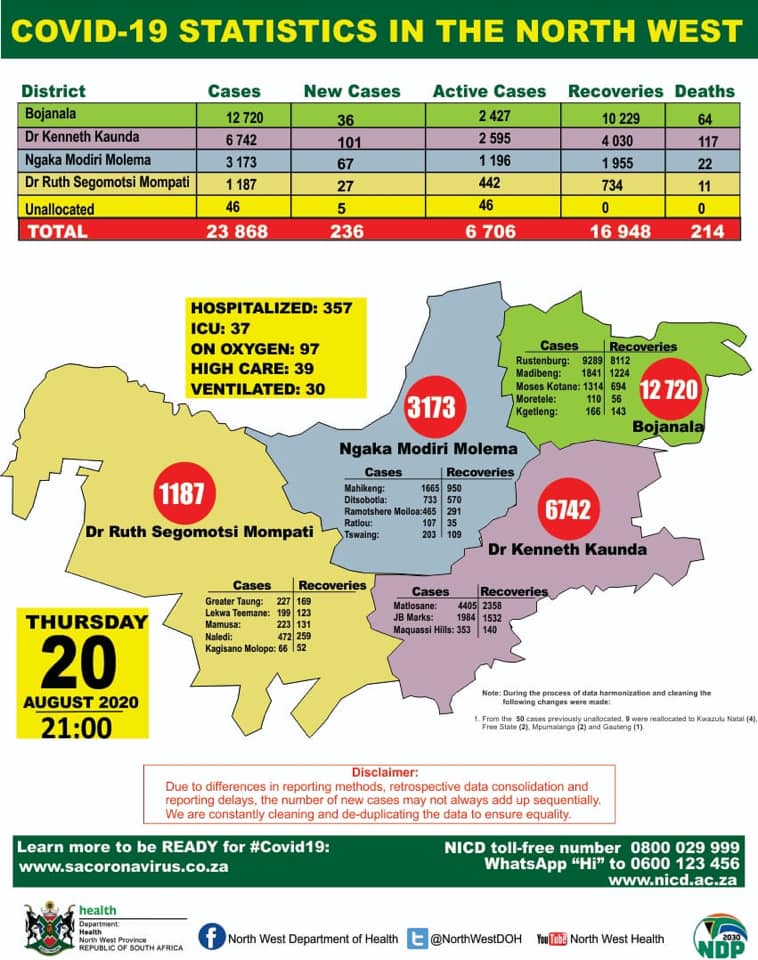 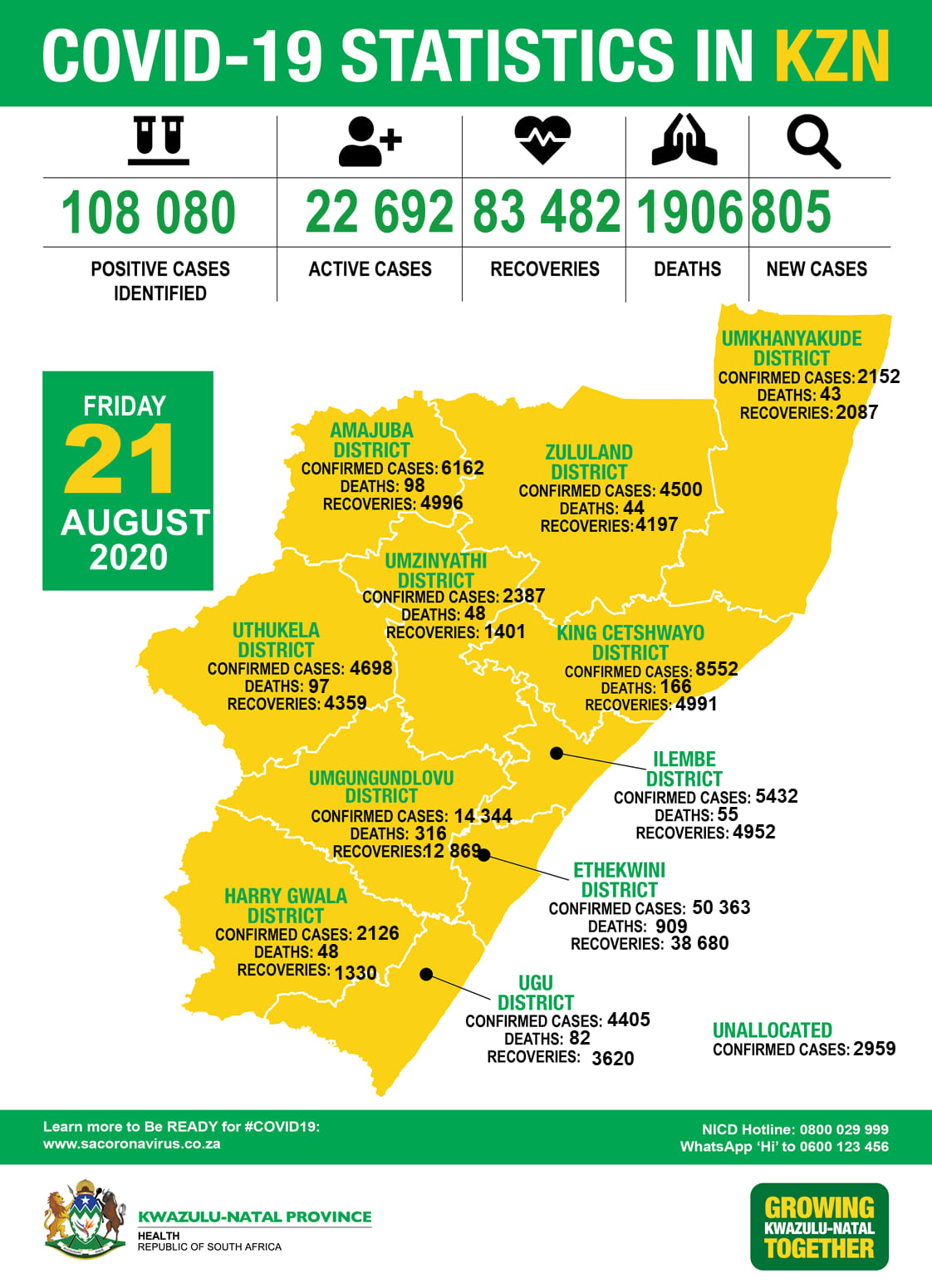 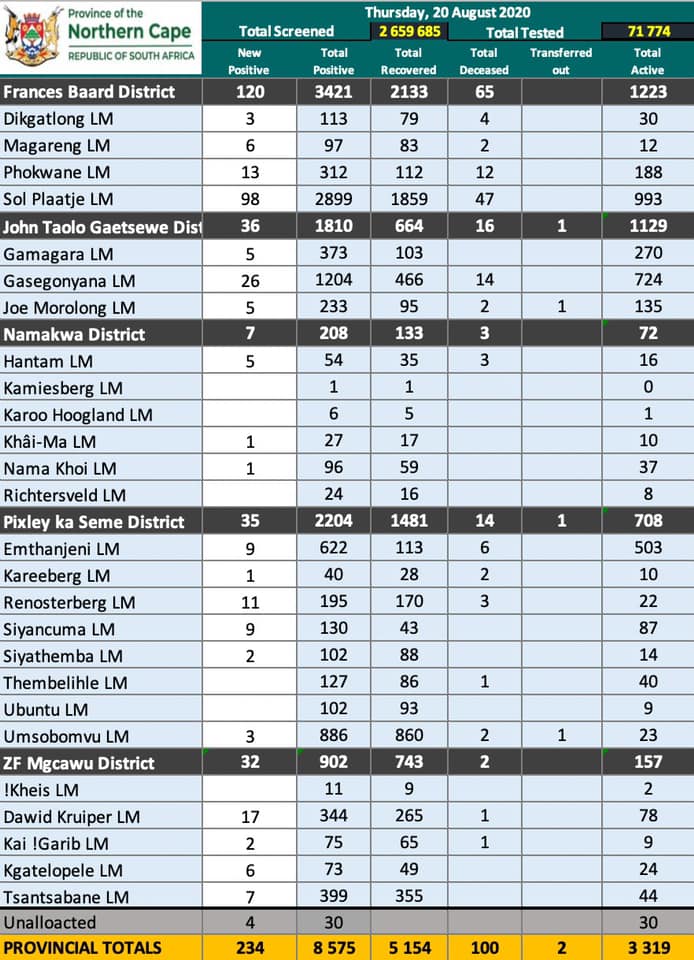 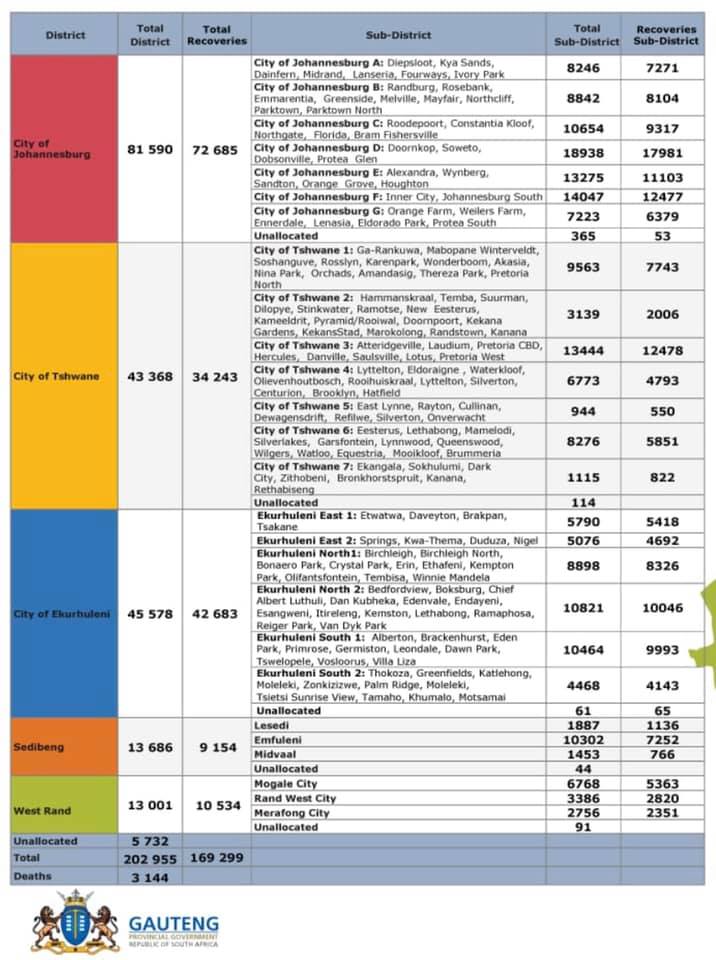 On Friday, the fourth instalment of a series of expert advisories on how to respond to the Covid-19 pandemic was published, with the focus being a 10-point plan to make schools safe. It evaluates recent research on what is known about Covid-19 in children and gives advice on practical questions often asked by teachers, families and scholars.

The previous advisories are listed below:

The Solidarity Fund is doing the best it can under challenging circumstances amid high pressure, says its CEO Nomkhita Nqweni. This comes a day after Daily Maverick published an article which raised concerns over the fund’s promise of transparency. Nqweni said Business for South Africa played an advisory role to the fund and recommended suppliers and was not responsible for selecting them.

She admitted there had been some missteps and that criticism for not releasing more detailed information on procurement was “a fair challenge”. As Rebecca Davis writes, Nqweni said the fund cannot do everything perfectly because of the nature of the fund and scale of the Covid-19 crisis.

Measures to prevent corruption at government departmental level are essential in the fight against corruption, warned top law enforcement bosses as they appeared before Parliament’s Standing Committee on Public Accounts on Friday. If proper measures had been put in place at this level, “… we would not be sitting with this massive challenge”, said National Director of Public Prosecution Shamila Batohi. The meeting was called for an update from the ministerial committee set up to compile lists of Covid-19 tenders. As Marianne Merten writes, the lists are now public and the committee has proposed dedicated courts to fast-track these corruption cases.

In addition, the Special Investigating Unit made its first inroads on Thursday night. Its request to freeze R38.7-million in the bank accounts of 40 Gauteng-based companies involved in looting was acted on by the Special Tribunal. But there’s still much work to be done.

During an address to the South African National Editors Forum, KwaZulu-Natal Premier Sihle Zikalala admitted to a R100-million “mistake” in the Covid-19 Procurement Disclosure Report he released last week in a bid to show the province’s supposed transparency. As Des Erasmus reports, the error relates to municipal Covid-19 expenditure – the municipality with the lowest number of Covid-19 cases had racked up a huge sum.

Meanwhile, Nehawu is preparing to go on strike to demand adequate personal protective equipment for healthcare workers and salary increases for public service employees. The largest union said the strike is to protect their members from dying, even if this interrupts healthcare facilities. It says little action has been taken to address the unsafe working conditions the union flagged in July. The campaign will begin next week and continue into early September. As Greg Nicolson reports, the union said that if demands are not met by 10 September all labour will be withdrawn.

The early childhood development sector has concluded a week of national protest against the decision to allocate R1.3-billion towards employing 36,000 young people as compliance monitors in early childhood development centres. They argue that these officers are necessary, but that the funding is needed to save the centres from imminent collapse. According to an April survey, 68% of the centres fear they will not be able to reopen. This would result in the loss of essential learning services and daycare in the country’s poorest communities. Ayanda Mthethwa spoke to the centre operators about their struggle to survive.

A new socio-economic impact report by the UN urges South Africa to intervene with a multi-sectoral approach to stop people from slipping deeper and deeper into poverty. It said it will take up to five years for the economy to recover to pre-Covid-19 rates, but urged that the country should rebuild into a more inclusive society. Zukiswa Pikoli unpacks its findings and recommended solutions.

In Johannesburg, the Inner City Community Action Network has been running the #womandlachallenge through August. Every Sunday this month, the Katlehong Kids dance troupe has been teaching anyone and everyone how to do the #jerusalemachallenge on the streets of Maboneng – masked up and physically distanced. They encourage people to film themselves doing the dance, upload it, make a donation, and encourage others to follow suit. It aims to fundraise for women and children’s empowerment in the inner city, but hopes that the fundraising challenge will become a global sensation.

Nelson Mandela Bay may be seeing a decline in new Covid-19 infections, but the city is still grappling with “a year of loss”, says Shane Brown, head of the city’s disaster management and head of the joint operations committee. “I have been in disaster management for 30 years and never before was I called on to handle anything like this,” Brown said. “The scale of loss of lives, of livelihood, of experiences remains very big.” Estelle Ellis spoke to Brown about the path of the pandemic from the frontline.

The City of Cape Town has approved and adopted its 2020-21 adjusted budget – but R400-million will be rolled over from incomplete projects from the previous year. The municipality said Covid-19 and the lockdown had delayed these projects. However, other parties said the City was using the pandemic as a scapegoat and questioned why budgets had been reduced. Karabo Mafolo reports. DM/MC