Maverick Citizen: Yes We CAN!

Artists, activists and athletes have fun in downtown Joburg to increase awareness of women’s issues

The month-long Womandla Challenge led by the Katlehong Kids, who now have almost three million views of their Jerusalema dance challenge video on YouTube, lights up the streets of Maboneng in downtown Joburg every Sunday in August – Women’s Month – in aid of vulnerable women and children. 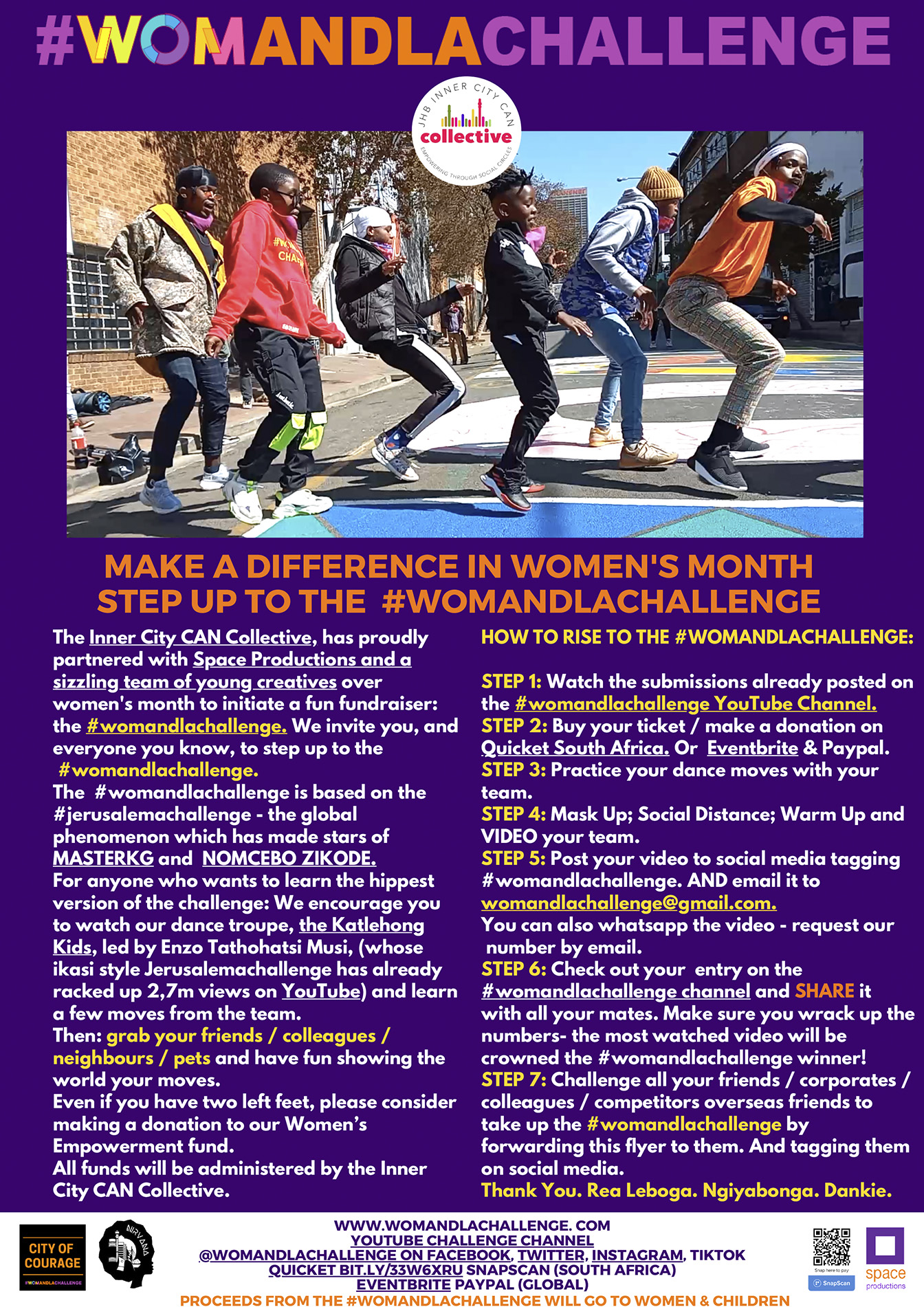 Every Sunday in August 2020, the streets of Maboneng – which in seSotho means “place of light” – in downtown Johannesburg spring to life, and resonate with the kaleidoscopic images and syncopated sounds of the sizzling Katlehong Kids. The dance troupe has racked up almost three million views of its #Jerusalemachallenge on YouTube as it leads activists, artists and catalysts to gather (masked up and social distanced) in celebration of a month-long national and global #womandlachallenge to honour South Africa’s heroic women, past and present.

The #womandladancechallenge, which aims to become a global viral fundraising phenomenon, is one of the many fundraising initiatives that have emerged since lockdown, and aims to be fun, accessible and inclusive. It is a project of the Inner City Community Action Network (CAN) Collective. The community action networks (CANs) are part of the many civil society and non-profit community-based organisations that have emerged across the country as loose alliances, with many established non-profits since the arrival of Covid-19, focusing on community assistance and disaster relief (feeding, education, personal protective equipment and clothing).

The #womandlachallenge is a hybrid of two global movements: the  #jerusalemachallenge that has made global stars of @masterKG and @Nomcebozikode. – who have also been nominated by Minister of Sport, Arts and Culture Nathi Mthethwa as “South African global cultural ambassadors” – and a new street art movement, emerging with the Black Lives Matter protests in the US.

For the #womandlajerusalemachallenge, organisations – civil society, community, commercial, public sector, faith-based and family – are encouraged to mask up, practise social distance and put their best dancing feet forward. They are then encouraged to upload a video of their performance to social media, donate a nominal amount per person or team, and challenge their peers to do the same.

The second element in the challenge will remain indelibly etched on the streets of Maboneng – as a street art piece. The word WOMANDLA was painted on the tarmac of Fox Street by local artists and community volunteers over the course of three days leading up to Women’s Day. The sign is visible from above and has already been integrated into local music videos. The mural was inspired by the Black Lives Matter street sign in downtown Seattle in the US, and we hope that it will become as celebrated as the latter.

The #womandlachallenge launched on 9 August 2020 in Maboneng, live-streaming on Facebook with a truly sizzling dance performance by the Enzo Dance Academy, plus a moving poetry tribute to women by South African Africa slam poet champion Thuthukani Myeza, and a heartfelt gusty solo by Jo Stuart, who can be heard at Maboneng every Sunday.

The event was a culmination of a @cityofcourage run through the city by gender activist Luke Lamprecht accompanied by his teams from @fightwithinsight and @nirvana, two of the beneficiaries of this fundraiser that work with youth in the inner city. Other beneficiaries include Women and Men Against Child Abuse and Afrika Awake. The run took them past prominent public artworks celebrating South African women.

As the campaign rolls out on Instagram, YouTube and other social media, the Katlehong Kids have agreed to return to Maboneng every Sunday in August at 11am and will be training public and community how to bop and move to #Jerusalema. The Katlehong Kids troupe works in the community of Katlehong, training kids in dance, gymnastics and movement, and is the initiative of Enzo Thathohatsi Musi of Enzo Dance Academy. Their weekly performances on the vibrant mural include local skateboarders and community – and whoever arrives on the Sunday – and have even included Maverick Citizen’s Mark Heywood in running gear.

For the organisers, however, the most exciting element of the project is the emergence of a team of art-ivists – established artists and passing members of the community – who gathered around the project, volunteering their skills for painting for the launch event, and beyond.

The artwork was a truly inclusive process. Materials and the space were allocated by the new precinct management team. The outlines of the WOMANDLA logo were completed over two days by tattoo artist Mojalefa Mjakes Molefe and his assistant on the tarred road beneath a recently unveiled mural by Bongani Mahlati depicting a pantheon of African women musicians, commissioned by BazArt for Apple iTunes.

Street artists who volunteered their time and talent, adopting one of the eight letters in Womandla, include:

A – Amaha, who stopped past and adopted the letter A, making it a homage to women in Ethiopian Amharic letters reading Woman, Mother, Earth.

D – Zee, recently relocated from Cape Town, was walking past, and took ownership of the letter D.

LA – The L and the A were overseen by Bilal, with Sthembiso, Andile and Tristan, who met Dumisani in design school, completing the enclosed heart in vibrant orange and electric green.

And as the artwork grew and took on deeper meaning, local street entrepreneur and photographer Sbu of SoFly joined the project early on the Friday as videographer. His branded swag – created on Saturday night – was worn by the dancers on the Sunday. The young skateboarders Andile and Bonginkosi were a constant source of inspiration and help, with ‘Nkosi developing a new skill set as he took to operating a skateboard and handheld camera simultaneously. The final coup de grace was courtesy of a passing drone owner, Ngoyi, who  volunteered his drone footage of the emerging mural to the project, providing a perspective of Maboneng and the WOMANDLA artwork that many won’t get to see.

The #womandlachallenge will continue throughout August – on Sundays for 40 participants and 24/7 in cyberspace – as more and more organisations are urged take up the challenge and donate to the cause. The artists and organisers are planning on #womandlachallenge flash mob performances as they gain followers throughout the month. DM/MC

Kathy Berman is a community catalyst and change activist. Her work ranges from incubation and acceleration to community activation and celebration.