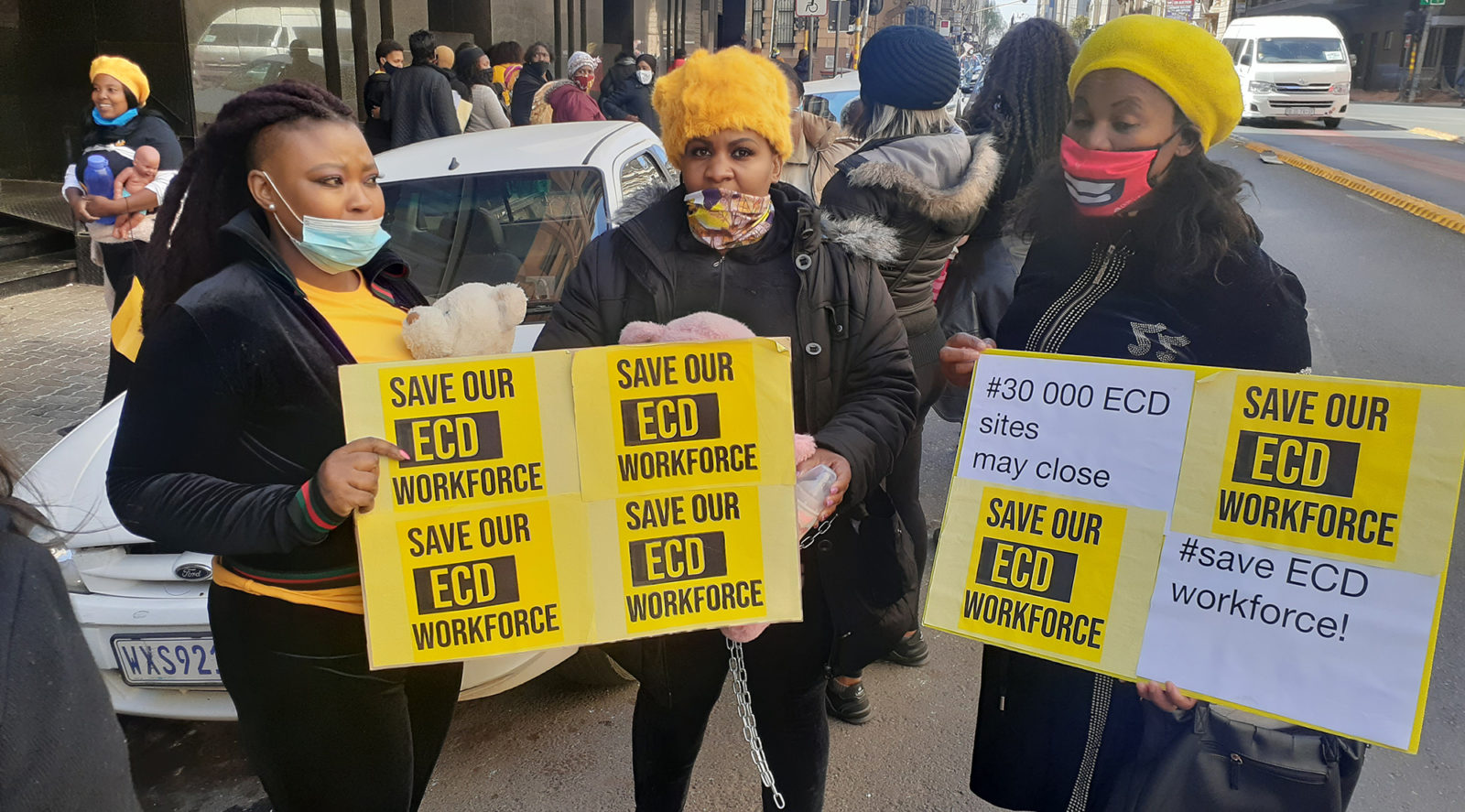 The Department of Social Development has set aside R1.3bn to hire youth compliance monitors in early childhood development centres. Meanwhile, many centres could cease to exist without government funding.

The early childhood development (ECD) sector stands to lose 175,000 jobs without funding from the government.

“The early childhood sector is at its most vulnerable now and it needs intervention,” said Colleen Horswell-Daniels from the Covid-19 People’s Coalition ECD workstream.

On Monday 17 August members of the ECD community embarked on a national week of protest, (ending on Friday 21 August) against a decision taken by the Minister of Social Development, Lindiwe Zulu, to allocate R1.3-billion towards the employment of 36,000 young people as compliance monitors in ECD centres.

“There will always be a need for compliance officers, but not now,” Horswell-Daniels said. “The sector will always need to be compliant, not only regarding Covid-19 regulations but to also ensure that there’s compliance in terms of the Children’s Act and other laws.”

In South Africa, early childhood education is provided for by small-scale entrepreneurs and non-profit organisations, many of which are run by black women in low-income communities.

A survey report released in April found that 68% of ECD operators (including ECD centres, playgroups, day mothers and other early learning programmes) are worried that they will not be able to reopen after the lockdown, with 99% reporting that caregivers had stopped paying fees after the nationwide closures on 18 March.

“The operators most at risk of closure are situated in our poorest communities and providing an essential early learning service and safe daycare to the most vulnerable children in South Africa,” Leonard Saul, the chief executive officer of the South African Congress for ECD, said at the time of the release of the report.

According to the National Income Dynamics Study (NIDS) Coronavirus, Rapid Mobile Survey, three million people had lost their jobs by the end of April, and women were disproportionately affected because they account for two million of the lost jobs.

The women employed in the sector will be severely affected as they are likely to be unable to support their centres without government relief. The children who rely on the education, nutrition and support provided by the centres will also take a blow.

At one of the demonstrations held in Johannesburg on Thursday 20 August, Sakhile Jiyane told Daily Maverick that her house is on the brink of being repossessed by the bank after she missed payments on her bond.

Jiyane has, for the past 26 years, been running an ECD centre in Ormonde, south of Johannesburg in her yard. Since her centre closed in March, she has not received any school fees payments from caregivers, many of whom, she says, have been left without a stable income because of the pandemic.

“I have been running my centre single-handedly since 1994. No one knew that we’d have the virus with us and when we need assistance the most, government turns their backs on us.”

Horswell-Daniels said many centres remain closed because owners do not have money to not only pick up where they left off but to also be Covid-19 compliant.

Those that were able to reopen did so with the help of loans.

Lydia Plaatjies, an ECD curriculum developer and adult education teacher, said the majority of centres are not registered with the Department of Social Development and therefore do not qualify for government funding.

“They are fully dependent on fees paid by parents, and as you would know, since March many parents have not been able to work.”

Plaatjies said she was part of the ECD committee invited by the social development minister to discuss the kinds of measurements that were to be put in place before centres started operating in early July.

“The first thing they told us was that there is no money for anything. There’s no money for PPE.” But in the same breadth, Plaatjies says, she was surprised when Zulu announced that R1.3-billion was being directed towards hiring compliance monitors.

“If the majority of the centres are closed what is it that these monitors will monitor?”

Jiyane, just like every ECD worker and supporter, believes that the R1.3-billion can instead be invested back into the sector to save the many centres on the verge of being shut down because of financial constraints.

“We are saying to the minister, she must give the money to the sector, divide it amongst us, registered and unregistered centres so that we can save the jobs of our women.”

The government has paid lip service to the importance of ECD education in the country’s national development plans. President Cyril Ramaphosa committed during his February 2019 State of the Nation Address that the government would invest in the sector and move it to the Department of Basic Education.

“Until we have political will behind the ECD sector we’re always going to be having this fight for recognition,” Plaatjies said. DM