WAR IN EUROPE: YOUR QUESTIONS ANSWERED

Putin’s path of destruction, threat of a nuclear war and power of sanctions unpacked 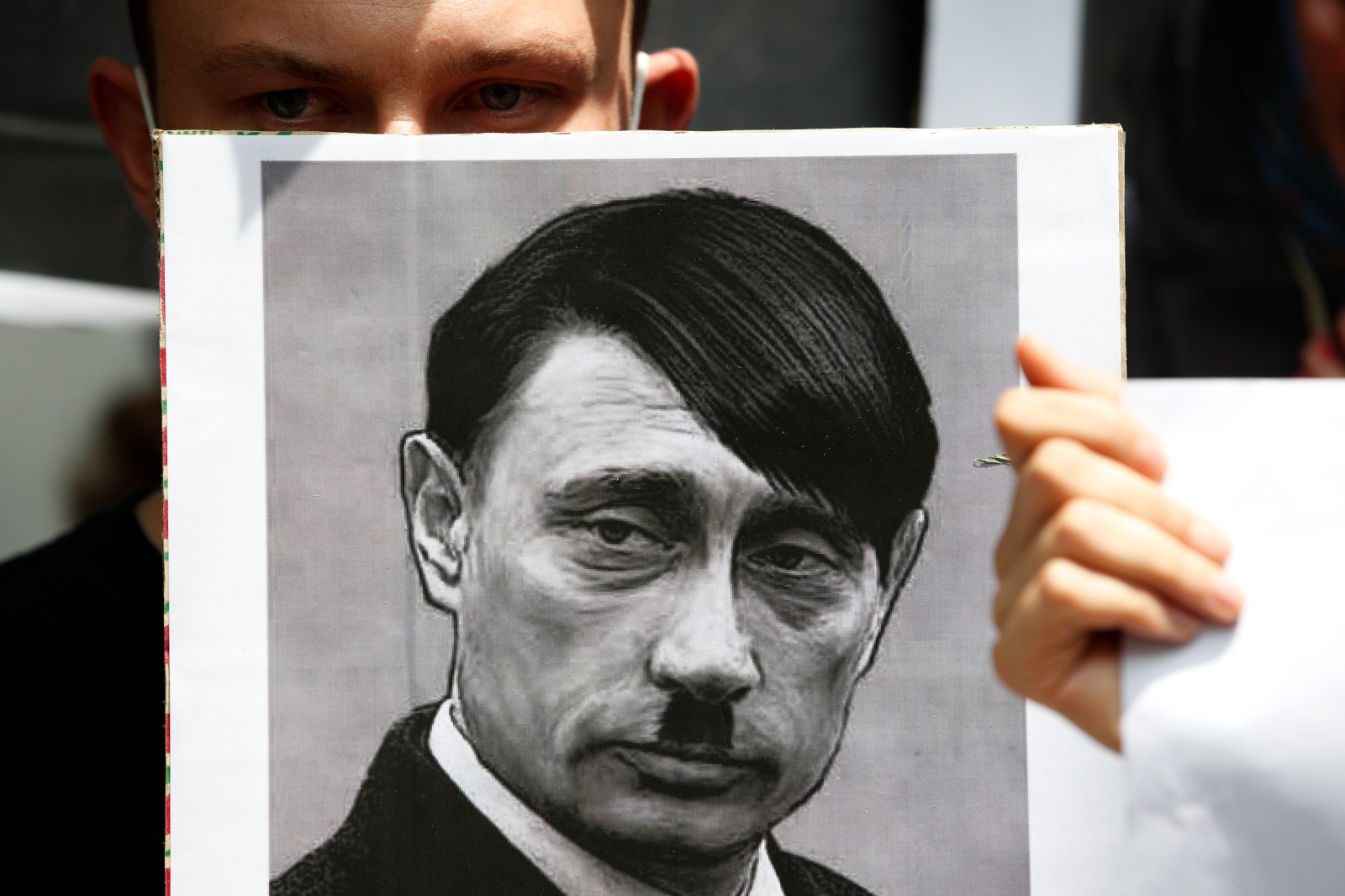 A Ukrainian living in Bangkok holds a photograph depicting Russian President Vladimir Putin as Adolf Hitler during a protest against Russia´s invasion of Ukraine, outside the Russian Embassy in Bangkok, Thailand, 25 February 2022. Russian troops entered Ukraine on 24 February. EPA-EFE/RUNGROJ YONGRIT

An audience of more than 3,000 tuned into a Daily Maverick webinar on Sunday to hear about Russian President Vladimir Putin, his invasion of Ukraine and the effect this will have on the country and the world. Owing to time constraints, not all questions were answered. We provide answers to some of these here.

Does Russia’s invasion of Ukraine exacerbate the threat of nuclear war?

A: On Sunday, 27 February, Putin ordered Russia’s nuclear forces into a heightened state of alert due to “aggressive statements” from the West, signalling that he is prepared to resort to the most extreme measures to crush Ukraine. The US immediately responded, condemning his decision as an “unacceptable” escalation in the conflict.

On Sunday, Daily Maverick editor-at-large Richard Poplak and Bill Browder, the founder of Hermitage Capital Management and author of Red Notice, briefly weighed in on the threat of nuclear war.

Although Putin’s announcement of Russian nuclear forces on high alert does not mean Russia intends to use the weapons imminently, Browder warned the threat is worrisome. He explained that there is no certainty that Putin would step back from using nuclear weapons.

Browder said it’s not unthinkable that Putin would turn to nuclear warfare as an option, if it was his best, or last, chance at staying in power. He explained that Putin is a man who isn’t capable of backing down – “who only escalates, who knows no boundaries” – and would therefore use any means necessary to remain in power until the end of his life.

“I don’t think he has the reservation about doing that because he’s really a sociopath. He’s not a guy who cares about anything other than himself,” said Browder.

Can sanctions truly be effective?

A: Western nations have instituted a number of sanctions against Russia, including a freeze of the country’s central bank’s foreign reserves on 26 February. Russia has also been booted out of the international financial messaging system SWIFT by many nations, and from various sporting bodies.

However, the effectiveness of sanctions is often debated. While they are unlikely to force Putin to back down from his military assault on Ukraine, Western leaders hope they are capable of inflicting enough damage on the Russian economy to help de-escalate the conflict. According to The Conversation, “recent research on sanctions has generally concluded that economic sanctions seldom change behaviour, especially those aimed at disrupting military interventions”.

And they could inflict sufficient pain on Russian oligarchs and the population more generally to wear down Putin’s current support.

But, one of the most powerful blows to the Russian economy so far has been the imposition of sanctions of the Central Bank of the Russian Federation, which plays a central role in the domestic foreign exchange market. The sanctions imposed on Russia’s central bank may lead to the freezing of its $630-billion of foreign-exchange reserves, which could trigger a run on Russia’s banks and currency, as well as shake-up global markets, The Economist reported.

What is Putin’s endgame?

A: It’s difficult to know what’s in Putin’s mind, so we don’t know what his ultimate goal is, or what he is trying to achieve. But, we do know what he has stated publicly. Putin’s speech on Thursday, 24 February, announcing what he called a “special military operation”, indicated that he wants more control over Ukraine, and aims to “demilitarise” the country.

However, Cristian Nitoiu, lecturer in diplomacy and international Governance at Loughborough University London, told Al Jazeera that Putin is “concerned with nothing less than revisionist politics and great power fantasies”.

“The long-term goals of Russia following the end of the Cold War have been to recover the great power status of the Soviet Union, to be seen as equal by the West and to be able to influence political developments in its smaller neighbours like Ukraine, Moldova or Kazakhstan,” Nitoiu told Al Jazeera.

Nitoiu added that, since Ukraine has shown intentions to incorporate itself into the “Western orbit of influence”, Putin’s main objective of his military invasion of Ukraine is likely to place it under the administration of a Russian-friendly government. DM

Read in Daily Maverick: War in Ukraine – A timeline of how we got here