Cape Town’s Southern Line almost back on track as com... 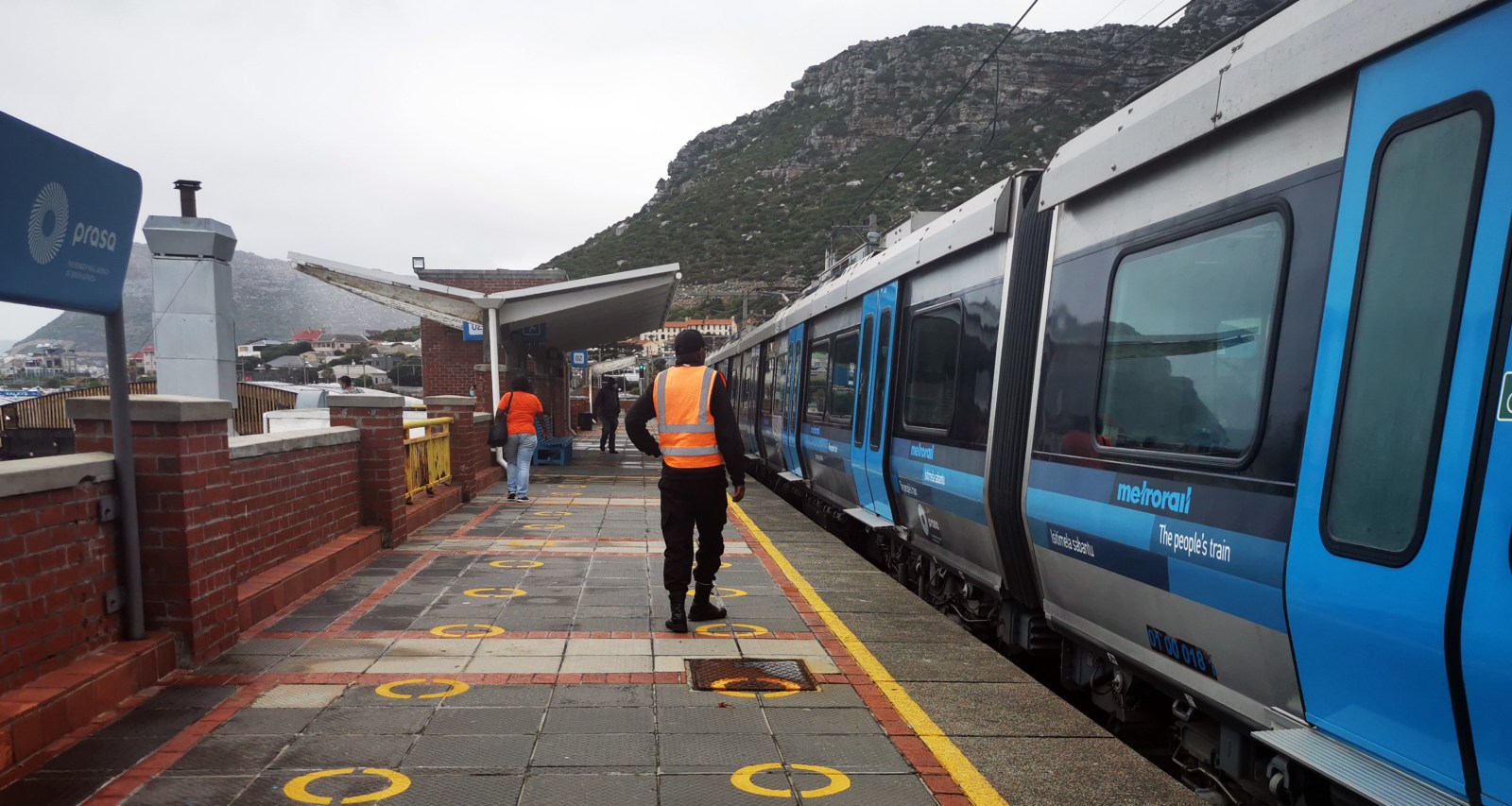 More safety personnel and a new train are some of the features of Prasa’s southern line rail service in Cape Town.

“Saggies,” (softly) says a commuter as one of Prasa’s new blue trains, known as the “People’s Train”, pulls out of Cape Town station on its way to Simon’s Town in the deep south on Tuesday, 11 January.

A week after the long-awaited reopening of the rail service to the last town on the Cape Peninsula, Daily Maverick boarded a train to Kalk Bay to see how Prasa’s new locomotive runs. At the Cape Town station, the display boards were out of order and commuters had to rely on announcements over the PA system for details of their trains.

Acting Metrorail Western Cape spokesperson Nana Zenani told Daily Maverick that due to a devastating fire at the end of 2019, critical cables providing lighting and power to the electronic signage system were burnt.

“We are in the process of fixing all the damage,” she confirmed.

The new blue “People’s Trains” debuted in February 2019 at the Cape Town station. That launch was attended by President Cyril Ramaphosa and then transport minister Blade Nzimande.

The blue trains will operate alongside the older, yellow trains in off-peak hours.

Boarding the 10.45am train to the southern parts of the city, there was much excitement as commuters checked out the new trains, taking photos and watching Prasa personnel inspect tickets and sanitise hands. Before the train departed, Prasa board chairperson Leonard Ramatlakane and Metrorail Western Cape regional manager Richard Walker greeted passengers.

According to Metrorail Western Cape’s Twitter page, Ramatlakane and several Prasa board members visited the Fish Hoek and Simon’s Town areas to check on repair work at the Glencairn station.

During the smooth ride, commuters were heard talking and laughing among themselves about Parliament’s lack of insurance in the wake of the fire. Others had their phones out and were doing what people around the world do when travelling on public transport. There were no hitches as Prasa staff asked commuters to physically distance while sanitising hands and inspecting tickets.

One woman remarked, “It’s good they have security.” En route to Simon’s Town, families hopped aboard the train, getting off at the popular beaches of Muizenberg, St James and Kalk Bay to enjoy the last of the school holidays. Some got up to take pictures of the passing beaches, one sat reading the Daily Voice newspaper while another passenger napped in a corner.

Zenani confirmed to Daily Maverick the trains would replace the present older fleet which had been hard hit by vandalism, theft and arson — much of it on the central and northern lines, including Cape Town station itself.

Vandals have also begun targeting the southern line, which had been left largely untouched in comparison with the central and other vital lines. Daily Maverick reported in October 2021 on vandalism at the Muizenberg station in False Bay that caused damage of more than R1-million.

After the southern line reopened fully last week, Metrorail said that it would be laying charges of malicious damage to property after a group of youths stoned the new train at Steenberg station.

“The stones caused damage to the side window of the driver’s cabin, which will now have to be replaced,” said Zenani at the time. News24 reported on Tuesday that the City of Cape Town was offering a R5,000 reward for information leading to the arrest and conviction of the stone-throwers.

While the ride there went smoothly, the return journey to Cape Town’s CBD was far from pleasant. For a start, the ticket office was closed. When Daily Maverick attempted to buy a ticket, a security guard said because the office was closed, tickets needed to be bought at the Cape Town station. An older train was running to Cape Town station and the contrast was obvious. It was noisy and, although clean, some of the seats had been damaged.

Between Mowbray and Cape Town, the train made several unexplained stops. There was also limited security, with guards visible only at Retreat station — on the platforms, but not on the train. It was a far cry from the morning’s increased security on the new “People’s Trains”. DM