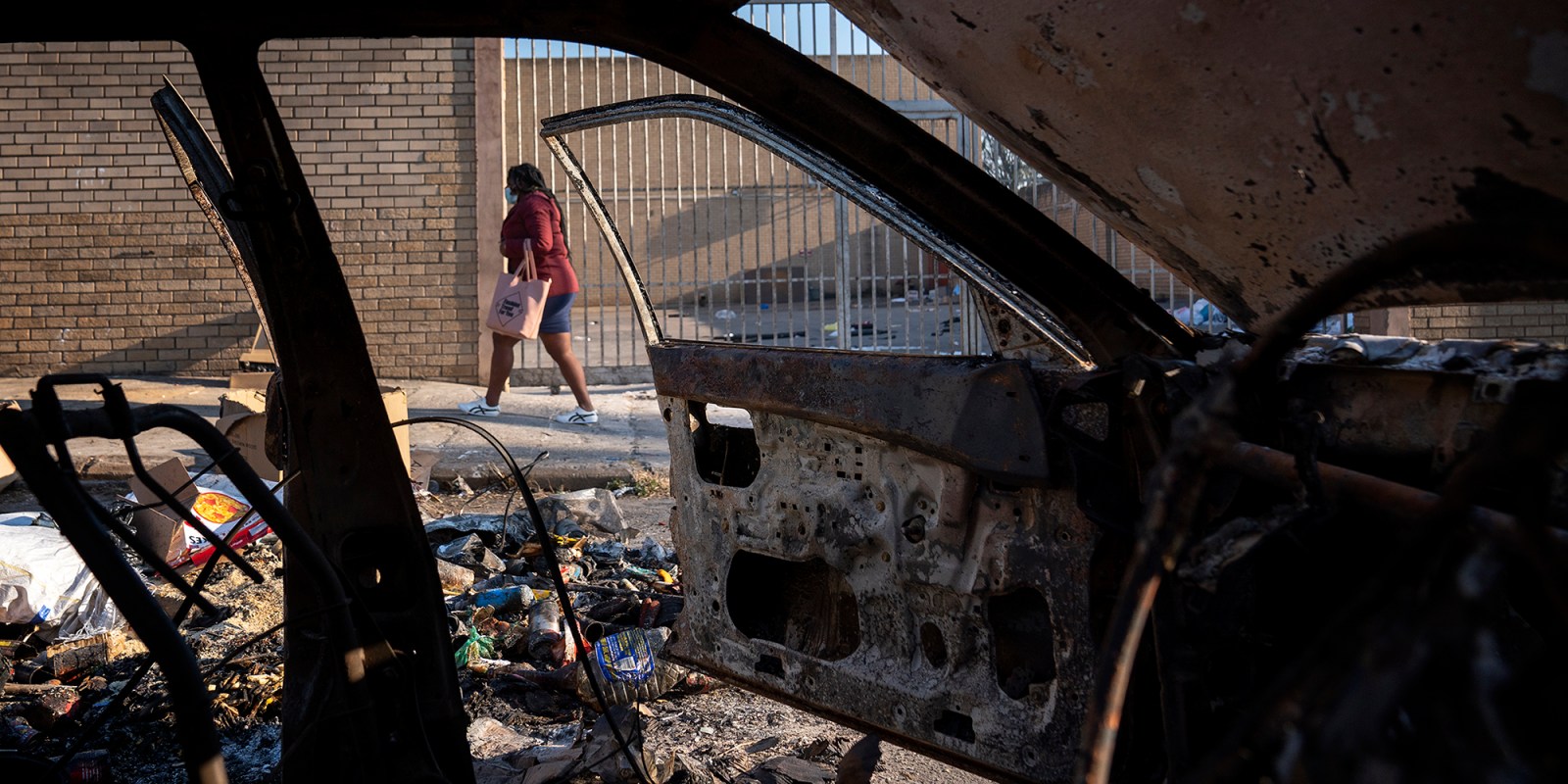 A woman walks past a burnt car following riots and looting in parts of Gauteng and KwaZulu-Natal in the aftermath of the incarceration of former president Jacob Zuma in July 2021. (Photo: Shiraaz Mohamed)

Pietermaritzburg resident Mdumiseni Khetha Zuma, one of the thus far alleged 18 ‘instigators’ of the devastating civil unrest that rocked KwaZulu-Natal and Gauteng in July, made his second appearance at the Pietermaritzburg Magistrate’s Court on Monday.

Zuma (it is not known at this stage if there is any relation to former president Jacob Zuma) has been accused of inciting looters to destroy and torch the city’s popular Brookside Mall. He cut a nervous figure in the dock, fiddling with his mask, wiping his face and adjusting his long-sleeved top before finally settling his hands behind his back.

At his first appearance last week, Zuma could not be named or photographed as he was yet to appear in a police line-up. Daily Maverick understands he was identified by two witnesses when that line-up finally took place.

The 35-year-old was arrested on 28 August. He faces charges of contravening section 17 of the Riotous Assemblies Act by inciting others to “commit public violence during the course of the unprecedented public violence which erupted following the imprisonment of former president Mr J.G. Zuma”, according to the charge sheet.

The charge sheet continues that Zuma “made a video recording which was circulated on the social media platforms which where [sic] he was informing his comrades that the Brookside Mall was closed at 18h00 on 11 July 2021 and if they were opened in the morning, they will enter and destroy everything. On 12 July 2021, the Brookside Mall was burnt down.”

The matter was postponed to 14 September when Zuma’s bail application is expected to start. The State told the court on Monday that it needed more time for investigations.

Brookside was extensively looted and allegedly torched on 12 July. Black plumes of smoke were visible from the nearby highway, which had to be shut as a result of the unrest. Looters ransacked the shops while the fire was still raging.

The Shoprite Group has reportedly said it will rebuild the mall.

The unrest allegedly started as a protest against the jailing of Jacob Zuma, who started serving his sentence at the Estcourt Correctional Centre in the early hours of Thursday, 8 July.

Zuma was sentenced to 15 months’ direct imprisonment for contempt after failing to appear before the Zondo State Capture Commission, as directed by the Constitutional Court, to answer to allegations of corruption from dozens of witnesses.

The Department of Correctional Services announced on Sunday that Zuma had been granted medical parole – although he remains in hospital – and would complete his sentence in the “community corrections system”, meaning he could serve out the remainder of his sentence from home. Zuma would have been eligible for “normal” parole by November.

The damage to the fiscus from the July violence in KZN alone has been estimated at R20-billion, and about R50-billion nationally.  Police Minister Bheki Cele has said 359 people lost their lives during the unrest.

On Tuesday, another of the alleged KZN instigators, previously convicted student activist Bonginkosi Khanyile, will hear the outcome of his bail application at the Durban Magistrates’ Court.

Khanyile is a KZN resident with a home in Umlazi, but is studying in Johannesburg. He has been charged with incitement and contravention of disaster management regulations. The State opposed bail.

Zuma and Khanyile join several other alleged instigators who have already appeared in court on charges of incitement to commit public violence, which are directly related to the July unrest. According to the National Prosecuting Authority they are: Sibusiso Mavuso, Clarence Tabane, Ngizwe Mchunu, Ike Khumalo, Bruce Nimmerhoudt, Nomaswazi Majozi and Themba Mnisi. DM