Minutes before midnight, Jacob Zuma’s foundation announced: ‘Dear South Africans and the World. Please be advised that President Zuma has decided to comply with the incarceration order.’

Jacob Zuma’s motorcade sped out of his Nkandla homestead at about 11.20pm on Wednesday, as he ostensibly rushed to hand himself over to the Correctional Services in order to avoid arrest.

It is understood that the president being transported by his state-sponsored VIP protection was agreed upon by police leadership at a provincial and national level.

Minutes before midnight, Zuma’s foundation announced: “Dear South Africans and the World. Please be advised that President Zuma has decided to comply with the incarceration order. He is on his way to hand himself into a Correctional Services Facility in KZN. A full statement will be issued in due course.”

Fifteen minutes later, the spokesperson for the police ministry, Lirandzu Themba, tweeted that Zuma was in custody, in compliance with the order of the Constitutional Court.

The motorcade arrived at the recently refurbished “state-of-the-art” Estcourt Correctional Centre at about 1.20am. At 2am, the Department of Correctional Services (DCS) issued a statement confirming Zuma had been admitted.

“Mr Zuma will be taken through all the admission processes as per DCS regulations. Other relevant prescripts pertaining to admitting and orientating newly incarcerated persons will also be followed and executed.

“Details about the appropriate classification, prerogatives and incarceration conditions can only be determined at the completion of the assessment process to be undertaken by relevant authorities within the employ of DCS.

“Keeping inmates in safe and secure custody remains cardinal to Correctional Services and we remain committed to this cause.”

The possibility of an arrest had left many South Africans teetering on the edge of their seats for the past eight days. On Tuesday last week, the apex court found the 79-year-old in contempt of its order earlier in the year that he appears before the Commission of Inquiry into State Capture. He was subsequently sentenced to 15 months of direct imprisonment.

He was given until Sunday to hand himself over, failing which the minister of police and the national commissioner of police were ordered to ensure his arrest by midnight on Wednesday.

On Saturday, the Constitutional Court agreed to hear Zuma’s application for rescission, with a date set down for Monday, 12 July.

On Tuesday, an urgent application that Zuma brought before the Pietermaritzburg High Court for a stay of the order for arrest and committal pending Monday’s hearing was heard, but judgment was reserved until Friday by Judge Jerome Mnguni, who expressed disquiet at a lower court being asked to stay an order from the apex court.

Zuma maintains that his age, “health condition” and the Covid-19 pandemic would translate into a “death sentence” should he be imprisoned.

The special units and myriad officers that had been assembling in the north of KwaZulu-Natal did not make a show at the homestead on Wednesday, mitigating the possibility of violence that many of Zuma’s supporters, including his son Edward, had been repeatedly threatening should he be arrested.

Instead, confusion was the order of the evening, as exhausted media tried to offer a blow-by-blow account sans the input of authorities, who remained tight-lipped to the point of vexation.

A thoroughly sozzled Edward Zuma and about 40 diehard supporters – an embarrassment when compared to the multitudes that gathered on Saturday and Sunday – took it upon themselves to guard and then block with vehicles the main gate leading into the Zuma homestead at about 9.30pm, well into curfew. Gripping a smoothly carved stick, Edward Zuma led the squad in toyi-toying and singing Struggle songs. 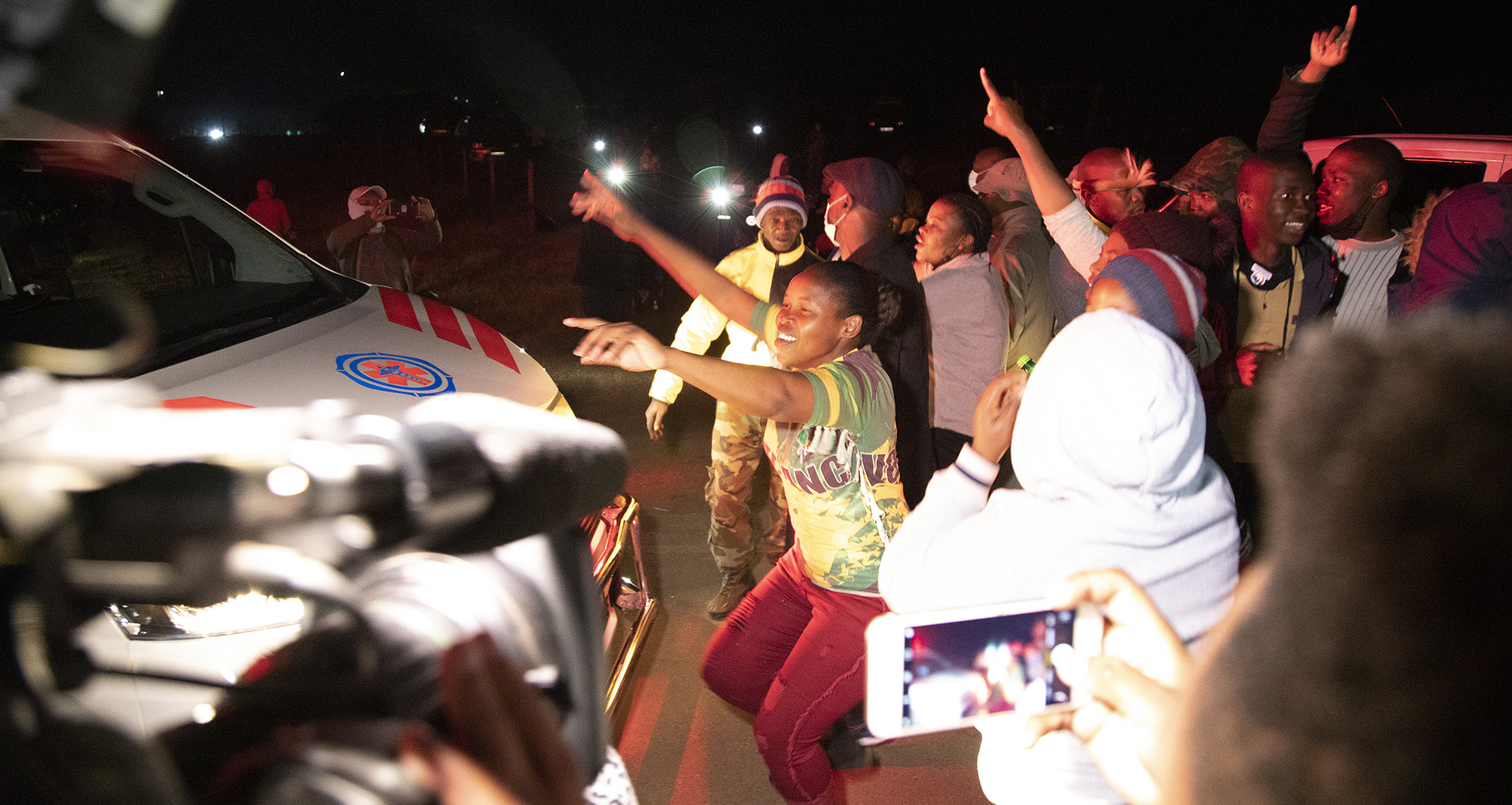 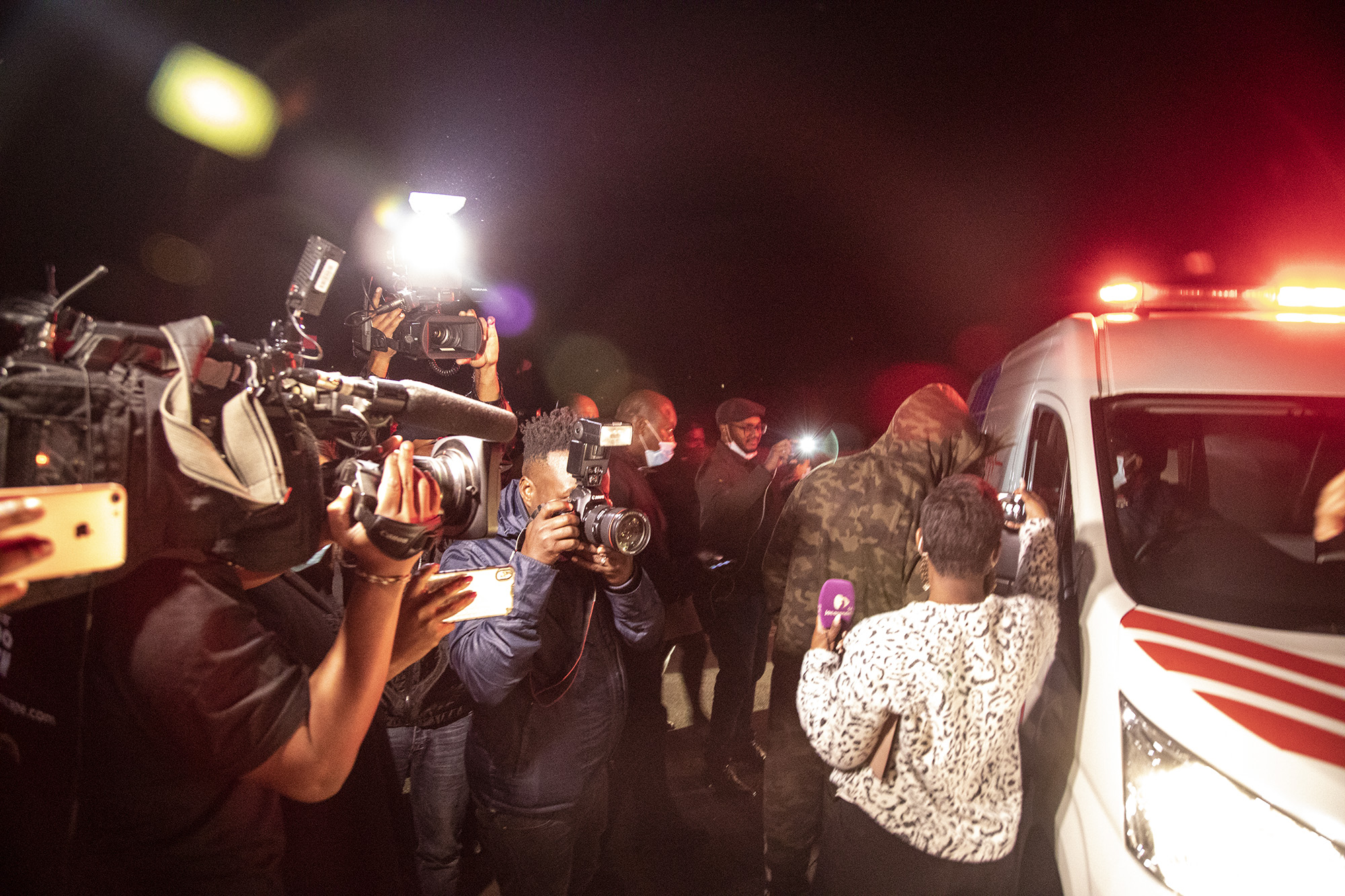 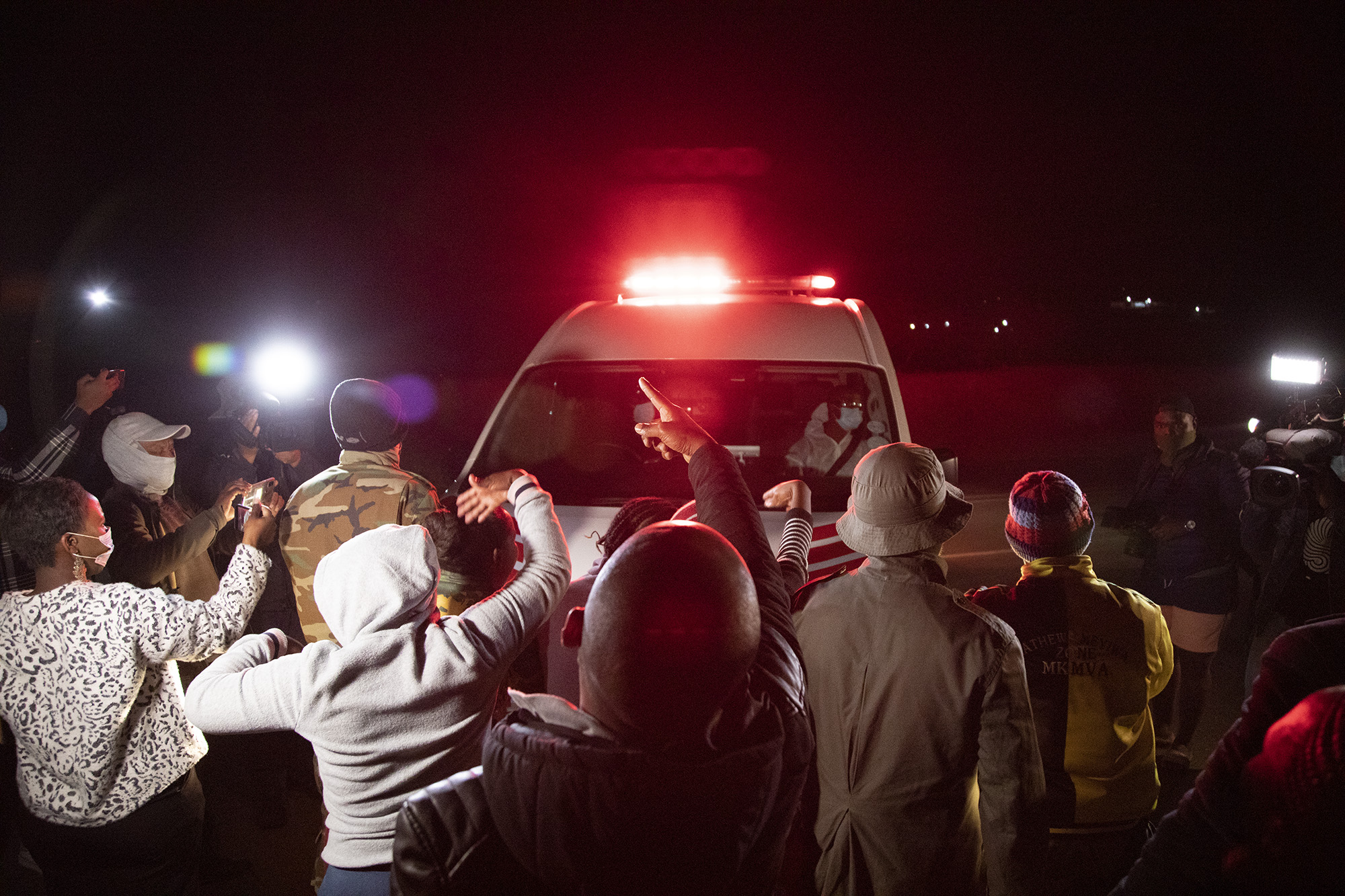 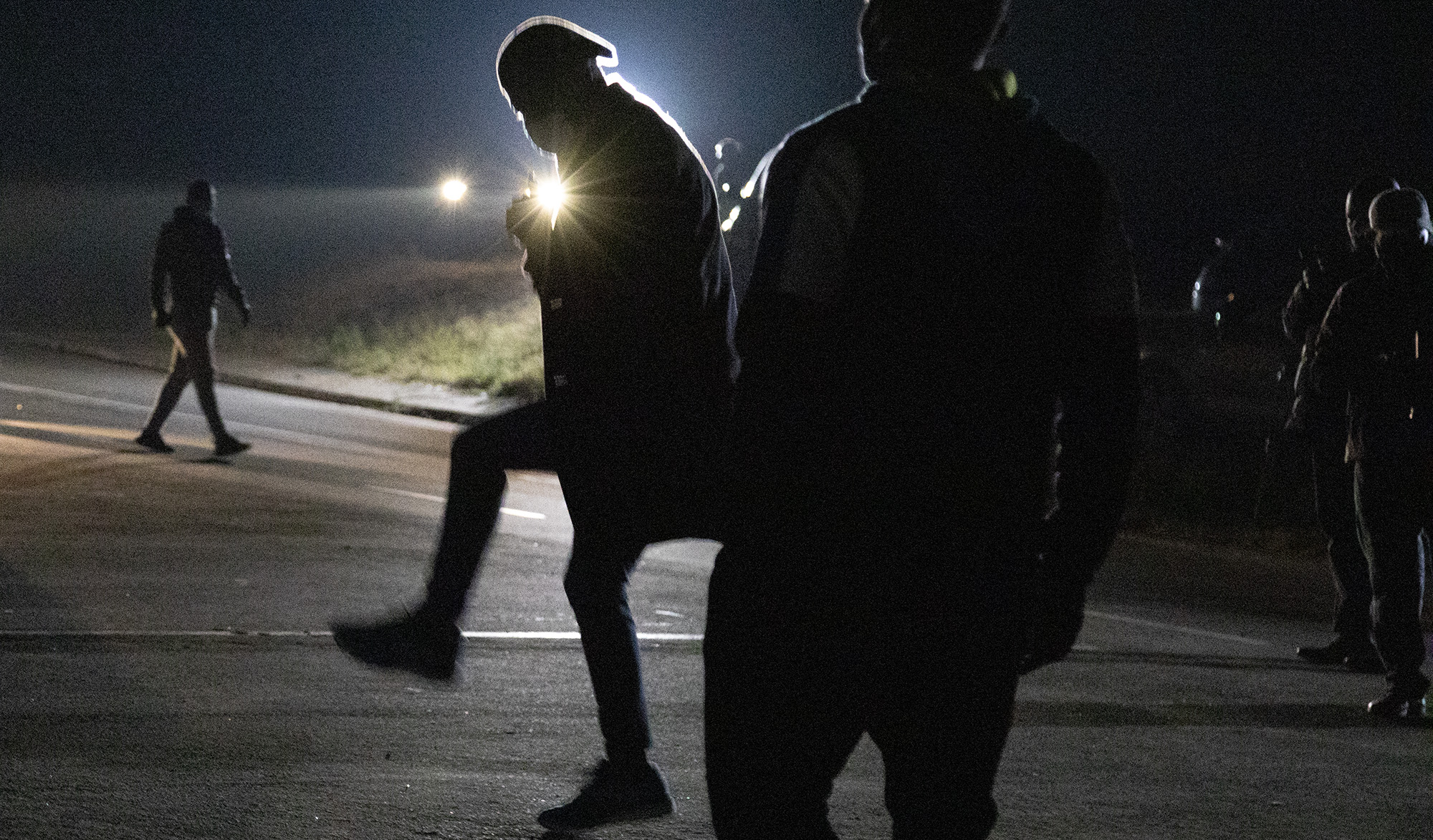 Prior to this, caressing to the same stick, Edward Zuma told journalists that he was “flabbergasted at our judiciary. It’s a mess.”

Asked how he felt about the clock ticking down to his father’s arrest, Edward responded that the clock should “unclick itself”.

At 10.30pm, a Pietermaritzburg-based private ambulance arrived outside the homestead, with three paramedic vehicles alongside. Edward told the driver to park on the side of the road. He informed journalists that if there were a life-threatening situation inside his father’s home that necessitated an ambulance, he would have known about it. Twenty minutes later, he told the supporters that the ambulance had to be allowed into the property. Apparently, there was “an old woman” who needed help.

Once Zuma’s convoy had left the homestead, Edward denied that his father had left with it. Earlier, he would not confirm that the former president was even in the province.

“We had to give access to the four ministers who spent hours here so they could leave,” he lied.

Adding to the confusion of the evening was a letter written to the Constitutional Court by Zuma’s legal team, incorrectly reported by some media to be an application, and the notion that the justices had urgently gathered to discuss it.

“You have issued directions that my client’s application for rescission of judgment be heard on Monday, 12 July 2021. However, the directions do not indicate the status of the committal orders… pending the outcome of the rescission application,” the letter stated.

“We lodged a high court application to seek a suspension order of the Constitutional Court committal orders. The presiding Justice Mnguni indicated that he would deliver judgment on Friday, 9 July, but no holding position was ordered pending the delivery of his judgment.

“The SAPS has indicated that it will be executing the orders of the Constitutional Court tonight by midnight despite the pending judgment on whether the execution of the committal orders should be suspended.

“There is prejudice to the life of our client in the event of the judgment of the High Court ordering a suspension of the committal orders, alternatively the Constitutional Court rescinding the orders.

“We understand that the Constitutional Court may direct the suspension of its orders, which if granted would be binding on the High Court, to prevent our client from being arrested prior to all legal processes being finalised. We await your urgent response.”

The letter was not responded to.

A leader of the so-called Radical Economic Transformation forces in KwaZulu-Natal told Daily Maverick that while no “formal” plans to protest had been put in place, there would be “spontaneous” groupings in the province on Thursday to object to the arrest.

“Jacob Zuma is a man who is very loved. We don’t have to organise protests for him. People will protest because they love him.” DM