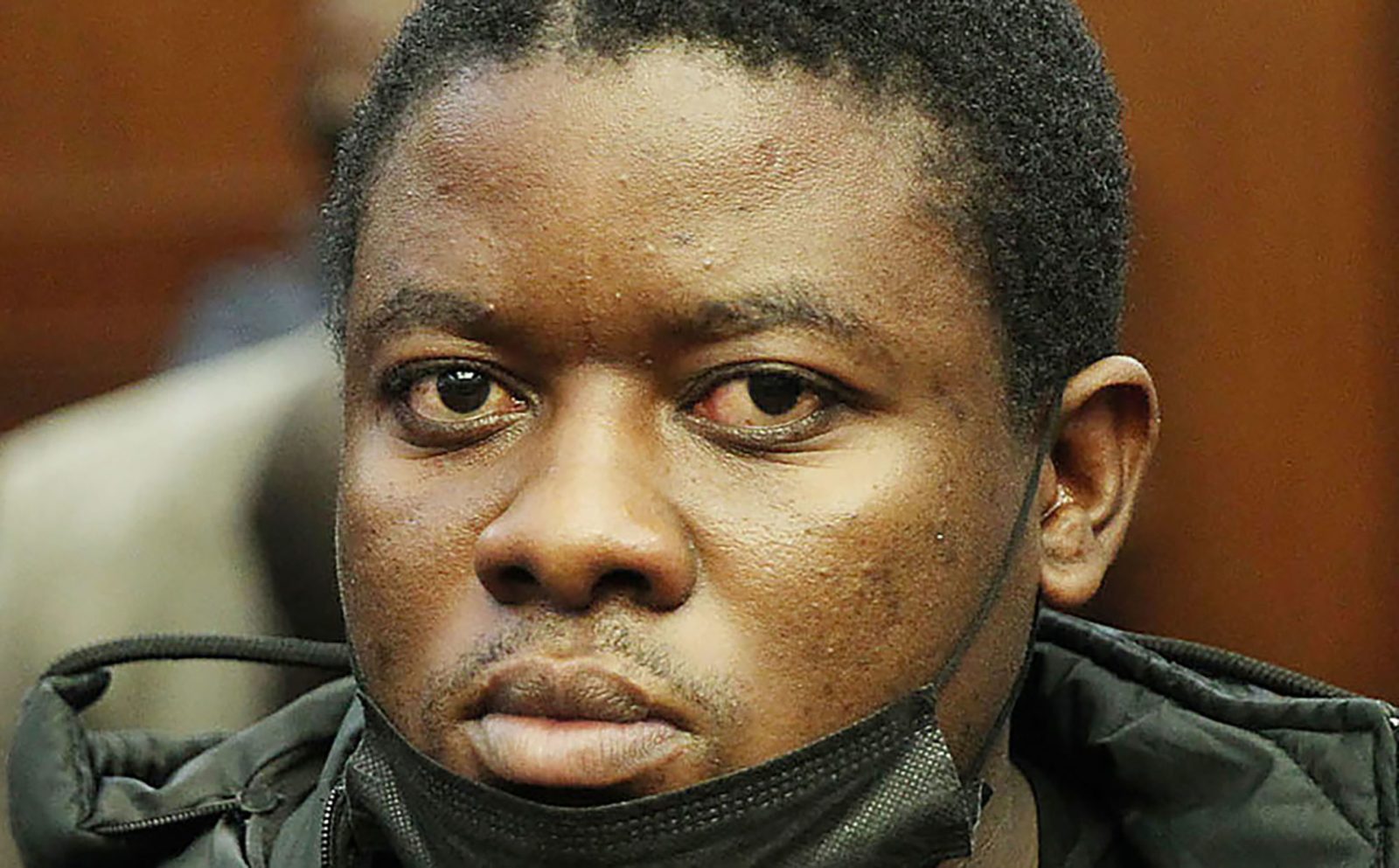 Bonginkosi Khanyile, one of the alleged 18 instigators of the violence that took place in KZN and Gauteng in July, in the Durban Magistrate's Court on Tuesday, 31 August 2021. (Photo: Mandla Langa)

Moments before one of the alleged instigators of the July civil unrest appeared in the Durban Magistrate’s Court on Tuesday, a supporter threatened that ‘hell will break loose’  if his friend was not released on bail.

“We are very angry as a family, we are very bitter in how things are unfolding with the issue of Bonginkosi Khanyile, and we are saying they must release him here today because if they don’t release him, hell will break loose. I am telling you now that if they don’t release him today, hell will break loose, we are not going to accept this thing to happen in our country,” said Philani Nduli, the spokesperson for Khanyile and his family.

@SAPoliceService @PresidencyZA This Guy is threatening the courts of law and the State. We can’t tolerate such talk anymore. Thousands of jobs were lost from such talks…🙆🙆🙆#BonginkosiKhanyile #SphithiphithiEvaluator pic.twitter.com/m8bUtzihaG

Nduli, who is also running Khanyile’s Twitter account while the 31-year-old is incarcerated at police holding cells, said the state was using “rogue” measures to stop Khanyile’s supporters and deny him his freedom. These measures included “looking into his bank accounts” and “harassing his family members”.

“We are seeing the South African state going back to the old days of apartheid,” he said.

The court last week heard that proceedings themselves were under threat as Khanyile’s supporters had vowed to free him, even if it took violence to do so.

Nduli’s utterances were made to journalists outside courtroom 12, on day two of Khanyile’s bail bid. The alleged instigator is seeking to be released before trial on the strength of being a father of four minor children, not being a flight risk, and having no intention to interfere with witnesses.

The state told the court last week that Khanyile’s bail application was being dealt with in terms of Schedule 5, as he has a previous conviction on a Schedule 1 offence.

Khanyile was arrested in September 2016 during running battles between police and Durban University of Technology students that took place during the height of the Fees Must Fall protests.

In August 2018, he pleaded guilty to public violence, possession of a dangerous weapon — a slingshot — and two counts of failure to comply with police orders.

He was initially charged with incitement to commit public violence, illegal gathering, possession of dangerous weapons (a slingshot), obstructing traffic, causing a nuisance on public roads and possession of explosives.

In January 2019, Khanyile was sentenced to three years in prison, suspended for five years, or to payment of a fine of R5,000.

Lieutenant colonel Anton Booysen again took the stand on Tuesday. Booysen is the acting provincial commander of the Hawks’ Crimes Against the State Investigations in KZN, and has 43 years of policing under his belt.

He challenged the defence’s argument of Khanyile having to be released on bail to help care for his children.

Booysen said that of the about R5,000 stipend Khanyile had earned each month between January and June, while an intern at the cooperative governance and traditional affairs department, very little was spent on actually caring for his family.

“Considering the expenditures, the applicant was left with just over R7,000,” said Booysen.

Seasoned state prosecutor Advocate Yuri Gangai asked Booysen if the R7,000 was the amount left for the care of Khanyile’s family, to which Booysen replied in the affirmative.

Booysen again emphasised to the court, as he had done last week, that Khanyile had motive to evade trial if released on bail. There were two main reasons for this, he said.

The first was that given he had a prior conviction, Khanyile was facing a stiff jail term if convicted. His previous suspension would also “probably be reviewed” if he was found guilty on the latest charges, said Booysen.

Magistrate Vincent Hlatshwayo asked if these issues could not be addressed by way of bail conditions. But Booysen wasn’t convinced.

“Given his financial situation, he wouldn’t be able to pay a big amount [for bail]. If someone else paid on his behalf, the money wouldn’t be his to [forfeit]. As for reporting to a police station on a daily basis, he could start doing it and create the impression that he was complying and then disappear. And if he has to report every day in Johannesburg, I have learned that that is very rarely enforced.”

Khanyile is currently a law student at the University of the Witwatersrand, having obtained various other qualifications prior.

The state has put forward video evidence showing Khanyile allegedly inciting crowds while at a bus stop in eThekwini, to continue looting and blocking roads until former president Jacob Zuma was freed from prison. The videos were allegedly shot during the July unrest.

Trying to refute the state’s assertions that Khanyile was an “absent father”, defence attorney Masibonge Matomane handed in affidavits from both of the mothers of Khanyile’s children, with photographs attached.

Gangai said he had no objection to the affidavits being entered into evidence at this late stage, but brushed them off as being “about two lines” each.

When continuing, Matomane said that Khanyile was not a flight risk, and that the “issue” of his place of residence had been dealt with.

“He resides at … Umlazi. And he does have an alternative address in Johannesburg where he was arrested. We also understand the state has made arguments that there are other addresses but no evidence placed before the court to prove such. We state that it would be in the interest of justice that he be released on bail.

He has strong family ties within this court jurisdiction in that he is originally from Durban, his family and children are here.”

Matomane said that as an “activist”, Khanyile used his right to freedom of expression “and in so doing will be vocal about issues that may not be tasteful to other people”.

“But this does not mean that the interest of justice does not permit he be released on bail.”

Khanyile would be able to raise R500 for bail, given his earnings, said Matomane.