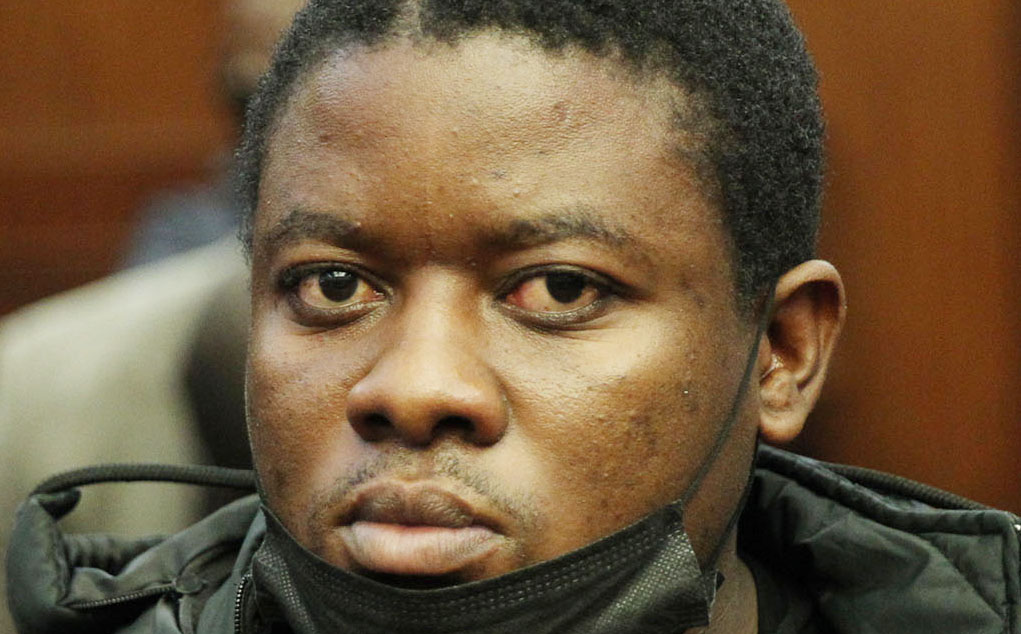 On Monday, KwaZulu-Natal Fees Must Fall activist and current law student Bonginkosi Khanyile appeared in court on charges relating to the civil unrest that shook the province last month. His appearance coincided with police and security officials being on high alert in the province and also Gauteng amid warnings of a possible second wave of unrest.

With more than a measure of anger in his eyes, Bonginkosi Khanyile made his way into the dock of the Durban Magistrate’s Court on Monday pressing a large folded blanket to his chest before discarding the item and sitting down.

“Speak nice, what’s wrong with you?” Khanyile snapped when a court orderly asked him to take his hands out of his pockets when the magistrate strode in.

The well-known KwaZulu-Natal Fees Must Fall activist and current law student was making his first appearance on charges relating to the civil unrest that shook the province last month. He was arrested on Friday.

The eight days of disgrace that included looting of malls, warehouses, schools and arson cost the KwaZulu-Natal economy over R20-billion in damages and led to the loss of over 300 lives — the majority of them looters.

Khanyile is facing five counts, including incitement to commit public violence and contravention of lockdown regulations. The crimes were allegedly perpetrated on 10 and 14 July in KwaZulu-Natal.

He is one of a clutch of alleged instigators that have been rounded up by police in the past month as the state tries to make amends for what many claimed was a poor response to the violent unrest, which started as a show of support for former president Jacob Zuma after he was sentenced to 15 months in jail for contempt of court.

While Khanyile’s Twitter account remained relatively tame but active throughout the unrest, he was videoed speaking to crowds in the eThekwini region, with one such interaction appearing to incite violence.

[WATCH] FeesMustFall activist @Khanyile_BG on the ground mobilising for the #FreeZuma campaign.

According to Khanyile, this campaign will intensify even outside KwaZulu-Natal. pic.twitter.com/BnveSaXyQ4

At least 10 police officers moved in and outside the courtroom as Monday’s proceedings continued, with others patrolling the court itself, a response to threats of a renewed wave of violence under the guise of a national shutdown that authorities have said they are monitoring and will, this time, be prepared for.

Barring a group of eight supporters, the masses that had been encouraged to turn up in support of Khanyile were nowhere to be seen.

Veteran prosecutor advocate Yuri Gangai informed the court that the state would be opposing bail when Khanyile appears again on Thursday 26. Khanyile is currently being held at Durban Central Police Station.

The Durban University of Technology graduate gained prominence during the violent 2016 Fees Must Fall unrest. He was sentenced in 2019 for various crimes committed during the riots, and eventually ended up being placed under house arrest for three years.  He pleaded guilty to charges of public violence, possession of a dangerous weapon — a slingshot — and two counts of failure to comply with police orders.

Testifying in aggravation of sentence at the time, colonel Langa Mhlongo told the court that Khanyile showed no respect for police and had incited other students to “attack” officers. Mhlongo said Khanyile had also been quoted in the media saying he would only be pleading guilty “to confuse the enemy”.

Police and the defence force are on high alert across the country as calls have been made via social media for the national shutdown.

But in KwaZulu-Natal, roads were quiet on Monday, and barring fewer taxis, things were running as normal. There had been reports of protests on Umgeni Road in the early hours, but the situation was rapidly brought under control and debris scattered on the road by protestors was cleared.

Whether this incident was related to the “national shutdown” could not be determined at the time of publication. Police did not answer Daily Maverick’s calls. Protest action, which often turns violent, is a common occurrence in the province.

A planned march to the ANC KZN headquarters in the city centre had not materialised by 2pm.

In some areas of eThekwini that were particularly affected by violence and looting in July, police and community patrol groups have banded together to ensure the safety of residents, property and police stations — which are alleged to be targets of the “national shutdown”.

Community patrol groups in the Berea area of eThekwini, for example, have been asked by police to add their stations to drive-by patrols. Community patrols were mobilised during the unrest to protect lives and properties when “overwhelmed” and unprepared police did not respond to the unrest. The military was deployed –  after the destruction of property and loss of lives.

In Gauteng, which was also touted as being part of the renewed unrest, things were also calm by 2pm, but citizens and taxi operators were again on high alert to “defend” their malls and communities.

“Last night in Mokhele, there was an attempt to loot a spaza shop. We got a call that there was a break-in at the spaza, owned by a Somalian national. When we got there, they had already taken goods. We put our heads together trying to figure out where the criminals could have gone.

“When we were done thinking we bumped into someone carrying a box on his head, we confronted him and asked where he bought the goods, he told us that he found people looting. In fact, it was not looting, the shop owner had left his shop to use the toilet and there were people waiting to pounce on him and that is how they managed to get the goods.

“We managed to get the stolen goods and took the man to the police station. The shop owner was able to get his goods back. We were able to protect that shop and the community can see that we don’t like what happened.” DM