Civil unrest and a state of inconsistency: Deal urgently with the root causes of a violent society 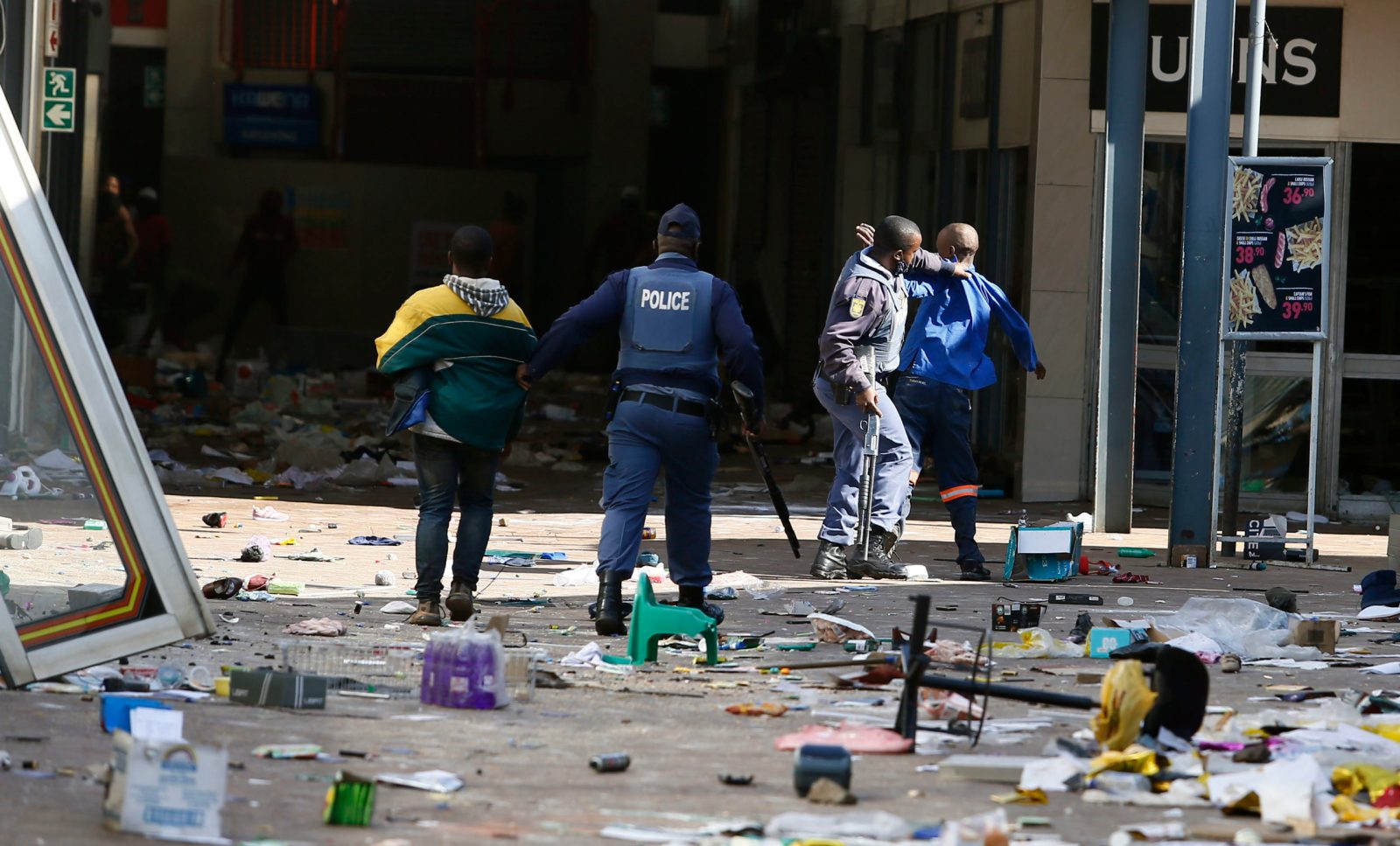 Police arresting some of the looters following sporadic looting at Letshoho mall in Katlehong.Photo:Felix Dlangamandla/Daily Maverick

The lawlessness and anarchy didn’t start over the past weekend, it started when officials and elites were allowed to ride roughshod over the poor and disenfranchised without sanction. The rule of law means nothing if only selectively applied and used only to subdue the masses of our people.

Looking at the scenes of unrest unfolding around the country, a quote by Noam Chomsky comes to mind: “So long as violence from below is condemned while violence from above is ignored, you can bet that the former will continue.”

The #FreeZuma protests are merely the spark that ignited the powder keg that is South Africa’s inequality and an inconsistent application of the rule of law. It cannot be that state officials and those in power have continuously thumbed their nose at the law by getting away with acts of corruption at the expense of the country’s citizens, with no consequence.

Even when the country was brought to its knees by Covid-19, state officials and their cronies continued to pillage state coffers whose sole purpose is to provide constitutionally mandated services to the country, such as a functional public health system able to respond to a pandemic, safe sanitation in schools so children don’t go to school to die, and dignified housing so generations of children are not forced to grow up in the squalor of informal settlements.

For all of our short life Maverick Citizen has been reporting and editorialising about how poverty and inequality are at breaking point. We have covered numerous reports from the UN Special Rapporteur on Extreme Poverty, to the NIDS-CRAM surveys; from the government denying children food in schools by stopping the National School Nutrition Plan despite a court order to reinstate it, to the collapse of the public health system in the Eastern Cape. We have also reported on the many civil society organisations warning of an imminent tipping point.

We have written about how South Africa’s growing inequality is reflected in our public health system and that our hunger crisis is being exacerbated by Covid-19, and we have called on the government and ordinary South Africans to not look the other way.

Yet here we are, with everybody clutching their pearls at the uneasy scenes in Gauteng in KwaZulu-Natal.

Of course it is also necessary to point out that business and the well-heeled are not without a part in this crisis we face. With the Competition Commission having flagged, since 2020, how the price of essential food was increasing at an alarming rate while people were losing jobs, is it any wonder that we are here? How are people who were barely making a living wage meant to pay for food and essentials without a salary?

It is important to understand that this spate of unrest is made up of three kinds of people:

Speaking about the current crisis on Newzroom Afrika on Monday night, former statistician-general Dr Pali Lehohla expressed concern at the government’s skewed priorities, particularly concerning the findings of the latest NIDS-CRAM survey, saying that it “is not funded by Treasury and is now going to fold and that’s the only survey that tells us what is happening at household level” especially in this era of Covid. He says NIDS-CRAM surveys (there have been five so far) are tools which, if taken seriously, could have been used by the government to mitigate the current socioeconomic disaster. But he complains that the government’s relationship with science and evidence is an inconsistent one.

For example, Lehohla said the latest report showed that between 2020 and 2021, 900,000 children had dropped out of the basic education system, something that would put further strain on the country.

According to the stats, between the ages of 15 and 21 there is already a significant number of young people who are in the labour market as a result of an early exit from the education system. With limited basic education and no skills, they are bound to be frustrated, making them vulnerable to extreme acts of survival.

While poverty and hunger are not an excuse for lawlessness, we have to look honestly at Covid-19 and recognise that it has plunged people into critical levels of hunger, levels that can only lead to desperate acts for survival. How does one reason on an empty stomach while watching the rich get away with murder?

The government has acted like lame ducks while dangerous statements were made by people like Carl Niehaus, the Zuma children and Mzwanele Manyi, and so cannot claim ignorance that things have got to this. Where was the law when they were inciting violence on public platforms to no rebuke? Is it because, like Zuma, they are still referred to as, and considered, “comrades” by most ANC leaders?

This is not just a security issue, and employing a tactic of sheer brute force, in the face of a cauldron bubbling over because people are no longer accepting the unacceptable, will soon be short lived. I assume the President knows this and that members of his cabinet and advisory committee will place the wellbeing of our people at the centre of their efforts to not only bring about order but address the indignity that is poverty. It is a massive task but there are many in civil society who have been putting their hands up to be part of a sustainable way forward – perhaps the time has now come to listen and accept the help.

The truth is that the lawlessness and anarchy didn’t start over this past weekend, it started when officials and elites were allowed to ride roughshod over the poor and disenfranchised without sanction. The rule of law means nothing if only selectively applied and used only to subdue the masses of our people.

I have to ask though; how long did we think we could hold this precarious fort of inequality before “the poor no longer had anything to eat other than the rich?” DM/MC