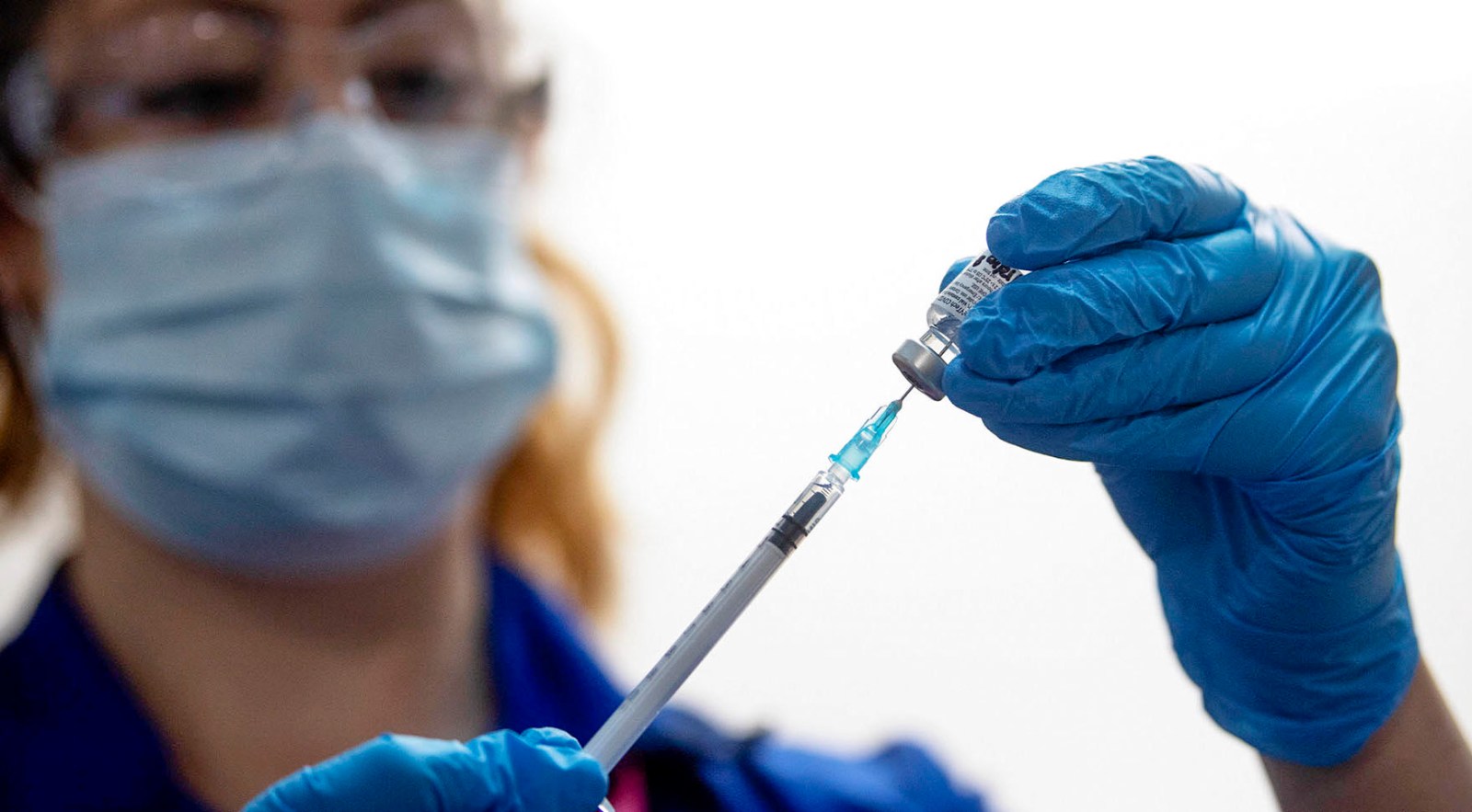 South Africans appear to be among the most vaccine enthusiastic people on earth. In the latest NIDS-CRAM survey out today, July 8, almost 80% of the respondents surveyed said they would accept a vaccine. (Photo by Victoria Jones – Pool / Getty Images)

South Africans appear to be among the most vaccine-enthusiastic people on Earth. In the latest Nids-Cram survey out today, 8 July, almost 80% of those surveyed said they would accept a vaccine.

“Vaccine acceptance may be becoming a social norm,” according to lead researchers Nic Spaull and Reza Daniels. The vast majority affirmed that: “If a vaccine for Covid-19 were available, I would get it.”

As of Tuesday, 6 July, 3.6 million South Africans had had a single vaccine shot, but if the programme continued at weekends, the number would be much higher.

“Approximately 1.3 million more vaccine doses could have been administered in May and June 2021,” says Spaull. Weekend vaccinations grind to a halt, with only 4% of total jabs administered. Private and public sector health managers say they do not have enough vaccinators.

“It’s like fighting a raging fire and sending the firefighters home at the weekend,” says Spaull. South Africa is behind its goal of reaching herd immunity to vaccinate 40 million people, or 67% of the adult population by the end of the year. Wealthy countries are already vaccinating children and have plans for booster shots, which are likely to be necessary as the coronavirus mutates to form new variants. 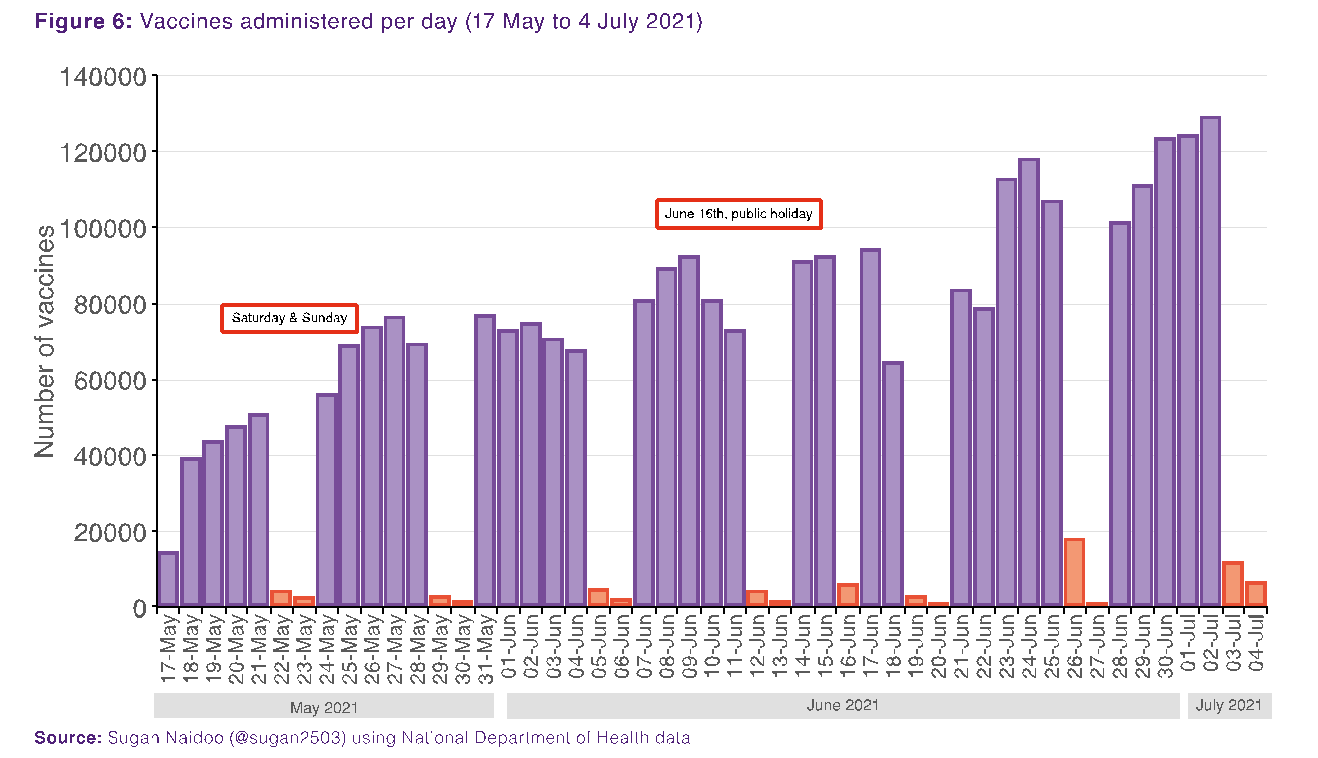 The research has also found that the level of vaccine willingness is not matched by registrations, as this graph of registered people aged over 60 shows. Limpopo is the outlier in registrations, but for the rest, the system needs to assist in fulfilling their enthusiasm for vaccines.

“Getting people motivated is not enough, we need to make it as easy as possible for people to translate their intentions into action. Providing hassle-free access, and removing impediments [is important],” says the research.

The five research waves by the Nids-Cram team have been an X-ray into how the coronavirus knocked the stuffing out of indigent South Africans. The latest research confirms the series trend showing that women have been most severely affected. While the top-line on jobs is that employment levels have returned to pre-pandemic levels, the granular detail of the research shows significant employment churn. This suggests a vulnerable, uncertain and irregular jobs market for workers.

Women are taking the brunt.

“Women’s employment in March 2021 remains 8% lower than pre-pandemic levels, while men’s employment seems to have recovered,” the research finds. It reveals that women benefited in far lower numbers from the government’s distress grants.

“Even though women accounted for the majority of the unemployed (or those not working) throughout the period, as well as the majority of the net job losses recorded between any two periods, they were under-represented in Covid-specific income support.”

The research suggests that women received only 35% to 39% of UIF-temporary employment reliefs and the social relief of distress grants. Spaull says this is because the government did not allow recipients of the child support grant to receive the Covid support grants. 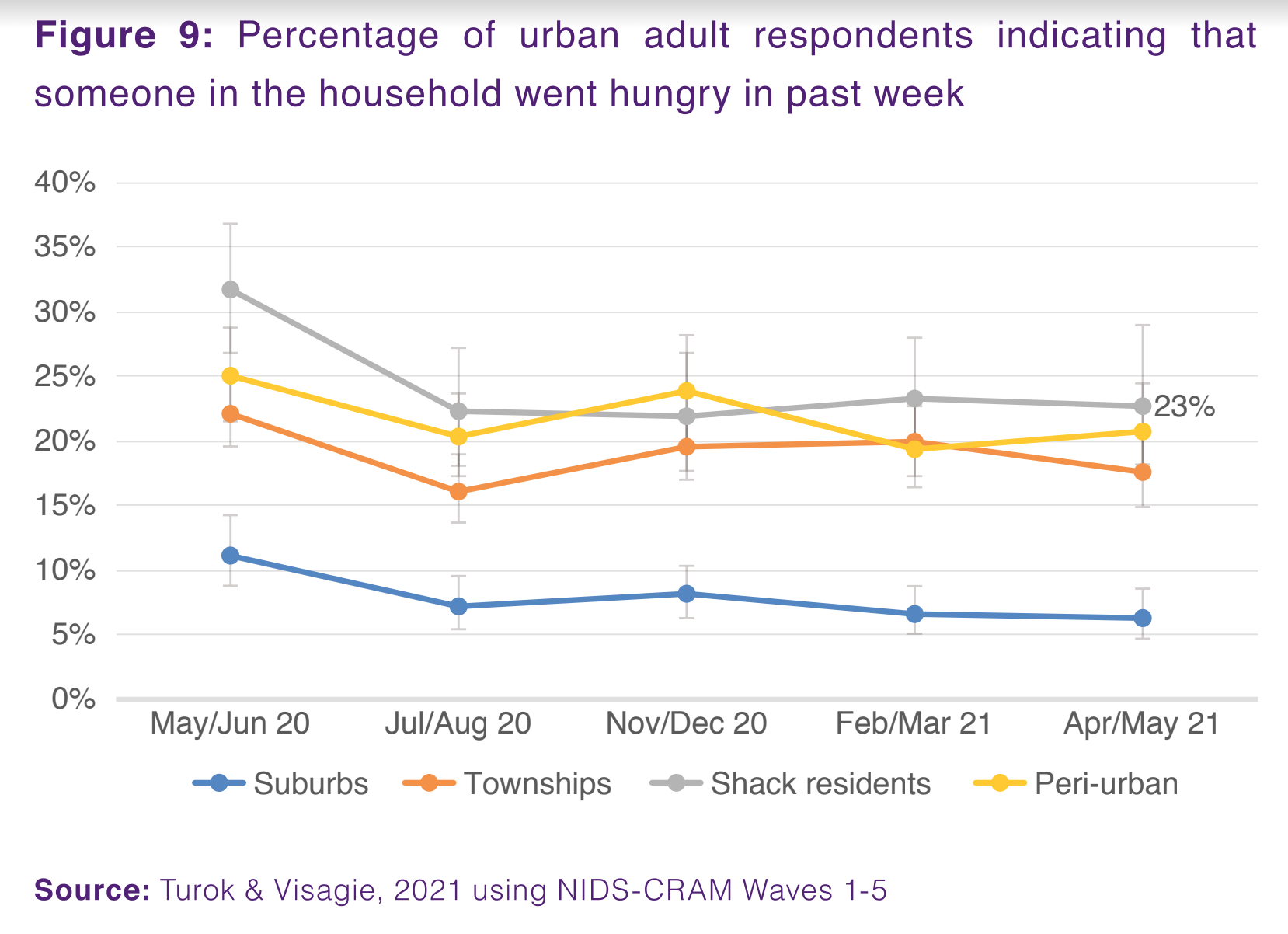 This chart of hunger should keep us all awake. It shows that through the five waves of research, hunger levels have stayed persistently high and the researchers say that the ending of social grants could make it worse.

“Child hunger is once again at the same level as it was during the harshest period of lockdown in South Africa,” the report finds.

People who live in informal settlements or backyards experience the highest levels of hunger, as the chart shows. Lockdowns increase their vulnerability as informal work (as hawkers, waiters, domestic workers) is affected each time there is a lockdown. The researchers advocate for income grants.

“Household and child hunger seem to have stabilised at the new higher rate, which is cause for concern,” says the survey.

The first hard lockdown in 2020 saw worse levels of hunger as the entire economy was shut down, and while it improved, hunger is still endemically high for a middle-income country, indicating a state of emergency.

“Just over 400,000 children went hungry in every wave between May 2020 and May 2021” — and in the latest wave, these numbers went up. Many South African households survive on a blend of income and grants. If one part of that equation is lost, then it plunges people into extreme poverty. School-feeding has picked up again — the research shows access to food at school improved from 49% to 56%.

Researchers say school dropouts may have tripled to approximately 750,000 learners throughout the pandemic — school attendance is at the lowest it has been since the state started surveying in the Statistics SA General Household Survey.

“The highest rates of dropout were found amongst the poorest households, those in rural areas and those with high caregiver worry about learners returning to school,” according to the latest Nids-Cram data.

Are these young people school dropouts or Covid-era absentees?

“On average, they haven’t gone to school for four months — they may go back,” says Spaull, adding that Latin America is showing similar trends of dropouts.

Unsurprisingly, South Africans are reflecting high levels of depressed mood. Researchers asked mental health questions in three of the five surveys and one in two people surveyed showed signs of a depressed mood, as the graph below shows. 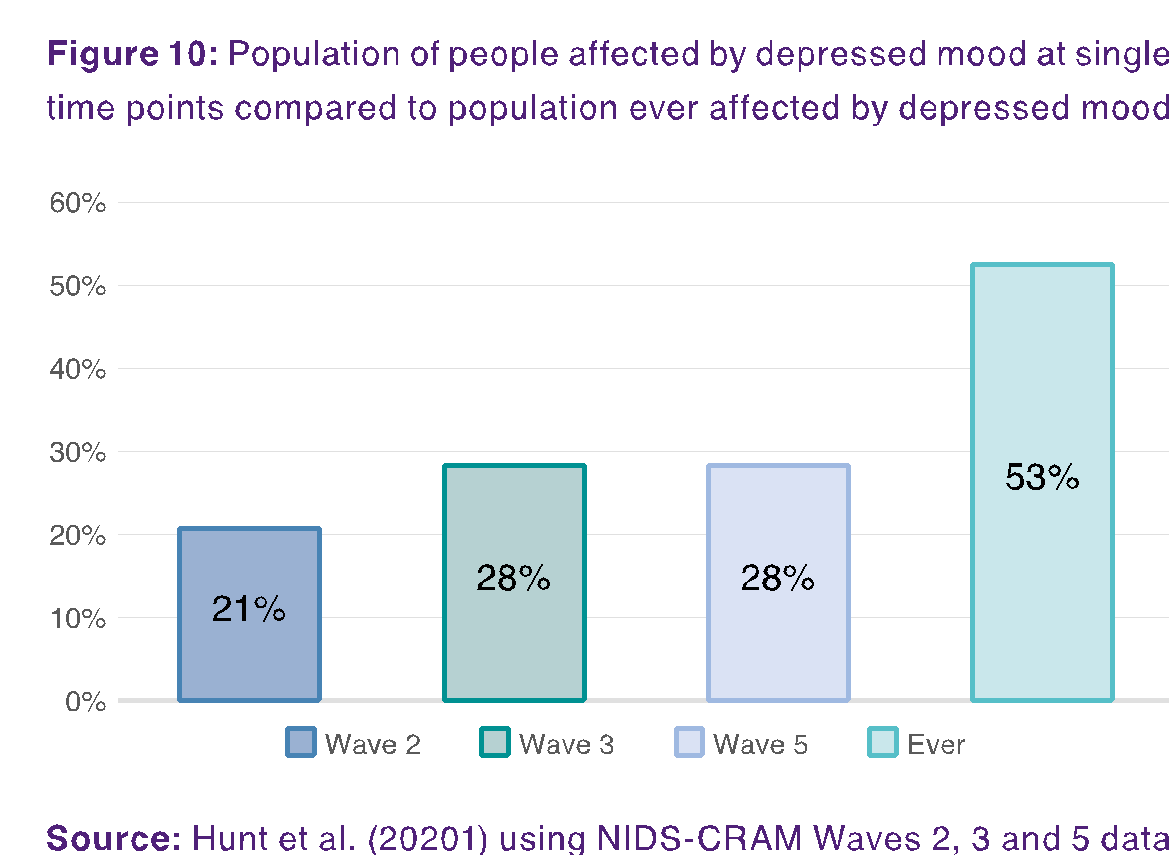 It is what Spaull calls a “silent pandemic” because it can’t be seen like hunger or joblessness. Women in homes where children are going hungry were, unsurprisingly, the most worried or sad. These numbers have come down from highs of 74% in 2020 but remain highest among the poorest South Africans.

“Adults showing indications of higher-than-average levels of depressed mood and living in persistently large households were significantly more likely to be worried, whilst those living in households with more consistent access to government grants over time were less likely to be very worried.”

Economists have begun to note that South Africa’s recovery is K-shaped or unequal. The upper wing of the “K” shows the wealthy as resilient; the lower shows how the most vulnerable are plunged into a worse situation.

The private sector is beginning to model for a robust recovery with a potential GDP growth of just above 5% for the year. The top end of the skilled labour market is resilient, while learners in private or Model-C schools now have blended learning. But for the poorest South Africans who live in shacks or rural areas, or who work in the informal sector, vulnerability is still extreme with no sign of recovery.

The Nids-Cram survey is a combination of the National Income Dynamics Study (Nids) with the Coronavirus Rapid Mobile Survey (Cram). Wave 5 data was collected between April 6 and May 11 with a sample of 5,862 people surveyed. DM