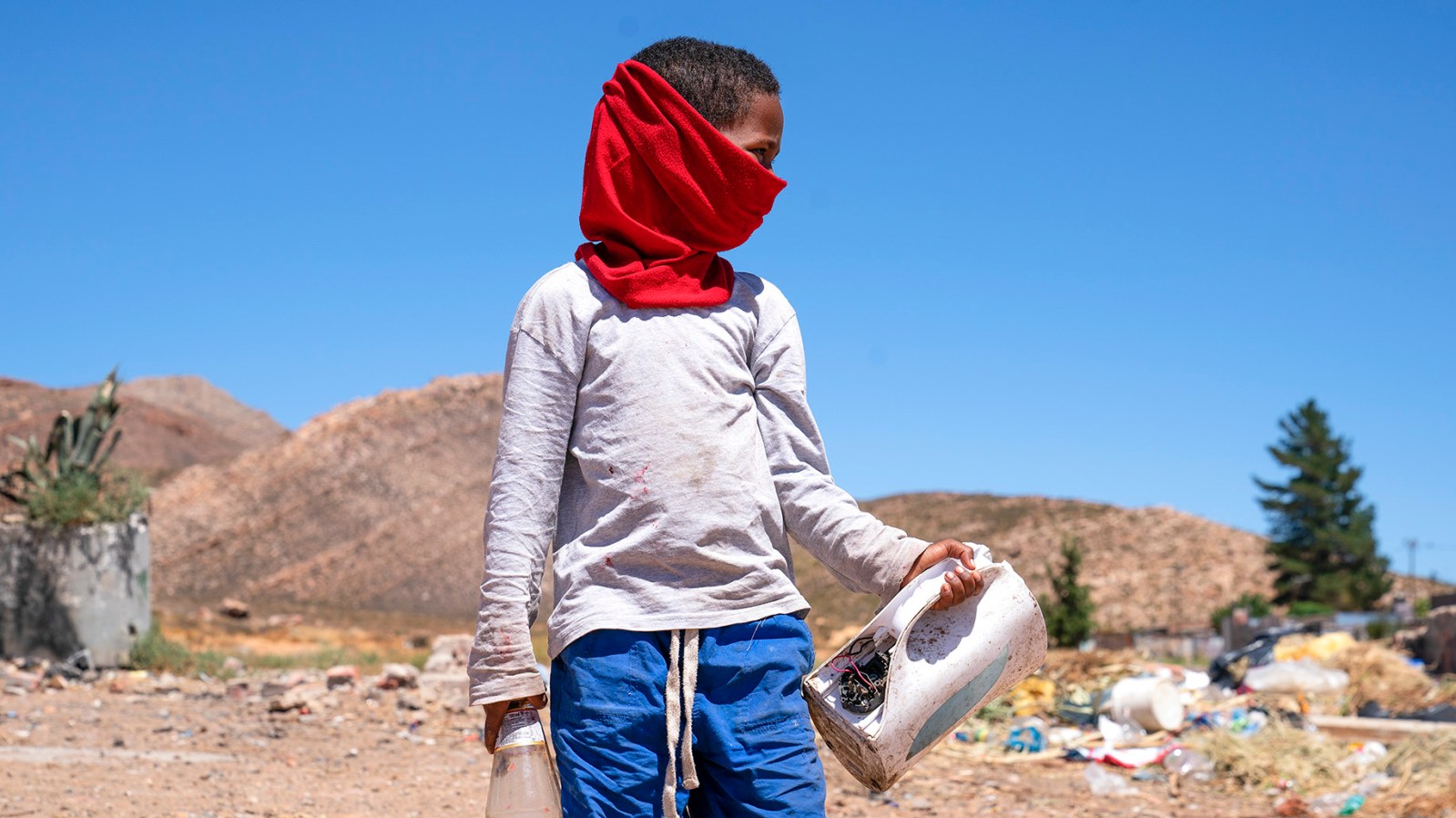 A boy picks up useful items from a rubbish dump in an area that is a beneficiary of the Compassionate Hearts soup kitchen in Touws River, along the R62 wine route in the Western Cape. (Photo: EPA-EFE / Nic Bothma)

Dr Nic Spaull is the co-Principal Investigator for the Nids-Cram survey and is an economist at Stellenbosch University. Professor Mark Tomlinson is the Co-Director of the Institute for Life Course Health Research in the Department of Global Health at Stellenbosch University. He has been a consultant for the World Health Organization, Unicef, USAID and the World Bank. He was elected as a member of the Academy of Science in South Africa in 2017.

Friday 28 May is World Hunger day. This is one of a series of articles Maverick Citizen is publishing all this week looking at the scale, impact and responses to hunger in South Africa. The articles will also be published in a special newsletter on Friday. Subscribe here.

When people are asked the question, “What does it mean to live in poverty?” you get a variety of answers. Some people talk about a lack of income to buy what they need, others talk about a lack of shelter or the absence of choices. These are all quite difficult things to nail down.

How much income is “enough”? What is “adequate” when it comes to housing? How do you define “agency”?

Apart from the obvious anguish and discomfort of experiencing hunger, there are many reasons why hunger is bad. Those who are perpetually hungry are more likely to be depressed, to experience anger and be less able to parent well or work effectively.

We also know that the scourge of hunger is detrimental to children, and especially so to infants and pregnant or nursing mothers. Children that experience chronic undernutrition are more likely to be stunted which has profound implications for their being able to cope in school and engage in meaningful employment across the life course.

There is increasing evidence that caregivers who are hungry are more likely to experience mental health difficulties, which in turn may impact on the development of their children. Compared with those who are not hungry, preschool children that are hungry will experience higher levels of chronic illness and are more likely to be shy and withdrawn when interacting with their friends. Sadly, we also know that the parents and caregivers often report feelings of shame about the hunger of their children, further worsening their mental state.

Exactly how bad were hunger and malnutrition before the pandemic?

South Africa is in a fortunate position to have up to date and reliable data on the extent of hunger in the country, both before the pandemic and now.

Before the pandemic, there were numerous household surveys estimating rates of hunger, stunting and malnutrition. The General Household Survey (GHS) administered annually since 2000 shows the percentage of households who report child hunger because there wasn’t enough food in the past 12 months. (Note this is an annual figure). Encouragingly this rate of child hunger has halved in the last two decades. Between 2000 and 2018, the rate of child hunger among households with children in them declined from 35% to 16%, largely attributed to the successful roll-out of the Child Support Grant and improving economic conditions over this period.

However, hunger is only one measure of malnutrition. One might have food to eat, and therefore not be hungry, but the quality of that food may be poor. Meals composed primarily of processed carbohydrates are far less nutritious than those that include protein, vegetables and healthy fats. We know from research that inadequate diets like this lead to stunting as well as poor attention which impacts schooling.

In a paper published this year, Professor Servaas van der Berg and his co-authors show that before the pandemic child hunger had declined significantly but stunting had not. In 1995 approximately 30% of children under five were stunted in South Africa, but by 2017 this figure was still 27%. Unicef estimates that in many other middle-income countries like Brazil, Iran, and China the prevalence of stunting is much lower at 5% or 6%. As van der Berg concludes “It would seem that the improvement in people’s economic circumstances, induced by the Child Support Grant, was not enough to translate into consuming more nutritious food, rather than consuming more food.”

How has hunger changed during the pandemic?

The National Income Dynamics Study Coronavirus Rapid Mobile Survey (Nids-Cram) has collected data on a broadly nationally representative sample of South African households covering the period from May 2020 to March 2021. It showed that there was a huge spike in reported household hunger in May and June 2020 following the hard-lockdown, with one in four South African households (23%) reporting hunger in the previous week. This has subsequently come down, but seems to have settled at a somewhat lower (but still very high) level of 16-17% of households.

Given that this represents extreme deprivation this is extraordinarily high. By contrast, in 2019 the GHS shows that 15% of households reported a child had gone hungry at least once in the last year.

But what do those numbers actually mean?

If for a moment we assume that children are equally distributed across households with children in them (a conservative assumption), this would mean that 2.8 million children experienced hunger weekly in South Africa in 2021 and 600,000 children experienced perpetual hunger (i.e. hunger every day or almost every day).

Applying a similar approach to the rates of hunger across households, of the 60 million South Africans 10.2 million (17%) experienced hunger in the last week, and approximately 2.4 million (4%) experienced perpetual hunger (every day or almost every day). Clearly, we are not doing enough to alleviate this extreme form of suffering and deprivation.

The Nids-Cram data also allows us to see how households have fallen into and out of food insecurity over the last year. Because we have conducted the survey four times and returned to the same person each time, we can see how their responses change over time. The four time periods cover the months of May/June, July/August and November/December in 2020 and February/March in 2021.

The graph below shows that among households with children in them, one third (32%) reported that a child went hungry in the past week in at least one of these four waves of the survey, and 72% of respondents said that their household had run out of money to buy food in at least one of the four waves. Therefore, the “once-off” rates of child hunger and household hunger underestimate the extent of hunger in the country since many households are falling in and out of food insecurity on a regular basis.

When we think about these disturbingly high rates of child hunger and household food insecurity, we must ask ourselves how is it that we are willing to accept this gross assault on the dignity and humanity of children and adults?

Is this the type of country that we want?

South Africa is arguably the most prosperous and modern country on our continent. It has the most sophisticated financial system, the best universities, an independent media and a highly functional tax collection agency. Yet it also has 10 million people experiencing hunger every week.

The ANC claims that it is the only party that can eradicate poverty (Radebe, 2019) and it is true that it was the ANC that initiated and rapidly expanded the Child Support Grant of R440 per month — an incredibly effective, well-targeted grant that reaches 13 million children. It was largely responsible for the big decline in child hunger over the last two decades and is one of the biggest successes of post-apartheid South Africa. But clearly, poverty and hunger persist.

Why has progress stalled?

While economic growth is the long-term solution to poverty eradication, we simply cannot wait for economic growth before addressing the hunger crisis that is clearly all around us. If the government is serious about hunger and protecting the dignity of the poor, the status quo is not enough.

Hunger is universally condemned across the political spectrum. Those who oppose additional measures to address hunger should be shamed on moral grounds and a lack of conscience. If the ANC is serious about eradicating hunger in this decade then it must announce new and bigger policies to radically address the hunger crisis.

This is a crisis, and one that existed before the pandemic. If bold action is not taken the generational impact will be profound. DM/MC