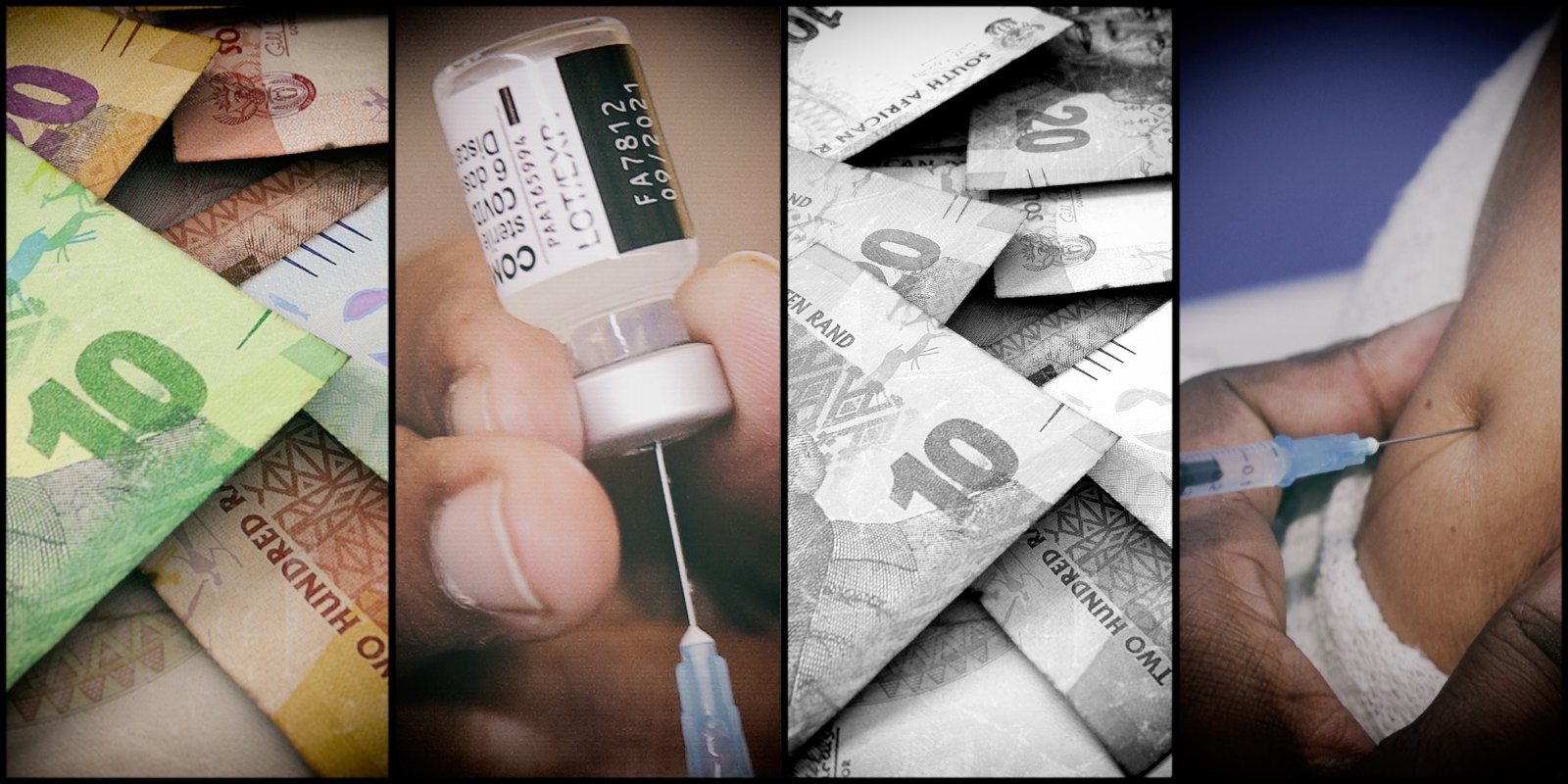 The government’s contingency reserve stands at R12-billion, according to Budget 2021. That’s money to pay overtime to keep Covid-19 vaccination sites open after 4pm and over weekends. And more. But it’s unclear whether the Department of Health has even applied for a share.

The bottom line is simple. Without vaccinations at speed and scale to inoculate at least 67% of adults, South Africa’s economic recovery is teetering while the country’s fragile social fabric is torn further by ever-increasing inequality and dwindling access to service delivery.

It would not be unreasonable to think that South Africa’s government would go all out, by any and all legal means possible, to ensure this happens. Saving lives and livelihoods, after all, has been the government’s mantra since the national State of Disaster was declared on 15 March 2020 — and throughout the uninterrupted Covid-19 lockdown which, on Tuesday, marks Day 461.

Yet health officials are on record as saying vaccination sites couldn’t stay open because of a lack of money to pay for staff. It’s understood this explanation was also given in a series of government planning meetings.

With R12-billion in the contingency reserve — effectively the emergency kitty — money is available.

“We increase the contingency reserve from R5-billion to R12-billion to make provision for the further purchase of vaccines and to cater for other emergencies,” said Finance Minister Tito Mboweni on 24 February, when he presented the 2021 Budget.

It’s unclear if Health has applied for at least some of this R12-billion to, for example, pay overtime to ensure vaccination sites stay open after 4pm and on weekends; or to engage junior doctors who have completed their internships — just more than 200 of these doctors remain unemployed in Gauteng alone, according to reports — or to re-establish field hospitals with intensive-care beds. Or to pay for any other urgent measures to fight the pandemic.

A request for comment on whether contingency reserve funds had been applied for, sent to both the health ministry and department, failed to solicit responses on Monday.

National Treasury was asked on Monday whether any department had applied for such funding, and if Health did apply, whether such funding would be approved.

“All funding requests will follow the normal budget process as guided by the Public Finance Management Act,” Treasury responded.

While the Covid-19 pandemic has challenged countries the world over, it seems South Africa manages, at best, a sluggish performance — officialdom only really started moving on acquiring vaccines in January 2021 — while planning seems to perpetually fall short.

For example, as of 11 June, a total of 576 vaccination sites were operational, according to the government’s coronavirus website. That’s a far cry from the 3,357 promised after Phase 2 of the roll-out from 17 May, when then still-in-office health minister Zweli Mkhize briefed MPs in late April.

On Monday, labour federation Cosatu repeated its call for vaccinations to be speeded up and rolled out, including over weekends.

The federation has raised this issue for a while now in various meetings. Opening vaccination sites on weekends is key, as this is when workers can come for their jabs without negative repercussions, such as losing a day’s pay for missing work, said Cosatu parliamentary liaison Matthew Parks.

“Find the money! Don’t rob yourself of two days of vaccinations a week,” Cosatu said.

While Cosatu noted the latest lockdown restrictions, it called for relief to sectors now prohibited from trading — from liquor and tourism to hospitality.

“This relief needs to come from not only the Unemployment Insurance Fund, but also in the form of tax and rates holidays and loan and premium payment holidays from banks and insurance companies.

“Failure to provide relief is to condemn workers to job and wage losses, and businesses to total collapse.”

Crucially, the UIF relief, or the Temporary Employer/Employee Relief Scheme (Ters), is funded by workers and employers themselves through their statutory contributions.

When President Cyril Ramaphosa on Sunday imposed lockdown restrictions for at least the next two weeks — including a longer curfew, a prohibition of gatherings, a booze ban and the closure of in-restaurant dining — no support measures were announced.

It is understood that the National Economic Development and Labour Council (Nedlac) is meeting on Wednesday to discuss support measures like the UIF Ters and R350 Covid-19 support grant that ended in April.

“Many businesses, particularly in the hospitality and liquor sectors, have already been hard-hit with significant job losses during the Covid-19 pandemic. Wine farms, restaurants and coffee shops cannot survive on takeaways alone,” said Maynier in a statement.

The ANC on Monday expressed its unqualified support for the tighter restrictions.

“We are encouraged by the public vaccination campaign undertaken by government. We urge authorities to continue scaling up and accelerating the programme as part of the overall strategy to contain the Covid-19 pandemic,” the governing party said in a statement.

While vaccinations have increased over the past five weeks, at least 88,000 inoculations a day, seven days a week, are needed consistently until the end of the year to meet the stated government goal of vaccinating sufficient numbers of adults to reach population immunity — not by the end of 2021, but by the extended March 2022 deadline, the Department of Health announced in late March.

On Monday, DA MP Geordin Hill-Lewis called on Mboweni to release the necessary funding for the vaccine roll-out.

“Only 23,621 South Africans were vaccinated this weekend — 21,332 and 2,289 on Saturday and Sunday, respectively. This is an unacceptably slow roll-out, and the delay will be measured in lives lost to Covid-19,” he said in a statement.

Given the R12-billion in the contingency reserve, and a predicted minerals tax windfall, it cannot be about the money.

“There is some wiggle room in the Budget with R12-billion of contingency reserve, of which at least R9-billion is potentially for Covid-19 response. However, the more significant ‘new’ event has been a boon in tax from the rally in platinum group metal prices, which could add up to R45-billion of additional tax revenues this fiscal year, even with the new lockdown. As a result, choices on support are possible,” said Intellidex analyst Peter Attard Montalto about both an extension of the UIF-Ters and the R350 Covid-19 support grant.

If it’s not about the money, then it’s about planning — or the lack of efficient planning in the public interest for the public good.

Some of the inefficiencies are matters of public record. As far back as April, scientists and health experts cautioned about a third wave of Covid-19 infections following Easter festivities, religious and otherwise.

While the Northern Cape, Free State and North West officially were amid the latest wave of coronavirus infections, by the end of May, red flags were again raised (Wits research professor warns of “a very severe third wave”). Yet it took another three weeks for the government to act — and by then Gauteng was hit, and hit hard.

This, in many ways, highlights the tardiness of the government’s responses. And it also highlights how a new system, the National Coronavirus Command Council,  which at the start of the State of Disaster was quick to respond, has now become bogged down in the usual kick-for-touch approach to governance.

But right now, few matters are more important than vaccinations at speed and scale if South Africa is to stand a chance of focusing on redressing deepened hunger, poverty, joblessness and inequality.

The money for jabs is available; the only question that remains is, does the government have the political will and capacity to effectively implement a stepped-up roll-out? DM