Ample vaccines for all in Phase 2, claims Mkhize despite lack of details about where to get jab 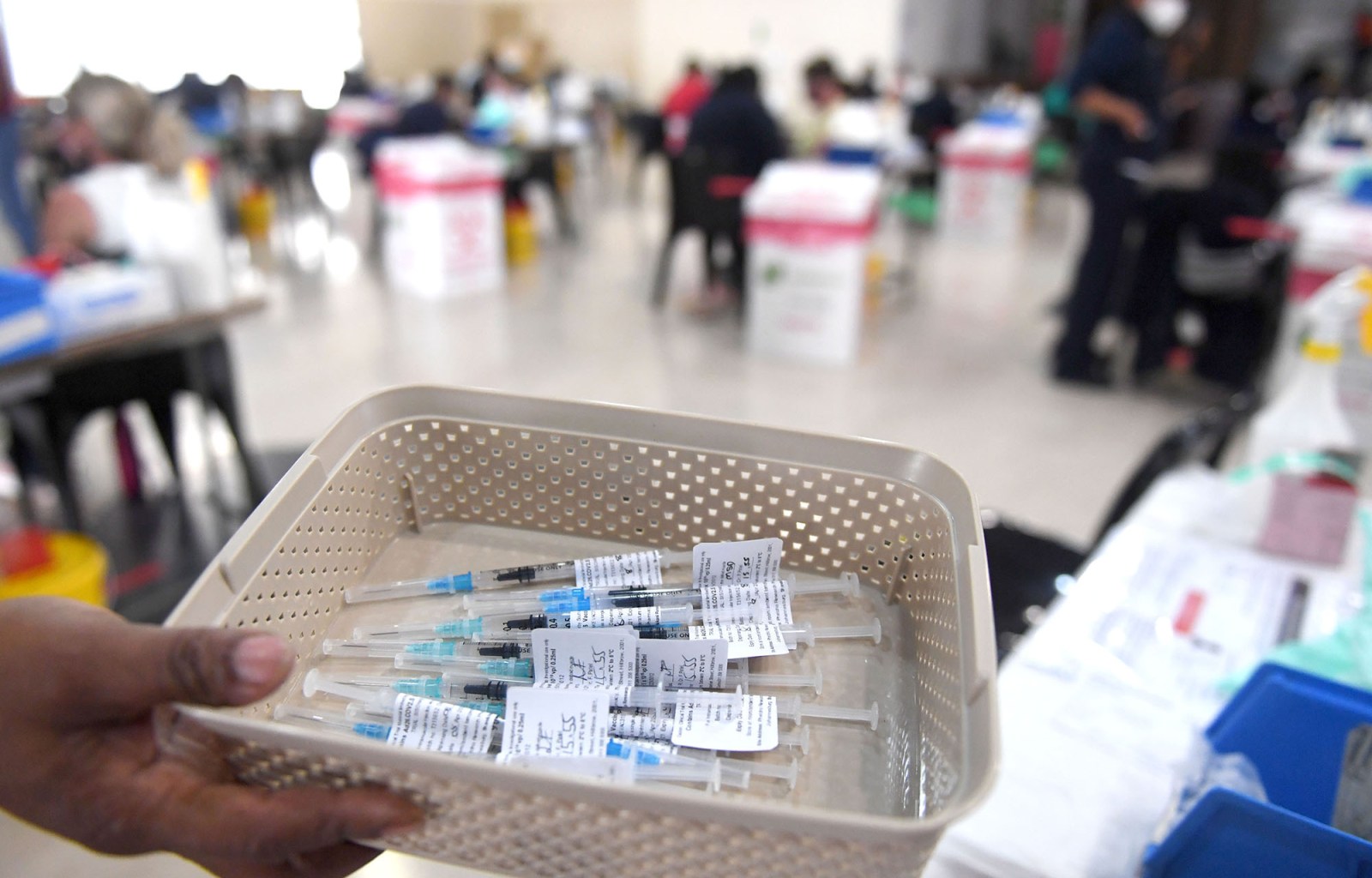 Medical equipment at the vaccination ward at Charlotte Maxeke Hospital on April 08, 2021 in Johannesburg, South Africa. It is reported that the government has rolled out a vaccination programme in the fight against the COVID-19 pandemic. (Photo by Gallo Images/Beeld/Deaan Vivier)

The list of identified Covid-19 vaccination sites remains a work in progress some two weeks before Phase 2 of inoculations from 17 May. But there will be enough vaccines, Health Minister Zweli Mkhize told MPs on Wednesday.

A total of 3,357 Covid-19 vaccination sites are planned countrywide. The majority are set for KwaZulu-Natal (841), Gauteng (746) followed by the Western Cape (611). The Free State and North West have the least sites with 80 and 74 respectively.

Although earlier official talk made much about extra-large sites to push through the approximately 250,000 a day vaccinations needed to hit population immunity by end of the year, this plan now seems to have fallen off.

Only two extra-large vaccination sites are planned – one in Gauteng with an estimated vaccination capacity of 2,400 a day, and one in the Western Cape with 14,400 a day, according to national Department of Health briefing documents to lawmakers.

But the bulk of Covid-19 inoculations falls on hundreds of small and medium vaccination sites, with public sector sites dominant.

Between sites and capacity, it seems the focus is on making up the numbers to reach the around 250,000 daily vaccinations required for population immunity.

But much, it appears, remains a moving target – not only because capacity does not necessarily equate jabs in arms, but also because the list of Covid-19 vaccination sites, including some private sector pharmacies and GPs, is work in progress.

“We don’t want it to be published now, because there is a lot of work still to be done,” said the health minister, adding this inoculation sites list could be released to MPs, but not for publication. “We don’t want to answer questions on things we have already changed.”

“Phase One has been underwhelming. It’s important because of the sheer magnitude to ensure, are the facilities ready?  Health facilities have a myriad of issues like security, infrastructure. All of this contributes to facilities not being ready,” Gwarube told Daily Maverick from KwaZulu-Natal where she visited primary health facilities before moving on to the Eastern Cape.

“My big concern is around awareness of registration. It does not seem there is a clear plan from the (health) department of informing members of the public… And those facilities are not yet ready.”

Also still to be finalised are discussions on the mechanism and costing of how the private sector would obtain vaccines from BioVac, the Covid-19 vaccine storage and distribution facility. “Our team is finalising the costing,” said Mkhize.

Mkhize’s statements to MPs came 18 days before the start of Phase Two of the Covid-19 vaccination programme from 17 May for those over 60 years of age. They were made the same day the Johnson & Johnson Covid-19 vaccines for healthcare workers resumed after a pause following US concerns over extremely rare blood clots.

The Covid-19 vaccination plan, announced at the end of March 2021, indicated in this next phase that vaccinations would be allocated to 5,449,980 people, also those in congregate settings like care homes and workers with access to occupational health programmes. It would also be extended from July 2021 to 12,900,160 more people, including the over-40s and workers in high-risk settings.

“We expect the first two weeks of May we would have received close to 600,000 of the vaccines. So there’ll be enough vaccines to start Phase Two, while we are doing Phase One… No part of the country will run out of vaccines,” said Mkhize, pointing out over one million J&J vaccines are being delivered this week, followed by over 300,000 Pfizer vaccines every week in May.

That’s been possible because of the Covid-19 no-fault compensation fund — part of the agreements to procure vaccines from the various manufacturers — was gazetted by 22 April as undertaken earlier that month.

Mkhize moved to downplay pressure from the Western Cape, which is pursuing its own Covid-19 vaccine procurement, as again emerged last week when the minister alongside Western Cape Premier Alan Winde visited a vaccination site in Mitchells Plain.

“There is no need for provinces to buy their own vaccines. If they did, it would amount to fruitless and wasteful expenditure… We bought on behalf of the entire country,” said Mkhize, telling MPs no province would get the volumes for better pricing on vaccines.

Details may be scarce of Covid-19 vaccine sites and related logistics, but Mkhize was clear on one thing — religious, political, parliamentary, business, sports and traditional leaders must come forward and be seen to be at the forefront of getting the Covid-19 vaccine. DM