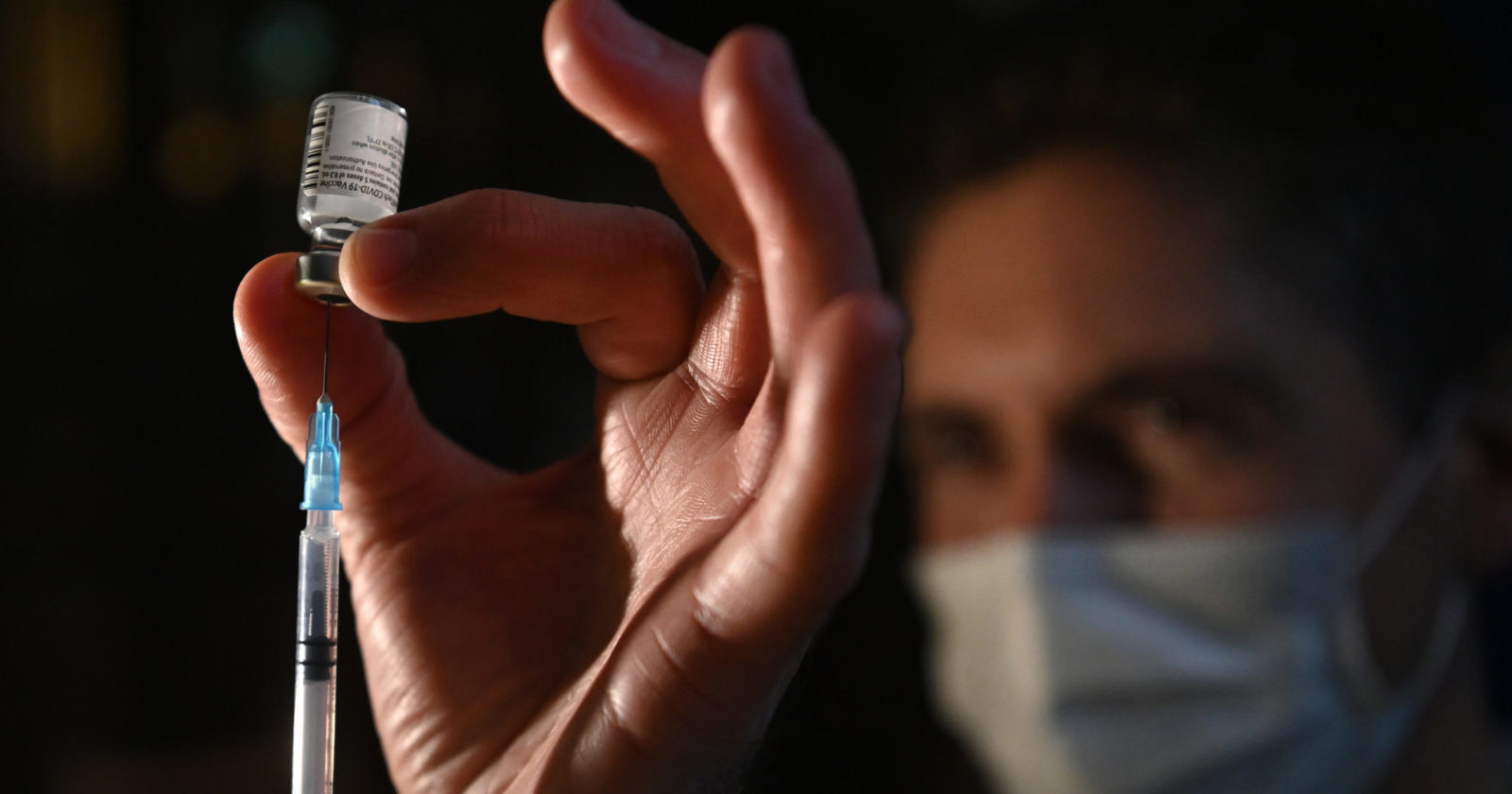 A doctor administers the Pfizer-BioNTech vaccine at a vaccination centre in Salisbury Cathedral in Salisbury, Britain. (Photo: EPA-EFE / NEIL HALL)

South Africa’s Covid-19 vaccine acquisition, having fumbled out of the starting blocks, remains wobbly on costing. Without transparency about how much funding is needed for what – be that doses, transport or vaccinators – the vaccine roll-out may yet stray off course.

The Department of Health on Thursday referred questions about the costing for South Africa’s Covid-19 vaccine roll-out to the National Treasury, which in a written response to questions on modelling/estimates, simply said:

“Detailed financing measures, including any announcements on tax changes, will be announced on Budget day in February.”

A few things, nevertheless, have emerged.

The Department of Health will be in charge of the procurement of and payment for vaccines as a measure to maintain control. And already the department has requested, and was granted, two procurement deviations from usual acquisition processes.

On 29 September 2020, the department had requested a deviation to approach Covax for vaccines. This was granted on 23 November.

On 6 January 2021 the department asked for, and received, another procurement deviation to approach AstraZeneca, Pfizer, Moderna and other vaccine makers for a period of six months after stock is available. After that, the usual competitive tender procedures would be pursued.

“The Department of Health undertook to negotiate prices with suppliers to achieve the best available prices for South Africa; inform National Treasury of the processes followed and the agreements reached with manufacturers; and advertise a tender for these vaccines to secure supply in the longer term,” said Mogajane’s letter.

On 7 January 2021 the Department of Health put a R20.6-billion price tag on vaccinating 67% of South Africans, the necessary number to reach herd – or, the more PC – population immunity.

The rands and cents are on the second-last page of Health Minister Zweli Mkhize’s 43-page presentation to Parliament. Scant detail is provided; distribution, training and administration and the like are mentioned, but without cost estimates.

Just two weeks later those departmental costings have been blown to bits.

Business Day on Thursday reported that South Africa would be paying $5.25 (R78), for its preferred AstraZeneca vaccine, or more than double the EU’s €1.78 per dose and also more than the $4 the US is charged.

Health Deputy Director-General Anban Pillay was quoted as saying the Serum Institute of India (SII), which will supply the vaccine it produces for AstraZeneca, had “applied a tiered pricing system, and given that SA is an upper-middle-income country, their price is $5.25. The explanation we were given for why other high-income countries have a lower price is that they have invested in the R&D (research and development), hence the discount on the price.”

At R78 for each of the two doses of the AstraZeneca vaccine, or a total of R156, this is some 30% over the costs presented to Parliament.

Hitting closer to the mark with its R145 total cost for each AstraZeneca double-dose regimen was the collective of public health academics and scientists in early January 2021.

Towards herd immunity from Covid-19: Costing a vaccine strategy for South Africa

It would cost R7.4-billion for the AstraZeneca Covid-19 vaccine, including the Covax component, which the Department of Health agreed to buy for R366.70 per vaccine dose. If the Pfizer vaccine is chosen despite the limited availability of -70° storage facilities, this would cost more – R15.2-billion.

In addition, an estimated R1.2-billion is needed to hire 8,851 nurses for the Covid-19 vaccinations.

Thus, it would cost between R8.6-billion and R16.4-billion for Covid-19 vaccinations, according to the group of health experts.

Intellidex analyst Peter Attard Montalto in a recent brief similarly put the “raw cost of doses [at] R8-billion”, plus around R10-billion for what’s described as “unclear logistics and supply chain costs”, including transport, administration, data collection, training, and disposables, like syringes.

This R18-billion price tag would drop to R8-billion on the back of recouping monies from medical aid schemes, including for cross-subsidisation of jabs in the public sector, and through private sector donations.

“Whilst an aspirational plan is now on the table, the logistical supply chain supports and underlying modalities and policies to see this rolled out have not occurred yet and will come together in the next two months still,” said Attard Montalto.

But that plan seems to be a moving target – from barcoding vaccine vials (once they arrive in South Africa), and having soldiers secure vaccines to jab pre-registration. The red tape seems overwhelming.

Some of those details were outlined on Tuesday 19 January by the Health Department’s Aquina Thulare, technical adviser on the National Health Insurance (NHI) and part of the Covid-19 Partnership Task Team, during an ANC Progressive Business Forum webinar.

“The vaccination system is going to be based on a pre-vaccination registration system, meaning all of us will have to be on a register of some sort, so that we know who has been vaccinated, where they are going to receive the vaccination…”

It’s a process that echoes the registration and data collection to qualify for Covid-19 relief measures pursued by small business (spaza shops) and tourism (tour guides).

It seems a highly bureaucratic approach to a national urgency. South Africa already has in place a vaccination system across both the public and private sectors that annually dispenses between 15 million and 20 million childhood vaccines.

The health minister’s spokesperson, Lwazi Manzi, told Daily Maverick it was not a duplication as currently no facility is already vaccinating for Covid-19.

“We are looking at existing infrastructure and we are trying to leverage off that,” Manzi said in a text response on Thursday.

“Since we have never undertaken such a massive mass inoculation campaign, the existing infrastructure will not be enough. So we will need to augment it by looking at, among other, workspaces, community spaces (e.g. churches and community halls), mobile solutions and temporary structures for vaccination centres.”

The devil will be in the detail. Like the contracts the Department of Health will sign not only with the Serum Institute of India (SII), but also manufacturers like Moderna or Johnson & Johnson. Details of those vaccine contracts would be up to the department to release.

And questions remain over costing details, and funding.

While the National Treasury director-general this week went on public record raising the possibility of tax hikes to pay for the Covid-19 vaccines, that’s in the 18 January 2021 letter.

“Funding will likely come from a combination of additional budget, reprioritisation within budget and potentially from partnerships with the private sector…”

South Africa’s track record on the Covid-19 vaccine to date is marked by the scrabbling to pay the Covax deposit in December 2020.

In the wake of the Covid-19 personal protective equipment tender scandal, what’s needed on the vaccine roll-out is transparency. But the lack of plain speak on costing is a concern.

To date, no one from the Department of Health has talked about the offers of assistance from, for example, the Independent Community Pharmacy Association that’s on public record offering its network of pharmacies with cold storage and transport networks into rural areas.

And the current governance posture means South Africa remains in the dark where the vaccine rands and cents go until the Budget is tabled in Parliament on the last Wednesday in February. DM