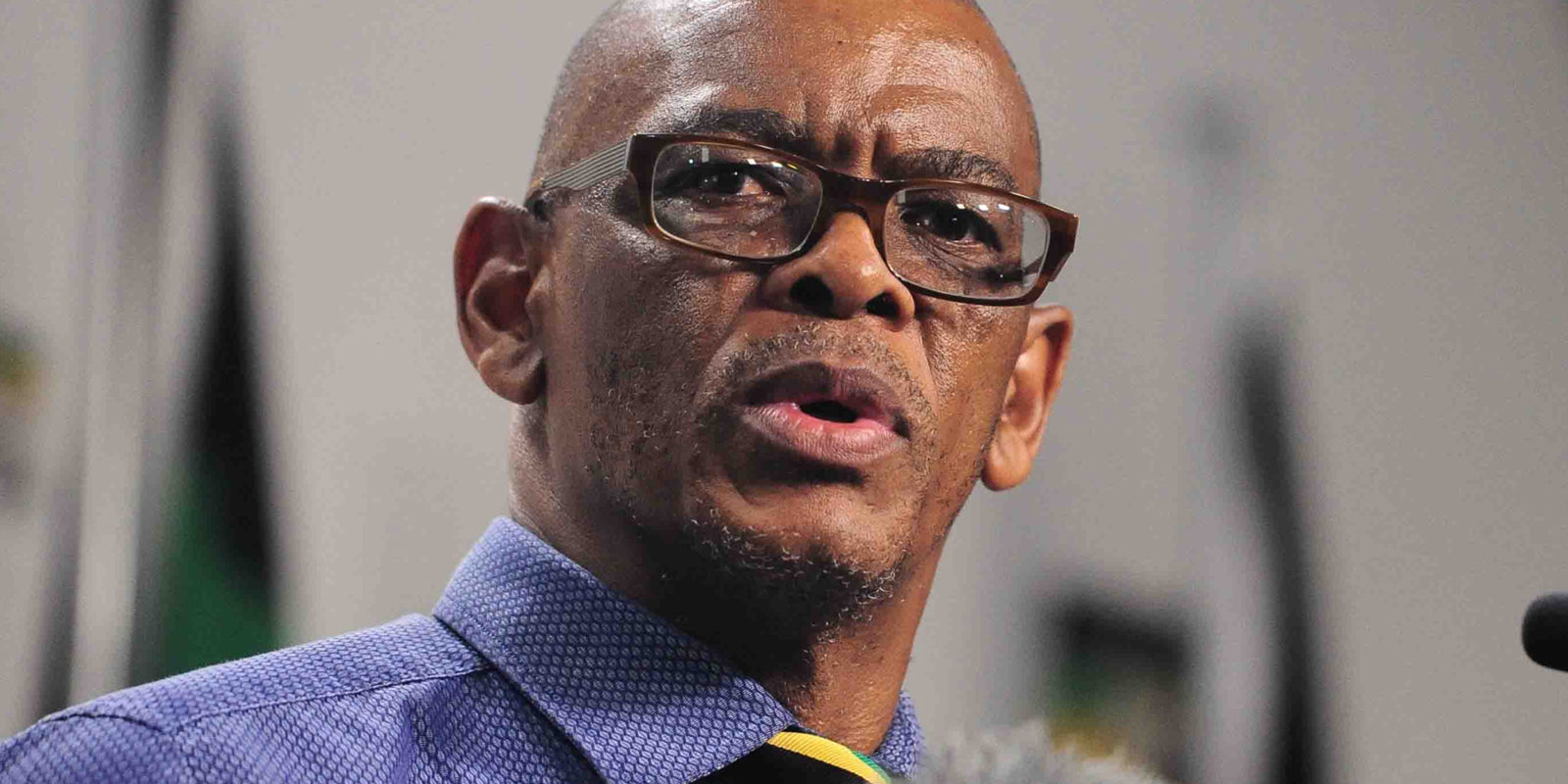 Suspended ANC secretary-general Ace Magashule believes the ANC is doomed if its current step-aside regime is allowed. He detailed this and other views to the high court in Gauteng where he’s trying to have his recent suspension reversed, while also trying to validate his suspension of President Cyril Ramaphosa.

Magashule was suspended from his political job last week after failing to step aside from his position while facing corruption charges.

That same evening though, in an apparent counter move, he issued Ramaphosa with a suspension notice relating to claims about the funds Ramaphosa raised for his CR17 campaign to become ANC president.

Magashule was then ordered to publicly apologise for this.

Instead of complying, he has now approached the high court to try to reverse what the ANC has meted out to him.

And he has painted himself the victim of a campaign to see Ramaphosa remain in power.

“The real motive behind my being purged is the desire to remove me, by hook or by crook, from the all-powerful position of SG, so that the road to the reelection of President Cyril Ramaphosa and his faction in the next National Conference is made easier,” Magashule said in his founding affidavit, dated Thursday, in the high court matter.

“I may add that the fears that would interfere with the democratic process are a misplaced sign of unnecessary panic.” (sic)

The notice of motion was signed by Mabuza Attorneys (which said it was the applicant’s – Magashule’s – attorneys) and included Eric Mabuza’s email address – in April this year, Mabuza announced the firm was withdrawing as Jacob Zuma’s attorneys in a corruption case Zuma is central to.

Magashule plans to urgently apply to the court, on 1 June or as soon as possible thereafter, for an order that the ANC’s ‘current’ step-aside regime be declared unlawful or invalid, his suspension be uplifted, and that his suspension of Ramaphosa be deemed valid.

In addition, Magashule also wants the court to rule that he does not have to apologise for issuing the suspension letter on Ramaphosa.

Simply put, Magashule wants his power within the ANC restored — pushing ahead with this means he is deepening divides between factions within the party.

The respondents in the high court application he is driving are Ramaphosa, ANC deputy secretary-general Jessie Duarte and the ANC.

This high court action overlays other high court proceedings Magashule is central to — he is an accused in a corruption case and faces charges relating to a R255-million asbestos audit contract while he was Free State premier.

Along with others, he is set to appear in the Bloemfontein high court in August.

In his affidavit in the application matter against Ramaphosa, Duarte and the ANC, Magashule therefore rather ironically referred to corruption.

“One of the most serious problems facing South African society[,] the South African state (which is governed by the ANC) is corruption. It manifests itself in many guises, including abuse of public power and positions, as well as the phenomenon known as state capture and other criminal activities,” he said.

“Corruption and malfeasance, particularly but not exclusively in the public sector, threatens the very survival of the South African state and the ANC itself as the governing patty [sic]. The President of the ANC has in the past officially declared the ANC as ‘Accused Number One’ in relation to the scourge of corruption in South Africa.

“It is against this background that the ANC conceived of the step-aside regime in its original form.”

In August 2020 resolutions were made during a special anti-corruption meeting of the ANC’s national executive.

According to Magashule’s affidavit, it “took a decision to investigate the lawfulness of the step-aside regime and/or the modalities of its implementation if it was lawful.”

This, he said, involved seeking an array of legal opinions from experts.

“It was widely speculated in the media, among the membership of the ANC and within society in general that these steps were being taken to target me personally, with the aim of advancing the aforementioned factional agendas and, more specifically, to remove my rights as a member and leader of the ANC to participate in the political activities of the ANC and its structures ahead of the next elective National Conference of the ANC to be held 18 months’ time.”

In his affidavit, Magashule referred to the charges he faced.

These linked to a November 2020 arrest warrant issued against him.

Magashule said the National Prosecuting Authority decided to criminally charge him relating to his time as Free State premier, from 2009 to December 2017 when he was elected as a full-time ANC official.

“The charges relate to allegations of wrongdoing in respect of allegations to implement oversight over certain functionaries who were part of the provincial administration of the Free State.

“To my knowledge, no other public official in the history of South Africa has ever faced criminal charges in respect of indirect criminal liability for lack of ‘oversight’. It is an oddity, if not a downright absurdity.”

Magashule said after analysing the charges, “the ANC came to the unanimous and correct conclusion that the charges against me are frivolous and unsustainable.”

Despite Magashule’s view on the charges, events drastically and recently swung against him.

Last Monday, 3 May 2021, the ANC’s National Working Committee decided that party members who face criminal charges had to step aside.

This is where Magashule feels he’s effectively being ganged up on and where the ANC may implode.

The role of SG, he said in his affidavit, was critical and could potentially determine the outcome of a national conference.

“It is therefore not surprising that the dominant CR-17 faction within the NEC, which is the so-called CR Faction, would stop at nothing in their quest to capture the office of the secretary-general,” Magashule said.

“I need to put it plainly that there is no other single conduct which is calculated to sow divisions and possible collapse of the ANC than the current unfair, selective and factional ‘implementation’ of the revised step-aside regime.

“Accordingly, while no sane person can oppose the spirit of the original step-aside regime… the current and unlawfully and factionally reconfigured version thereof must be resisted and declared unlawful if the ANC is to survive. Failure to do so will spell the end of the organisation.”

Magashule also focused on his purported suspension of Ramaphosa.

“Strangely, the suspension of the President was not given any effect to, even before any discussion thereof took place and despite the fact that he had taken no steps to challenge it,” he said.

“This is clear evidence of selective justice, according to who belongs to [the] dominant faction.”

Following Magashule’s serving of the suspension note on Ramaphosa, the ANC had acknowledged it, just not in the way he had wanted.

“The ANC requests that the secretary-general respect the decisions of the NEC and subject himself to the discipline of the organisation,” it had said in a statement.

In his affidavit, Magashule also addressed a recent ANC meeting held online this past Saturday, 8 May 2021 (three days after his suspension and his attempted counter-suspension of Ramaphosa).

He said that morning he was invited to the meeting between the ANC and National Working Committee of the ANC Women’s League and attended “in my capacity as secretary-general”.

“To my utter surprise and despite all of the aforegoing (sic) acts of acquiescence, at the instigation of [ANC chair Gwede] Mantashe, the meeting resolved to evict me from participation, solely on the ground that I was suspended.”

Magashule said this was despite confirmation by Duarte that he had submitted an appeal letter (presumably against his suspension) the day after being suspended.

“My eviction was clearly unlawful and unexpected and in flagrant breach of my rights as conferred by the ANC constitution,” he charged.

“Its intention was merely my public humiliation, which was greatly achieved thereby. Every media outlet predictably led with the news of my being ‘booted out’ of the meeting and the alleged ‘victory’ for Ramaphosa, as proclaimed in the media.”

Magashule had been advised that the court application he was driving, should it not be resolved as was expected, deserved to be heard on the basis of urgency.

“To the naked eye, the disputes which arise in this matter would seem to be within certain individuals, including those cited in the heading of these papers or even to be among the members and/or leader of factions of a certain voluntary organisation, which is commonplace in any society or community.

“However, upon reflection and bearing in mind the position of the ANC as the custodian of the state and ruling party for 27 years since the advent of democracy in South Africa, it will be clearer that the attendant crisis in the ANC spells a crisis for all South Africans, whether or not they support or vote for the ANC. The President of the ANC is also the President of the country.”

Magashule referred to the next local government elections set for 27 October 2021.

“It is therefore traditionally season of heightened tensions as various structures of the ruling party, and indeed other parties, will be engaged in the process of selection of candidates for membership of councils and mayorships across the country,” he said.

“To do this under a cloud of uncertainty and instability at the top will be predictably catastrophic. In this respect literally every day which passes edges the nation closer to a crisis.”

Magashule said a speedy resolution would be to the benefit of the country.

“The matter is also urgent on the grounds that the harm in question is ongoing and worsening with each passing day. Quelling the rising tensions will also eliminate or reduce the temptation on anyone to resort to self-help or even violence of any kind.” DM