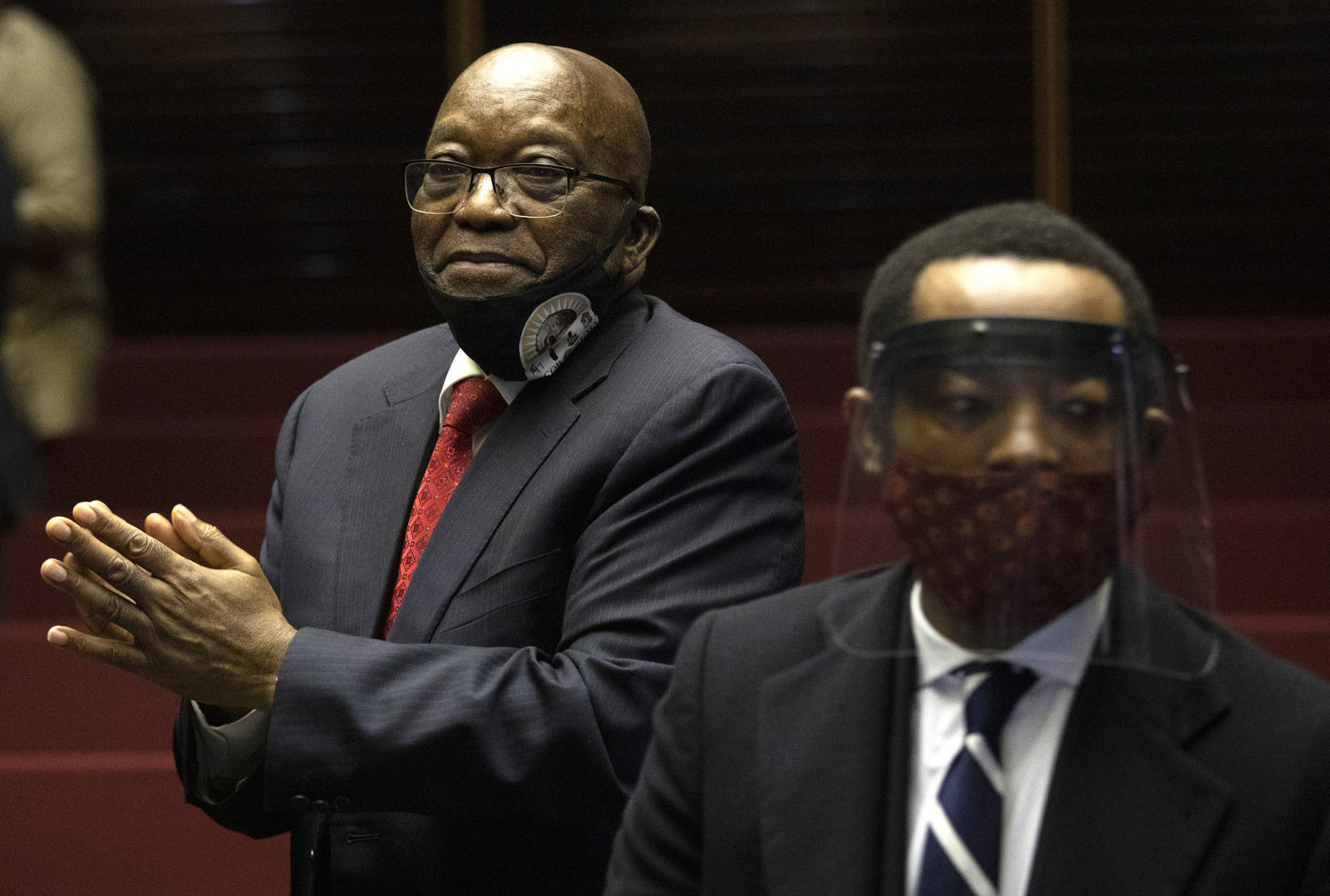 Mabuza Attorneys has withdrawn from Jacob Zuma’s corruption case in the Pietermaritzburg High Court, weeks before the former president was due to go on trial, making a postponement highly likely.

Former president Jacob Zuma will probably be able to postpone his Arms Deal-related corruption case, scheduled from 17 May to 30 June 2021 in the Pietermaritzburg High Court, after his legal representatives, Mabuza Attorneys, officially withdrew from the case on Wednesday.

In a letter, Eric Mabuza informed the court that his firm would “hereby withdraw as the attorneys of record for Accused No. 1.”

Zuma and French arms company Thales face one count of racketeering, four counts of corruption and one count of money laundering. The former president faces an additional 12 counts of fraud.

The charges relate to alleged payments Zuma received from Thales, through his financial adviser Schabir Shaik, who was convicted in 2005. Zuma is accused of offering to use his political influence to protect the company from investigations into the Arms Deal and of trying to solicit a R500,000 annual bribe from Thales.

It’s unclear why Zuma is parting ways with Mabuza Attorneys. He appointed the firm a year ago, almost to the day, to replace attorney Daniel Mantsha. Zuma appointed Mantsha in July 2018 to replace Michael Hulley, his long-time legal representative.

After Zuma appointed Mabuza Attorneys in April 2020, his foundation dismissed claims that he was trying to delay his corruption case. The former president retained the services of Muzi Sikhakhane SC, who has since represented Zuma in hearings at the Pietermaritzburg High Court and the State Capture Commission.

Attorneys appoint advocates and it’s unclear whether Zuma wants to retain Sikhakhane or whether the SC will make himself available to continue to represent Zuma.

The withdrawal of Mabuza Attorneys will almost certainly lead to a postponement in Zuma’s corruption case.

Zuma has been accused of using a “Stalingrad defence” in his various legal challenges, essentially challenging every possible point and appealing any adverse outcomes to delay the cases against him.

In a statement on Wednesday, NPA spokesperson Sipho Ngwema said the state is ready to proceed with the case on 17 May, but it’s unlikely to go ahead on that date.

“Could it cause a postponement? Absolutely, yes,” said Dr James Grant, a practising criminal law advocate.

Grant said the attorneys who took over Zuma’s defence would be justified in requesting a delay.

“Anybody who took it on now would just be insane to say that in less than three weeks they would be prepared to bring themselves up to speed with the complexity of what Zuma’s facing,” Grant said.

Criminal defence attorney Tyrone Maseko agreed. “Whoever takes on the case now will need time to prepare,” he said.

Grant said that when attorneys withdraw from a case, it’s standard practice for them to appear on the scheduled court date and announce that they will no longer participate. Normally, their replacements would be introduced and, often, they would request a postponement.

It’s unclear whether Zuma has appointed a firm to replace Mabuza Attorneys. He might be entitled to further postponements if he’s unable to find a replacement.

Grant explained that Zuma could appear in court on 17 May and say he has been unable to find attorneys to represent him. Then he could return after the postponement and say the same thing, requesting another delay.

The Supreme Court of Appeal recently ruled that Zuma must repay the legal costs incurred by the state in his private capacity, estimated to come up to as much as R25-million.

Grant said Zuma could fall into a situation many South Africans find themselves in, where he cannot afford the legal representation he believes he deserves while Legal Aid lacks the expertise to handle his complex case.

The idea of Zuma applying for Legal Aid appears unlikely, but it’s an option. The former president would have to prove he qualifies to receive Legal Aid.

Zuma may not want to submit his financials for scrutiny after a court found in March 2021 that a former president, who couldn’t be named, was less than candid about his income in an interim maintenance application prior to a divorce.

If the court suspects that Zuma is appointing and changing his legal teams to delay his corruption trial, section 342(a) of the Criminal Procedure Act allows it to investigate and refuse further postponements.

“To my knowledge, he hasn’t done this before,” said Grant.

Judge Dhaya Pillay issued a warrant of arrest for Zuma after he failed to appear in the Pietermaritzburg High Court in February 2020, which was stayed until his scheduled appearance in May of that year. It was cancelled when Zuma’s lawyers submitted documents showing he missed his court date because he was ill.

While Zuma’s Arms Deal corruption case is yet to begin, the Constitutional Court is expected to make a ruling soon on the State Capture Commission’s application to send him straight to prison for two years for violating the court’s order that he testify in front of Deputy Chief Justice Raymond Zondo.

Chief Justice Mogoeng Mogoeng asked Zuma to submit an affidavit, up to 15 pages, on his potential sentence. Instead, Zuma replied with a 21-page letter repeating allegations of judicial bias. DM