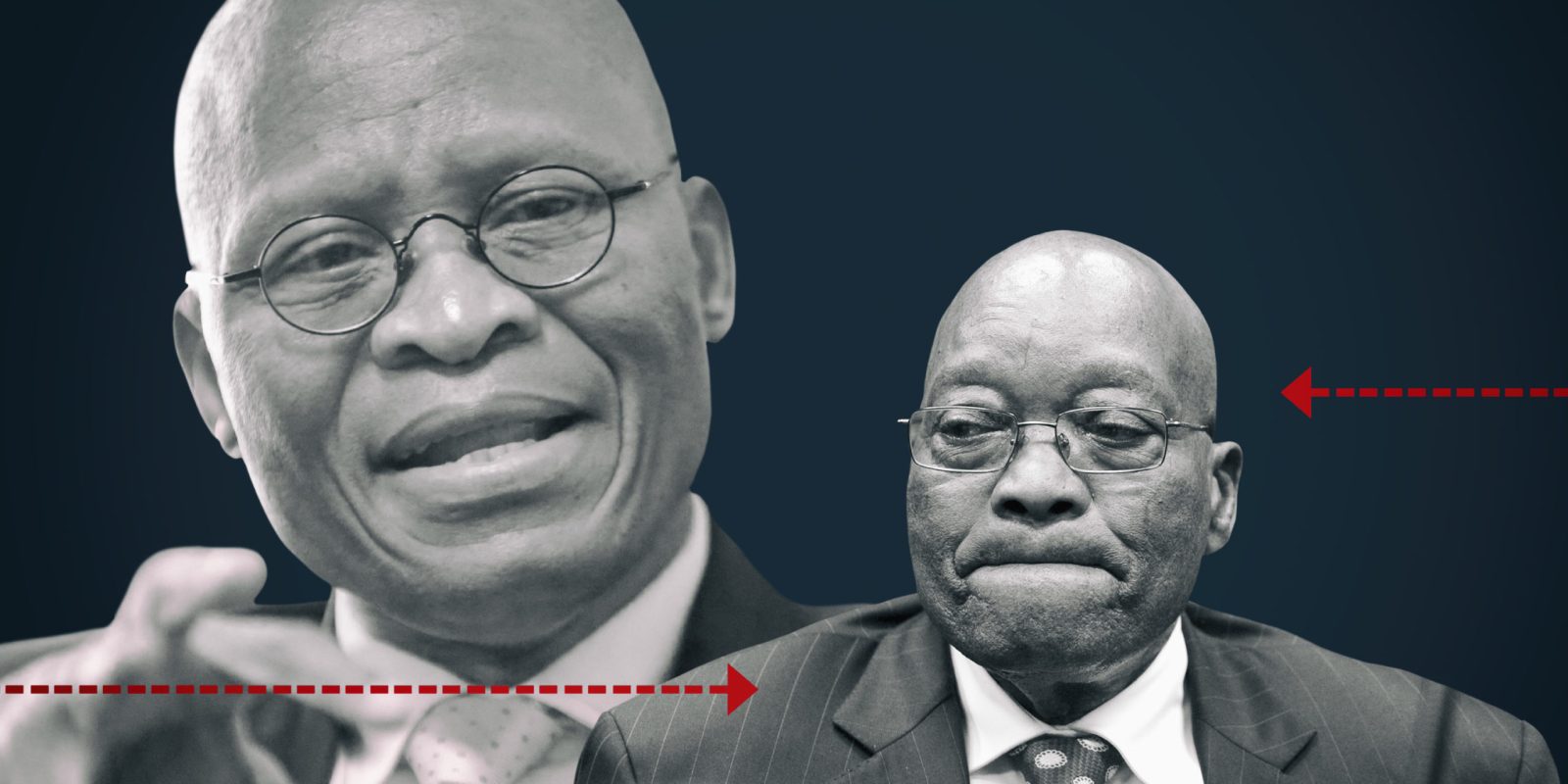 Requested to submit an affidavit on his potential sentence for violating a Constitutional Court order, former president Jacob Zuma sent a letter to Chief Justice Mogoeng Mogoeng repeating allegations of judicial bias and suggesting his potential imprisonment could lead to a challenge to the judiciary’s powers.

During the State Capture Inquiry’s Constitutional Court application to hold Jacob Zuma in contempt of the court’s January 2021 judgment, which said the former president must appear in front of Deputy Chief Justice Raymond Zondo and answer questions, multiple justices questioned the commission’s call for Zuma to be imprisoned for two years.

Zuma hasn’t participated in any of the court proceedings launched by Zondo’s commission since he walked out of its hearings in November 2019, when Zondo denied Zuma’s recusal application.

During a March 2021 Constitutional Court hearing on the commission’s application to send Zuma to prison, Justice Mbuyiseli Madlanga asked Tembeka Ngcukaitobi SC, representing the commission, for examples of courts sentencing individuals to prison for contempt when they had failed to argue their case.

Madlanga suggested the court could request Zuma’s input on his punishment, should he be found in contempt, which Ngcukaitobi rejected.

Last week, Chief Justice Mogoeng Mogoeng, who did not sit on Zuma’s recent cases but issues all Constitutional Court directives, wrote to the former president asking him to file an affidavit on an appropriate sanction if the court finds him in contempt of its order to appear before the commission.

Zuma replied with a letter, rather than an affidavit, on Wednesday, 14 April, claiming he did not want to validate “a sham and an attempt to sanitise the gravity of the repressive manner in which the Court has dealt with my issues”.

Zuma’s letter to Mogoeng tackled his legal challenges on multiple fronts. He criticised the lawfulness of the State Capture Commission, made broad statements about judicial bias, questioned details of the Constitutional Court case against him and challenged the court to imprison him and make him an example of supposed judicial overreach.

While claiming that Mogoeng’s directive was aimed at justifying the foregone conclusion of a prison sentence, Zuma said he was only given three days to respond (he had three working days and the weekend) and should have been given a chance to respond to the merits of the contempt case, which he had already declined the opportunity to do in court.

“If the Court is of the view, as it does, that it can impose a sanction of incarceration without hearing the ‘accused’ I still leave the matter squarely in its capable hands,” he said.

He questioned the Constitutional Court’s somewhat controversial decision to grant the State Capture Inquiry direct access to the court when it applied to force Zuma to testify, which he said convinced him the court did because of the commission’s “political nature”, claiming it was “established to destroy the work that I did when I served my country as President”.

If Zuma had participated and argued the point of direct access in the Constitutional Court, his claims might have stood a chance. Instead, he repeatedly declined to participate, claiming “conscience objection”.

But the Constitutional Court’s judgment clearly upheld Zuma’s right not to incriminate himself and said the section of the Constitution he cites relates only to arrested or accused persons, not witnesses.

Zuma said of the ideals for the apex court: “The Constitutional Court would represent freedom for everyone, and with it, I believed that we would be safe from the unjust and oppressive political narratives that had routinely found credibility in the courts of oppression. It is no secret that dominant narratives come from the dominant and moneyed classes in our society.”

The day before Zuma’s letter, the Supreme Court of Appeal upheld a judgment that said Zuma should repay at least R16-million which the state had spent on his personal legal fees. During his time as president, Zuma repeatedly delayed cases against him by using the state’s budget to defend, obstruct and appeal matters in court.

“Broadly speaking, I believe, having examined how the courts have dealt with cases involving my constitutional rights, I came to the conclusion that there is inexplicable judicial antipathy towards me,” said Zuma.

“I do not accept that I committed contempt of court when I decided not to participate in the Commission proceedings in circumstances where my rights would be violated. It is clear for all to see that nothing can persuade the Constitutional Court not to incarcerate me.”

While Zuma launched the State Capture Inquiry in January 2018, with Zondo as its head, he has repeatedly argued that its foundations were unlawful. Former Public Protector Thuli Madonsela recommended that Mogoeng, rather than the president, who was implicated in her State of Capture report, appoint an inquiry chair. Zuma took the matter to court and lost. He appealed, but Cyril Ramaphosa withdrew the appeal application when he became president.

While Zuma claims Zondo and the judiciary are biased against him, the reality appears to be the opposite. His comments about the “moneyed classes” getting a fairer shake ring true, but there’s no doubt, at least when it comes to court costs, that many of South Africa’s top lawyers have made a handsome income off Zuma’s cases.

While Zuma didn’t participate in any of the State Capture Inquiry’s Constitutional Court cases, it’s clear, as Madlanga’s comment and Mogoeng’s directive suggests, the justices were cautious not to send the former president straight to prison, despite his obvious failure to adhere to the court’s order, without hearing his views.

Zuma claimed he was being treated unfairly, but the Constitutional Court criticised Zondo for not taking a harder line on the former president, suggesting he had been treated unequally compared to an average citizen – treated with kid gloves because of his status.

Zuma is playing a political game with a judicial process. He recently questioned the foundations of South Africa’s constitutional democracy, suggesting the judiciary should not have any oversight over the executive.

In his letter on Wednesday, Zuma suggested his potential conviction could further the fight to diminish the judiciary, the only arm of the South African state that called him to account during his ruinous reign, albeit while being careful not to step on other tiers’ toes.

Zuma’s letter said: “As stated above, I am ready to become a prisoner of the Constitutional Court and since I cannot appeal or review what I see as a gross irregularity, my imprisonment would become the soil on which future struggles for a judiciary that sees itself as a servant of the Constitution and the people rather than an instrument for advancing dominant political narratives,” he said.

The former president appears to be trying to push the Constitutional Court justices into a corner, suggesting his conviction will result in social and political unrest. It’s a crisis of Zuma’s own making as he slanders the judiciary that will have no choice but to judge him in absentia.

What happens next? Sentencing someone straight to prison for a civil contempt case appears unprecedented, so Zuma might avoid direct jail time, although his response to the court doesn’t do him any favours.

If Zuma is sent to jail, will his suggested threats of social unrest come true? The former president appears to have at least some support from a coalition of fellow corruption suspects, from Ace Magashule to Julius Malema and their allies and supporters.

There’s been no indication, however, that any group has or is able to mobilise a mass movement behind Zuma’s current cause. DM