Court orders government to provide all schoolchildren with a daily meal 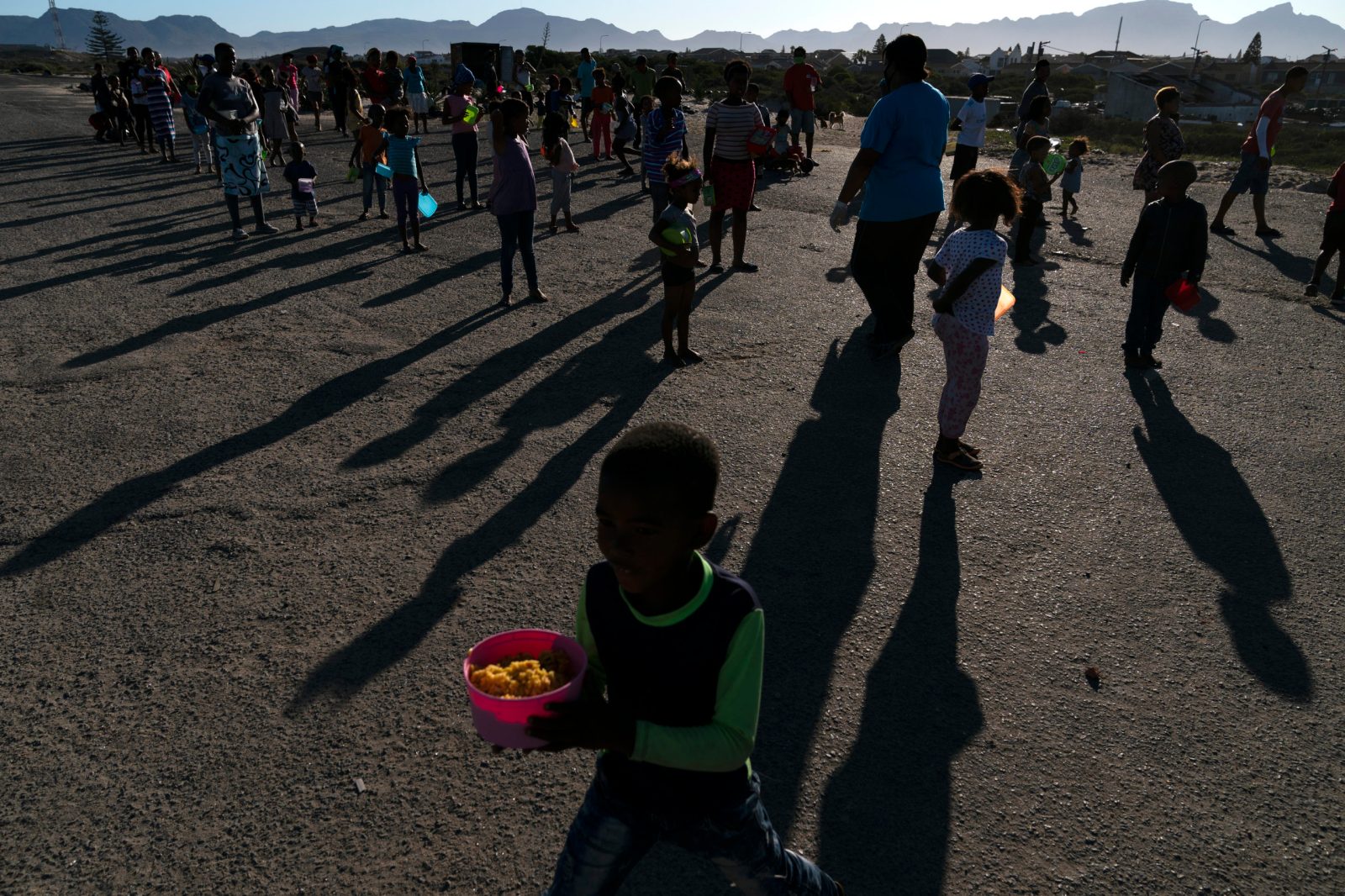 On Friday, the Gauteng High Court ordered the Department of Basic Education and provincial education ministers to restart the National School Nutrition Programme. And in the Eastern Cape, police have admitted using stun grenades to disperse a group of frustrated health workers. Also, the Gift of the Givers says this lockdown has revealed levels of hunger worse than it has ever seen in its 28-year existence.

Scroll through the gallery below to view the latest Covid-19 numbers available on 17 July at the district level. All maps are sourced from provincial health departments. However, Free State, Gauteng, Eastern Cape, Limpopo and Mpumalanga did not provide an update by the time of publishing. 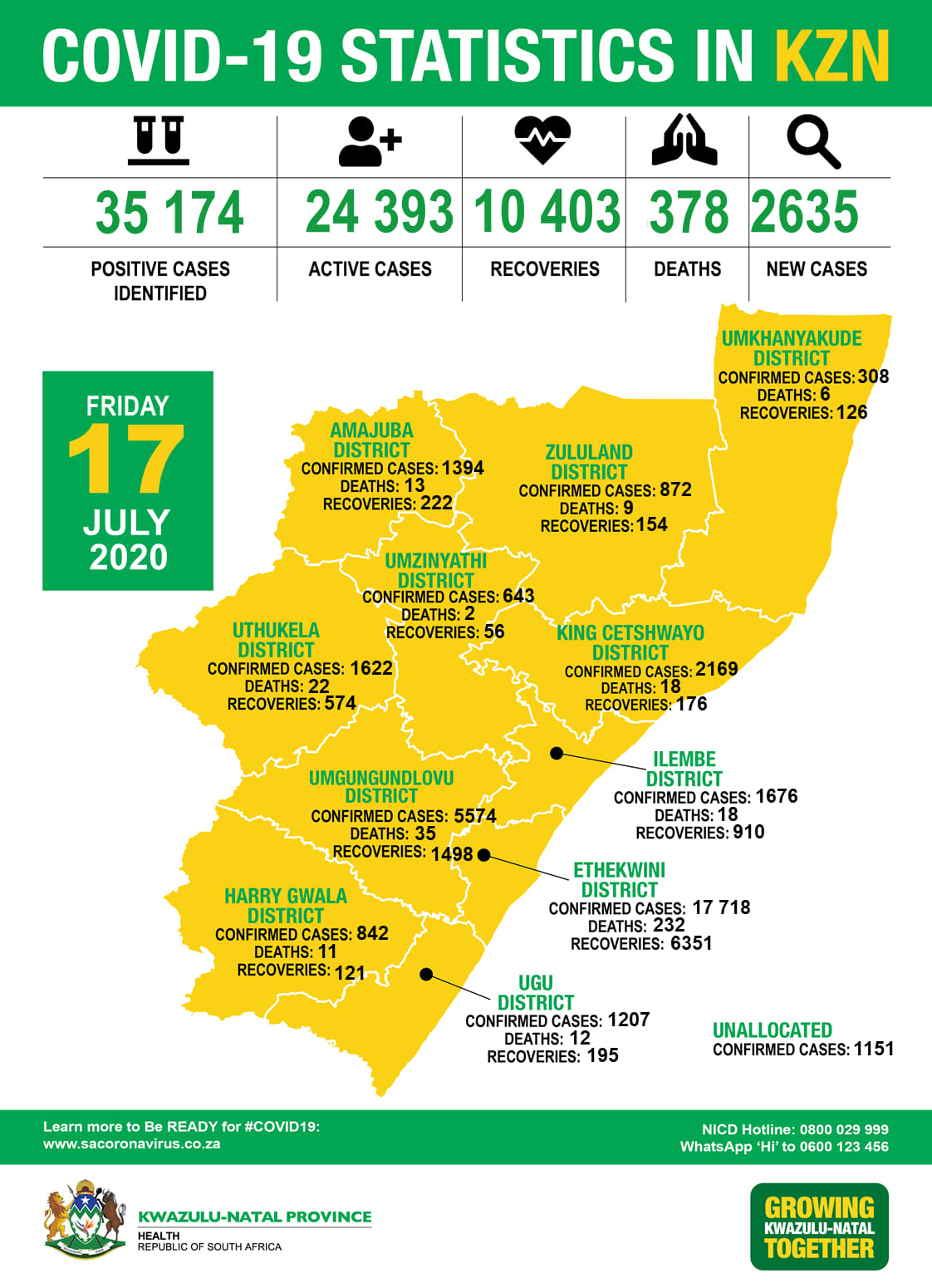 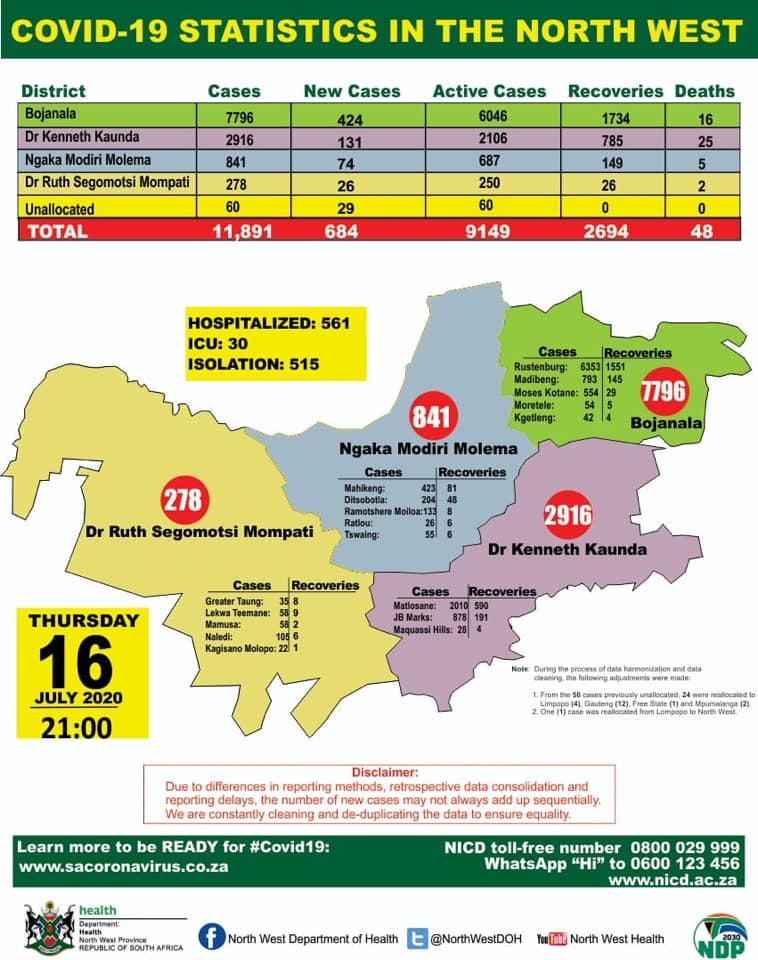 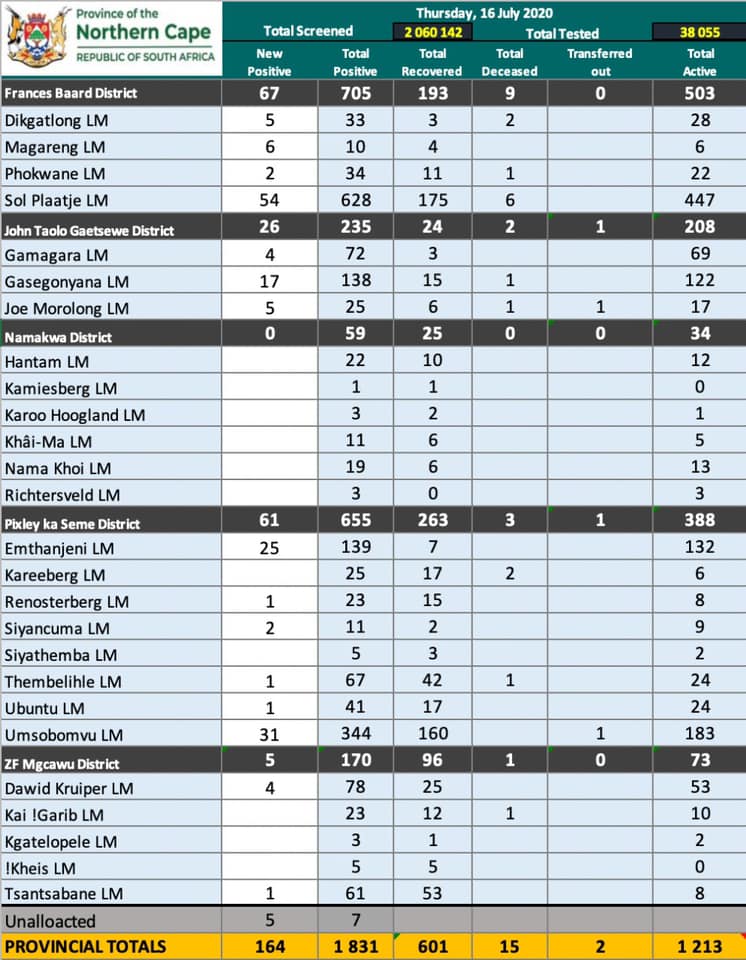 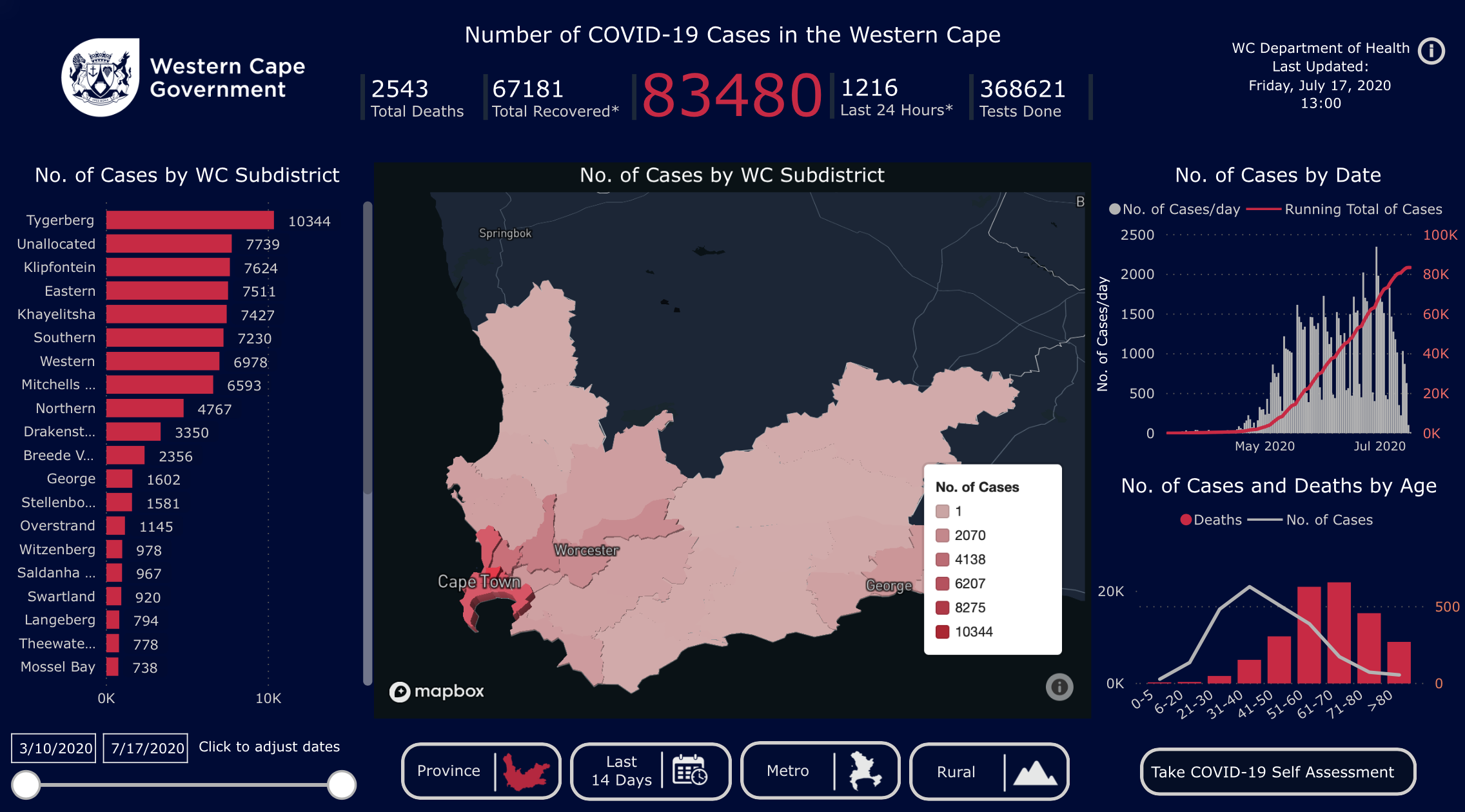 On Friday, the Gauteng North High Court ordered the Department of Basic Education to resume its National School Nutrition Programme for all learners immediately, even if they are from grades that have not yet returned to school. The case was brought by SECTION27 on behalf of Equal Education and two school governing bodies in Limpopo. It was opposed by the Minister of Basic Education.

In the words of Judge Sulet Potterill, “The essence of this matter can be aptly captured as ‘For now I ask no more than the justice of eating.’”

The court declared access to basic nutrition for learners is a constitutional right that is essential for the realisation of the right to basic education. She ruled that the minister and the education MECs from eight provinces had violated that right, noting: “Continued breach by the Minister and MECs will leave millions of children hungry through the cold winter and as long as lockdown lasts. Hunger is not an issue of charity, but one of justice.”

Furthermore, Potterill granted a supervisory order requiring that the minister and MECs each develop a plan to resume the programme fully (within 10 days) and then submit reports to the court and the applicants every 15 days until the order is “discharged by this Court”.

This judgement is one of the most important statements of enduring constitutional rights in relation to the impact of the lockdown. A full report by Maverick Citizen on the judgment will follow at the weekend.

Get up to speed with this case in the meantime, here, here and here.

Police have admitted to using riot shields and stun grenades to disperse a group of community health workers at the Eastern Cape Department of Health head office in Bhisho late on Thursday night. The group had arrived at the building for a meeting with a senior manager that day, only to be told he was at a funeral. They had no money to return home, so decided to sleep at the building until their appointment on Friday.

As Estelle Ellis writes, they are seeking permanent employment as some have been working on a three-month contract for the department since 1992. They are all frontline workers who have been part of the department’s efforts to screen people for Covid-19 and other infections, as well as helping to locate people who have defaulted on their HIV and TB medications.

“It is the worst amount of hunger in the 28 years of the Gift of the Givers,” said Dr Imtiaz Sooliman, who founded the organisation in 1992 in South Africa. He was speaking after distributing food parcels in Peddie in the Eastern Cape last week. He said people sang and danced as the truck arrived; they had only received 25 food parcels since the start of lockdown and had resorted to eating wild plants. As Justin Brown reports, Sooliman said the organisation’s call centres had never been so busy.

In KwaZulu-Natal, staff haven’t been working at Montebello hospital since Monday because of intimidation outside the hospital and unsafe working conditions inside. Local residents have been demanding jobs at the hospital since 2015, but protests were sparked over the last two weeks after new workers were apparently employed from outside the area.

Hospital staff have reported receiving threats and being barred entry to the hospital. Patients have been relocated to Stanger hospital, discharged or moved by their families. Nompendulo Ngubane reports that the KZN health department has declined to comment.

Gauteng MEC for Health, Dr Bandile Masuku, is confident the province is prepared to weather the Covid-19 storm. During a webinar with Maverick Citizen editor Mark Heywood, Masuku emphasised that the province is not yet experiencing the peak. He said the province “knew the storm was coming” as it is a densely populated urban hub with a highly mobile population. However, it did not foresee that it would not be the first province to reach the peak.

He said the province has a steady supply of oxygen and has set up a hospital bed management team to ensure a seamless flow of patients.

Masuku defended the government’s new regulations on taxi load capacity and the ban on alcohol, saying both decisions were about balance. He said the alcohol ban would lessen the burden on hospitals and the new taxi rules are “justified and supported” by science, and allows for the reopening of the economy. Estelle Ellis reports.

The ban on the sale of alcohol and the imposition of a night-time curfew has been the last straw for restaurants struggling to make ends meet since the start of lockdown. Bianca Coleman spoke to restaurateurs about what is at stake and what can be done to save the industry.

As debate over the reclosing of schools rages on, matrics are trying to get through their schoolwork while missing their friends and the year of excitement that could have been. Ayanda Mthethwa spoke to a number of learners about their experiences of being schooled during a pandemic.

Saturday marks the 11th international Mandela Day, and neither the lockdown nor the pandemic have stopped civil society organisations from organising ways to commemorate the day. Karabo Mafolo and Sandisiwe Shoba have put together a list of how to lend a helping hand (safely), while Shani Reddy has compiled a guide for those who would like to help out from home. DM/MC.