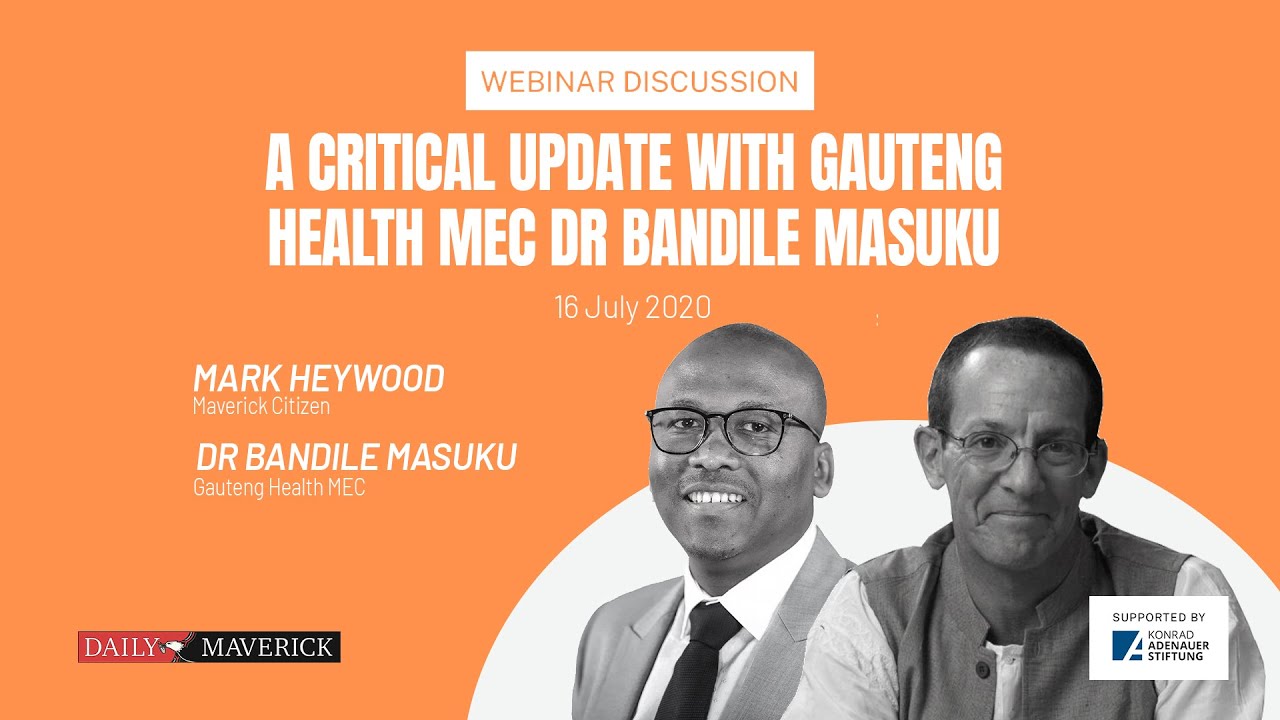 Gauteng MEC for Health Dr Bandile Masuku has defended the government’s controversial rule that taxis are allowed to operate at 100% capacity provided they keep windows open and everybody wears masks. Masuku was talking to Maverick Citizen editor Mark Heywood during a lunchtime webinar.

New lockdown regulations that allow minibus taxis to operate over short distances, with windows open and with passengers and drivers wearing masks and sanitising their hands was a balancing act, but Gauteng Health MEC Bandile Masuku said he believes it is justified.

“A lot of work was done in this regard,” Masuku said, referring to research on how multidrug-resistant tuberculosis spread in minibus taxis.

“The evidence indicates that with some level of social distancing and ventilation the risk of infection decreases. Those most at risk are the taxi conductors and driver. The regulations were an attempt to mitigate that.”

He said research done in the New York subway system also indicated that there was a decreased chance of infection in densely populated areas if people were moving quickly.

“We could not be absolutist in this regard,” he said. “We had to make sure that we got some form of social cohesion to win this battle.

“Personally, I feel that the balance should be there. We should give it a good shot. We should be agile enough to respond to problems. But the whole point is that we need to open up the economy – we cannot completely collapse the economy and the industry itself.”

“The team will look daily at how to direct the flow of patients to hospitals. It reduces the panic. This way the Emergency Medical Services know where to go. This is work we have been doing with the private sector. The more we master the bed management system, the easier it will be for us to deal with it.

“All of us have been talking about the peak. We are not there yet in Gauteng. A number of things are defining Gauteng. We have a high number of confirmed cases and the highest number of active cases. Our recovery rate is lagging quite dramatically. Most of our active cases have mild or no symptoms and do not require active medical attention.”

He described what the province is now experiencing as “the surge”.

“We knew the storm was coming. This is an urban province. It spreads fast in high-density areas. Gauteng did expect to have the highest number of infections. One out of four people in South Africa lives in Gauteng and the province has a number of densely populated areas. As the country’s economic hub the population is highly mobile and this underlines the speed at which the virus is spreading.

“The only thing that didn’t happen was that we thought we would be first to reach the peak.”

Masuku explained that models predicting the spread of the virus through South Africa indicated that the province would be able to get through June without too many problems but that the number of infections would start to peak by the end of July until mid-August and September.

“We chose to use the Covid-19 pandemic to make some fundamental changes to our health system,” Masuku said. He said that by refurbishing and repurposing some of the wards at public hospitals in the province they were able to add another 600 beds, while a further 1,400 beds had been added by using alternative building technology.

“Field hospitals and tents are what we need at the moment,” he said. “We started off with Nasrec as an isolation facility but we knew we would have to upgrade to a field hospital.”

Masuku said their biggest challenge was to decongest health facilities and make sure queues are not too long.

“We are comfortable for now that we will ward off the storm.”

Masuku said informal settlements, areas with big industries like mines, and the business districts in Johannesburg and Tshwane were some of the hotspots in the province.

He said he was confident that the province’s hospitals had sufficient oxygen for patients who need it.

“We had a discussion with Afrox [the hospitals’ major supplier] on Saturday. Oxygen will be redirected from industry to the healthcare system. In some of our facilities there were problems with pressure and how the cylinders will be stored but we are working on it. The tanks are being installed – also at the Nasrec field hospital.”

He added that they were also making sure that facilities have beds that are fitted to provide oxygen to patients.

Masuku said that while critically ill patients will be admitted to tertiary hospitals and the field hospitals will be used for those who are less seriously ill, these patients should still be able to access oxygen should they need it.

“Even at the tent we have at the Steve Biko hospital, we can give oxygen there [so] that patients do not lose any time.

“We must just put the shoulder to the wheel. What keeps us motivated is the motivation and resilience in our healthcare workers.”

Masuku said he believed the province had enough ambulances “according to our calculations” and vehicles that were in the possession of municipalities will also be used. “I am quite confident where I am.”

He said 9,000 medical professionals had applied to be placed on the province’s database for work during the pandemic.

“We can pay them. People should volunteer, but at some point we should also look at unemployment.” He said they had engaged with a group of volunteers helping out at the Nasrec hospital. “We want to make sure that those who work there are fairly remunerated.”

He added that the province was privileged to have three medical schools and that this was helping a lot. “We are getting ready to open a fourth one at the University of Johannesburg. Those are our long-term plans.”

“A politician can’t take a decision on whether a patient needs a bed or oxygen. We have an advisory committee. We are using the medical schools to our advantage. We don’t want to put politics into anything..”

Over the short term, Masuku said the role of clinical associates and enrolled nurses will be very important.

“We must be dynamic and innovative. We want people to have freedom to think outside of the box on how we can do some of the things going forward.”

He added that their long-term strategy was to prevent as many infections as possible:

“The more infections you prevent, the more money you save.

“In the short term, there is a lot of effort from the Solidarity Fund and the private sector. Some departments in the province have given up part of their budgets to help us with resources.”

He said as far as the province’s strategy to fight Covid-19 went, the Gauteng Command Council was a “fairly high level” structure that involved the premier, MECs, the provincial police commissioner and the heads of department.

“We have the command centre which is more operational in nature.” He explained that this body includes civil society, private healthcare, municipal managers, Home Affairs and also has a programme involving community-based organisations.

“The command centre has six pillars: Public health, economic response and relief, social security, the capacity of state to deliver and social solidarity. Social solidarity has been underdeveloped in our response so far. We had to mitigate between lockdown and mobilising communities.”

He said they were establishing community-based structures to build social cohesion at that level.

With regards to treatment options, Masuku said they are “listening to the clinicians”.

“A politician can’t take a decision on whether a patient needs a bed or oxygen. We have an advisory committee. We are using the medical schools to our advantage. We don’t want to put politics into anything. The hospitals are having mortality and morbidity meetings to discuss how to improve patient outcomes. We are very grateful of the work the clinicians are doing and their advice.”

He defended the new ban on alcohol sales.

“We need to create balance. At the moment we know the trauma-related pressures that we feel are a direct consequence of alcohol use. Look at the trauma unit at Charlotte Maxeke Hospital. That unit has never been empty. [For the] two long weekends [during lockdown] when the trauma unit would have been packed, it was absolutely empty. On that Monday when the alcohol ban was lifted, all the trauma units were buzzing with injuries that were all alcohol related.”

He said the best thing people can do at the moment is to stay at home, practise personal distancing and wash their hands regularly.

“Broken as it is, our healthcare system is very resilient. It can carry us through.” DM/MC