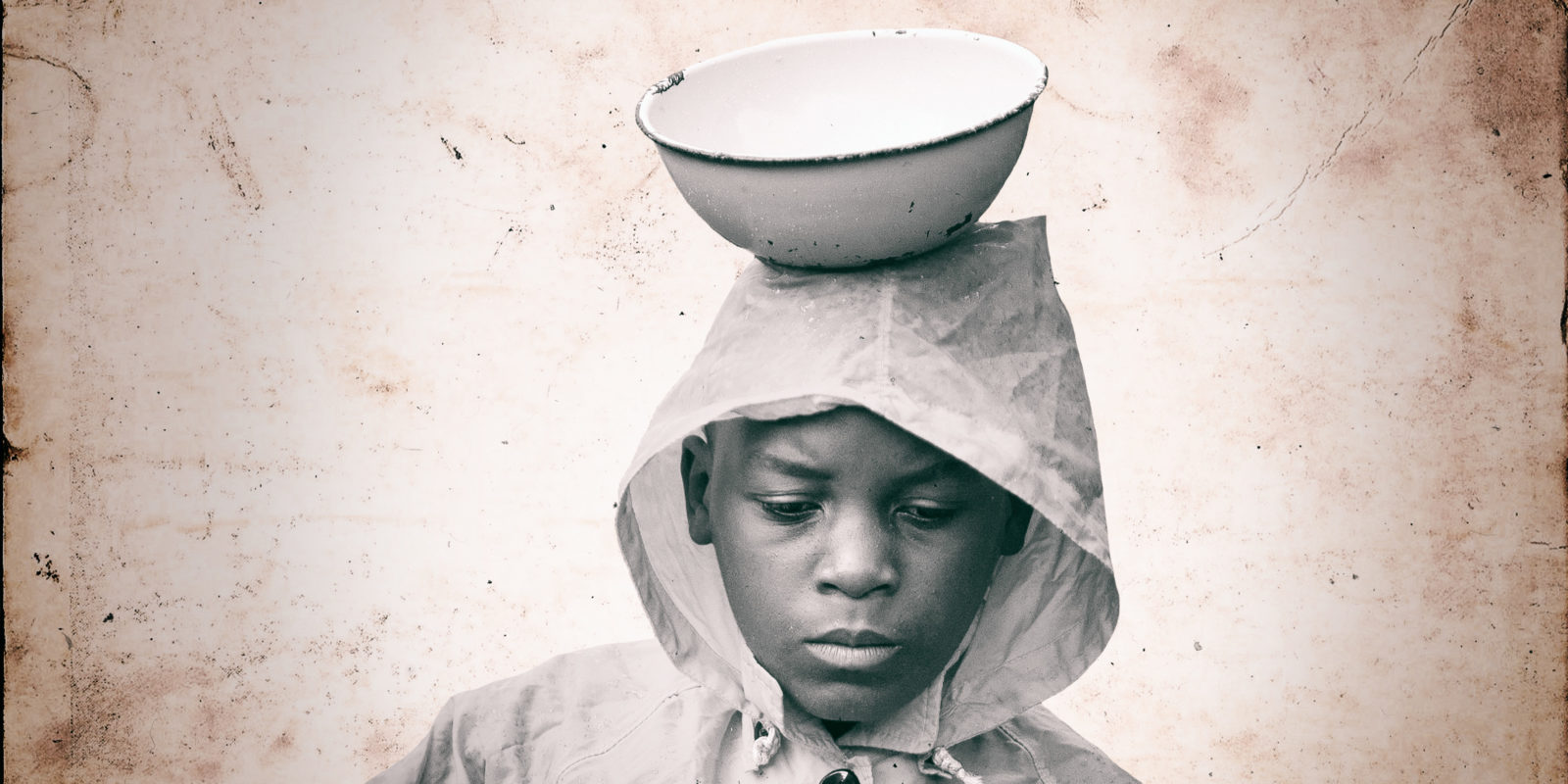 A South African child stands in line as he waits for food in Masiphumelele, Cape Town, South Africa, 25 May 2020. (Photo: EPA-EFE/NIC BOTHMA)

This case is probably one of the most important of the democratic era. Most immediately it is about the lives of millions of children, their hunger and their ability to reap the benefit of their right to education.

Another day in the court of the “new normal”. Except it was far from normal. Instead of squaring off in a court chamber, lawyers were squaring off over Zoom. As usual, the lawyers were robed and respectful. But the matter they were arguing was far from digital. In the words of Geoff Budlender SC, this was a matter about the hunger of “between three and four million schoolchildren” who that very same day were being denied their constitutional right to a school meal.

In another precedent and in recognition of the importance of the case it was also being live-streamed to learners on Facebook.

The background to this case has been reported in earlier articles (here and here) in Maverick Citizen. But, in essence, it revolves around the fact that when schools were closed on 18 March this year under the State of Disaster, so too was a national school feeding nutrition programme (NSNP) that had provided a daily meal for nine million learners. For many years this programme, run by the Department of Basic Education (DBE), has been a staple of the education system, and a recognition that learning cannot take place on an empty stomach.

During the absence of the NSNP, children have suffered greatly. Thus, when schools reopened on 8 June for Grades 8 and 12 there was an expectation that the NSNP would simultaneously resume for all children. The DG of the DBE had even promised as much, although the minister had backtracked on it.

After an extensive – but unsuccessful – correspondence led by SECTION27 to demand immediate resumption of the programme for all learners, Equal Education (EE) and two school governing bodies in Limpopo were forced to turn to the courts on an urgent basis. Faced with legal papers, the DBE changed its position, claiming it had the intention to restart the programme on 22 June, an intention that EE disputed, supporting their claim with a rapid one-day survey (on 23 June) which revealed many schools across the country had not started providing meals. Importantly, this survey was admitted by the judge as evidence in yesterday’s hearing.

Millions of children’s lives and well-being are at stake in this case. However, for a matter in which the stakes are so high the legal disputes ultimately were somewhat narrow and boiled down to two key issues.

First, the Department of Basic Education tried to suggest that Equal Education’s case was wrongly construed because they had never “refused” to resume the NSNP. Senior counsel, advocate MM Oosthuizen claimed that Equal Education had changed its case after receiving the government’s answer:

“From the outset the [EE] case was… about the alleged refusal to provide daily meals to all qualifying learners and not the actual receipt of daily meals.”

He tried to build much on the fact that there had never been a “refusal”, maintaining still that this was “litigation by ambush”. In fact, he argued, the DBE accepted its responsibilities. But it was “naive” to think that the minister and department “could immediately provide food” especially during an emergency.

Budlender, however, made mincemeat of these assertions. Calling the argument “bizarre” and “semantics” he explained that: “their defence is simply that they haven’t ‘refused’… but that’s not the issue. The issue is whether they will provide children with meals today. This case is about their failure to provide food.”

“They say they are going to do it one day… but EE doesn’t ask that ‘someday’ they undertake to provide food, it’s that they provide it now.”

At one point during Oosthuizen’s argument a clearly puzzled Acting Deputy Judge President Potterill asked: “But doesn’t a failure and a refusal boil down to the same thing?” Oosthuizen replied “No, my lady”, to which an unconvinced judge could only say, “Ohhh”.

Instead, Budlender argued that the DBE had kept “shifting the goalposts” and “backsliding” on dates, pointing to a paper trail of correspondence that revealed only “administrative chaos and confusion” about when the NSNP would resume.

Lawfare is conducted in restrained language, but Budlender had strong words about what had happened in this litigation and the refusal of the minister to accept responsibility and accountability. He summed up his opening argument thus:

“In the face of the DBE’s continued refusal I have to say that the minister and MECs are playing games with the court and the parents by putting up this case. They refuse to engage with the substance. They raise a semantic defence. Meanwhile, millions of children go hungry every day. It’s cynical and callous and time to put an end to it…”

Second, and much more important when it comes to constitutional law, the DBE tried to argue that children’s rights to “basic nutrition”, which are found in s28(1)(c) of the Constitution, are separate and therefore walled off from their right to a basic education in s29(1)(a).

What this meant, Oosthuizen argued, was that a specific legal duty on the DBE to provide poverty-stricken learners with food did not exist – and so the DBE could not be ordered to resume the NSNP or to report to the court on its progress in terms of the supervisory order sought by Equal Education.

This aspect of the argument was dealt with by Tembeka Ngcukaitobi, SC, as well as by advocate Karabo Ozah, representing the University of Cape Town’s Children’s Institute who had been admitted by the court as an amicus curiae and in her submissions addressed children’s rights under international law in particular.

Ngcukaitobi was emphatic: “We reject that.”

“Nutrition is a component of the right,” just like textbooks, toilets and desks. “Children cannot study on an empty stomach. Also, rights are interdependent and indivisible. They are not permitting a rigid separation.”

Significantly, during the course of the hearing, Ngcukaitobi’s argument also ranged across a series of fundamental rights, particularly dignity and equality, as well as pointing out the contradictions between the government’s legal argument in court and its actions and public statements boasting about the NSNP over the years.

Ngcukaitobi argued that, “In SA, where many learners are unable to access food, the government has accepted that it has to provide food to fulfill the Constitution.”

Later he told the court that, “Nothing is more undignified than starvation… this is precisely the sort of case where dignity plays a very important residual role.”

He also pointed out that, given the legacy of historical inequalities, “99.9% of these learners are black learners who are also in poor schools”, making it “especially important that they are assisted by the government”.

Locating his argument in a string of judgments by the Constitutional Court on socioeconomic rights, he told the judge that millions of children are in need of food support because their primary caregivers are unable (read too poor) to provide food:

“Kids are trapped between parents who are unable and a government that denies it has a responsibility.”

Turning to the request for a supervisory order, countering the claim by Oosthuizen that it was unnecessary, Ngcukaitobi said it was “not only appropriate but mandatory in these circumstances” and then gave three cogent reasons.

First, the department had “played fast and loose with the facts” necessitating the discipline of a structural order; second, it was necessary “where you have an egregious degree of violation, in this case, children being driven to starvation by a government policy that simply doesn’t care”. And third because this was a “continuous breach”, going on even as the court hearing took place.

“One cannot eat a piece of paper. What is necessary is food on the table,” he told the court.

In this respect, in many ways Oosthuizen had made the case for the applicants.  He revealed a lack of understanding of the fundamentals of constitutional law, that allowed Budlender and Ngcukaitobi to restate before the court basic principles of jurisprudence, such as the duty on the state to take care of the most vulnerable and those whose needs were most urgent (the famous Grootboom case). This was their response to a claim by the learned counsel for the DBE that he had “never heard of an interpretation” in which a poor child could claim that the right to education included her right to food, but a rich child (in the same family) could be told it didn’t.

“That would be an unusual family” quipped Budlender, before demolishing it with constitutional law 101.

In their affidavits, the DBE had told the court that the NSNP had resumed on 22 June. However – reinforcing the rationale for a supervisory order – Oosthuizen appeared to think otherwise, boasting that when a further eight grades return to school on 6 July, “the terrible problem of hunger would be reduced by two-thirds”; and when all other grades return on 3 August “the problem will have disappeared”.

This case is probably one of the most important of the democratic era. Most immediately it is about the lives of millions of children, their hunger and their ability to reap the benefit of their right to education. But, as Professor Sandy Liebenberg has recently written, it is also about the duties that fall on the state when it comes to rights to food and education as well as the power of courts to ensure those duties are fulfilled. Like the Treatment Action Campaign case 18 years ago, which fought for the rights of mothers to access lifesaving medication to prevent the transmission of HIV to the baby, it will undoubtedly add to the annals of South Africa’s most important human rights jurisprudence and have far-reaching global implications.

Recognising this, at the end of the day as the virtual court rose and lawyers prepared to exit their Zoom meeting, Judge Potterill reserved judgment, promising that she would hand down the judgement “as soon as humanly possible.”

For many hungry children and their parents that promise couldn’t come soon enough. DM/MC

This case is rich in rights and constitutional law. A reporter’s summary of a day in Zoom can do it little justice. For those interested in reading more on human rights law and its application in South Africa I would recommend reading Equal Education’s Heads of Argument which can be found here. – Mark Heywood, Maverick Citizen Editor