France gives a helping hand, reclosing of schools is under discussion, and new study exposes the brutal impact of lockdown 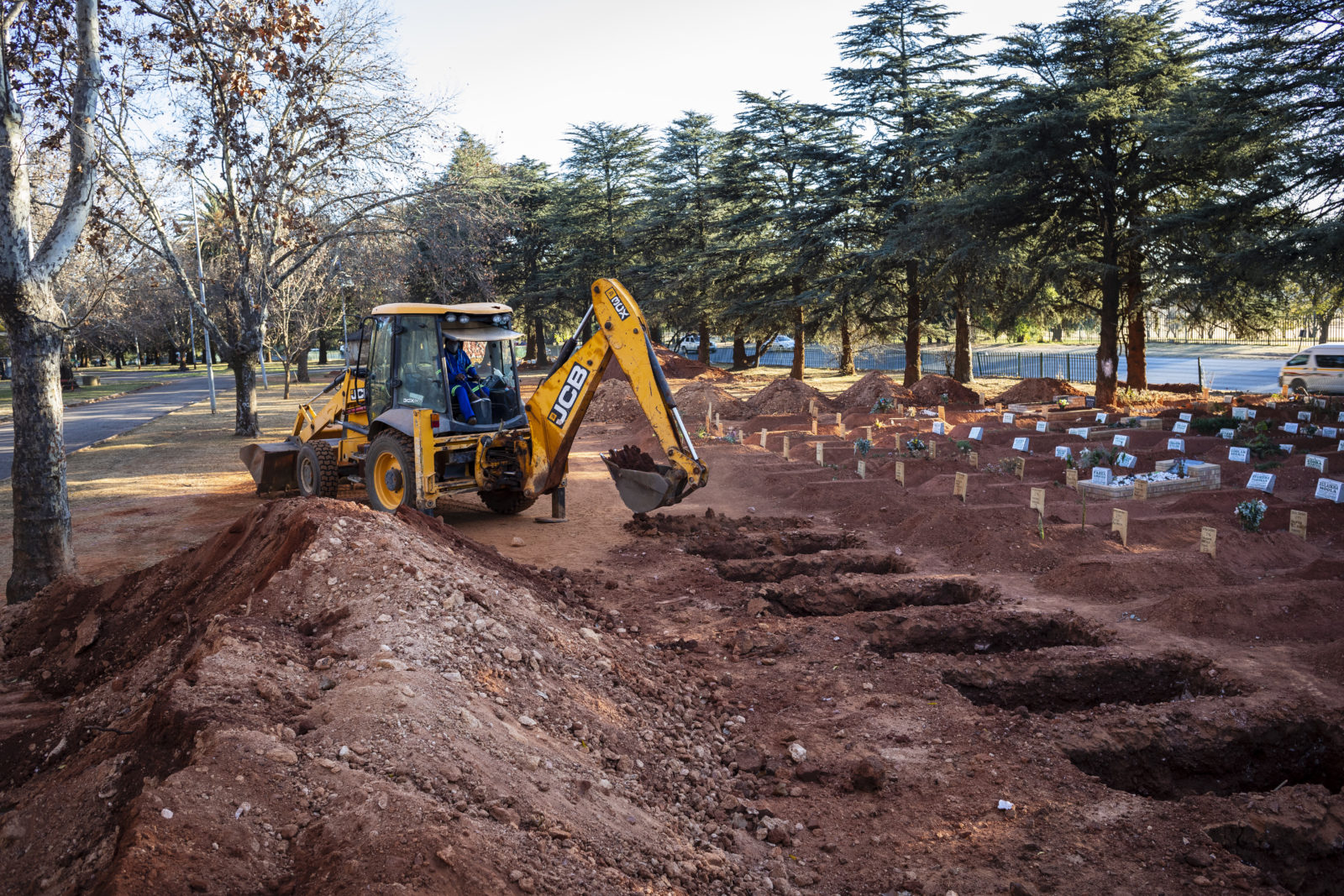 Graves are dug in the Muslim quarter of Westpark Cemetery, Johannesburg, after health authorities ordered more to be prepared for an expected surge in coronavirus-related deaths. (Photo: EPA-EFE / Kim Ludbrook)

On Wednesday, a new study showed the extent to which Covid-19 and the lockdown have deepened unemployment, hunger and a health crisis in South Africa. Meanwhile, the College of Public Health Medicine has called on President Cyril Ramaphosa to reverse the new rules for taxis as they pose a significant health risk. The Department of Basic Education and teachers’ trade unions will discuss the possibility of closing schools during the Covid-19 peak. And France is planning to donate medical supplies and money to SA’s Covid-19 response.

Scroll through the gallery below to view the latest Covid-19 numbers available on 15 July at the district level. All maps are sourced from provincial health departments; however, Free State and Eastern Cape did not provide an update by the time of publishing:

Three million jobs were lost between February and April and almost half of households have reported going hungry in the past three months. This is according to a new household survey made public on Wednesday 15 July, which is the largest yet to analyse the impact of the Covid-19 lockdown and health emergency in South Africa. Ferial Haffajee spoke to the researchers about the key findings of this colossal project. Amy Green unpacks their numbers on the dramatic surge in hunger, while Kathryn Cleary explains what the data says about the burden on children. Maverick Citizen has published the original overview chapter in full.

In rural northern KwaZulu-Natal, Sister Priscilla Dlamini has made 10 applications for Covid-19 food parcels and nothing has come their way. The Catholic nun runs a hospice, feeding centre and three créches that serve more than 700 families. She explains that food parcel distribution depends on personalities and political party support. Angus Begg spoke to her and other civil society initiatives about their struggle to get government support.

The decision to allow taxis to load to 100% capacity could substantially increase the risk of Covid-19 transmission, according to the College of Public Health Medicine in South Africa. The public health specialists have called on President Cyril Ramaphosa and his Cabinet to reconsider the decision. It recommends that windows on both sides of the vehicle must be open to allow for ventilation and taxis should carry no more than 50% of their carrying capacity. As Bheki Simelane writes, it argues these are not optional measures and must be implemented in combination.

The Department of Basic Education has agreed to consultations with all stakeholders in the education sector about the possibility of reclosing schools. This comes after a number of teachers’ trade unions called for the reclosing of schools during the peak in Covid-19 cases. However, the department cancelled Minister Angie Motshekga’s meeting with teachers’ unions scheduled for Wednesday 15 July. As Ayanda Mthethwa writes, the department has said these meetings will inform the minister’s proposals to Cabinet this weekend.

France is planning to donate medical supplies and equipment to South Africa for its response to Covid-19. In addition, it is discussing with some European Union members the possibility of providing South Africa with more economic help to counteract the blow from the pandemic and lockdown. As Peter Fabricius writes, the French embassy has been in contact with the Department of Health about this potential help.

Justice and Correctional Services Minister Ronald Lamola reiterated that the onus is on those who manage buildings, shops, taxis or any public places to ensure everyone allowed in is wearing a mask. The punishment will fall on them – “there will be no mass prosecution of people”, he said during a briefing. People can expect to see more roadblocks and stop and searches, said Police Minister Bheki Cele.

The Western Cape and Gauteng have just under two-thirds of the country’s total confirmed Covid-19 infections and both expect to see a peak soon. Kathryn Cleary asked them how they are preparing their healthcare systems.

A Groote Schuur medical intern describes what her day is like in a Covid-19 ward – putting on personal protective equipment as if it’s armour, calling families to tell them their loved one has died and trying hard to “be a light for your patients” even when you yourself are anxious and tired. Read her interview with Elna Schütz here.

Eastern Cape Premier Oscar Mabuyane has said the province faces a possible shortage of N95 masks for its frontline health workers. He has asked the national Department of Health to help, as the province only has about one to two weeks’ stock of other personal protective equipment too. Emergency bulk orders have been placed for gloves, gowns, sanitisers and surgical masks. He said 28 health workers have died from Covid-19 – 57% of whom are not doctors and nurses but are employed “in other categories in the health sector”.

A piece of positive news is that 92.7% of contacts have been traced – an increase of 11% in one week – and the first 10 ventilators donated by the United States have arrived. In addition, South African National Defence Force nurses and clinical associates have been deployed provincewide. As Estelle Ellis reports, the Solidarity Fund has promised an extra R75-million and the Development Bank of Southern Africa has also donated resources. DM/MC