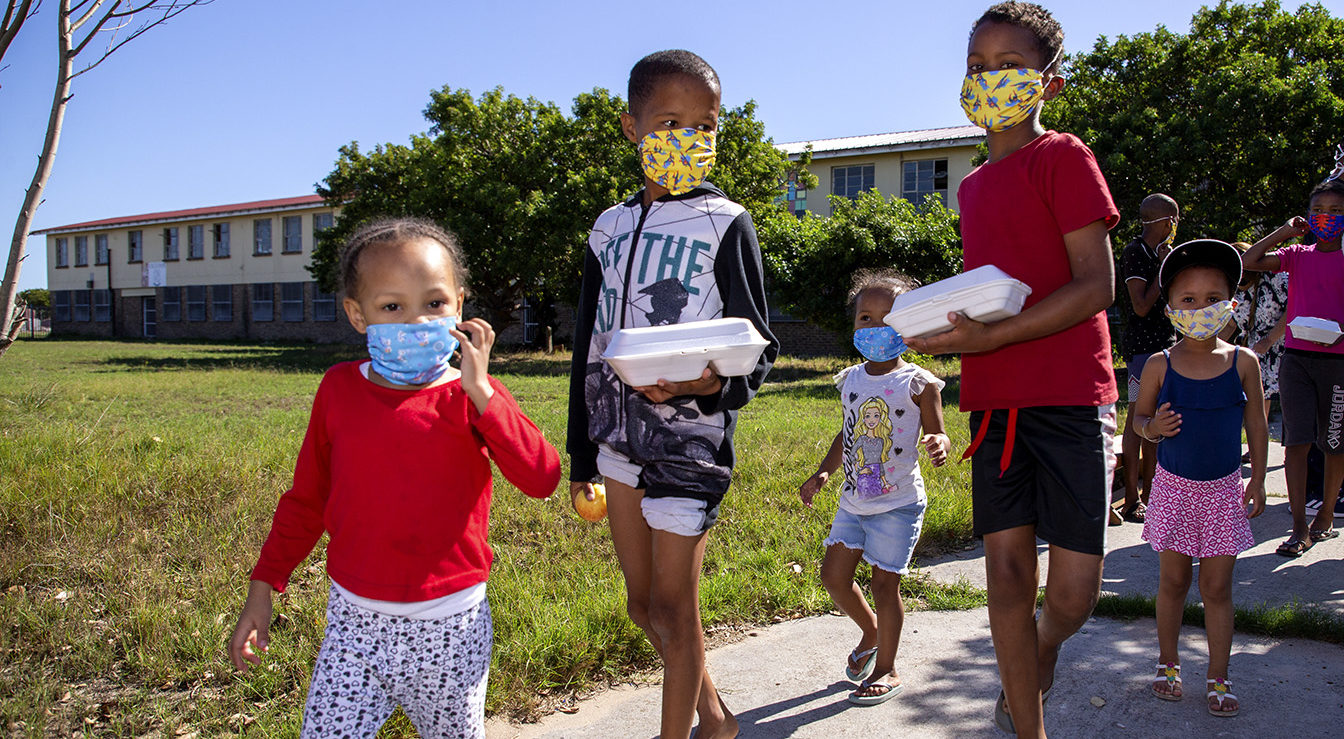 CAPE TOWN, SOUTH AFRICA - APRIL 28: Children of all ages wearing face masks, receive some food during a feeding scheme at Excelsior Senior Secondary School in Belhar on April 28, 2020 in Cape Town, South Africa. Learners were encouraged to wear a mask and observe social distancing to minimise the spread of COVID-19. According to media reports, nationwide lockdown has put economic pressure on households and families across the country. (Photo: Gallo Images/Roger Sedres)

Findings of a survey released today reveal that children may be the pandemic’s greatest victims and that South Africa’s progress towards ending hunger may have been reversed. The survey includes data from roughly 7,000 respondents across the country who were asked about hunger, health and employment between May and June this year.

Professor Servaas van der Berg, an economist and National Research Foundation Chair in Social Policy from Stellenbosch University, is one of the scientists involved in the survey.

“In a strange way, the virus has the least effect on children, but children are going to be the greatest victims of the pandemic,” says van der Berg.

The numbers tell a sad story

Nearly half (47%) of all respondents reported running out of money for food in April, the first month of the country’s hard lockdown. Adding to this, 15% of respondents said that a child in the household had gone hungry the previous week (prior to the survey interview).

In households with children, 8% of respondents reported frequent hunger, which is defined as three or more days per week.

To put these numbers into perspective, the General Household Survey (GHS) conducted in 2018 found that 16% of households in South Africa reported child hunger, meaning that a child went hungry at some point in the last year.

The NIDS-CRAM findings released today are reflective of the beginning of the lockdown period, and, as van der Berg explains, can’t be compared to the GHS data, which reflects an entire year.

“But then it went up and was almost stuck at that level, and gradually declined again. It’s clear that what drove the first part of that was the expansion of the Child Support Grant (CSG)… then one had the recession and in the recession it went up, and after that we have had little economic growth so it went down very slowly,” says van der Berg.

“With the 2007/8 recession it did show an increase [in child hunger] but not a very great increase; one would expect the increase to be much higher [during the pandemic] because of the sharpness and severity of the [economic] decline,” he says.

“It appears as if most of the decline we’ve seen in hunger has been reversed… then the question is, for how long – is it permanent or short-term?”

Loss of income, no money for food and looming ECD closures

The noticeable rise in child and household hunger during lockdown can largely be linked to two things: a loss of income and running out of money for food, says van der Berg. As the lockdown came into place, families were left unable to work and this loss of income has become a driving factor for South Africa’s growing child hunger crisis.

“We’ve got a very desperate situation in very many households and it’s not something that will return very easily to normal, even if the economy was to become fully open.

“Many informal jobs won’t be available, but also some small businesses may no longer exist, which links on to something else which is [Early Childhood Development/ECD] centres.”

Van der Berg says the lockdown has threatened the viability of ECD centres, warning that many of them will not open again.

“That’s another income for quite a number of people, and like many others they’ve simply lost their source of income and they may no longer be able to offer that service, which is problematic from the perspective of the parents who require someone to look after the children,” he says.

One of the recommendations made by authors of the paper is to provide greater financial support to ECD centres.

“The focus of some of our recommendations is to spend more money [on young children] even if it is very difficult to find the money. The long term consequences for children are massive, and it’s not only from [the pandemic] but also from the schools [closing] during lockdown.”

A way forward in a time of crisis

While the NIDS-CRAM findings may paint a grim picture for the immediate future of South Africa’s children, authors’ recommendations suggest a way forward that, if implemented, may greatly improve the situation. These recommendations are included in papers published today alongside the release of the survey data.

In terms of social grants, van der Berg says the CSG is not enough to feed a child or a family for a month, and needs to be supplemented by other income.

“The CSG was doing a very good job of keeping many, many children – not all – out of hunger, even though that might not have been adequate in terms of nutrition. So it did well before the pandemic. But now that the other sources of income that many households have has fallen away, it clearly is inadequate… it can no longer on its own keep households and their children out of deep poverty,” he says.

In this regard, it is recommended that government reinstate a per child per month top-up of the grant.

“Initially they increased the CSG by R350 for one month in May, and then in June that fell away and in its place came R500 for the caregiver… so if you’ve got two children, clearly you’re worse off from June than you were in May.

“It would be better to keep this at a level per child, because in a sense you’re now favouring households which have got one child, and if you’ve got four children, then that R500 is very little compared to the past,” says van der Berg.

The authors also recommend that the functioning of new grants, such as the Covid-19 relief grant, should be improved.

In terms of schools, van der Berg and his co-authors recommend that the National School Nutrition Programme (NSNP) be immediately reinstated to ensure all learners, regardless of school attendance, are provided with at least one meal per day. On top of this, it’s recommended that schools distribute perishable foods for learners to have at home during weekends.

“When I did a bit of calculations as to what does [a school meal] convert to in terms of money, it’s not so much – it’s about R80 per month. If the household could provide this food at the same cost as the school, R80 would make up for the loss in school meals because it costs about R3,60 per child per meal according to the data we’ve got,” says van der Berg.

While this is important, he adds that even though the CSG top-up is a larger amount of money, it means that the child and other members of the household will be competing for its use. A school meal is a certainty for a child, as opposed possibly competing for food at home. “In those circumstances, the school meal takes on extra importance.”

Earlier this month, Equal Education and two schools in Limpopo sued the Minister of Basic Education and the MEC for Education to force the reopening of the NSNP to all learners, regardless of whether they’d been phased back into school.

Sasha Stevenson of SECTION27, which represented the applicants in this case, describes the hardships faced by families across the country following the suspension of the programme.

“The families we spoke to talk about their children going hungry and lacking energy, families fighting over food, children finding work to support their families. Learners who returned to school and were being fed described their guilt at receiving a meal when their siblings remained at home and hungry,” she says.

“The NSNP is one of the most successful anti-poverty and anti-child hunger interventions of the State. To fail to continue it in this time of national crisis is unforgivable.”

Stevenson also criticised the adequacy of measures put in place to feed children during the lockdown and school closures.

“While the Department of Social Development intended to include families of learners who would normally receive NSNP meals in their plans for food relief, what they actually rolled out was a drop in the ocean,” she says.

“On 29 May, after two months of the State of Disaster, government claimed to have provided a total of 788,000 food parcels to people in need. By comparison, the NSNP feeds over nine million learners every day.” DM/MC

Note: SECTION27 is quoted in this article. Spotlight is published by SECTION27 and the TAC, but is editorially independent, an independence that the editors guard jealously. Spotlight is a member of the South African Press Council.