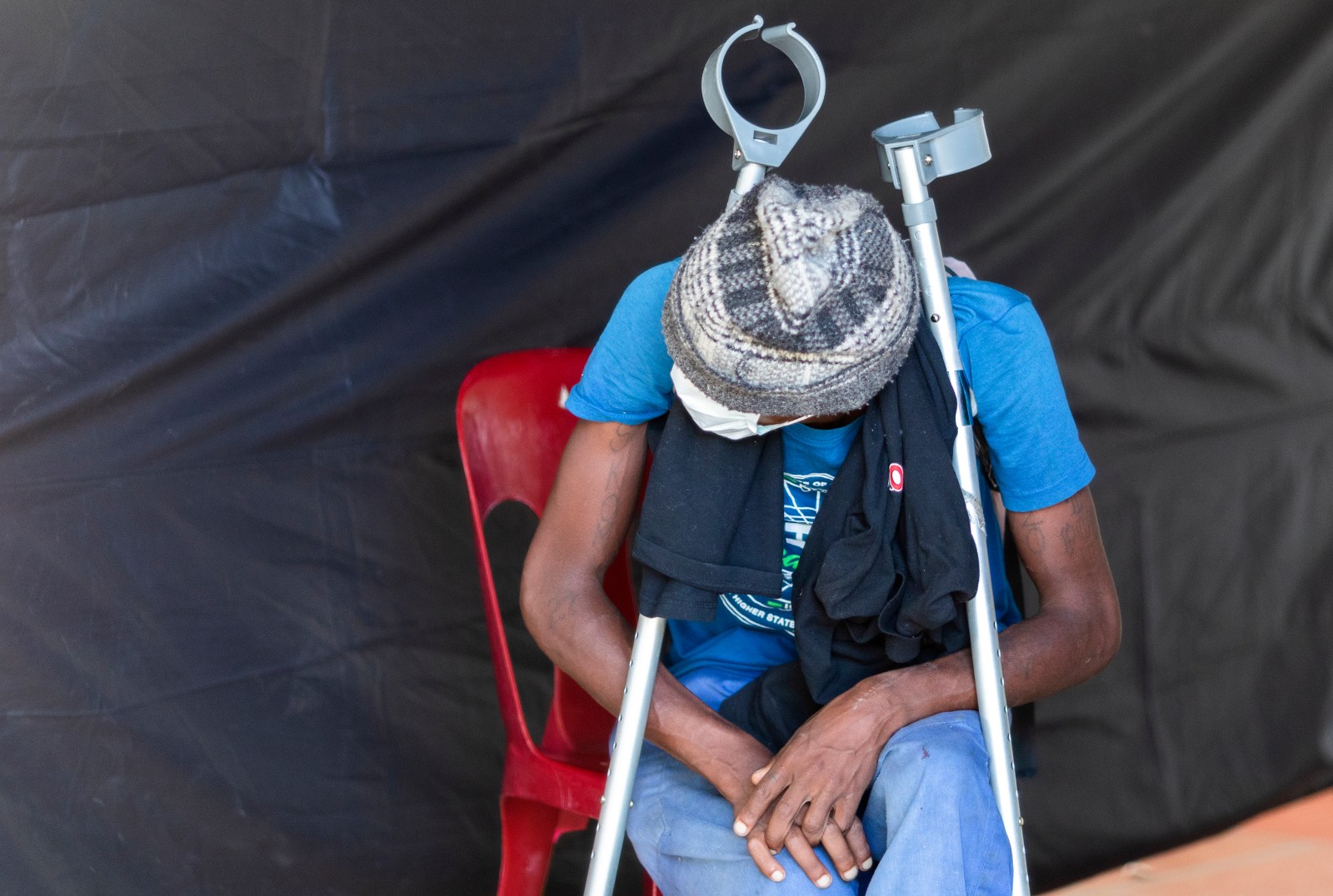 A homeless South African man waits to be screened and tested for Covid-19 during a media tour of the Strandfontein temporary homeless shelter site in Cape Town on 9 April 2020. The City of Cape Town has moved hundreds of homeless men and women from across the city into the controversial site. (Photo: EPA-EFE / Nic Bothma)

Things changed overnight in South Africa on 15 March, and it won’t be the last time they do. Daily Maverick’s Daily Digest will provide essential pieces of information about Covid-19 in South Africa each day. Please do read on to understand these issues more deeply.

Health Minister Zweli Mkhize has made the call for people to volunteer to help in the government’s response to Covid-19 in South Africa. New regulations gazetted on Wednesday stated that retired doctors and nurses, community service personnel, expanded public works workers, community-based organisations and non-governmental organisations will be recruited over the next week to help out in strategic areas.

The National Health Laboratory Service has said it has enough stocks to be able to do 15,000 Covid-19 tests a day for the next three months – and can increase it if necessary. It says it is not doing as many tests as it is capable of doing because the demand from provinces is limited. However, as Marcus Low writes, not everyone is convinced of this preparedness.

The two doctors who were forcibly quarantined in a Limpopo hospital last week after testing positive for Covid-19 have been released. They are ready to go back to work now that they have tested negative for the virus. However, their woes with the provincial health MEC Phophi Ramathuba are not yet over. As Kerry Cullinan writes, she continues to spread “falsehoods” about the doctors. As a result, they are considering legal action against Ramathuba.

Gauteng Premier David Makhura has warned that the province needs to redouble its response, despite rapidly increasing screening, as there is still much more to be done. Since 31 March, 27,000 people have been screened in the province. As Greg Nicolson reports, almost all 9,000 community healthcare workers have been trained to do screening and 607 healthcare professionals have been trained to do contact tracing, screening and testing.

However, schools in the province have been targeted by vandals since the start of the lockdown. In that time, 22 schools have been ransacked by burglars or suspected arsonists. In the latest incident, Bambazi High School in Bergville was set alight on Wednesday. As Ayanda Mthethwa reports, the Gauteng Department of Education has opened criminal cases for all of the incidents.

Meanwhile, KwaZulu-Natal’s health MEC Nomagugu Simelane-Zulu is investigating why the Covid-19 infections among staff and patients continue to rise at St Augustine’s Hospital. Simelane-Zulu has confirmed that there have been 66 positive cases and five Covid-19 related deaths at the hospital. Des Erasmus spoke to the hospital and the department of health.

Some hospitals and clinics in rural KwaZulu-Natal have already trained healthcare workers and modified facilities to prepare for patients who have Covid-19, according to the chair of the Rural Doctors Association of Southern Africa, Dr Lungile Hobe-Nxumalo. She talked through these preparations with Alicestine October.

Back in the city of Tshwane, the Pretoria High Court has dismissed an application by waste-picker groups to have their recycling recognised as an essential service. As Estelle Ellis writes, this is despite their pleas that, since their freedom of movement is restricted, they cannot access water, electricity, firewood or food.

Two trade unions have set up their own dedicated helplines for their members who have concerns related to the coronavirus. The South African Clothing and Textile Workers’ Union has launched a hotline dealing with questions around retirement funds, whereas Solidarity has created a crisis centre with staff who listen to and answer members’ questions. As Vincent Cruywagen reports, they have been inundated with calls.

Some unions, the Minerals Council SA and the government have agreed that 60% to 70% of mineworkers will go back to work on 16 or 17 April, according to Business Maverick. As Ed Stoddard writes, all agreed that screening will be done and those who are ill will be isolated or sent to the hospital.

Meanwhile, some travellers who arrived in South Africa have been deported to countries they have passports for but which they haven’t travelled to in years. Chanel Retief spoke to them about their experience of landing in a country where they know almost no one.

As the second week of the lockdown draws to a close, the Young Maverick Writers reflect on the past week and the long weekend ahead. They, and others around them, wonder if there really are just seven days to go before lockdown ends.

As Easter begins under very unexpected circumstances this year, Sandisiwe Shoba spoke to faith community leaders about how people are adapting important occasions such as Easter, Ramadan and Passover to a life under lockdown.

For many, online platforms provide a space where they can still connect with their communities. DM