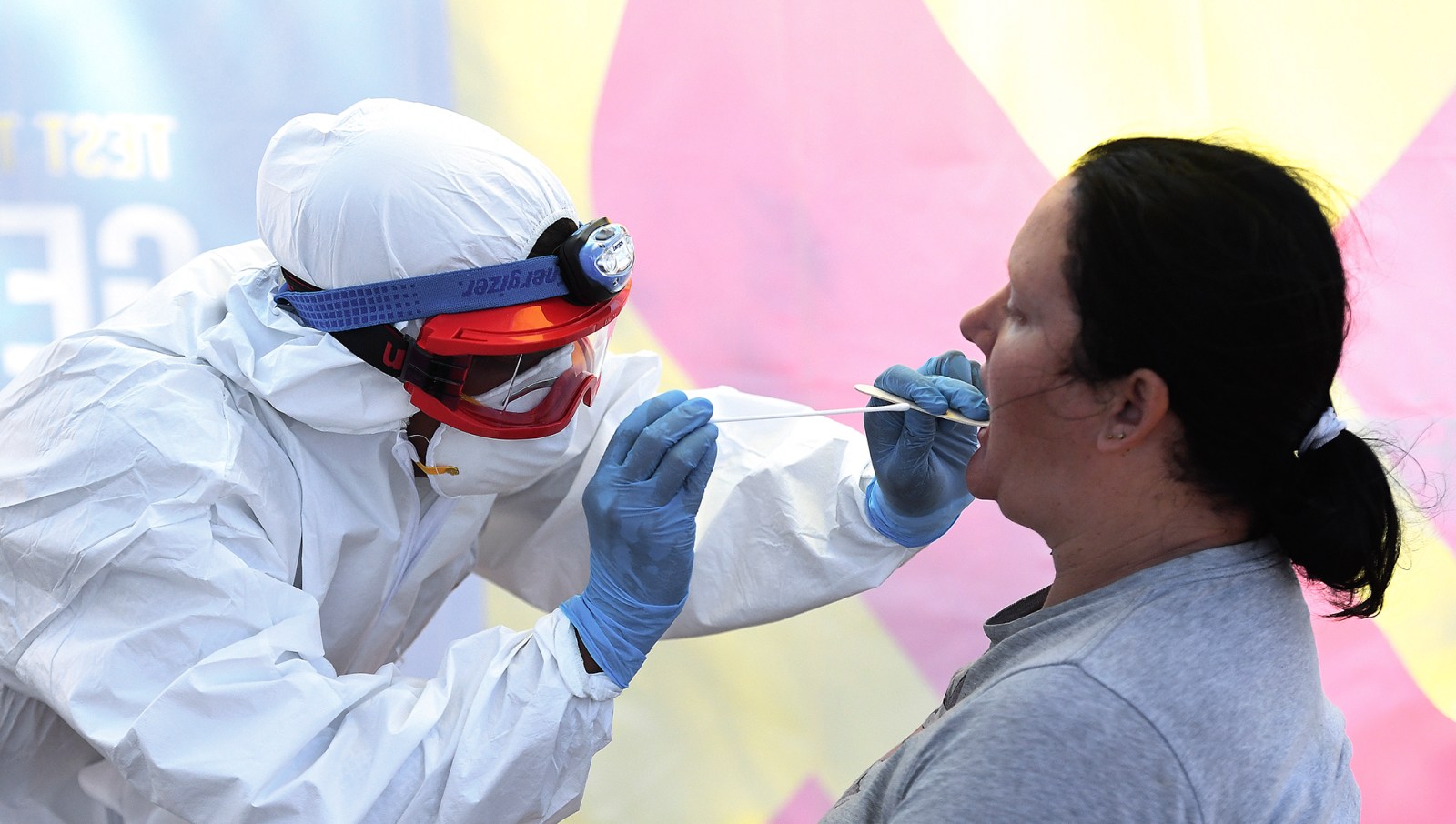 The National Health Laboratory Service is not doing as many tests it claims it’s capable of doing because of limited demand from provinces.

The National Health Laboratory Service (NHLS) currently has the kits and capacity to do 15,000 Covid-19 tests a day, according to NHLS Board Chair Professor Eric Buch. “The NHLS has also secured supplies to maintain the 15,000 testing capacity over the next three months, and further increase it if required,” he said in written replies to questions sent by Spotlight.

Buch explained that the number of tests the NHLS conducts is determined by provincial departments of health, which have to screen, trace and refer patients for samples to be taken either by the clinician or by the NHLS.

“The NHLS cannot generate demand, and in fact would welcome an increase in the number of patients who are referred for testing,” he said. “Our mobile laboratory strategy was put in place to increase the number of samples taken and tested.”

Expanded testing, contact tracing, and isolating people who are infectious is a critical dimension of South Africa’s strategy to limit the spread of Covid-19. How effectively people infected with the virus can be detected and isolated is also likely to impact government’s decisions regarding any possible extension of the current lockdown and the set of measures that might follow.

According to a Department of Health statement released on 8 April, a total of just under 64,000 Covid-19 tests have been done in the country so far.

Based on figures provided by the Minister of Health, we calculate that South Africa has been averaging fewer than 5,000 tests per day over the last few weeks. Earlier figures released by the minister indicated that fewer than 20% of tests are being done in the public sector. If this ratio is still accurate, it suggests that the NHLS is performing only around 1,000 tests per day.

When asked about the differences between private and public sector testing rates, NHLS CEO Dr Kamy Chetty said that “the private sector has done more tests as the case definition previously included international travel as a criteria for testing”.

How prepared is the NHLS really?

However, the Progressive Health Forum (PHF), a loose but influential advocacy group including many of the country’s top health professionals and endorsed by the South African Medical Association, raised questions about the NHLS’ preparedness.

“Despite having ample warning that the pandemic would inevitably reach our shores, the NHLS has only now started optimising its operations. Worse still, a failure in the timely procurement of appropriate testing kits has sparked a proliferation of private entities and interests peddling dubious testing kits,” the statement read.

The statement followed similar concerns expressed by Medical Research Council vaccinology Professor Shabir Madhi in a Sunday Times article. He told the Sunday Times that even though the health department is scaling up testing, mass testing is only likely to happen in May, which “is too late as the country will be dealing with the worst part of the pandemic”.

“The NHLS’ preparedness for Covid-19 has not been lacking, but in fact has been rapid and effective despite many challenges,” Chetty said in response to the PHF comments. “The NHLS has been gearing itself up since January 2020 when the National Institute for Communicable Diseases (NICD) informed them of the need. This was done through the rapid procurement of new equipment and test kits. When the instruction was issued by NICD, the NHLS was immediately able to start testing.” (See Chetty’s full set of answers to our questions.)

The PHF and their co-signatories also called on the health minister “to act decisively to end any board and management dysfunction at the NHLS”.

According to Buch, however, there is no Board and management dysfunction at the NHLS. “The Board has led a process over the past three years to deal with corruption and improve inefficiency and stabilise the finances has put us in a position where we are able to respond at the scale and cost we have done,”(sic) he said.

Chetty also denied that there is any management dysfunction at the NHLS. “The management team and staff have been outstanding in responding to this epidemic. They have been working tirelessly and with dedication to ensure that the NHLS is capacitated to contain the epidemic,” she said.

Buch was complimentary of Chetty and stressed her role in turning around the NHLS’ finances. “In January, the Board made it clear to the CEO that she must take responsibility for ensuring that the NHLS response was at the capacity and scale required to match the demands expected from SARS-CoV-2,” he said. “As the accounting officer and CEO of the NHLS, of which the NICD is an entity, the Board expects her to take charge of the campaign and drive it from her office. An effort of this nature needs a very directive management style. This has put us in the position whereby the NHLS has the capacity to meet the current and future demand for tests referred to it, having procured in a manner consistent with the Public Finance Management Act.”

Buch also said that “concerns raised by staff members about the management of the Covid-19 programme have been explored and guidance has been given to management” and “propositions raised by individual staff members that they could be more effectively utilised have been taken up with management”.  This confirms information that Spotlight has received indicating that unhappy staff at the NHLS have raised their concerns with the Board. (See Buch’s full set of answers to see these quotes in context.)

An important element of South Africa’s expanded testing capacity will be the use of GeneXpert machines (widely used in TB testing) to detect SARS-CoV-2 infection. According to Chetty, 325 GeneXpert machines  in 166 sites are available for use.

Chetty also said that, as previously reported, the NHLS “has proactively acquired 60 mobile labs to increase accessibility for those who are referred for sampling”. “These mobiles are being deployed where the need is the greatest, ensuring that people do not have to go to clinics and hospitals to be sampled,” she said.

Madhi was quoted in the Sunday Times suggesting that university laboratories be used to increase daily testing capacity. He reportedly said that “these labs could easily do 5,000 daily tests collectively”. When we asked Chetty why academic labs had not been roped in, she responded that “academic and other laboratories have been contacted to utilise capacity that they have”. “The NHLS will also fully utilise its own capacity and complement it with capacity from other laboratories.”

The NHLS yesterday shared a very useful document titled “COVID 19 implementation progress 080420” in which they set out their testing capacity and plans in more detail and provide information on what testing machines they have in which parts of the country. Our reading of this document is that academic labs will only be called upon if the NHLS can’t meet the demand for testing.

Spotlight asked Chetty about the potential use of serological, or antibody testing in South Africa. While the PCR tests currently in use look for the virus, serological tests look for antibodies. This makes serological tests less suited for detecting active infection since antibodies might still be present for some time after someone has recovered.

Chetty confirmed that “the NHLS only uses PCR tests for testing of Covid-19” and said that “the serology test is an antibody test which shows if a person has been infected. It is not utilised for assessing when the person is infectious”.

She also said that the rapid serological tests have to first be registered with the South African Health Products Regulatory Authority. DM/MC