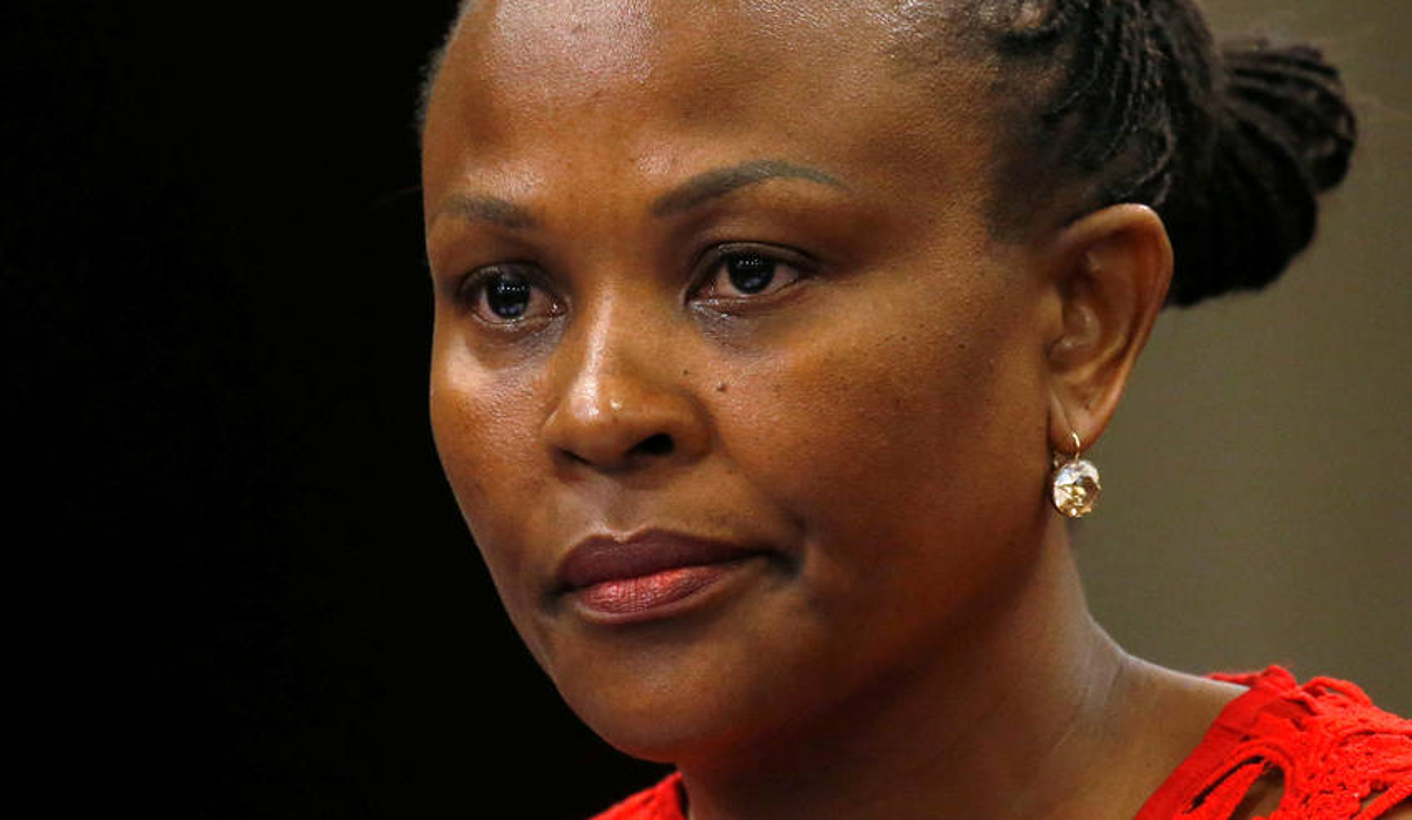 On Tuesday, the ANC and EFF MPs together voted down a DA proposal for an inquiry into Busisiwe Mkhwebane's fitness for office. The 6-3 vote in the justice committee on a report of one page and two lines ended a 17-month saga, part of the clearing of the decks over the next three weeks until 20 March when Parliament rises ahead of the 8 May elections.

At the heart of the debacle is Public Protector Busisiwe Mkhwebane’s controversial — and wholly invalidated by a court — June 2017 Bankorp report in which she ordered that Parliament effect a constitutional amendment on the South African Reserve Bank (SARB) mandate, and that ABSA repay a R1.2-billion lifeboat it had received for the apartheid-era transaction.

The court ruling’s scathing remarks about Mkhwebane led DA Chief Whip John Steenhuisen to request in September 2017 that the national legislature begin proceedings to remove her from office. All aspects of that Bankorp report have been set aside by the court, but there is one outstanding matter: Mkhwebane’s appeal against the personal cost order — an indication of the dim view judges take of a particular party in their courts. Although it was heard in the Constitutional Court in late November 2018, judgment was reserved.

And on Tuesday, because judgment had not yet been delivered on Mkhwebane’s appeal against the personal cost order, Parliament’s justice committee said it would be “premature” to institute removal proceedings.

“The committee recommends that the House does not support the request to expedite proceedings to remove the Public Protector, Adv. B. Mkhwebane from Office”.

On Tuesday DA MP Glynnis Breytenbach said the draft report staving off an inquiry into Mkhwebane’s fitness for office was “a disgrace”. African Christian Democratic Party (ACDP) MP Steve Swart argued that the report failed to deal with the matters, including the public protector’s “response that was quite scathing of us as the committee”.

But EFF MP Thilivhali Elphus Mulaudzi came out in full support of Mkhwebane:

“The public protector must be supported and she must stay in office and she must be given the maximum support by the Department of Justice.”

The ANC MPs focused on the report as representing all discussions and matters:

“The report is in order,” was how ANC MP Gijimani Skosana put it.

It came down to a vote — 6-3 in favour of not starting proceedings against Mkhwebane — and, that done, the report now is headed to the House for formal adoption. The DA will try to table a minority report, said Breytenbach, while Steenhuisen described the committee’s majority decision as a “whitewash”.

The whole matter had been caught up in politicking from the start, 17 months ago. That is, politicking among political parties, but also within the governing ANC, caught up in its factional battles leading up to its December 2017 national conference at Nasrec.

In October 2017 the justice committee heard Mkhwebane standing by her controversial report — the EFF then told her she had “bungled” the report and should resign — before ANC MPs appeared at odds with themselves in a series of meetings that first agreed to an inquiry on 10 October 2017, but then reversed that decision two weeks later.

When Speaker Baleka Mbete returned the matter to the committee in February 2018, following Steenhuisen’s second letter calling for its expedition, the politicking continued to unfold. In June 2018 then committee chairperson Mathole Motshekga decided that any decision on an inquiry could not proceed in the absence of Mkhwebane, who had excused herself over an “unforeseen family emergency”.

On Tuesday it seemed that politicking carried the day, rather than an oversight in terms of Section 194 of the Constitution that allows the National Assembly to remove the head of a Chapter Nine institution on the grounds of misconduct, incapacity or incompetence.

And there was a twist. A statement released on Tuesday by Mkhwebane said the public protector would on Thursday “name and shame” those who are not doing what she says they must.

“Regrettably, Adv Mkhwebane continues to contend with dozens of cases where she has taken appropriate remedial action as empowered by the Constitution and yet the implicated organs of state… neither implement her directives nor take her on judicial review and seek a court order suspending implementation,” said the statement.

“With more than 50 such cases, the problem has reached unacceptable levels. It is for this reason that Adv Mkhwebane is calling a media briefing, where she will name and shame the culprits.”

In Parliament, as the justice committee on Tuesday backed Mkhwebane to remain in office, the police committee seemed further down the road in supporting Police Minister Bheki Cele’s decision not to keep Robert McBride as head of the police watchdog, the Independent Police Investigative Directorate (Ipid), when his contract expires on Thursday. A decision is expected in committee on Wednesday, to come to the House as soon as possible thereafter.

It is one of the many pressing matters in Parliament’s in-tray in the dying days of its five-year term. On 20 March the national legislature rises for the 8 May elections.

There are reasons for this high-pressure situation. In 2018 Parliament added about three months’ extra constituency periods, officially for MPs to be in their assigned constituencies, but really to hit the electioneering campaign trail. In 2017 much of the attention of, particularly, the governing ANC MPs were focused on the factional jockeying and positioning in a hard-fought run-up to the Nasrec ANC national conference.

And so there is a host of outstanding matters — from adopting committee oversight reports to various areas of South Africa and study tours abroad, to bills and other matters, such as agreeing to international treaties, which cannot become effective until Parliament approves them, in terms of the Constitution.

Amid the regular dollop of electioneering from the House Speaker’s podium regardless of the matter at hand, it’s also been time for some bizarre developments, such as DA leader Mmusi Maimane not being on the Speaker’s list for the topic under discussion in his name: “Solutions to address job losses in South Africa and the gross domestic product (GDP) growth forecast decline for 2019”.

The National Assembly has stepped up the rate at which it is passing draft laws: Three on Tuesday afternoon, including the Public Investment Corporation Amendment Bill to, among other changes, allow greater worker board representation and increased transparency in its reporting on investments.

But it’s unclear whether the National Council of Provinces, which rises on 28 March, will be able to approve any of these bills as it must before legislation can be sent to the president for signature into effect. These bills, and other work, lapse and must be revived by the incoming Parliament.

Curiously, the Expropriation Bill, the key to give effect in law to the push to a constitutional amendment to make expropriation without compensation expressly possible, has not yet surfaced in Parliament. Given the public consultations in both Houses, it’s clear it will have to be the post-elections Parliament that will deal with that legislation.

The time pressure may affect Parliament’s finalising of key statutory and constitutional appointments. While the arts and culture committee finalised a list of 15 names for nomination to the Pan South African Language Board, the House on Tuesday agreed to extend the deadline for filling the vacancies among Commission for Gender Equality commissioners to mid-March.

Parliament’s communications committee was set to whittle down more than 320 applications for eight SABC board vacancies to 24; on Tuesday it decided to delay this.

“Given the history of challenges at the SABC board, the committee decided to conduct exit interviews with those who resigned from the current board,” said committee chairperson Professor Hlengiwe Mkhize.

These exit interviews are scheduled for 5 March. It was not immediately clear whether the shortlisting, interviewing and finalisation of nominations would proceed thereafter.

From the podium in the House to various committees, there’s much talk of legacy reports and the work to be picked up by the sixth Parliament, after the 2019 poll. DM