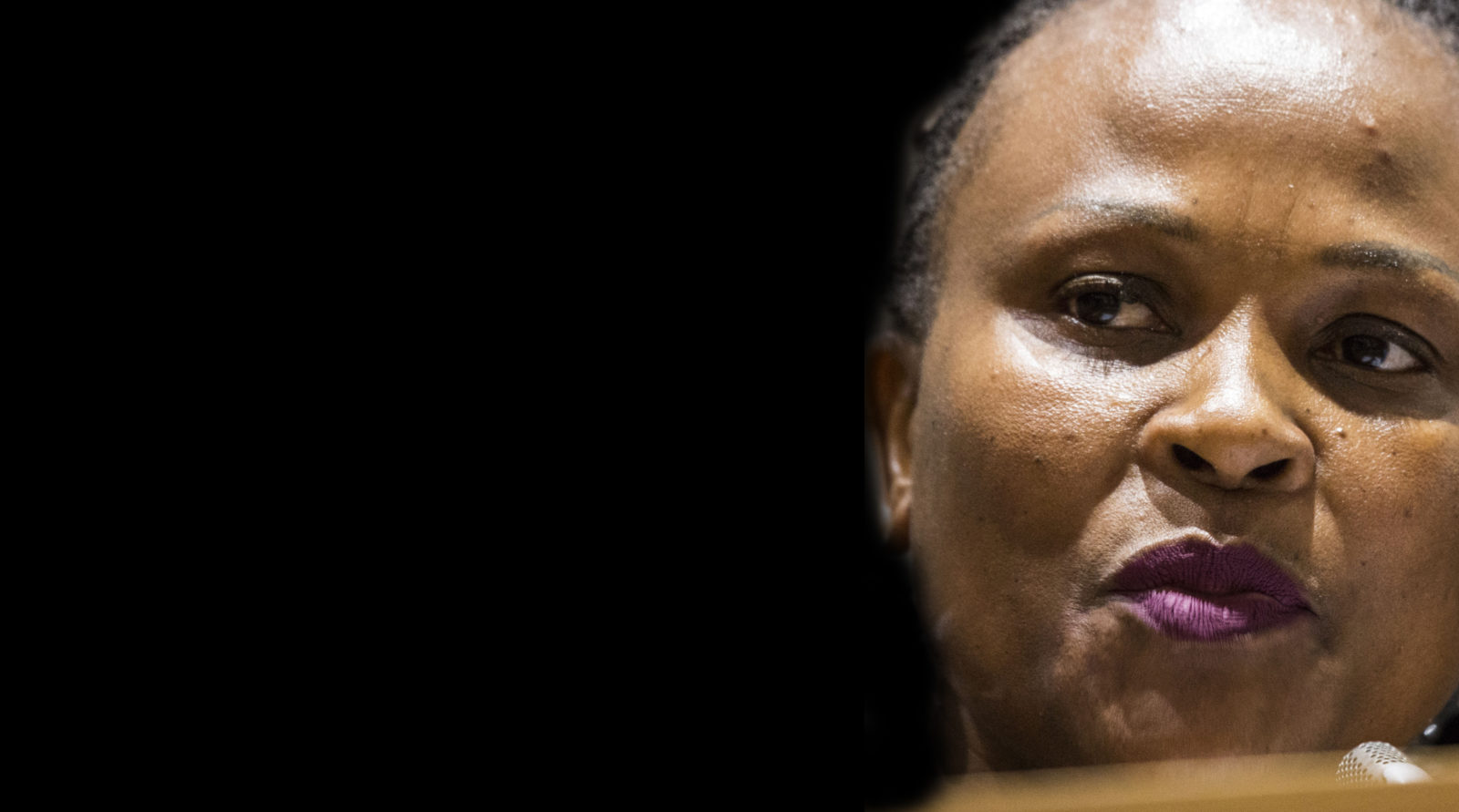 In 28 months, Public Protector Busisiwe Mkhwebane has managed to thoroughly damage the institution of her office and its capabilities. (Photo: Leila Dougan)

Public Protector Busisiwe Mkhwebane is manoeuvring through controversies like a cat with nine lives – and in her absence due to an “unforeseen family emergency” MPs on Wednesday, again, kicked for touch a decision on an inquiry into her removal from office.

There is nothing in the parliamentary rules or practice, the Public Protector Act or the Constitution that stops MPs from deciding whether to institute an inquiry, but justice committee chairperson Mathole Motshekga said the committee was “not competent” to make a decision in her absence. And that view prevailed. Finish and klaar.

The issue of a parliamentary inquiry into Public Protector Busisiwe Mkhwebane’s fitness for office has been up and down the parliamentary bureaucracy since September 2017.

It landed in the national legislature a month after the first damning judgment against Mkhwebane over her report into the apartheid-era ABSA bailout of Bankorp in court action by the South African Reserve Bank (SARB) that argued she overstepped her mandate.

The report not only had found that ABSA should repay R1,125-billion received as an “illegal gift”, but also instructed Parliament’s justice committee to amend Section 224 of the Constitution to broaden the Reserve Bank’s mandate from its “primary objective to protect the rand in the interest of balanced and sustainable economic growth” to “promoting balanced and sustainable economic growth and ensuring that the socio-economic well-being of the citizens are protected”.

It came slap bang in the middle of the ANC factional policy proxy battles with a push by the radical economic transformation lobby for the SARB’s nationalisation that had triggered an often-heated public debate in the run-up to the governing party’s December 2017 national conference.

While the public protector decided not to oppose the SARB court action – court papers recognised she had no powers to instruct Parliament to change the Constitution – the North Gauteng High Court in August 2017 delivered a scathing judgment, among others highlighting the public protector’s “somewhat unrepentant alignment with one side of the public debate”, how the scope of the initial probe was unilaterally changed, and the SARB’s submission was not reflected in the final report.

“A dismissive and procedurally unfair approach by the public protector to important matters placed before her by prominent role players in the affairs of state will tarnish her reputation and damage the legitimacy of her office,” said the judgment.

Following DA Chief Whip John Steenhuisen’s 13 September 2017 request for an inquiry into Mkhwebane’s removal from office to National Assembly Speaker Baleka Mbete, the matter was referred to the justice committee.

It was dealt with there in October. On 5 October Mkhwebane defended her report in the justice committee on the back of some ANC MPs’ sympathetic stance as the ANC factional machinations were still playing themselves out ahead of the governing party’s December 2017 national conference.

On 10 October, it was settled through a vote in the justice committee: there would be an inquiry, and the Speaker would be informed accordingly. Two weeks later, that decision was overturned in a heated committee meeting; the committee first had to decide whether there was actually a need for any inquiry.

Meanwhile, the court review of the controversial Bankorp public protector report brought by ABSA, and also SARB – it emerged that Mkhwebane did not disclose that she also had met the country’s spy agency, the State Security Agency (SSA) and the Presidency – proceeded amid controversy as the public protector changed legal council and twice asked for postponements.

The first calls for Mkhwebane’s resignation came from civil society, while her office became a revolving door for senior managers. There were several departures, including that of chief executive officer Themba Dlamini, for personal reasons, in November 2017. Deputy Public Protector Kevin Malunga, who previously had represented his former boss Thuli Madonsela at various official engagements, was shifted to training.

The public protector responded in a series of media statements seeking to deflect criticism.

On 16 February 2018 a full Bench of the North Gauteng High Court delivered a scathing judgment that declared the Bankorp report invalid.

“The public protector did not conduct herself in a manner which should be expected from a person occupying the Office of the Public Protector… She did not have regard thereto that her office requires her to be objective, honest and to deal with matters according to the law and that a higher standard is expected of her…”

On the same day Steenhuisen wrote another letter to Speaker Baleka Mbete, again requesting expedited procedures for Mkhwebane’s removal from office. And so that matter came back to the justice committee on Wednesday.

Officially the agenda of the day included a briefing on the Office of the Public Protector policies of appointing a special adviser and “discussions on the request to institute an inquiry on the fitness of the public protector to hold office”, according to the official alert.

But after MPs took their seats in the Old Assembly Chamber at the appointed hour, the green leather benches opposite where those briefing committees usually sit remained empty. Mkhwebane was a no-show. Neither did anyone else from her office show up. Co-incidentally, Malunga tweeted that he heard about the justice committee meeting only through the media:

“No one told me about it formally.”

The reason for Mkhwebane’s absence? An “unforeseen family emergency”, which justice committee chairperson Mathole Motshekga said he was informed about at 17:00 on Tuesday. Amid “profuse” apologies, Mkhwebane proposed dates later in June and in early July, slap bang in the middle of a two-month recess. How convenient.

The public protector in a subsequent public statement reiterated this.

“Due to the unforeseen family emergency she was forced to make a late cancellation of her intended attendance and rendered an apology to the committee… She was of the view that the agenda items required her personal attendance. Reluctant to send a delegation of officials without executive authority (herself), Adv. Mkhwebane opted to humbly request to the committee to defer the meeting to a later date.”

But MPs from across the political party divide had taken a dim view of the no-show that was seen as a snub in the absence of any briefing documents on the policy matter and on the argument that someone else, such as Mkhwebane’s deputy, should have attended. And the public protector had to explain in person her failure to honour her date with MPs. That’s about where the agreement ended.

“This committee is not competent to take this matter (of an inquiry) further without talking to the person concerned,” said Motshekga, adding that the public protector would be “invited” to appear before the committee again next week, not her proposed dates of later in June or early July.

“It would not be proper to discuss the matter in the absence of the public protector. We urge the public protector should appear as early as next week,” said the party’s Moloko Maila, adding in reference to an inquiry: “We are not at that stage to make that determination.”

DA MP Werner Horn argued, unsuccessfully, that if Mkhwebane was given the opportunity to participate in a committee meeting deciding on an inquiry, so should the complainant.

Some two hours were spent covering the same ground: the Speaker did not order an inquiry, but the committee decided whether one was needed, and that could only happen in the presence of Mkhwebane in keeping with, as Motshekga said, the audi alteram partem – or “hear the other side” – rule.

There was some confusion leading to African Christian Democratic Party (ACDP) MP Steve Swart asking whether Mkhwebane had been briefed on what was expected of her and whether she had been sent the DA’s letter requesting the inquiry into her fitness to hold office. No, Motshekga said, there was no reason for that; committee members had enough information to ask her questions relevant for a decision on whether there should be an inquiry. In any case, it was not about the DA request, but about the Speaker’s referral, the Bankorp judgment and the lawyer’s letter.

That’s a reference to the letter lawyers for ABSA wrote to the committee in mid-March about her comments during an earlier committee meeting with regard to the legal heave-to over her Bankorp report. At the time the public protector was appealing the court ruling against the report, but this was denied at the end of March.

However, on 9 May 2018 Mkhwebane addressed a letter to Motshekga, seen by Daily Maverick, to dismiss as “unfounded” the lawyers’ claims of unfairness, lack of good faith and full disclosure.

“All the above matters are sub judice, and I am therefore constrained from discussing them in detail herein, as they are under judicial consideration.”

The Public Protector Act allows for the removal of an incumbent by the National Assembly. Section 194 of the Constitution permits a public protector’s removal from office on the grounds of “misconduct, incapacity or incompetence”, after a finding by a committee of the National Assembly, which must adopt a resolution to that effect. That decision then goes to the president for implementation. Parliament’s Rule 167 allows a committee to summon any person to appear before it, hear testimony from anyone, receive any documents and determine its own working arrangements.

Wednesday’s justice committee’s insistence on Mkhwebane’s presence at discussions on her removal from office is unique.

But with Parliament going on recess to mid-August amid a heavy workload, it might just be a case of wanting to use any means necessary to ensure it will be the post-2019 elections Parliament that will decide the prickly issue of the controversy-prone Mkhwebane. DM