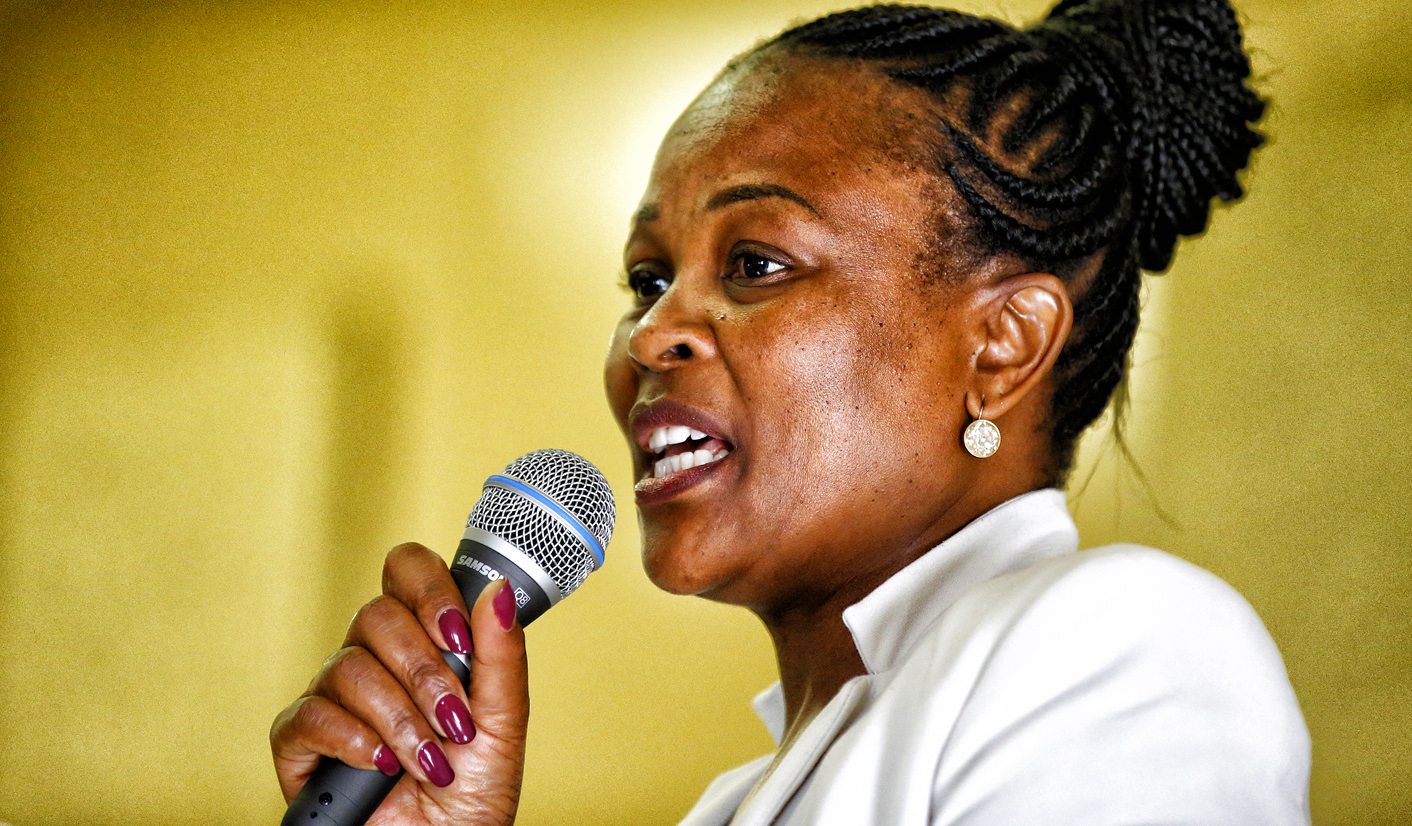 Parliament’s justice committee on Tuesday decided to squeeze into a chock-a-block programme a DA request for removal proceedings against the public protector after a rather public display of ANC factionalism. Committee chairman Mathole Motshekga threw a curve ball to party colleagues by proposing an ad hoc committee, similar to the one that appointed the public protector, but was overruled after a quick ANC caucus. Elsewhere in the parliamentary precinct, the communications committee was presented with the SABC annual report and adverse audit finding in the absence of a board whose job in law it to account to MPs. By MARIANNE MERTEN.

There was little Communications Minister Ayanda Dlodlo could say about the SABC’s dire financial troubles, including R4.4-billion in irregular expenditure and failure to maintain minimum cash reserves, as her departmental staff talked broadly through a PowerPoint presentation.

MPs had decided to give the minister a chance, rather than giving her her marching orders, in the absence of a permanent board of the public broadcaster. And while the minister may be the political boss, DA MP Phumzile van Damme, without disagreement from the ANC MPs, set out the legal quandary with regards to performance, annual reports and spending: “ The entity that accounts to us is the SABC board. Here we sit without a properly constituted board.”

President Jacob Zuma has yet to appoint the 12 board members Parliament settled on after an intense interviewing process in which the MPs kept a firm eye on the running clock to find the best possible candidates independently. The interim board’s term of office ended, in keeping with the law, at the end of September.

After a “thanks” to the five-strong interim board, there’s been little movement amid Presidency insistence on due diligence with regards to the prospective board members’ qualifications and security vetting.

“The Broadcasting Act enjoins the president as the appointing authority to ensure that persons recommended for appointment as members of the SABC board should meet certain requirements including citizenship and to have no criminal records. In addition, the presidency wants to ensure that the candidates indeed possess the qualifications stated in their CVs among other routine pre-appointment checks,” the Presidency said in a statement on Sunday.

But those checks were already conducted as part of the interviewing process, which saw at least two nominees eliminated due to default judgments highlighted by the State Security Agency’s (SSA’s) initial vetting. Under the Broadcasting Act, the President’s role is limited to choosing the chairperson and deputy chair.

Concern, or as the Presidency put it, “rumour” and “gossip”, is that Zuma is unhappy with the board members, and looking for more pliant ones. In the troubled governance history of the SABC, it was not uncommon that preferred names were often given the nod without due diligence. That backfired when MPs in late 2014 asserted their oversight role and instituted an inquiry against Zandile Tshabalala for misrepresenting her qualifications to them during the interview process. During the inquiry it emerged her qualifications were never actually submitted to MPs, who instead received an affidavit saying these were lost in a burglary. In December 2014 Tshabalala resigned after the communications committee recommended her dismissal to Zuma.

Since then the national legislature has upped its game and qualification checks and preliminary SSA security vetting have become standard in any interviewing process, be it for the SABC board, the public protector or other such positions.

Parliament in early September approved all five interim board members – within six months they had moved to cancel several controversial contracts that were hemorrhaging money, such as the New Age business breakfasts, and dismissed Hlaudi Motsoeneng – and one of the three of the previous board members who were removed under controversial circumstance by former communications minister Faith Muthambi after having raised governance concerns.

The almost two-week governance hiatus at the SABC has raised concerns that the moves towards cleaning house and stabilising the public broadcaster are pawns in broader political machinations.

Worries were also expressed publicly by trade union Broadcasting, Electronic Media and Allied Workers’ Union (Bemawu) in an open letter, and by the SABC8, the journalists who were expelled but reinstatement after raising their concerns.

“We believe that a recapture project of the public broadcaster is afoot,” said the SABC8 open letter in support of Bemawu. “We will not allow our short-lived, recently gained freedom of expression to be rolled back…” said the SABC8, calling on Parliament to hold the executive to account and ensure the new permanent board is appointed. “We wish to inform the executive arm of the state that we do not belong to them but to the people of South Africa via their public representatives – the Parliament of the Republic of South Africa,” their open letter said.

And on Tuesday the communications committee decided it should hear from the SABC8 and Bemawu, as Dlodlo interjected that if that was the MPs’ decision, they had to also hear from others who wrote to them.

The minister appeared on the back foot over the delays on appointing the SABC board, and her role in it. “If I am requested to assist, and I see nothing untoward (in this), that is exactly what I will do,” she told MPs. And on the issue of stalled appointments of executives – the SABC is currently run by acting CEO, chief financial and chief operations officers – Dlodlo said the interim board had not, as required, submitted the job specs to her for approval ahead of time. And the pool of six names for her selection did not meet the necessary television, radio and managerial standards.

Standards also came under scrutiny in the justice committee, this time Public Protector Busisiwe Mkhwebane’s ability to do her job without fear or favour. The DA last month requested the start of removal proceedings, largely over Mkhwebane meeting the SSA and Presidency, and failing to disclose this, in her controversial report into the ABSA Bankorp apartheid-era bailout.

Committee chairperson ANC MP Mathole Motshekga tabled a proposal that as the committee had little time in a pressurised programme, Speaker Baleka Mbete should be asked to initiate the process of establishing an ad hoc committee. The public protector was appointed by an ad hoc committee and thus an ad hoc committee should decide on a possible removal which, according to the Constitution in Section 191, requires that a majority in the House approves “a finding by a committee” on the grounds of misconduct, incapacity or incompetence. This had the support of opposition parties.

But the ANC balked. First there was a call for more time – “I don’t think it’s fair you put this before the committee (and say) ‘decide’,” said ANC MP Loyiso Mpumlwana, echoing party colleague Chana Pilane-Majake – and then a lunch-time caucus.

Public displays of governing party disagreement are rare. Usually ANC MPs set down their approach and strategy in study group meetings, often attended also by the relevant minister. But the factional winds are not only blowing in the executive as could be argued in the case of the SABC board, but also in the parliamentary caucus.

After the lunch-time caucus, it was decided by a vote: the justice committee would deal with the DA request for Mkhwebane’s removal even if the committee must sit on Fridays and at weekends.

On while this may be seen as a display of oversight, the political machinations are never far from the surface. Unlike the stinging barbs thrown at ex-public protector Thuli Madonsela, the ANC last week came out in support of Mkhwebane.

And what better way to play kick for touch on this – as have the transport, home affairs and mineral resources committees since they were directed in late June to probe State Capture claims, citing a heavy programme and pressure to co-ordinate diaries with the relevant ministers. “It’s on the agenda, but time is tight” sounds reasonable as boxes are ticked.

Of course, a specifically established ad hoc committee would have been in a better position to consider the public protector’s possible removal a year into the constitutional seven-year non-renewable term of office. DM