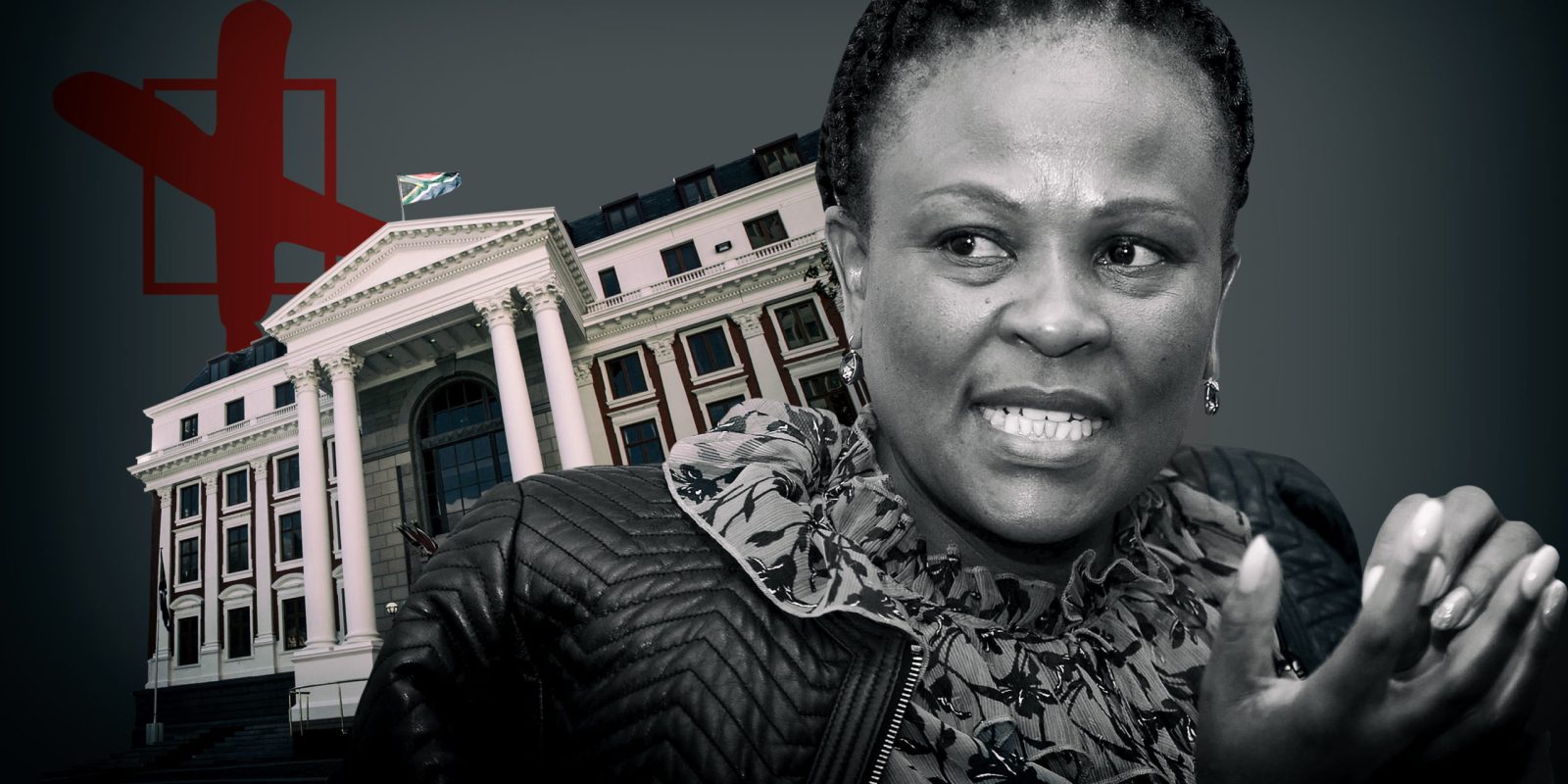 The parliamentary impeachment inquiry against suspended Public Protector Busisiwe Mkhwebane, including public hearings scheduled from next week, now unfolds without the cloud of legal proceedings because these have been withdrawn by the acting incumbent.

In a twist that effectively draws the line under R67-million already spent by suspended Public Protector Busisiwe Mkhwebane on a swathe of legal challenges to fight the impeachment proceedings and suspension, acting Public Protector Kholeka Gcaleka has put an end to legal proceedings in the name of the Chapter 9 institution.

The acting Public Protector – in a letter dated 6 July to the Western Cape High Court, Parliament’s presiding officers and others – gives notice of withdrawing the further legal action and appeal that was initiated by Mkhwebane when on 10 June she – again – failed in her bid to interdict both Parliament’s S194 impeachment inquiry and President Cyril Ramaphosa’s suspension.

“… Seanego Attorneys Inc (Mkhwebane’s lawyers) were not authorised, instructed or briefed by me as the acting Public Protector or the Chief Executive Officer of the Public Protector, as the accounting officer to deliver the aforementioned application for leave to appeal,” writes Gcaleka in the letter that was leaked publicly, adding that the Western Cape High Court would be formally approached.

In other words, only if Parliament, the President or the DA insist on seeking costs against the Office of the Public Protector would any legal action continue on the costs.

Parliament spokesperson Moloto Mothapo has confirmed receipt of Gcaleka’s notification. “Parliament has taken note of the acting Public Protector’s intentions on the matter and will await any further directions from the court,” he said in a statement on Thursday morning.

It may just be that everyone drops legal action, in a move to end what has been about two years of often acrimonious litigations in which Mkhwebane resorted to claims that she was being victimised by powerful forces, as her court papers put it in the last, also unsuccessful, court bid.

Throughout, Parliament’s S194 impeachment inquiry rules and proceedings – a 17-step process – have been found proper and lawful, with one tweak: the Constitutional Court ruled in February that the heads of Chapter 9 institutions who appear before such a S194 parliamentary committee have the right to full legal representation, not just legal advice.

What remains outstanding is Mkhwebane’s turn to the Constitutional Court to ask it to rescind its decision to dismiss her earlier rescission application. It’s an unprecedented move to the highest court of South Africa, and has been viewed in some legal and political circles as undermining the judiciary.

Ramaphosa suspended Mkhwebane on 9 June. “Advocate Mkhwebane will remain suspended until the section 194 process in the National Assembly has been completed. President Ramaphosa has fulfilled his obligation to provide Advocate Mkhwebane a fair hearing by according her sufficient time and opportunity to make submissions,” a Presidency statement said at the time.

Meanwhile, the National Assembly – which already established the S194 inquiry committee in March 2021, but held off proceedings pending litigation – is ready to proceed.

Earlier in 2022, two evidence leaders were appointed, and Mkhwebane met the 22 May deadline to submit her version on the counts of incompetence and misconduct that underlie the inquiry into her fitness for office – and potential removal before her non-renewable seven-year term ends in October 2023.

“The work of the committee is on track and continues as planned from 11 July 2022,” S194 committee chairperson Qubudile Dyantyi confirmed in a text message on Thursday morning.

On that day, the first public hearings will start with testimony from those who answered a public call to make statements under oath, as well as witnesses.

Exactly who may be among those participating in next week’s public hearings is expected to emerge in an official S194 committee notice that might be issued later on Thursday.

The programme adopted by MPs in late May charts a way towards finalising the removal-from-office inquiry by the end of September 2022.

Unless Mkhwebane pulls another legal rabbit out of the hat or perhaps submits a sick certificate, the S194 committee has scheduled four days from 26 July to hear from her. DM