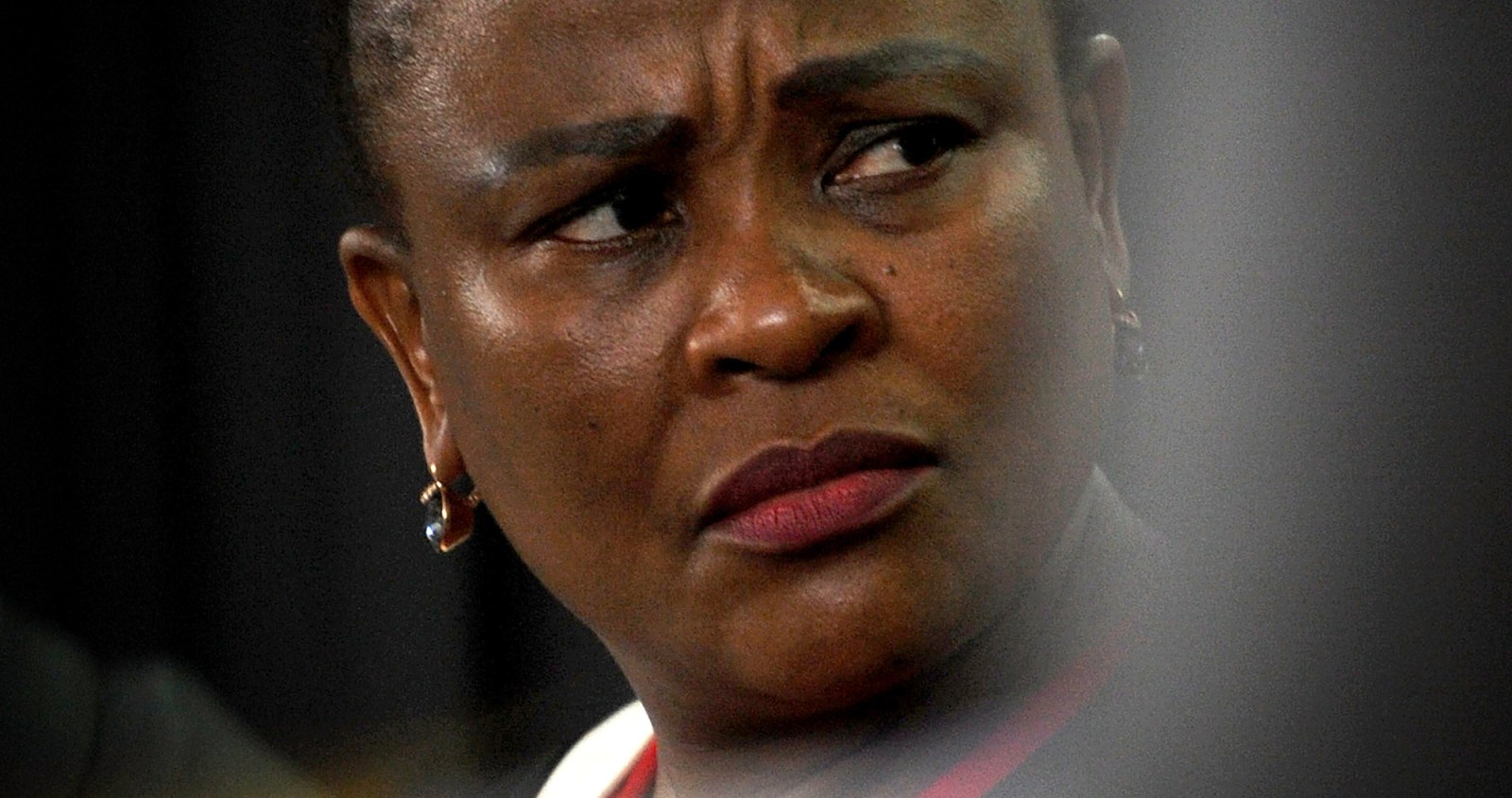 Parliament’s section 194 committee is proceeding with the impeachment inquiry of Public Protector Busisiwe Mkhwebane — regardless of her again turning to the Constitutional Court to rescind its dismissal of her earlier rescission bid.

‘I am trying to find the right word. It seeks to rescind the decision not to rescind the decision of the Constitutional Court… Apparently, the Chief Justice should not have allowed the [rescission] judgment to be issued while he is still investigating the issue of the SMS,” was how Parliament’s legal adviser, Sizwe Njikela, on Wednesday described to MPs the latest legal curveball from Public Protector Busisiwe Mkhwebane.

The Public Protector’s lawyers had written to Parliament, asking that the impeachment proceedings be delayed until the finalisation of her renewed rescission application to the Constitutional Court, against the dismissal of the earlier rescission application. According to her affidavit, a central issue is that the SMS leak that her application had been unsuccessful had “undermined justice”.

The Public Protector also asked Parliament to agree to a postponement of the interdict hearing that had already been adjourned to 18 May from 25 April in the Western Cape High Court because of that SMS — and the Office of the Chief Justice’s investigation into that.

Rescission applications used to be rare in South African jurisprudence. That is, until ex-president Jacob Zuma’s bid against his guilty verdict and 15-month jail sentence for contempt of the State Capture Commission — and now, the third such application from Mkhwebane, who lost her first rescission application, against the Constitutional Court upholding the invalidity ruling against her CR17 campaign funding report, in early March.

While Njikela may have been cautious around the repeat rescission bids by the Public Protector, his comments on Parliament’s constitutional powers and responsibilities were clear-cut.

“The work of Parliament cannot be trumped by what is before court. Otherwise, Parliament could be paralysed in all instances. All you have to do is file an application…

“There is no court that can decide the Public Protector is incompetent or has miscoducted [sic] herself. That is exclusively within the mandate of Parliament.”

Ultimately, in Parliament it is the MPs who decide what to do. And on Wednesday it was a yes to proceed.

“There is nothing stopping the committee from continuing,” said ANC Deputy Chief Whip Doris Dlakude, adding that no interdict or other restrictive measures were in place.

“I don’t want to dwell on the leakages — it’s very unfortunate that it happened like that. It’s not our baby.  Those who are responsible for dealing with that must deal with that.”

Such crisp statements from the ANC in Parliament signal a change in attitude towards the Public Protector. Perhaps it’s a case of running out of patience with the Public Protector’s multi-layered legal actions that have also involved President Cyril Ramaphosa over his stated intention to suspend Mkhwebane pending the impeachment inquiry, as section 194 of the Constitution allows.

A presidential decision was put on the backburner pending the finalisation of the interdict proceedings in the Western Cape High Court. With the section 194 inquiry now proceeding, it could not be immediately ascertained if the Presidency is reviewing its stance.

Wednesday’s statements from several ANC MPs showed the governing party has styled this section 194 impeachment inquiry as a “fact-finding mission”. Except it’s not a fact-finding mission, but a constitutional accountability process that could result in a finding that Mkhwebane is unfit for office because of incompetence and misconduct in line with section 194 of the Constitution.

Regardless of Mkhwebane’s letter asking for a postponement of these, removal from office proceedings steps have already unfolded.

Mkhwebane has until 18 May to indicate her legal representative so (s)he can be copied in on correspondence, and until 22 May to make written representations on the National Assembly motion on the impeachment, according to a section 194 committee letter dated 22 April.

“If the written response is not received by the committee by the due date, the committee will proceed with its hearings based on the evidence and information available to it, which includes the motion, accompanying evidence, your representation to the panel and the report of the panel together with any witness statements, if applicable,” according to the letter signed by committee chairperson Qubudile Dyantyi.

The reference to “panel” relates to one of the initial steps in the 17-step impeachment process that followed the DA’s complaint in February 2020. The three-strong independent panel chaired by retired Constitutional Court judge Bess Nkabinde submitted its report in late February 2021, finding grounds of misconduct and/or incompetence to pursue impeachment proceedings.

While Mkhwebane in October had failed to interdict the removal proceedings, in July 2021 she successfully challenged the rules in the Western Cape High Court. On 4 February, the Constitutional Court upheld the possible participation of a judge on the panel — this was crucial to the integrity of the parliamentary process to date — but agreed on full legal representation in impeachment proceedings, not just advice, as the rules had initially stated.

It was against this Constitutional Court judgment that Mkhwebane brought a rescission application, while also pursuing the interdict in the Western Cape High Court.

That’s when the SMS saga dropped.

It was sent unsolicited by self-professed legal analyst and consultant Ismail Abramjee to National Assembly Speaker Nosiviwe Mapisa-Nqakula’s advocate, Andrew Breitenbach SC, who disclosed this. The interdict proceedings were then postponed to 18 May.

The Office of the Chief Justice began a probe, but this had not been completed by 6 May when the Constitutional Court dismissed Mkhwebane’s rescission application against the February judgment upholding Parliament’s impeachment process.

When on 6 May the Constitutional Court dismissed Mkhwebane’s rescission application, the judges effectively wiped out any grounds for her interdict hearing in the Western Cape High Court.

But, on 10 May, Mkhwebane brought a fresh rescission application, centred on that SMS, having already opened a case against Abramjee at the Brooklyn, Pretoria, police station, and having started her own investigations into the SMS.

“The requirements of judicial impartiality were also seriously compromised when some of the justices who granted the impugned order are candidates for the questioning in the course of all three investigations into the leaking issue [Office of the Chief Justice, the police and Mkhwebane]. Such irregular conduct taints both the legitimacy and legality of the impugned order,” the Public Protector says in her rescission application affidavit dated 10 May.

And she argued a failure of justice, particularly as the Chief Justice did not take into account she was “not a mere ‘litigant’ but also the complainant and victim of the alleged criminal conduct. The Constitutional Court is also not just a ‘court’ but the organ which is, rightly or wrongly, being investigated…”

This seems to want to lay the seeds for myriad spin-off grounds that could be used in other legal steps against the parliamentary section 194 proceedings, or any other.

It remains to be seen how the Constitutional Court will deal with this new rescission application. Also unknown is how the SMS saga will be finalised.

But Wednesday’s section 194 committee was clear — the impeachment inquiry proceeding would continue. The revised programme now includes four days scheduled for “Hearings: Public Protector” from 26 July — with a final report, including Mkhwebane’s response, ready by the end of September for consideration by the House.

Should the committee ultimately decide for the removal of Mkhwebane from office for misconduct and/or incompetence, the National Assembly must approve that with a two-thirds majority, or 264 MPs.

“… [T]he decision to start an enquiry in the present atmosphere, which is littered with allegations of conflicts of interest, illegality and even alleged corruption and other criminal conduct, is totally unacceptable,” was Mkhwebane’s response in a subsequent statement on Wednesday.

Except that, to date, the Public Protector has failed to persuade the court of any of such claims, or earlier ones of bias, irreparable harm or prejudice. DM