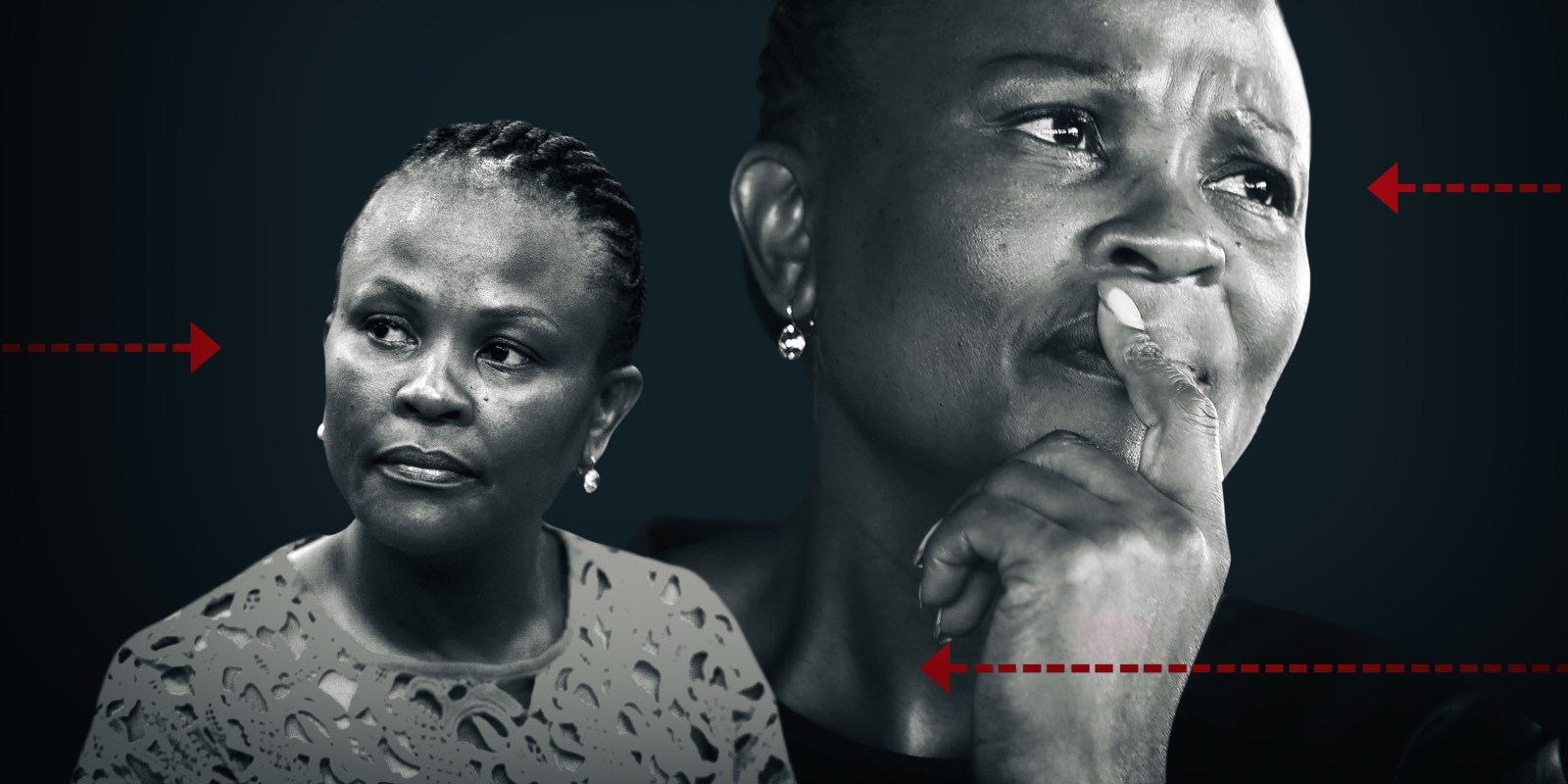 Most MPs of the Section 194 committee agreed that Public Protector Busisiwe Mkhwebane’s impeachment inquiry must start. But the EFF and African Transformation Movement said court processes should finish first. It’s a sign of the politics to come — and how litigation has become a political tool.

A plethora of litigation — in progress and threatened — swirls around Public Protector Busisiwe Mkhwebane and the Section 194 inquiry into her removal from office that goes back to February 2020. This includes the rescission application to the Constitutional Court that upheld the integrity of the parliamentary processes towards the impeachment inquiry, a challenge to the presidential prerogative to suspend her pending the impeachment process, and interdict proceedings now that the Section 194 inquiry committee is proceeding.

The clock is ticking — in mid-October 2023, Mkhwebane’s non-renewable seven-year term will be completed.

In 2020, Mkhwebane failed to interdict Parliament from proceeding after the Section 194 impeachment inquiry committee was established in April that year. The July 2021 Western Cape High Court judgment against the parliamentary impeachment rules halted that process — until the unanimous Constitutional Court judgment on 4 February upheld the integrity of the parliamentary process so far.

Tuesday’s Section 194 committee decided, as the chairperson, ANC MP Qubudile Dyantyi, wrapped it, “There is no legal impediment for us to proceed…”

The ANC agreed, as did DA MP Annelie Lotriet and Freedom Front Plus Chief Whip Corné Mulder, who added that a cost order should be considered against the Public Protector for using public monies to litigate.

Not the African Transformation Movement (ATM) or the EFF. Both cited the Public Protector’s 11 March rescission application to the 4 February Constitutional Court judgment upholding the integrity of the parliamentary impeachment process so far.

Zungula finds himself at the sharp point of politics over his motion of no confidence in President Cyril Ramaphosa scheduled for Wednesday. Having on Monday lost the court battle for a secret ballot, the party had asked for a postponement of the motion.

On Tuesday, National Assembly Speaker Nosiviwe Mapisa-Nqakula said only the programming committee could decide on a postponement. That committee, however, meets again only on Thursday morning, its traditional weekly time slot.

Effectively, this has left the ATM in a quandary of having to either agree to an open vote even as it is approaching the courts for a secret ballot, or to withdraw the no-confidence motion as the sponsor of that motion.

In an unprecedented move, the ATM has informed the Speaker it “will therefore not be participating in the motion on the 30th of March 2022, if the Speaker refuses to postpone the motion as requested” in correspondence seen by Daily Maverick.

The implications of that will unfold in the House on Wednesday, alongside the debate on the unprecedented DA motion of no confidence in the Cabinet.

Tuesday’s Section 194 inquiry noted the EFF and ATM objections. And it proceeded to officially appoint the evidence leaders, advocates Nazreen Bawa SC and Ncumisa Mayosi, given that nothing stood in the way of the committee starting out on its work that a programme sees completed on 21 September, including public hearings from 4 May and responses from Mkhwebane and her lawyers over three days from 31 May.

“We may get interdicted in the next couple of hours and days… As of now, there’s no interdict… If the application is filed, upon assessment, Parliament will have to decide whether to oppose or not,” parliamentary legal adviser Siviwe Njikela briefed MPs.

Parliament is opposing Mkhwebane’s rescission application to the Constitutional Court over the unanimous 4 February judgment that ruled a judge may be part of the independent panel assessing whether there were grounds for impeachment proceedings and ensured full legal representation, rather than the contemplated legal assistance, at such proceedings.

Late on Tuesday, it was unclear exactly when Mkhwebane would file an interdict application against the Section 194 inquiry proceeding that, according to the programme, would now allow her until 30 April to respond to the evidence before the inquiry.

“The Public Protector will have no option but to institute court proceedings to interdict both the committee proceedings and the contemplated suspension,” her spokesperson, Oupa Segalwe, replied in a text message to a request for comment.

“The Public Protector wrote to the President giving him the reason why he cannot suspend her, namely his conflict of interest. She reserves the right to supply other reasons to the correct suspending authority once that question is determined by a court of law.”

This would mean no steps towards a possible suspension until the court has made a decision. But it remained unclear when exactly Mkhwebane would file the court papers against any suspension.

Instead, it appears different processes — parliamentary and presidential — are confused by Mkhwebane’s lawyers, Seanego Attorneys, in a letter sent to Dyantyi and seen by Daily Maverick.

“As you may be aware, through their legal representatives, the Public Protector, the President and the Speaker have reached an in-principle agreement that the urgent application… [over possible suspension] be set down for hearing before a full court of three judges on 25 and/or 26 April…” say the Public Protector’s lawyers.

“Pending the outcome of the said application, the President has agreed to impose a moratorium on the proposed suspension process until the court decides whether or not he is the lawful suspending authority in the prevailing circumstances.”

Parliament spokesperson Moloto Mothapo told Daily Maverick the Speaker was not a party to any agreement claimed by Mkhwebane’s lawyers.

On 17 March, President Cyril Ramaphosa wrote to Mkhwebane asking for reasons why she should not be suspended, while the Public Protector asked that the letter be withdrawn given that the President was conflicted and could not suspend her.

The timeline is important. The presidential letter came eight days after the Constitutional Court dismissed Mkhwebane’s rescission application over the court’s July 2021 ruling setting aside as invalid her report on the funding of the CR17 campaign for president of the governing ANC.

While section 194(3)(a) states the President “may suspend a person from office at any time after the start of proceedings of a committee of the National Assembly for the removal of that person”, Mkhwebane in her reaction claimed that Ramaphosa remained conflicted.

When Mkhwebane refers to Ramaphosa being conflicted it’s a reference to her investigation into a complaint about a leaked audio clip that had also been brought to Parliament’s public spending watchdog, the Standing Committee on Public Accounts (Scopa), where ANC MPs nixed any further steps.

This was after Ramaphosa wrote to Scopa saying his comments to the ANC National Executive Committee that money “often from state resources and public resources” was used for campaigning were “based on allegations already in the public domain and rumours circulating within the organisation and broader society”.

On Tuesday, the Section 194 inquiry was clearly told any steps towards the Public Protector’s suspension were the President’s prerogative, and that Parliament opposed the rescission order because “we believe there is no merit in this matter”.

Or as the state lawyer acting for the Speaker told the Public Protector in correspondence seen by Daily Maverick, dated 22 March: “Your client is not entitled to seek to re-litigate, by means of a rescission application, the points she lost in the main proceedings.”

Dubbed “a festival of letters”, the various letters invoking litigation seem to have put the Section 194 inquiry committee on point to hold back from public discussions over what was called “strategy”.

And that signals potentially tricky litigation steeped in politics. DM