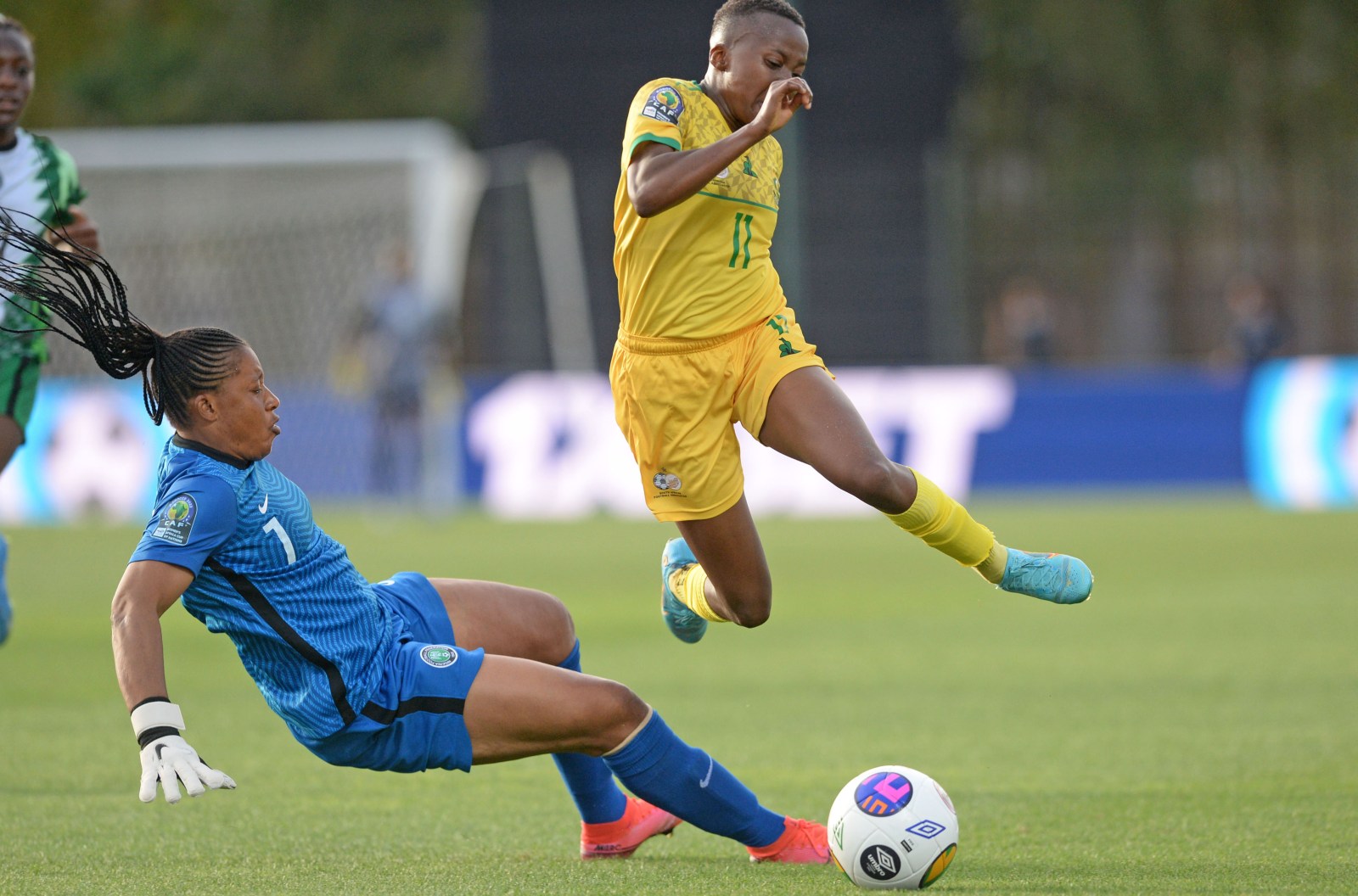 Banyana Banyana were quick out of the blocks in the best possible way at the 2022 Africa Women Cup of Nations – but there is still a distance to run.

As far as statements of intent are concerned, few could be more emphatic than South Africa’s victory over Nigeria in their opening group game of the 2022 Africa Women Cup of Nations (Awcon) in Morocco on Monday night.

Banyana Banyana were at their clinical best, netting twice in as many minutes to rock and shock the defending African champions with a 2-1 win.

Strikes from Jermaine Seoposenwe (three years after her last appearance for South Africa) and Sweden-based Hildah Magaia ensured the South Africans collected all points on offer.

Banyana Banyana made their intentions clear right from kick-off. Lightning-fast forwards Thembi Kgatlana and Seoposenwe, ably assisted by Magaia and the very impressive Noxolo Cesane, proved to be problematic for Nigeria’s tall and burly defenders.

Captain Refiloe Jane – who wears the red and black stripes of AC Milan in Italy at club level – was alive to the aforementioned quartet’s blistering pace and constantly looked for a pass behind the Nigerian defensive line for them to run onto.

The skilful Linda Motlhalo (player of the match) added her flavour as the South Africans laid down the gauntlet in Rabat.

Read in Daily Maverick: “Banyana Banyana out to exorcise ghosts of Awcons passed”

The Super Falcons finally breached a resolute South African defence in the 92nd minute, courtesy of a Rasheedat Ajibade strike. But it was too little too late as the Desiree Ellis-coached team held on to bag all three points.

“This is a very big win for us as a team. We needed this result because it sets the tone for the rest of the tournament. We had a meeting before we started training to talk about our goals and ambitions. We want to qualify for the World Cup and win the title here,” Ellis said after the match.

A change of guard?

Traditionally, Nigeria, who are also the record African champions with 11 titles, have been the dominant force in their meetings with Banyana Banyana.

In fact, as recently as 2016, their head-to-head record stood at nine wins for Nigeria and just one for South Africa. The latter’s maiden win came in 2012, during this very competition in Equatorial Guinea. It came after they arrested their losing streak against the African giants with two draws in consecutive friendly games which ended 1-1 and 2-2 in June 2012.

Following that year’s disappointment, the Nigerians got their revenge with back-to-back victories at the 2o14 and 2016 Awcon showpieces.

The sides met again in the group phase of the 2018 edition, where Kgatlana’s sole strike handed Banyana another rare victory over their rivals.

Though the Super Falcons vanquished Banyana in the 2018 edition’s final, because their victory came on penalties it counted as a draw in the official record books.

That means that, following the latest result, Nigeria are now winless in their past four clashes with Banyana, after the South Africans defeated the Super Falcons in Nigeria in 2021 to win the inaugural Aisha Buhari Cup friendly tournament.

“We know what happened in 2018,” said Ellis, referring to their defeat of the Falcons in the opening game before being denied their maiden African crown by the same side in the final.

“But we have matured over the past four years and there are changes in our team. Jermaine played about four positions today. That is the versatility we have now as a team.”

Time will tell just how much Banyana have matured. They sit atop Group C ahead of their next game against debutants Burundi, on Thursday, 7 July at 7pm. DM