Banyana will fight like soldiers to win Awcon, says sta... 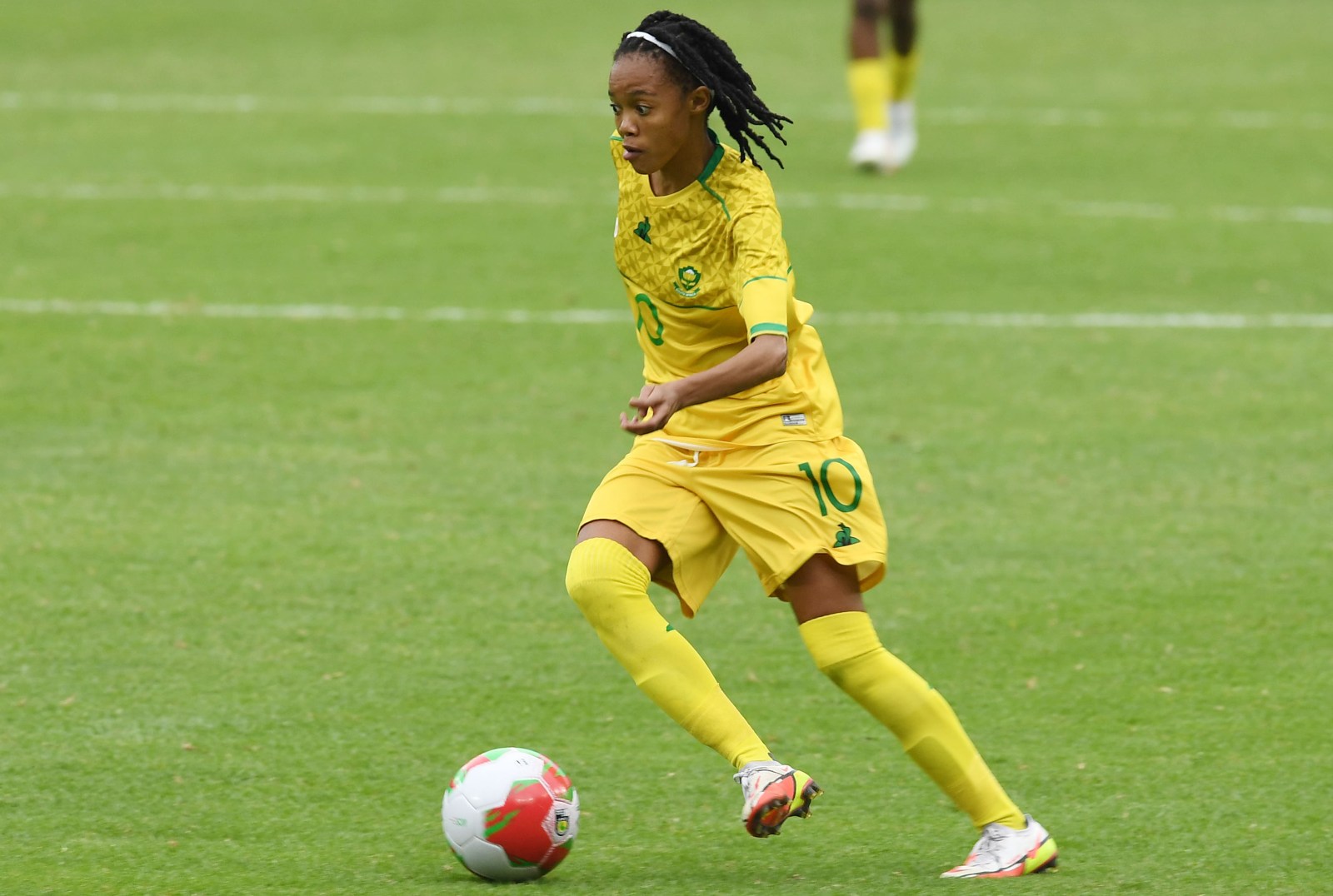 Linda Motlhalo of South Africa during the 2022 Africa Women Cup of Nations qualifier match between South Africa and Algeria at Orlando Stadium on February 18, 2022 in Johannesburg, South Africa. (Photo by Lefty Shivambu/Gallo Images)

Who will be the last team standing when the Africa Women’s Cup of Nations (Awcon) concludes on 23 July? Banyana Banyana defender Bambanani Mbane hopes it will be South Africa.

The Mamelodi Sundowns Ladies defender, who is the country’s reigning female Footballer of the Year, as voted for by the South African Football Journalists’ Association, is one of five players from her club in the Banyana squad in Morocco.

Juice, as Mbane is known to her teammates, feels the experience of the quintet from the reigning African club champions will play an important role in helping Banyana push for a maiden Awcon title.

“One thing I like about Sundowns is that everyone is hungry for success in the team. It’s the home of champions,” Mbane said prior to the team’s departure for Morocco.

“When you’re playing with such people, who have success at the forefront of their minds at all times, you’re motivated to be a better player. It injects you with that winning mentality.”

The 32-year-old no-nonsense defender was integral to Sundowns winning the inaugural CAF Women’s Champions League in 2021 – adding another feather to a brimming cap. Those feathers include appearances at the Olympics and the Fifa World Cup and silverware from a stint in Belarus.

But she wants more

“I’m the type of player who wants to win every competition I participate in. Winning motivates me. The more I win, the hungrier I am to win even more,” she said.

“So, heading into Awcon, I’ll be even more motivated; especially because I know what the whole team is aiming for, and the country as well. We are one of the teams that are trusted by the nation to win.”

The first Awcon of the Covid-19 era has been expanded from eight teams to 12.

This means pursuit of continental glory gives South Africa an extra hurdle to leap, a quarterfinal, compared to the last edition in 2018, when they were beaten by the Nigerians in the final.

Mbane is unperturbed: “That [extra match] means we’ll have some pressure on us. But we must be able to handle that pressure and not be distracted from the main goal – to win the tournament. We know it won’t be easy, but we are going to push.

“The coach sat us down, because there is a mix of experienced players and some younger players in the group. She told us that, as the senior players, we must guide the younger players. It’s our responsibility to show them what is expected at this level. Everyone must be ready mentally. But the team spirit is amazing. We will fight like soldiers to bring the trophy home.”

A newcomer is excited and nervous

The 18-year-old starlet from Richmond United, who play in the top-flight Hollywoodbets Super League, is bubbling with  both excitement and nerves.

“I am learning from the senior players as to how I should prepare myself,” said the young forward.

“I have to say the intensity is very high here, but I am getting there and I am pushing a lot. I am excited, but nervous because this is my first experience in the national team. I just want to win the tournament and make our country proud.”

PLAYERS TO WATCH AT AWCON 2022

One does not easily earn comparison to one of the greatest players. So, Linda Motlhalo’s nickname “the Randfontein Ronaldinho” is indicative of the influence she has on a team.

Though Bambanani Mbane’s defensive wiliness will be priceless and Thembi Kgatlana’s eye for goal crucial, Motlhalo’s vision and creativity from midfield will be a critical ingredient if Banyana are to concoct a winning recipe in Morocco.

The No 10, who plays for Swedish side Djurgardens, is one of the first names on the Banyana team sheet. On a good day, her precision passing and eye for goal have the potential to torture opposition defenders.

The Banyana defenders will need to be at their sharpest to foil Barcelona forward Asisat Oshoala.

The striker is undoubtedly one of the best African players currently active, and is considered one of the best the continent has produced – male or female. The 27-year-old  has been Africa’s Player of the Year on no fewer than four occasions (2019, 2014, 2016 and 2017).

In 2021/2022, as Barcelona raced to a perfect league campaign – winning all 30 games – Oshoala was the centrepiece.

The forward became the first African woman to win the top goalscorer gong in the Spanish Primera Division since it began in 2011, netting 20 times for the champions.

Her compatriots will be hoping she brings that sort of form to Morocco, where the Nigerians will be looking to add another crown to their record haul of 11.

The 22-year-old Zambian forward announced herself to the football world when she became the first footballer in Olympic history to score back-to-back hat-tricks at the Tokyo Olympics in Japan.

She was among the two Africans listed among The Guardian’s Top 100 Female Footballers of the Year 2021 following her exploits for Chinese Super League side Shanghai Shengli in her debut season. After that, she became the league’s top scorer, with 18 goals in 13 league matches. DM168