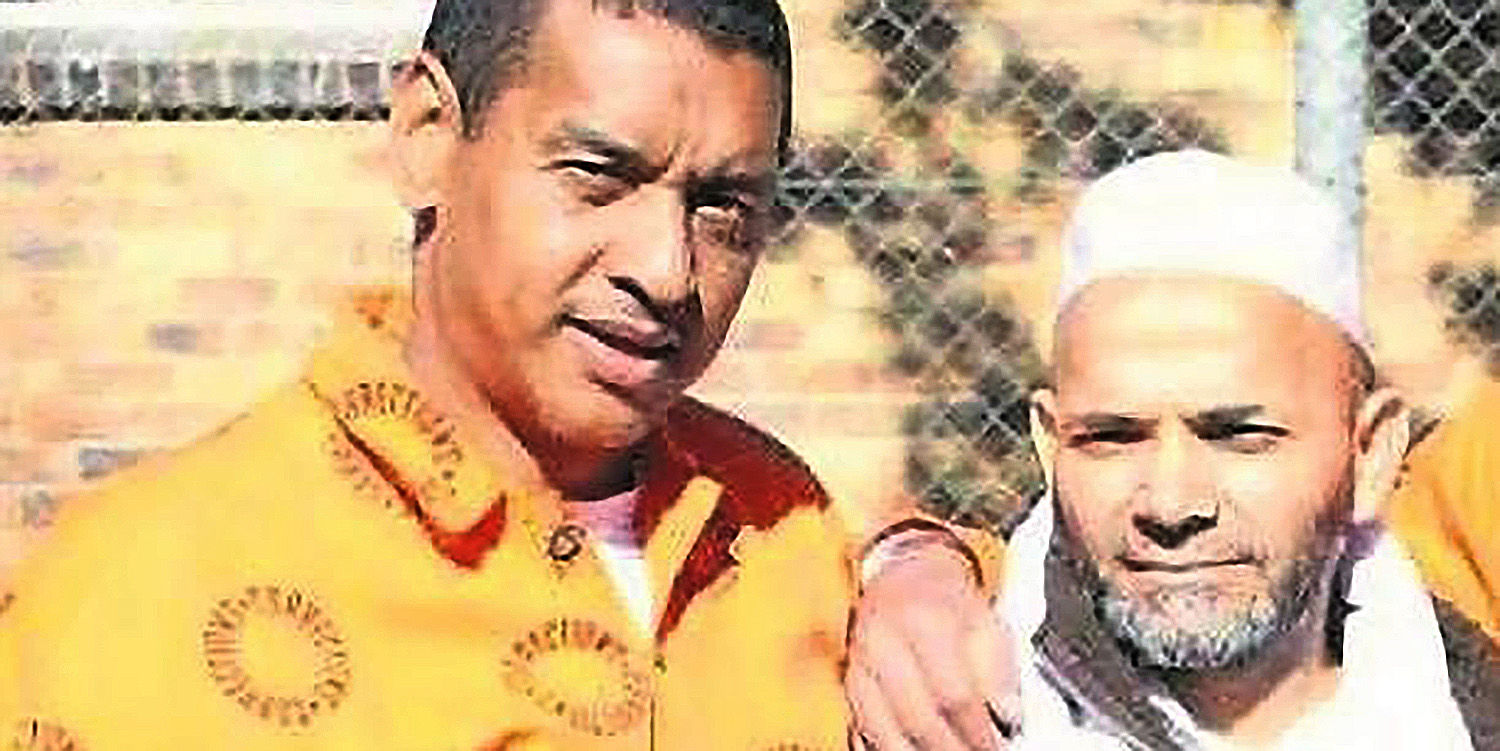 Ebrahim Jeneker with Pagad leader Abdus-Salaam Ebrahim during a visit while he was serving his sentence. (Photo: Supplied)

Ebrahim Jeneker, a former member of the People Against Gangsterism and Drugs (Pagad) group, is being held on suspicion of driving a stolen car. He was also outside an area stipulated in his parole conditions.

Police spokesperson Warrant Officer Joseph Swartbooi said: “The Rawsonville police responded to a complaint about a presumed stolen motor vehicle on Saturday, 18 June. The patrol vehicle drove in the direction of the N1 highway when they noticed a white Isuzu truck that fitted the description of the suspicious vehicle around 10 pm.

“The police members followed the vehicle and brought it to a halt. Three males aged 54, 17 and 14 were arrested on a charge of possession of a stolen motor vehicle.”

Jeneker, Abdullah Maansdorp and Moegamat Isaacs, former members of Pagad – the organisation that became synonymous with vigilante-style attacks in Cape Town in the late 1990s – were released on parole in November 2020.

One of the parole conditions was that they should not leave the Cape Town district without permission from correctional services officers.

Jeneker is also not allowed to speak to the media, so a close family friend spoke on his behalf on condition of anonymity on Monday.

The friend said Jeneker runs a landscaping business and had a contract to lay grass at schools in the Worcester area.

“On 14 June 2022, Jeneker … informed the parole officer in Mitchells Plain that he would be going to Worcester to fulfil his grass contract.”

On 16 June, the parole officer is said to have visited the home of Jeneker’s mother in Sherwood Park, Manenberg. Jeneker was already in Worcester, said the family friend.

It is then that Jeneker’s parole violation for being outside the Cape Town district became an issue.

On Monday, Pagad coordinator Haroon Orrie said they are waiting to hear when the parole board intended to hear the matter.

“What we can confirm at this stage is that Jeneker was outside his jurisdiction in terms of his parole conditions.”

Pagad, with a predominantly Muslim membership, was formed in 1996 to counter gang violence and drug-dealing on the Cape Flats. The result was overlapping clashes between police, gangsters, vigilantes and, most likely, intelligence operatives. A string of bomb blasts blamed on Pagad also rocked the city in the late 1990s.

Its leader, Abdus Salaam Ebrahim, was arrested in 1996 on suspicion of orchestrating a string of violent incidents that hit Cape Town in the 1990s. He spent time behind bars and was released on parole in 2008.

In December 2002, Jeneker was convicted on murder charges. The charges related to the slaying of three women in a Grassy Park hair salon in April 1999. Adiela Davids, a suspected gangster, her daughter Feroza Marcus and Marlene Abrahams were shot by gunmen wearing stockings over their heads.

Delekile Klaas, regional commissioner of the Department of Correctional Services, told Daily Maverick he was still waiting for a full report on the arrest of Jeneker. DM