Hail to the thief, fail to the chief — rot sets into...

Hail to the thief, fail to the chief — rot sets into SA presidential security service 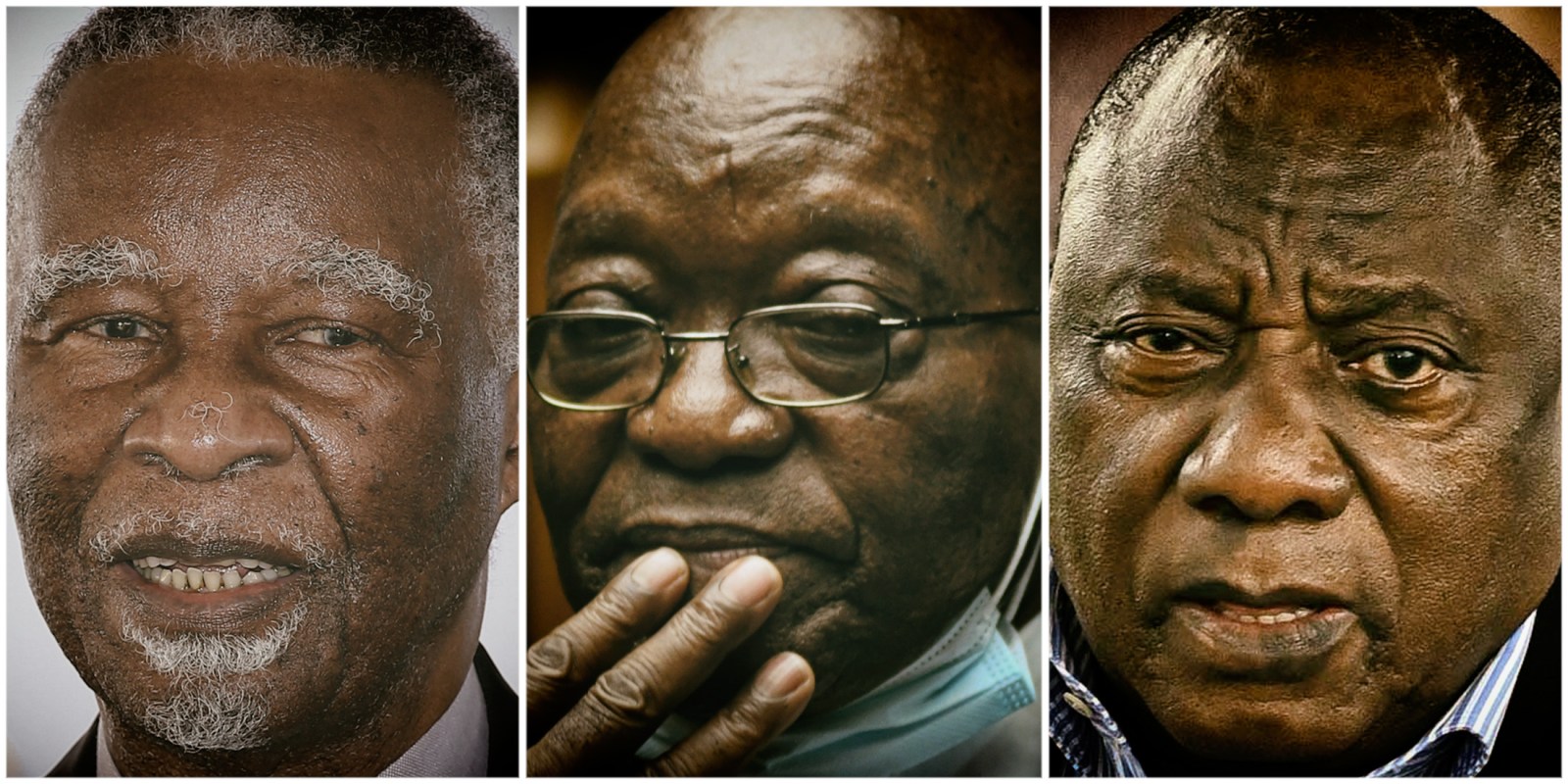 With a history of embarrassing security breaches in what should be our nation’s most impenetrable homes, South Africans would be justified in asking: Where are the billions set aside for VIP Protection Services going?

When, in September 2000, a man managed to evade security and make his way with remarkable ease into then-president Thabo Mbeki’s Genadendal residence in Cape Town, news of the security breach made international headlines. This was despite best efforts from our “red-faced” police force to keep it hushed up.

The intruder — who broke in through a window — reportedly spent several days “living like a king” in the presidential abode, quaffing expensive brandy and sleeping in the former president’s beds.

Mbeki was attending the United Nations millennium summit in New York, and his spokesperson was reported as saying that “no one was in the house at the time”.

Only three days after the intruder gained entry was evidence of the break-in discovered by law enforcement. The Presidential Protection Service, the unit entrusted with guarding our heads of state, was called in, but declared the house “intruder-free” after failing to detect the man who had hidden in the attic.

It was a day later that the intruder was eventually discovered and arrested, after he bumped into the presidential cook.

The presidential estate had appeared well protected, with security fencing and its entrances guarded by protection services; however, News24 reported that in 1998 while Mbeki was deputy president, a gardener (who had been granted security clearance despite facing murder charges) had stolen copper chains from the same compound.

Fast forward to 2022 and former presidents Mbeki, Jacob Zuma, and now President Cyril Ramaphosa’s administrations have all been marred by security breaches that have taken place at their homes.

In May 2008, News24 reported that burglars scaled the roof of Mbeki’s official residence in the Bryntirion Estate in Pretoria and stole aluminium wire worth between R20,000 and R30,000.

The security breach relating to “trespassing and theft” at Mbeki’s residence was included (albeit in less detail) in the South African Police Service Annual Report 2008/2009.

Between April 2009 and March 2010, security at former president Jacob Zuma and his Cabinet’s heavily guarded Bryntirion Estate in Pretoria was reportedly breached several times. The incidents included “theft of floodlights” from Zuma’s Presidential Guest House in Bryntirion and thefts from the ministerial residential Bryntirion Estate, including trespassing and housebreaking, which are included in the 2009/10 SAPS annual report.

And on 9 February 2020, as Rebecca Davis laid out here, burglars who were allegedly acting in cahoots with a domestic worker invaded President Ramaphosa’s Phala Phala farm in Limpopo and got away with millions of US dollars. This came to light when former South African spy boss Arthur Fraser ambled into a Johannesburg police station and laid a criminal charge against the President, as was reported by Ferial Haffajee.

Daily Maverick’s Marianne Merten further pointed out here that the security breach at Ramaphosa’s farm was omitted from the 2019/2020 annual SAPS report, raising further questions and compromising the document as a key oversight and accountability tool.

It’s not an option that Ramaphosa’s residences are unprotected, noted Merten, and it would be curious if they did not receive VIP protection.

Considering that R1.66-billion was spent on SAPS VIP Protection Services in the 2020/2021 financial year, one would think this could cover adequate security for presidential estates. 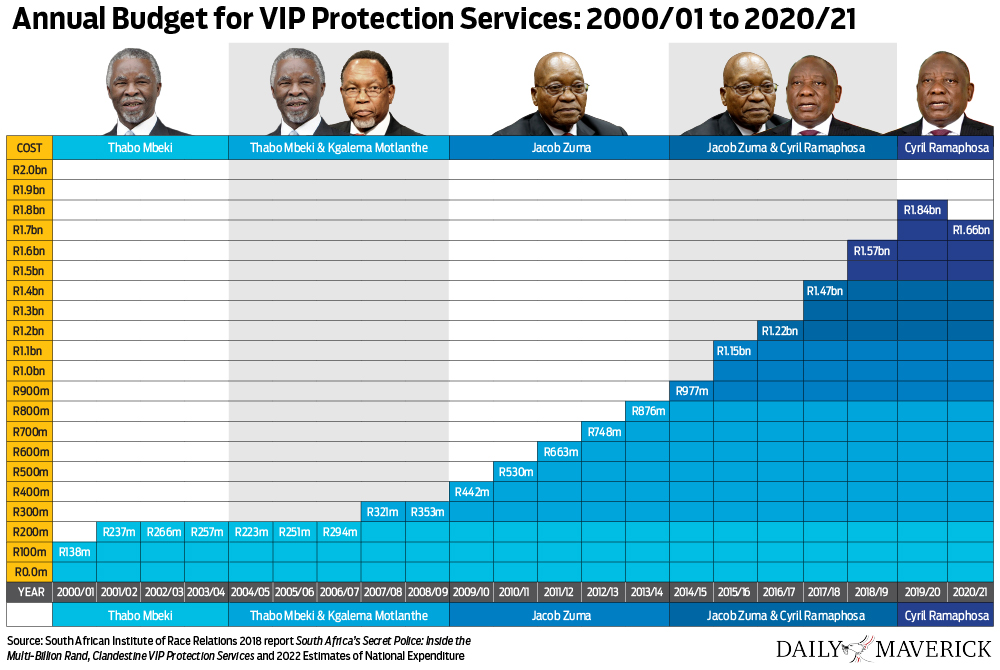 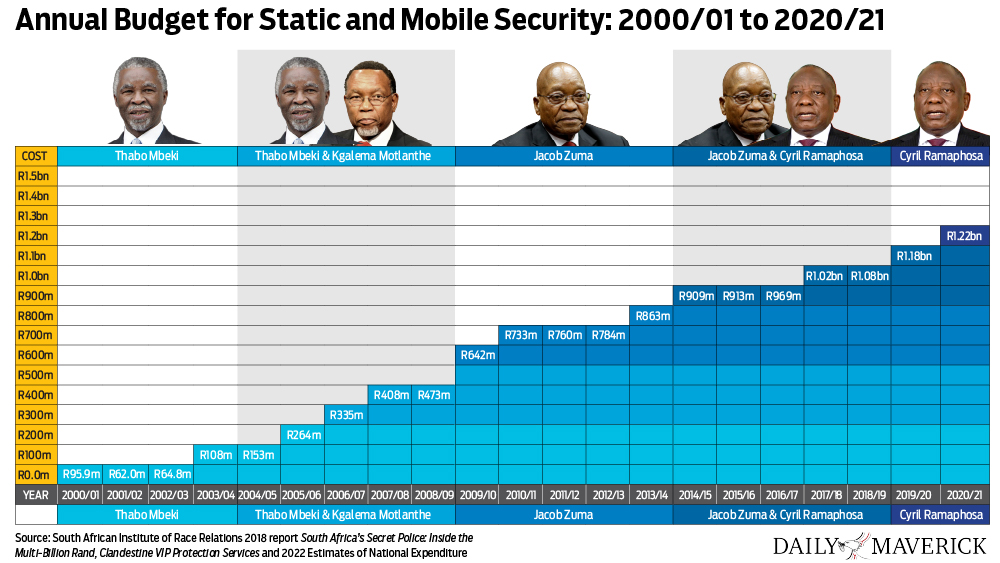 Such security breaches at the homes of South Africa’s leaders should be regarded as “incredibly serious, considering that we spend almost R2-billion on VIP Protection which includes the Presidential Protection Services,” DA shadow minister of police Andrew Whitfield told Daily Maverick.

The key question, said Whitfield, was whether taxpayers were getting value for money from the police budget.

In general, the answer was no, specifically when it came to the SAPS VIP Protection unit, said Whitfield.

“The budget for VIP Protection is grossly inflated. Relative to the service that ordinary South Africans get from SAPS, I think that it’s completely absurd that we spend this amount of money on the protection of VIPs — and as we’ve now seen, the money that we’re spending is not necessarily securing those VIPs,” he said.

“The system of VIP Protection should be beyond reproach and certainly not have any cracks in it to allow criminals to enter official state homes and private residences.”

A 2018 report by the South African Institute of Race Relations (IRR) titled South Africa’s Secret Police: Inside the Multi-Billion Rand, Clandestine VIP Protection Services, looks at the “enormous rise in expenditure on VIP Protection over the past two decades to demonstrate the degree to which this exceedingly well-funded police force operates in secret and, generally, without accountability.”

Author of the report Gareth van Onselen concludes that; “The greatest of all these mysteries is the Presidential Protection Services, hidden away in other budgets, without any stand-alone reporting lines, it remains an operational enigma.

“Ultimately, perhaps most importantly, the executive is never made to account for the rise in cost and personnel. The president, for example, is never called on to explain his attitude or the attitude of the executive towards VIP Protection and its necessity.”

The DA’s Whitfield agreed that “there’s definitely a shroud of secrecy covering the VIP Protection unit and the Presidential Protection Services as well”, saying previous questions posed by the DA over the costs of VIP security have been met with a refusal to comment from SAPS, which claimed that “revealing the details of this could compromise the security of the VIPs”.

“South Africans deserve to know that their tax money is being recklessly abused”, he said.

However, there have been several instances (that we know of) where private business people and officials who do not fall within the unit’s mandate have been provided VIP protection. It was previously revealed that the infamous Guptas received protection from the VIP Protection Services on five occasions during the 2010 Fifa World Cup in South Africa. 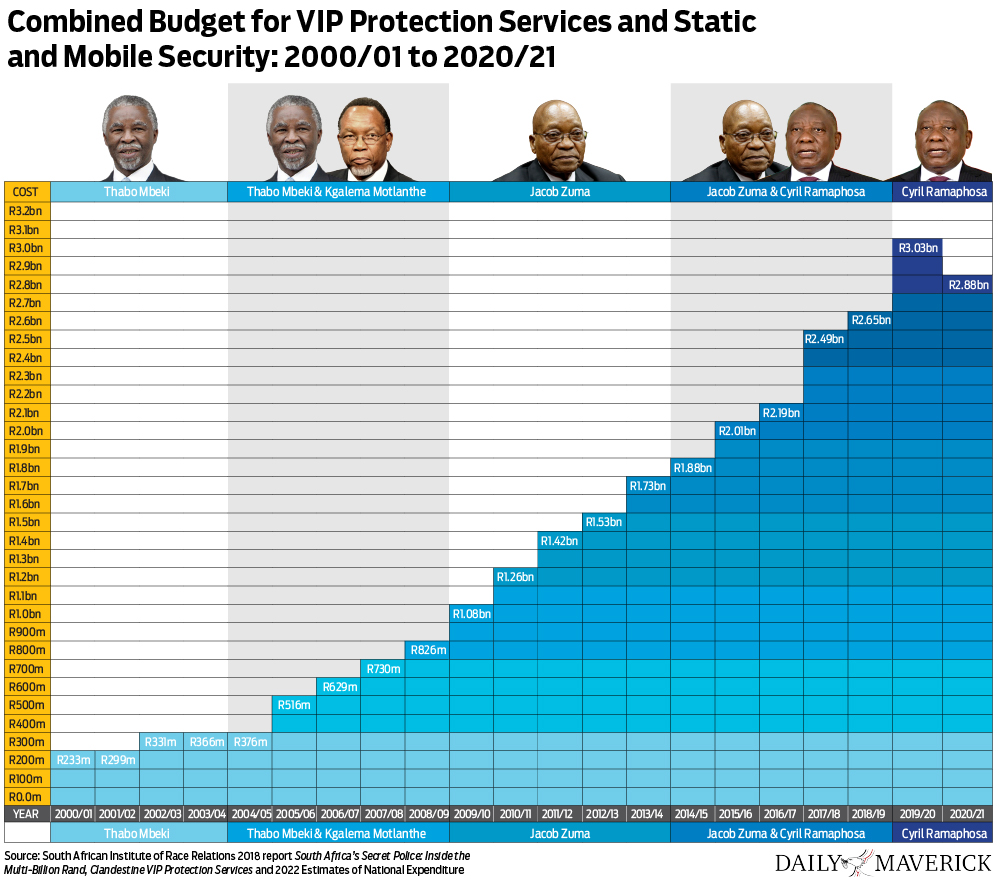 When Daily Maverick sent questions to SAPS on the marked vulnerability of our VIPs despite the billions spent on their security, the police refused to comment.

“Thank you for the opportunity to respond. The South African Police Service does not discuss security related matters concerning the Protection of VIPs in the public domain,” police spokesperson Colonel Athlenda Mathe said.

Daily Maverick inquired on the reason, but Mathe has yet to answer. DM