Death penalty returns to SA through mob murder – with spike in deaths due to blunt force injury, say doctors 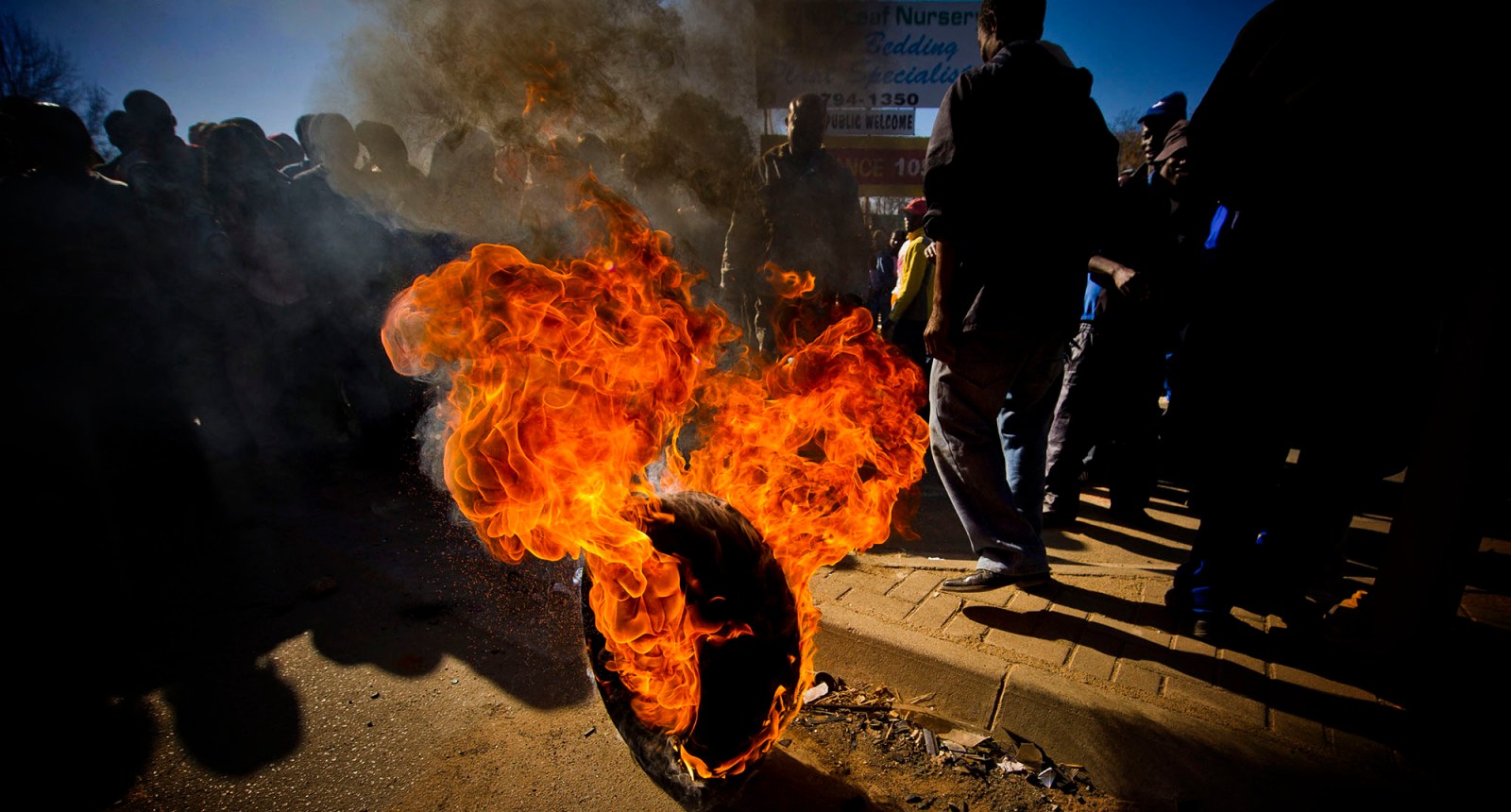 The death penalty has returned to South Africa. Although outlawed by the Constitutional Court in its first judgement in 1995, the breakdown in policing in townships and informal settlements has seen a rise in vigilante ‘justice’. Today, the number of people suspected of crimes who are being killed in an arbitrary and brutal fashion is growing. Once again, public health workers find themselves on the frontline.

Doctors who provide emergency care in Gauteng’s hospital emergency and trauma units have told Maverick Citizen about the marked increase in people who are being admitted with severe injuries linked to beatings and mob violence.

Many of these people die. Those that survive due to expert care are also draining scarce hospital resources as their injuries are so serious as to often require kidney dialysis, amputation and time.

Dr Riaan Pretorius is head of trauma at Chris Hani Baragwanath Academic Hospital (CHBAH) and is used to running a busy trauma unit. But even he is shocked at the rising prevalence of injuries due to mob violence. “It’s like a war zone” he says, noting that the unit is sometimes recording one to two deaths per week as a result of mob assaults.

“In the past we had only a few of these cases. Now there are many. The victims are mostly young people. During the lockdown it was difficult to access alcohol, which meant that many people turned to nyaope. Addiction to this drug seems to be making the violence even worse.”

“On some days there are between five and eight admissions and quite a number of these may require kidney dialysis.”

Dr Pretorius decries the brutality involved in the violence referring to “crush syndrome”, a medical definition most commonly used in relation to earthquake victims. He tells me: “When a person is violently sjamboked, for example, the muscles release toxins. The release of myoglobin into the kidneys leads to renal failure, necessitating kidney dialysis.”

Prof Martin Smith is head of surgery at Wits University and another person who has decades of observation and experience in surgery. He is also shocked.

“It’s an epidemic of vigilante violence we are seeing from our communities.” He adds: “I doubt any other country sees this kind of number.”

Statistics for mob assaults at CHBAH, compiled by the unit, bear out the doctors’ claims. They show that over the last 10 months 471 patients were admitted because of mob violence, 23 of them died —  a 5% mortality rate.

Smith reports that between May and November 2018 the number of crush injury patients admitted to CHBAH was 83, with five deaths. The average age of those admitted was 28. However, Smith says that, unlike the 2021/22 data, the records from 2018 do not specifically reflect “mob violence” and may include other causes.

“However, it would include all the ‘mob violence’ cases and so is more likely to be an overestimation of cases during that time period.”

What the comparison shows is that the numbers are rising and this epidemic is getting out of control. Maverick Citizen tried to establish whether the patterns being seen at CHBAH are also experienced at other hospitals in Gauteng.

According to sources, both Helen Joseph and Leratong hospitals confirmed an increase but couldn’t give exact numbers because they don’t have dedicated trauma units.

However, Kwara Kekana, spokesperson for the Gauteng MEC for health, told us that admissions due to mob violence are not increasing and therefore a strategy to reduce mob violence was “not applicable”. Kekana said data on incidence is only kept at a hospital level “for the purpose of clinical treatment not for statistical purposes”.

Alaric Jacobs, the principal communications officer for the Western Cape Department of Health, says the department does not keep statistics on the incidence of mob violence-related injuries and mortality in its health facilities. However, doctors we spoke to say mob violence is a significant cause of trauma and is on the rise.

Dr Andrew Nicol, director of the Trauma Centre at Groote Schuur Hospital and a professor of surgery at the University of Cape Town, said patients they see “usually present as polytrauma” – traumatic brain injuries with multiple fractures requiring high care or ICU management. Many of the patients have such severe muscle and soft tissue damage from beatings that they require haemodialysis as a result of subsequent kidney failure.

Depending on the severity of the injuries, and whether they are admitted to ICU, treating a victim of mob violence can cost anywhere between R5,000 and R50,000, says Pretorius. Given that this epidemic is being carried entirely by public hospitals (private hospitals are in suburbs with catchment areas away from communities where law and order has broken down and patients are uninsured) it is probably costing hundreds of millions of rands a year.

According to sources, this money would be more effectively spent on funding visible policing and the criminal justice system, to work to prevent mob violence in the first place. According to the Institute for Security Studies, for example, between 2011/12 and 2019/20 the number of South African Police Service personnel nationally declined by 11,987.

Cases involving criminal violence are recorded as “blunt assault , sjambok, blunt assault and sjambok” and “unknown mechanism”. However, the cause and source of the injuries seen by Pretorius and his team do not appear to be of much concern to the SAPS.

“The police only escort criminals with injuries to the trauma unit,” says Pretorius, noting that there appears to be no follow up when victims are the people admitted.

“We should have a police station based outside the trauma unit at Bara”, he says. And he’s not joking.

Annah Moyo-Kupeta, executive director of the Centre for Study of Violence and Reconciliation (CSVR), confirms the prevalence of mob violence is rising. She says mob violence is one of four pillars of violence CSVR is focussing on and its rise is one aspect of a wider “normalisation of violence” in South Africa.

Moyo-Kupeta explains that mob violence is part of a toxic broth in which poor communities are stewing, and it is linked to poor socio-economic conditions, pandemic-related desperation and, “when all else fails”, scapegoating.

“It’s going to get worse,” she says, noting: “our government is so blind, they think they can arrest all the perpetrators, but that’s not working.” (See a fuller explanation by Moyo-Kupeta here). In a May 2021 article, Moyo-Kupeta noted that “at least two people die as a result of mob violence or vigilante group attacks per day … and the figures are expected to be much higher given that police do not establish motives in all murder cases”.

Gareth Newham, head of the Justice and Violence Prevention Programme at the Institute for Security Studies (ISS), agrees. He notes that, according to SAPS own statistics, between 1,000 and 1,200 murders in 2019/20 were due to mob/vigilante violence.

Newham said that in the past, two thirds of murders were due to interpersonal violence, but now the primary recorded cause is “intergroup conflict”. Questions were sent to SAPS Gauteng spokesperson Captain Mavela Masondo, who said she “was verifying information with investigating officers”. Despite several reminders, no response was forthcoming.

The epidemiology of mob murder

Police and government ought to have a plan, because, though the problem is getting worse, it is not new.

In 2021, the journal Forensic Science, Medicine and Pathology published an article titled “Mob Justice Fatalities in South Africa: A forensic mortuary study”. It reported the results of a 10-year study between April 2006 and March 2016 at Germiston Forensic Pathology Service Medico-legal Mortuary.

The study set out to describe “the demographics of the victims of fatal mob justice, the trends of the number of fatalities and causes of death over time; assess hospitalisation frequency … the nature and location of injuries sustained, and to report on ancillary investigations performed”.

This accords with SAPS records. For example, in 2019/20, though no provincial breakdown of deaths due to mob violence was provided, the report listed instruments used in murders:

The pain and suffering inflicted using ad hoc weapons such as these is hard to imagine. Not without good reason then do the authors of the Germiston study conclude that “mob justice fatalities are a gross violation of human rights as they represent extra-legal punishment”.

The question is: What are we going to do about it? DM/MC

Note: The following questions were sent to Gauteng SAPS but were not answered:

The offer to SAPS to comment and shed further light on this issue remains open.