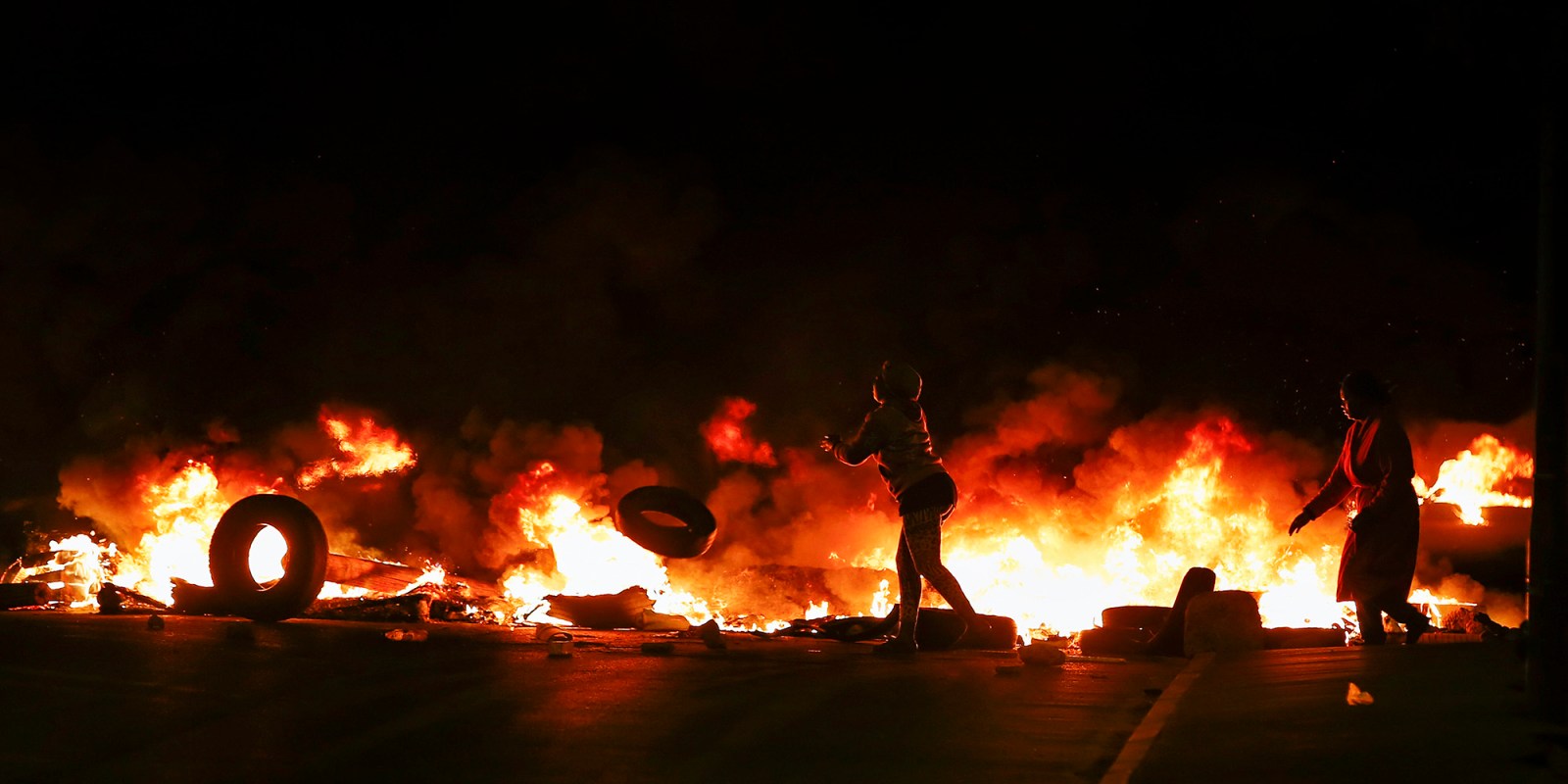 Unrest is on the rise again worldwide, according to a new working paper by the International Monetary Fund. This troubling trend may gain traction in the face of surging fuel and food prices and could pose a significant threat to the global economic recovery.

The initial wave of Covid restrictions put a lid on rising social unrest. But as restrictions have eased amid economic turmoil which now includes soaring fuel and food inflation, expect people to increasingly take to the streets to vent their rage.

That, at least, is a scenario one can draw from the International Monetary Fund’s (IMF)  update to a 2020 paper measuring unrest, which takes the latest data to March 2022.

“From mid-2019 until the onset of the pandemic, social unrest rose, a continuation of a trend since 2016, peaking in late 2019 as a wave of protest swept through Latin America.

“Once the pandemic hit, though, unrest declined sharply, coincident with lockdowns… However, as countries have loosened restrictions and the pandemic has waned, unrest has since risen,” the working paper says.

Of course, even when global lockdowns were at their toughest levels in 2020, unrest did not vanish. There were racial justice protests in the US, anti-government unrest in countries such as Brazil and inter-ethnic tensions roiling in Ethiopia.

“Social unrest has continued through the later stages of the pandemic, with events in both advanced economies and in emerging and developing economies. In the former group, protests have erupted in places where major social unrest is usually rare, often with anti-government or anti-lockdown motives, including in Canada, New Zealand, Austria and the Netherlands,” the IMF said.

“In emerging markets and developing economies, though, the putative motives for unrest have been more diverse, with examples including anti-government protests in Kazakhstan and Chad, a coup in Burkina Faso, regional protests in Tajikistan and a constitutional crisis in Sudan.”

This is obviously not a complete picture. The 6 January 2021 insurrection at the US capitol comes to mind. And, of course, there were the July 2021 riots and looting in South Africa which rocked parts of KwaZulu-Natal and Gauteng, killing at least 350 people. 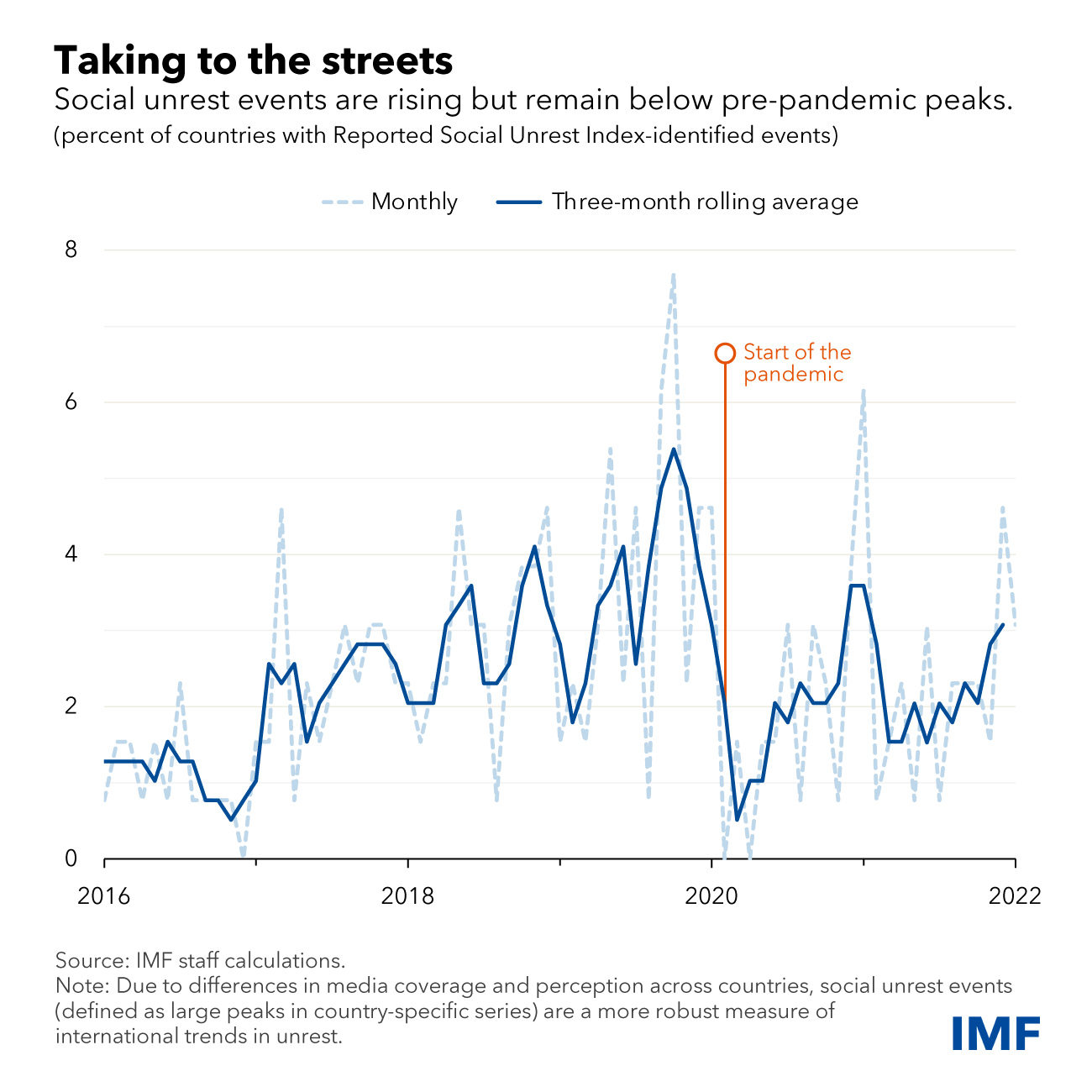 Unrest on a global scale remains below pre-pandemic levels, but there is plenty of combustible material out there for the next round of fires.

“In coming months, two important factors could lead to an increased risk of future unrest.

“First, as governments relax restrictions and public concerns about catching Covid in crowds diminish, pandemic-related disincentives for protest might abate.

“And second, public frustration with rising food and fuel prices may increase.

“Although the economic causes of civil disorder are complex, and unrest is exceptionally hard to predict, steep price increases for food and fuel have been associated with more frequent protests in the past,” the IMF noted in a blog post accompanying the paper. Any rise in unrest could pose a risk to the global economy’s recovery, as it can have a lasting impact on economic performance.

In a paper last year, IMF staff showed that unrest can have a negative economic impact as consumers become spooked by uncertainty and output is lost in manufacturing and services.

“As a result, 18 months after the most serious unrest events, gross domestic product is typically about one percentage point lower than it would have been otherwise.”

There are red flags galore on this front for South Africa as winter settles in and Eskom battles to keep the lights on.

The ANC’s internal battles — which boil down to who next gets to eat at the public trough — are a dangerous flashpoint.

Against the backdrop of rising unemployment, poverty and hunger in the face of fuel and food inflation, expect sparks to fly and the economy to get singed. DM/BM