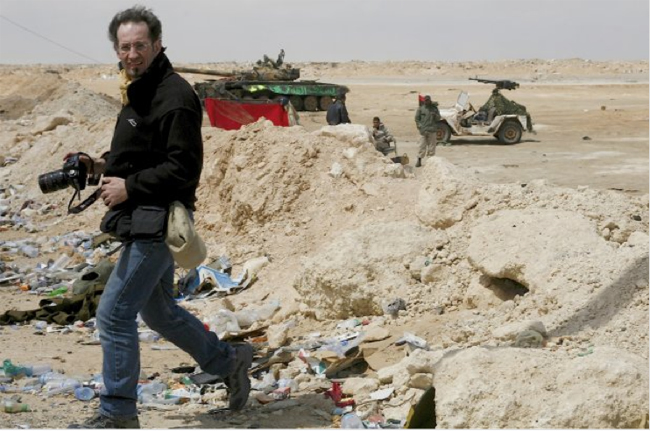 More than a decade after his death – and now with the backing of a top UK law firm – Anton’s family say the government’s refusal to open up about the passport it sent them has left them with no choice.

In 2016, Penny Sukhraj-Hammerl received a passport in the mail. It belonged to her dead husband, photographer Anton Hammerl, whose body she had spent three years searching for.

During that time, every lead that held the promise of bringing back Anton’s body from Libya had come to nothing.

Finally, she had something that Anton was carrying at the time of his death, a clue that should have provided a trail leading back to that day in April 2011 when Muammar Gaddafi loyalists disposed of his body.

But the next five years proved to be frustrating for Anton’s family.

The South African government, which had sent the passport, has refused to say how it had come into its possession.

Now, on the 11th anniversary of the announcement of Anton’s death, Penny and her legal representatives from Doughty Street Chambers in London have gone public about the government’s refusal to provide information about the passport.

On Thursday, they sent a letter addressed to the South African High Commissioner to the UK, Nomatemba Tambo, and copied in President Cyril Ramaphosa and International Relations and Cooperation Minister Naledi Pandor.

“It’s been nearly a year since I first wrote to you and your government to request a meeting regarding the case of my late husband, South African photojournalist Anton Hammerl, who was murdered by Gaddafi forces in Libya in April 2011,” Penny wrote.

“That’s why we now have no choice but to disclose publicly what we had hoped to discuss with you privately.”

Penny is convinced that the passport was with her husband when he was shot dead by Gaddafi’s forces on 5 April 2011.

“He would not have left the passport in the hotel room, because you need to have it when you’re out on the field,” she explains.

There was no passport with his belongings when his hotel room was cleared later.

In 2021, Penny’s search for her husband received a boost. It was announced that Doughty Street Chambers, a legal firm that specialises in human rights and civil liberties, would take the case.

The firm has acted in cases involving the deaths of several high-profile journalists, including the killing of Jamal Khashoggi and Maltese investigative reporter Daphne Caruana Galizia.

To find out more about the passport, Doughty Street Chambers launched a Freedom of Information request for South Africa to provide all communications between it and Libya related to Hammerl’s death.

The documents they received had missing information and there was no mention of Anton’s passport.

“Why did they see fit to withhold this from us? Why was there no record of this coming to me in 2016? And if there is a record, why didn’t they include it in the FOIA request?” Says Penny.

Anton left for Libya from London on 28 March 2011. He and Penny had travelled to London from South Africa where he had worked at The Star, the Saturday Star and Sunday Independent newspapers.

The country he was travelling to was the latest casualty of the Arab Spring. It was becoming increasingly violent as rebels marched westward, facing desperate Gaddafi loyalists. The war would be particularly hard on journalists, and by the time Gaddafi was ousted five of them would be dead.

On 5 April 2011, the day of his death, Anton teamed up with three other journalists – James Foley, Clare Gillis and photographer Manu Brado – and headed west from their base in Benghazi.

Not far from the town of Brega, they came under fire from Gaddafi loyalists.

Later, Gillis recalled what happened. In the shooting, Anton was hit in the stomach and called out for help. With few options, the three journalists gave themselves up and were beaten by the soldiers before being dumped in a truck.

Anton was left to die in the desert.

For the next six and half weeks, Anton’s family were led to believe he was still alive and being held captive with the other journalists.

Penny only learnt of her husband’s fate on 19 May, the day after the three journalists were released.

There have been a few leads since then. A year after his death it was reported that a body had been found in a mass grave, and that it appeared to be a white male with black hair and of Anton’s height. It was in a coffin marked No 57.

DNA was said to have been taken, but the trail went cold.

Heading to Libya to chase down leads is difficult at the moment, since the country is in the grip of a savage civil war.

The South African High Commission in the UK has acknowledged receipt of the letter and told Penny it has been forwarded to the relevant departments.

Speaking to Daily Maverick, Clayson Monyela spokesperson for Dirco said it is up to the Libyan authorities to explain how they obtained the passport.

“The way it normally happens, if it’s in a foreign country and somebody dies, the authorities in that country will be in charge of the investigation. So if they pick up the documentation of somebody who has passed on as a foreign national, they would then send that document to the country of that individual, in this case South Africa,” he says.

For Anton’s family, the passport might just be the break in a search that has gone cold.

“If we could find the breadcrumb trail left by the passport, it would just be so helpful,” says Penny. DM