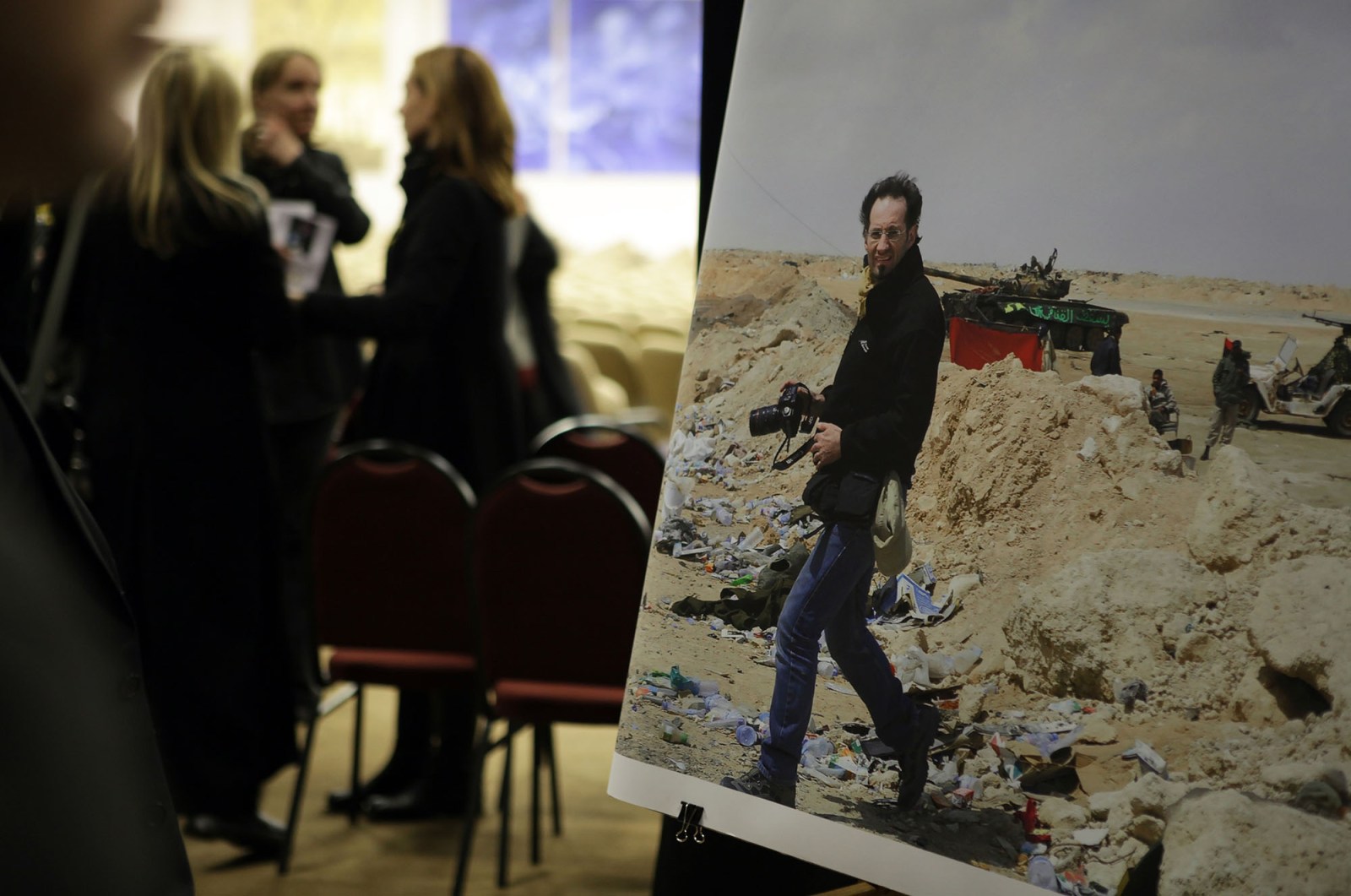 Photographs of the late South African photographer Anton Hammerl on display at his memorial service at His People Church at Parktown on July 2, 2011 in Johannesburg, South Africa. Hammerl was killed by pro-Gaddafi forces in April while covering the war in Libya. His remains have still not been found. (Photo by Gallo Images / Sunday Times / James Oatway)

Ten years after South African photographer Anton Hammerl was killed the trail to find his body has long gone cold, and his killers are still walking free. But now all of this could change.

On Thursday, Hammerl’s wife, Penny Sukhraj-Hammerl, with the help of human rights lawyers, filed three complaints with the United Nations, to initiate an investigation they hope will identify those involved in his death and possibly locate his remains.

The first complaint is to be filed with the new UN special rapporteur on extrajudicial, summary or arbitrary executions, Dr Morris Tidball-Binz.

The other complaints are to be directed to the special rapporteur on freedom of expression and the UN working group on enforced or involuntary disappearances.

“We are asking that they raise serious concerns with the Libyan authorities and we are also asking that they urgently request information from the South African, Austrian and UK authorities,” says Caoilfhionn Gallagher QC, a barrister at Doughty Street Chambers in London, which is representing Hammerl’s family.

The law firm specialises in human rights and civil liberties and has acted in cases that involved the deaths of several high-profile journalists.

The firm has also worked on the Jamal Khashoggi murder, and that of Maltese investigative reporter Daphne Caruana Galizia.

However, unlike these two murders, Hammerl’s killing is now a cold case that happened in a country that is still recovering from the civil war that the then 41-year-old freelance photojournalist went to cover.

On 28 March 2011, Hammerl kissed his wife goodbye at a London station. The couple had moved to the UK from South Africa.

It was still in the early days of the uprising against Muammar Gaddafi, and reporters and photographers from around the world were flocking to Libya, to report on the latest country to be swept up by the Arab Spring.

But this bloody civil war was to be particularly deadly for journalists.

By the time Gaddafi was ousted, five journalists were dead.

A week later, on 5 April 2011, Hammerl teamed up with three other journalists – James Foley, Clare Gillis and photographer Manu Brado – and drove west from their base in Benghazi.

What happened on that fateful day Gillis would later tell to journalists after her release from captivity. She told how they came across a firefight and were shot at by Gaddafi loyalists.

In the confusion she heard Hammerl call out for help and noticed he had been shot in the stomach. The three journalists were then beaten by the soldiers and bundled into a truck. Hammerl was left on the desert floor to die.

For the next six and half weeks Hammerl’s family were led to believe that he was alive and being held captive with the three other journalists.

Libyan officials passed on this information to the South African and Austrian governments. The latter was involved because Hammerl held dual citizenship.

The Libyans even went so far to say that Hammerl had told them he wished to speak to his family.

It was only a day after the three journalists were released on 18 May that Hammerl’s family was told he was dead.

“One of the problems is that you have a state that is not complying with its obligations to conduct and investigate where there has been the violent death of a journalist. We feel in Anton’s case Libya is not doing this and has not been complying with its international obligations for the last 10 years,” says Gallagher.

“And there is good reason from the material we have seen to suspect that Libyan officials were involved in a cover-up of what appears to have been a war crime.”

Gallagher says they believe the Libyans committed several violations of international and humanitarian law, including intentional murder and directing attacks against civilians.

In the months following Hammerl’s disappearance there were efforts to send people to Libya to try to find his body, but the deteriorating situation in the country prevented this.

Then, a year after his death came the news that he might have been found.

A body was discovered in a mass grave near Bin Jawwad, a town 200km west of Brega.

The body was reportedly in a coffin marked number 57 and was said to be that of a white male, with black hair and of Hammerl’s height, who had died around 5 April 2011. The individual had been killed by pro-Gaddafi forces.

A camera lens was also said to have been found with the body.

DNA samples were said to have been taken but it is unclear whether they were analysed.

The family has heard nothing since and there have been few leads.

“The trail has gone cold, and that is just horrifying,” says Gallagher.

The launch of the #JusticeforAnton Campaign on Thursday is an online event. Among the speakers are Sukhraj-Hammerl and Diane Foley, whose son James Foley was executed by the Islamic State group in Syria in 2014.

Foley might one day help in piecing together the circumstances around Hammerl’s death. He returned to Libya to search for Hammerl’s body and left detailed notebooks of his journey, which Gallagher hopes will help in their investigation.

Sukhraj-Hammerl last spoke to her husband on the night before his death on Skype. He told her he would be heading out with other journalists.

She is launching the campaign because she feels emotionally ready to work towards getting justice for her husband, and finally discover the truth behind his death.

She says that for the past 10 years she has had to focus on raising her two sons, one of whom was eight weeks old when Hammerl left for Libya.

One recent development in Libyan has given both Sukhraj-Hammerl and Gallagher hope that it could be possible to find Hammerl’s remains.

Earlier in March the bodies of four Filipino oil workers who were killed in Libya in 2015 by Islamic State were located. Their bodies were found in a cemetery in Derna, after pressure from the Philippine government.

“What this shows is that it is not hopeless,” says Gallagher.

One person who welcomed the launch of the #JusticeforAnton Campaign is Hammerl’s friend and fellow photographer, Thys Dullaart.

The two had first studied together, then worked together at Independent newspapers in the 1990s and early 2000s.

In that time Hammerl worked at The Star, the Saturday Star and the Sunday Independent newspapers, before going freelance and moving to London.

“He was just this incredibly solid human being, with this unfailing enthusiasm for life,” remembers Dullaart. “He would always find these amazing stories”.

Those who knew him also remember his keen eye for fashion that made him the most stylish photographer on assignment.

“That was Anton, no matter what was happening he had this sense of style, that was kind of effortless.

He was also an all-round good photographer,” says another photographer and friend, John Hogg.

But the journey to find the truth behind Hammerl’s killing and to bring his killers to book is likely to be hard.

“We are very much at the beginning and we don’t know where we will end up. But we are really hopeful” says Sukhraj-Hammerl. DM

For more about Hammerl read the following on the CPJ website.