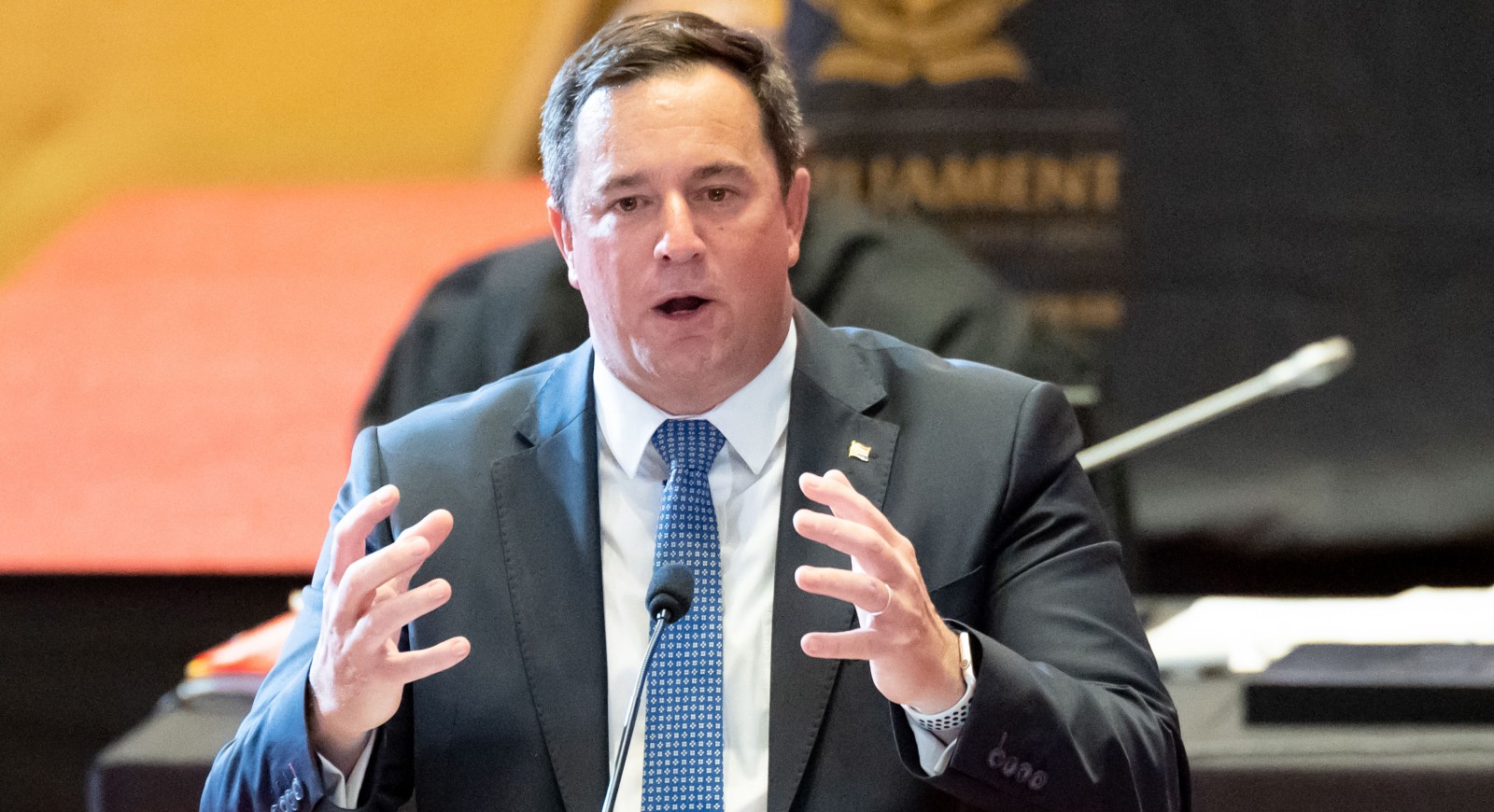 DA leader John Steenhuisen at the parliamentary debate in the on the State of the Nation Address (Sona) President Cyril Ramaphosa delivered on 10 February. (Photo: Gallo Images / Jeffrey Abrahams)

If the DA motion of no confidence in the Cabinet under section 102(1) of the Constitution is approved — it needs a simple majority in the National Assembly — President Cyril Ramaphosa would be forced to reconstitute his Cabinet.

Plenty of ifs exist about DA leader John Steenhuisen’s proposed motion of no confidence in the Cabinet. First it must be scheduled, and then debated. The numbers are against the opposition, but it could be very tight for the governing ANC if not all of its 230 MPs, including ministers and their deputies, show up on the day, especially if the EFF were to support the DA motion irrespective of their ideological differences.

But the political point was made with this constitutional no-confidence motion in Cabinet — particularly in the wake of the State Capture commission reports and the presidential panel’s scathing findings of security cluster ministers’ failures to manage responses to the July 2021 public disorder.

“If it’s not possible for you to hold your executive accountable and still survive as president, then we will take that burden off your hands and let this House fire them for you,” was how Steenhuisen put it on day one of the parliamentary debate on the State of the Nation Address (Sona) President Cyril Ramaphosa delivered on 10 February.

His “no confidence in Cabinet” motion doesn’t mince its words either.

“[It] acknowledges that several Members of the Executive who have been implicated and found responsible for the governance failures, acts of alleged corruption and maladministration have not been held accountable for their actions nor faced any real consequences, as the interests and loyalties of those in the governing party to which most of them belong are placed above those of the Republic.”

A thread of no confidence in Cabinet ministers also ran through EFF leader Julius Malema’s debate contribution. He outlined how Ramaphosa’s pro-business Sona and private sector personality appointments to the Presidency in themselves were Ramaphosa’s “no confidence in your ministers”.

Also on board was African Transformation Movement (ATM) leader Vuyolwethu Zungula, who’s waiting for the scheduling of his no-confidence motion in Ramaphosa, resubmitted in December 2021 after the courts said decisions on secret ballot are for the National Assembly Speaker to make, rationally.

“You [Ramaphosa] don’t have confidence in yourself, and your government,” said Zungula.

How National Assembly Speaker Nosiviwe Mapisa-Nqakula handles Monday’s DA constitutional motion of no confidence in Cabinet, and the earlier ATM presidential no-confidence motion, will reflect Parliament’s commitment to its constitutional responsibilities without fear, favour or prejudice.

The DA’s motion plays straight to the opposition’s politicking to assist Ramaphosa to get South Africa working. It was first made in the 2021 parliamentary Sona debate when Steenhuisen announced a raft of draft legislation to deal with red tape, support small business and diversify energy.

“We are here to lend you a hand, to help you do right by the country rather than your party,” said the DA leader then.

On Monday, after pointing out how ANC MPs had opposed all such draft laws, Steenhuisen styled the no-confidence motion as another helping hand.

“So what do you say, Mr President? Are we going to help you fire your Cabinet and give your executive a fresh start? Will you let us help you drive through the economic reforms that your comrades don’t support? Or are you content to see out your time in office as the president too afraid to put his country before his party?”

For Malema, Ramaphosa’s administration also is failing, and he cautioned of the nightmare of Ramaphosa getting a second term as party and country president.

“You are currently the worst president for black people,” he said in a Sona debate contribution that, as in 2021, slammed rising hunger and poverty, joblessness and inequality.

“Sending our people to the private sector for jobs is like sending cattle for slaughter.”

Ramaphosa had sold out to “White Monopoly Capitalism”, leaving him a “shapeless president” relying on task teams, panels, commissions and envoys.

“The situation in South Africa has gone from bad to worse. Your dream of being a president has come true. Now that you fulfilled your dream… why are you not leaving us in peace?” said Malema.

“Now you want to come serve a second term. You have done nothing. You are all talk, you are not doing anything.”

The political point was made. This “all talk, no action” theme ran through not only the speeches from Steenhuisen and Malema, but also other opposition leaders like Freedom Front Plus leader Pieter Groenewald — “Empty promises and hollow words will not achieve that” — Cope, and somewhat more politely, in the IFP’s contribution.

The ANC was lukewarm in its response to such often acerbic criticism. It focused on dissing the DA as racist and hypocrites — Home Affairs Minister Aaron Motsoaledi invoked Bible verses to support this — and reminded the EFF they were beneficiaries of ANC policies before largely sticking to prepared scripts to plod on about how Ramaphosa’s Sona really was responsive, inspiring and comprehensive.

With all but two speakers for the ANC being Cabinet ministers, perhaps it was a case of no one wanting to take the wind out of their boss’s sails. Ramaphosa gets his reply on Thursday afternoon.

Malema earlier had said that Cele must go, given the instability and infighting in the police and broader security services. Challenged on an EFF point of order, and asked to repeat this claim outside Parliament, Cele said: “I will repeat it on Friday at 12 when I give the crime stats.”

Earlier, Minister in the Presidency Mondli Gungubele, who was up immediately after Steenhuisen, tried to swat away bruising DA criticism by dismissing Steenhuisen’s talk of the DA governance delivery difference as a “racial difference”.

“The DA difference is a racial difference. You see it in the police station in Gugulethu and the police station in Bishopscourt,” said Gungubele in a rather unfortunate example, as policing is a national competency under the SAPS and Cele. He then segued to Ramaphosa’s Sona: “You have captured the imagination of our people as you went on to ignite their hope to heal their aspirations.”

“The ANC seeks to build a developmental state, and a developmental state is not meant to obliterate the private sector,” said Masondo, echoing Ramaphosa’s words in his weekly Monday newsletter. “We are dealing with the legacy of settler colonialism; the state has to assist those who had been excluded.”

Health Minister Joe Phaahla, in his debate contribution on matters Covid-19, later paid tribute to the president. “It is only the blind and the deaf who don’t appreciate [that] he is doing a sterling job guiding the country through the pandemic.”

Human Settlements Minister Mmamoloko Kubayi closed the debate by swatting off the FF+ as unpatriotic, Steenhuisen as unoriginal and Malema’s comment on how “rotten land” was being redistributed as just plain wrong.

“If you want to appoint ministers, win elections,” Kubayi told the DA and the EFF. That’s after she earlier said, “We need everyone to commit to working together.”

If Day One of the parliamentary Sona debate showed anything, it’s how consensus is largely MIA. Not the best indicator for that new comprehensive social contract Ramaphosa promised, with a deadline now 95 days away. DM