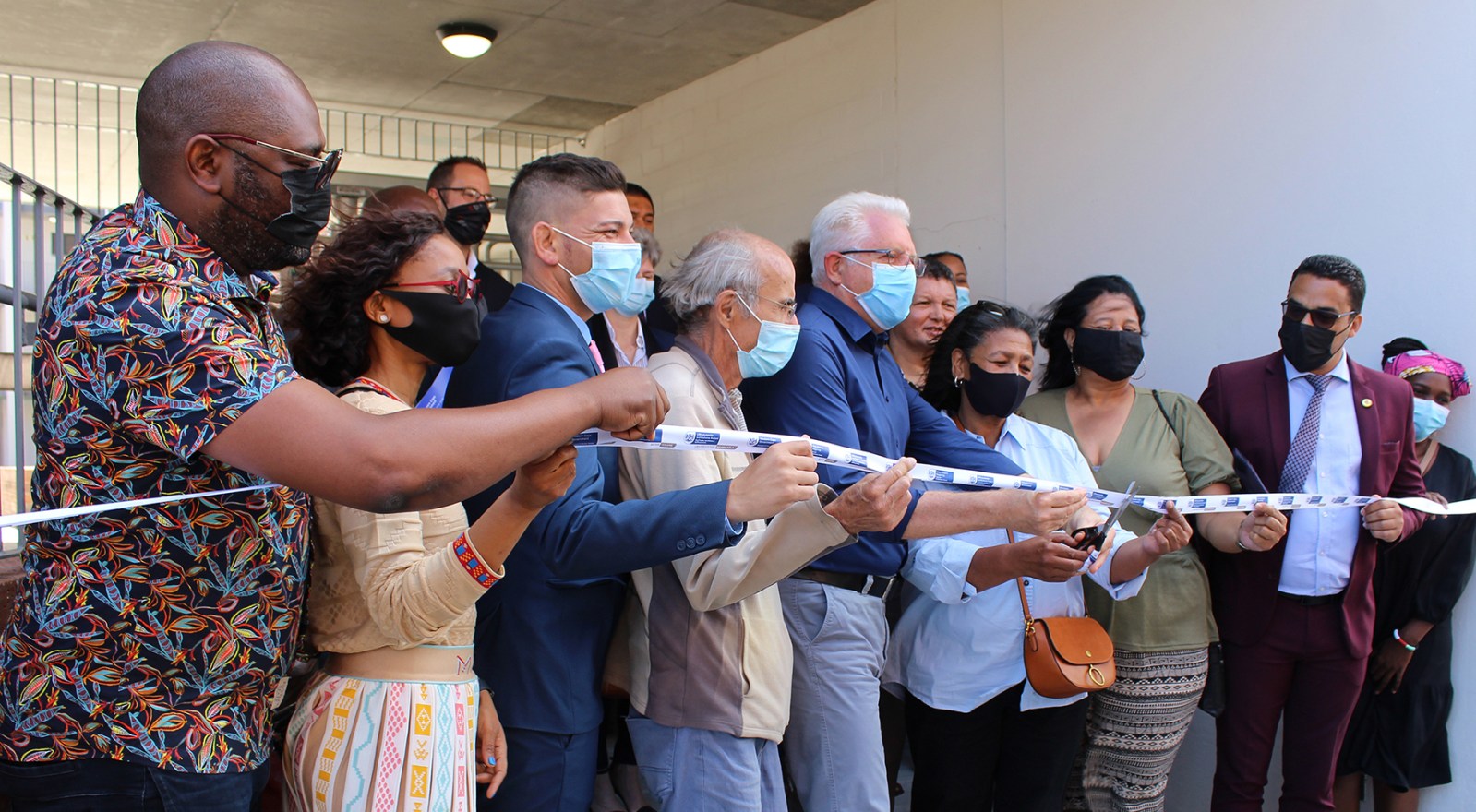 The ribbon-cutting ceremony for the handover of the first social housing units at the Conradie Park mixed-use development in Pinelands, Cape Town on 4 February 2022. Premier Alan Winde is flanked by fellow dignataries and beneficiaries of the project. (Photo: Tamsin Metelerkamp)

The Western Cape government handed over 66 complete social housing units to new residents at the Conradie Park mixed-use housing development in Pinelands on Friday. It’s an ‘exemplar’ for other provinces and municipalities seeking to address the spatial legacy of apartheid. However, NGO Ndifuna Ukwazi said that while the new units are a start, the province still has a long way to go in delivering affordable housing.

The first social housing units at the Conradie Park mixed-use development, located at the former Conradie Hospital site in Pinelands, Cape Town were handed over on Friday.

The 22-hectare site was identified as a suitable location for the pilot of the Better Living Model, a project that aims to create 3,500 mixed-use and mixed-income housing opportunities close to the Cape Town CBD, according to the Western Cape government.

“Essentially, we started this project three years ago. In summary, it was one year of planning and approvals, the second year was bulk infrastructure upgrades and the external road upgrades, and the third year was construction,” said Mark Schonrock, property development manager for the project.

“We’re very proud that we currently have over 1,750 fully serviced, affordable social housing and [Finance Linked Individual Subsidy Programme] opportunities, and are continuing now to look to roll those out in the next two to three years.”

Construction of the first phase of the social housing part of the project started in August 2020. When complete it will consist of 432 units in four blocks, according to the provincial government.

“If we truly want to address the spatial legacy apartheid has given us, it’s by creating new communities such as this,” said Simmers. “[T]his is a true exemplar, an example, for other provinces or other municipalities, even in our province. If they think about addressing the legacy of apartheid, you can only do that by effective planning and proper integration through projects such as this.”

Simmers described the project, which should be completed by 2027, as the building of a new vibrant and active community.

“For [the beneficiaries], it’s closing a chapter and opening a new one. So, by 2027, a lot of old chapters will be closing for a number of beneficiaries, but also [there will be an] opening up new opportunities,” he said.

The concerns of the existing community in Pinelands, with regards to the need for upgraded infrastructure and schooling capacity, are being addressed, according to Simmers. “I mean, the piece of vacant land next to where we are is actually where they are going to start building the school very soon.”

The project is serving to bring residents into a safer environment that is closer to work opportunities, according to Winde.

One of the beneficiaries, Candice Moyo-Zizo, was previously living in a house-share in Brooklyn, Cape Town. Her new unit, a simple space with a bedroom, bathroom and open-plan living room and kitchen, was already filled with furniture, crockery and personal knick-knacks when Daily Maverick visited her on Friday.

“Before [we moved to Conradie Park], we never relaxed – some people woke up early [in the] morning, making so much noise, fighting over stuff,” said Moyo-Zizo. “[Here] it’s more privacy, it’s a decent thing.”

She added that her new home is safer than her previous residence. “There I wasn’t safe. I was robbed when I was in the house. [Here], it’s nice and secure. Even if I don’t lock the door, I know the security is checking.”

The new residents started moving in at the beginning of 2022, according to Ntomboxolo Makoba-Somdaka, spokesperson for the Western Cape minister of public works and infrastructure.

A long way to go

The NGO Ndifuna Ukwazi, which campaigns for a more equal and spatially just Cape Town, welcomed the progress the Western Cape government has made in the delivery of social housing at Conradie Park.

In a press release on Friday, the organisation expressed hope that the project signals a commitment to releasing, packaging and developing other parcels of land for social housing, including the Tafelberg and Founders’ Garden sites.

“We remain concerned about the slow pace of delivery of various forms of affordable and social housing,” it said. “The impact of the Covid-19 pandemic has deepened spatial inequality and refocused the need for shelter and affordable housing for families in the Western Cape. There is an urgent need for the province to prioritise housing, particularly in well-located areas and economic centres.”

In the lead-up to the 2021 municipal elections, Ndifuna Ukwazi said no political party had delivered a single social housing unit in the Cape Town CBD since the end of apartheid, according to a Daily Maverick report on 7 October 2021.

Organisations such as Ndifuna Ukwazi and Reclaim the City, meanwhile, have spent years fighting for the City and provincial and national governments to commit to the delivery of social housing in Cape Town.

It was reported that both organisations took the Western Cape government to court in 2019, to contest the sale of the Tafelberg property in Sea Point to the Phyllis Jowell Jewish Day School in 2017. Activists argued that the property would be better used for 250 mixed-income housing units.

The sale of the Tafelberg site was set aside in August 2020, with the court ruling that the City and province needed to create policies on social housing.

The efforts of Reclaim the City activists also reportedly contributed towards the sale of the SABC-owned Rockland Villas in Sea Point to the Housing Development Agency, to be used for affordable housing.

In Friday’s press release, Ndifuna Ukwazi said: “Sixty-six new social housing apartments is a start, but the province still has a long way to go.” DM