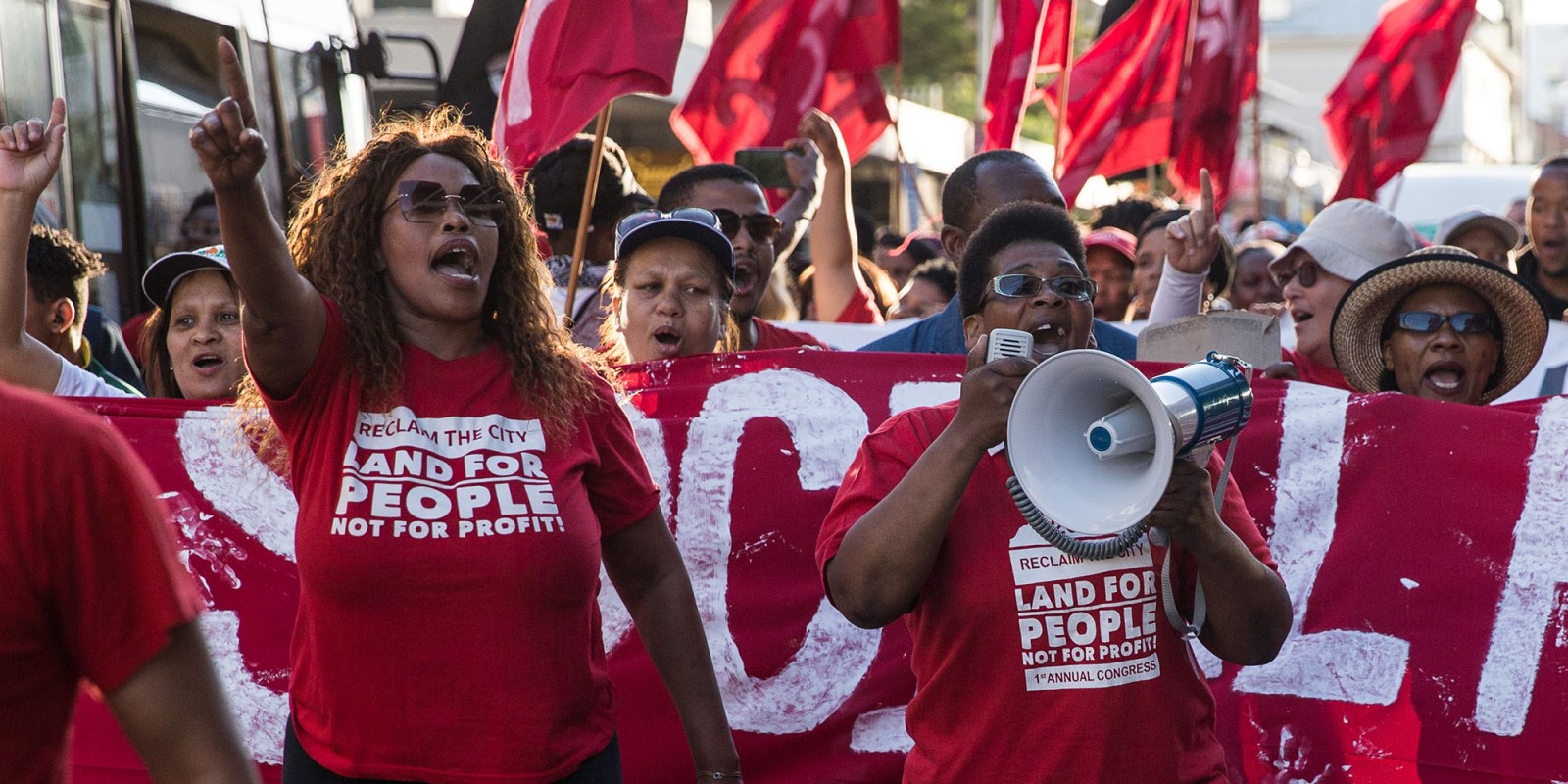 Reclaim the City protesters demand that the Tafelberg property in Sea Point be used for social housing. (Photo: Ashraf Hendricks)

The Western Cape government and the City of Cape Town have an obligation to provide housing for everyone, just not to those who want to live in social housing at the Tafelberg site in Sea Point, one of Cape Town’s most affluent suburbs, say lawyers for both the province and the City.

On Wednesday, the Western Cape High Court heard arguments in the case between Ndifuna Ukwazi and Reclaim The City against the Western Cape provincial government over the sale of the Tafelberg site in Sea Point. The court heard that it would be unfair to declare that the province and City had not built any social housing in central Cape Town. The case is in its third day and is set to conclude on Thursday, but could possibly run into Friday morning, said Judge Patrick Gamble.

Lawyer for the Western Cape provincial government, advocate Eduard Fagan SC, told the court that the provincial government had provided housing in the Western Cape, in line with its constitutional mandate. However, he argued that because the sale of the Tafelberg site had been halted, money that could have been used elsewhere was unavailable. Previously, Fagan had said the revenue collected from the sale of Tafelberg was earmarked for the purchase of a building in Dorp Street in the CBD for the provincial department of education.

“In fact, the applicants (Ndifuna Ukwazi and Reclaim The City) want the land to be vacant rather than sold to the Phyllis Jowell Jewish Day School — and the province [to be] without money to fulfil its constitutional mandate.”

The offer to sell the property was put to the school in 2017, but went on hold after demands from Ndifuna Ukwazi and Reclaim The City that the sale be set aside. In their submission on the first day of the proceedings, Ndifuna Ukwazi and Reclaim The City said that during the disposal process of the state-owned property, the Western Cape provincial government ignored its own feasibility studies which found that social housing could have been established on the property. Additionally, the notice issued of the intention to dispose of the property was published only in English and Afrikaans and excluded Xhosa, the third official language of the province.

On Wednesday, Fagan suggested that Ndifuna Ukwazi did not want the sale to go through, but when asked by Judge Patrick Gamble if there were any planned social housing projects within the CBD, Fagan kept repeating that projects were in the “pipeline”. He could not say if any social housing had been established in the CBD over the past 25 years.

Judge Gamble asked again if there were any projects for social housing in the CBD.

Attempting to answer Judge Gamble, advocate Nazreen Bawa SC, for the City, admitted that no social housing had been established in the CBD area over the past 25 years, adding it was “very naive to think that this city and other cities can change the decades of apartheid spatial planning … in 25 years”.

Bawa said the City was doing its best to provide for “those who were deprived of services” through the provision of housing and through informal settlements. She admitted the City had created social housing, but not within a 3.5km radius of the CBD and it was therefore “not fair to say the City has done nothing”.

Trying to explain the City’s view on the Tafelberg sale — a site within about 3.5km of the CBD, Bawa said:

The case will continue on Thursday with representations from lawyers for Phyllis Jowell Jewish Day School — which bought the 1.7-hectare property — with responses by Human Settlements Minister Lindiwe Sisulu and the Social Housing Regulatory Authority. The case will conclude on Friday when representatives of Ndifuna Ukwazi and Reclaim The City make closing remarks. DM