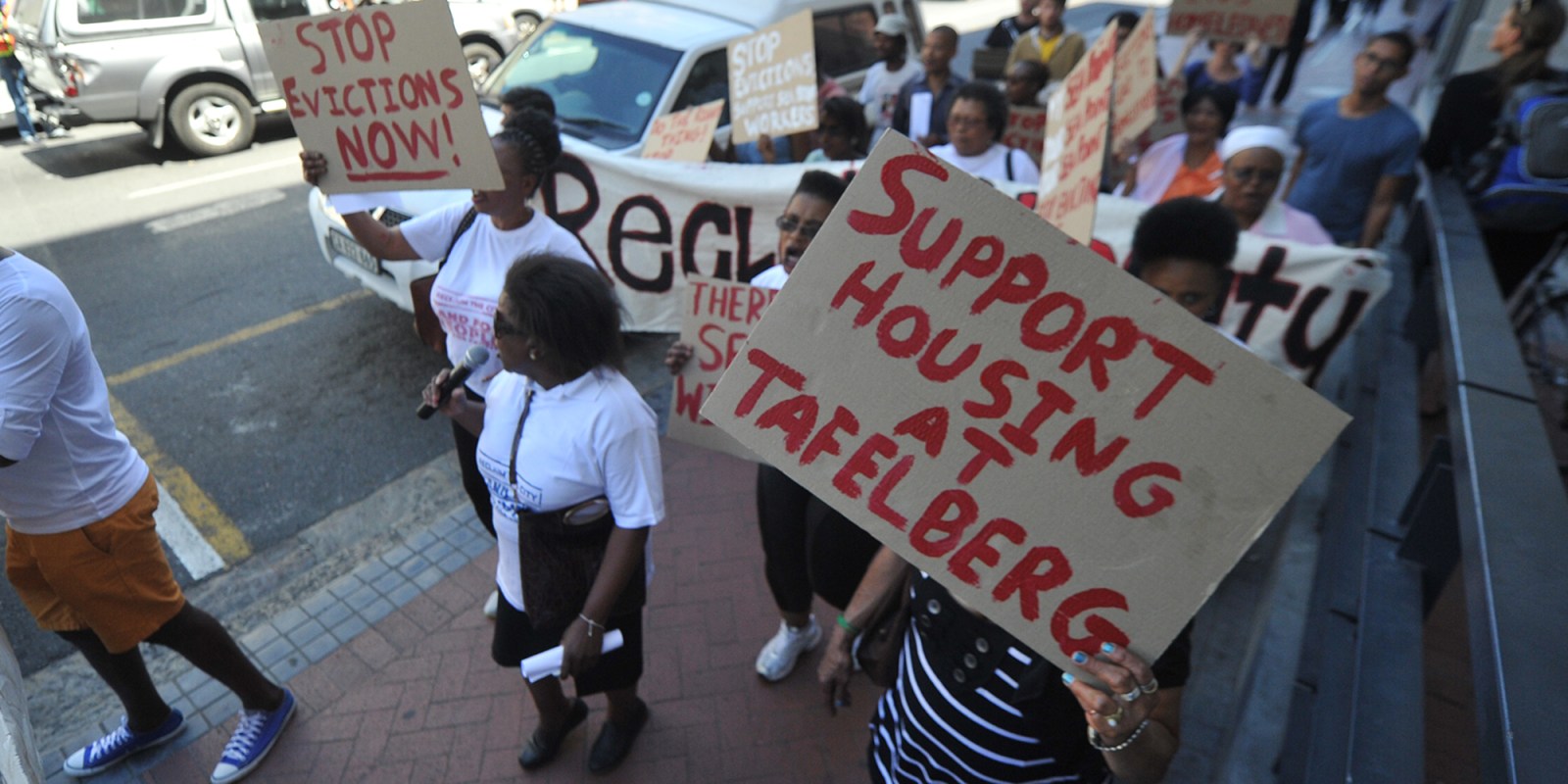 Archive Photo: A group of Reclaim the City supporters march through Sea Point in protest against evictions in the area on November 30, 2016 in Cape Town, South Africa. (Photo: Lulama Zenzile/Die Burger/Gallo Images)

Did the Western Cape Provincial government flout certain necessary co-operative laws when trying to sell the disused Tafelberg property in Sea Point? A court case brought by housing activists Reclaim The City and Ndifuna Ukwazi Law Centre got underway in the Western Cape High Court to challenge the sale of the property, set on prime province-owned land.

A case brought by two activist organisations this week could set a precedent for how the Western Cape and City of Cape Town governments plan to redress apartheid-era spatial planning within the Cape Town CBD.

The Western Cape High Court is hearing arguments on whether the provincial government complied with the necessary regulations in the selling of the former Tafelberg school property in Sea Point to the Phyllis Jovell Jewish Day School for R135-million in 2017.

The sale, completed under former premier Helen Zille, caused controversy. Activists wanted the property of just over 1.7ha to be used for social housing, but the province wanted to dispose of it for an additional source of income. This led to the court application by Ndifuna Ukwazi and Reclaim The City and other housing activists.

Legal representatives for Ndifuna Ukwazi and Reclaim The City began the proceedings on Monday by questioning if the Western Cape government, had in the past 25 years created social or affordable housing in the Cape Town CBD. Advocate Pete Hathorn SC, acting for applicants Ndifuna Ukwazi and Reclaim The City, told the court that the province, along with the City of Cape Town, had failed to attempt to redress apartheid-era spatial planning by not using prime land located in 20 suburbs close to the CBD for affordable or social housing.

Hathorn asked why there had been no provision of affordable housing for those who want to live and work in the CBD when it “contributes more than a quarter” of the city’s Gross Domestic Product and provided almost 30% of the employment in the metro.

“I think we can safely assume that since 1994, there has been no social housing completed, and this needs to be looked at,” said Hathorn.

Affordable housing, Hathorn told the court, could be done through mechanisms such as social housing managed by a rental agency. It was an “uncomfortable truth”, Hathorn said, that neither the City nor province had built affordable housing within the Cape Town CBD since 1994.

“Both levers (of government) acknowledge shortcomings to address apartheid spatial planning,” he said.

Ndifuna Ukwazi wants the court to declare that the province and City have failed to fulfil their obligations in terms of the Constitution and other laws to redress spatial apartheid planning in central Cape Town. In addition, Ndifuna Ukwazi wants the court to set aside the decision to sell Tafelberg and make a declaratory order to both the City and province to state what steps they have taken to comply with their constitutional and statutory obligations.

The National Department of Human Settlements has also joined the case. Lawyer for the department Ismail Jaime SC said the department joined the case as it alleges that the province did not properly consult it on the decision to sell the Tafelberg property, with plans for a private school to be established on the property.

Jaime stressed that “all spheres must work together” in the case. He said the national department found out about the sale “in the press”.

“You don’t treat other spheres of government in the way the national government was treated here,” Jaime said.

The case continues until Thursday, as lawyers representing the Western Cape government, the Social Housing Regulatory Authority, the City of Cape Town and the Phyllis Jowell Jewish Day School will argue before Judges Patrick Gamble and Monde Samela. DM