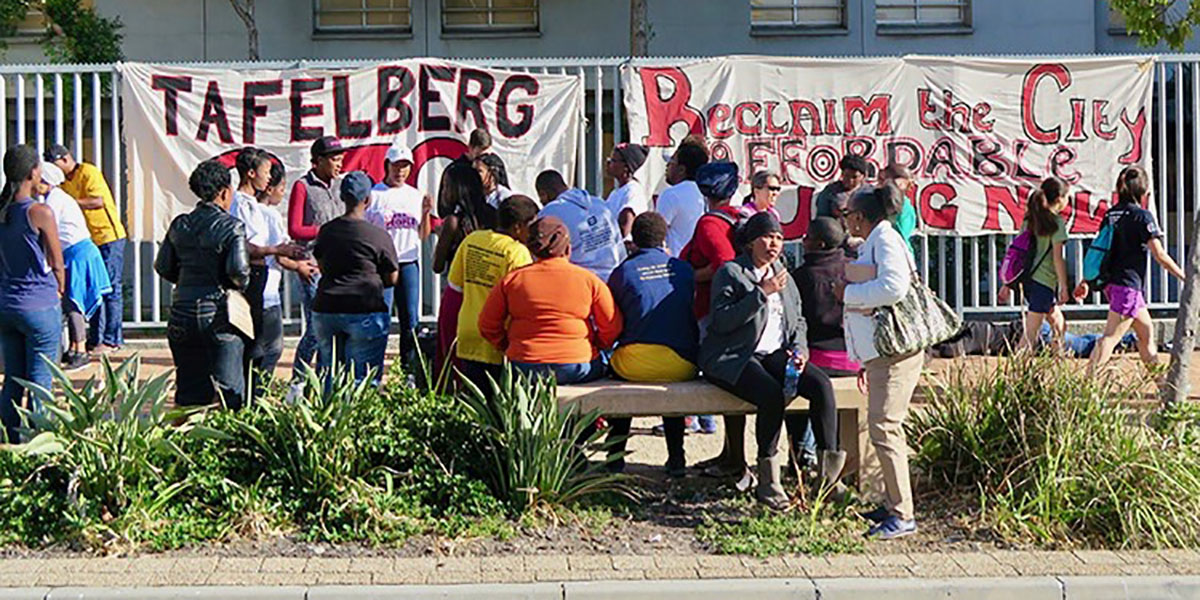 Protest against the decision not to use the Tafelberg school site for affordable housing. (Photo: Ashleigh Furlong/GroundUp)

Having affordable housing closer to more affluent schools within Cape Town’s CBD would promote a much better learning opportunity for students commuting from poorer communities, the Western Cape High Court heard on Tuesday, especially if they are faced with a very real threat of crime such as muggings and even sexual assault while making their way to school.

Schoolchildren are facing crimes while commuting between more affluent schools within the Cape Town CBD and the townships. What if social or affordable housing were used to shorten this gap and create a better learning environment for these learners, asked Equal Education (EE) on Tuesday in Cape Town.

Equal Education, acting as amicus curiae in the case in which Ndifuna Ukwazi and Reclaim the City, are asking the Western Cape High Court to set aside the sale of the Tafelberg property in Sea Point, sold by the Western Cape Government to the Phyllis Jowell Jewish Day School in 2017 under the administration of former premier Helen Zille.

The case is currently before Judges Patrick Gamble and Monde Samela. Tuesday marked the second day of the case and featured representations by Equal Education, the Social Housing Regulatory Authority and the Western Cape government. In the morning, the national department of Human Settlements made presentations, following its initial presentation on Monday.

Read the proceedings from Day One of the court case on Monday in Daily Maverick.

Equal Education, acting as a friend of the court, tried to explain how policy decisions affect other related issues such as the education of school-going children. Their lawyer, advocate Janice Bleazard, made the case for the Tafelberg property as an example of how much it would benefit families, especially learners who would have to get up, some even at 4am, to travel to schools within the CBD — just to make it in time for classes at 8am.

Bleazard read testimony from three school principals in the CBD about how most commuting learners arrived late for school and travelled long distances, often in traffic, for up to two hours a day to get home.

The principal of Sea Point High, Bleazard told the court, said in a survey that “a vast majority of learners don’t live in Cape Town’s CBD” and thus would be travelling for a long time to get to school. This daily commute for learners comes at a cost, explained Bleazard, as learners arrive late at school, missing essential class time, too exhausted to do even simple chores or homework. This was not even taking into account the threat of crime when learners often travelled alone and in the dark.

Bleazard said policymakers should be aware of how policy decisions affected other situations, such as education. The EE had submissions from parents who worked and lived in Sea Point but had no space to accommodate their children there. “These children have to be hidden” from employers, said Bleazard.

After listening to EE’s representation, Judge Samela said the separation of parents and children was “a very sad story that we are still having in Cape Town”.

In its response, the Western Cape, through its representative Eduard Fagan SC, told the court the province had limited funds to do its constitutionally mandated work. Fagan said that 70% of the province’s budget went to health and education and that “leaves 30% for everything else”.

Fagan said provinces themselves had limited means of income. The R135-million would bring income for the provincial government. Fagan explained that this revenue would be used to purchase a building in Dorp Street in the CBD for the provincial education department (WCED), as the department had used rental space at the time of the Tafelberg sale.

Fagan described EE’s affidavits as “disturbing to read” as it seemed EE was preventing the sale when in fact the sale “would free up money for school infrastructure”. He said using the land for social housing instead of allowing it to be sold for education department offices would deprive the Western Cape government of money it could use for education.

Fagan accused Ndifuna Ukwazi of acting in the interests of those who want social housing but ignoring the needs of the homeless.

At the moment, the sale is on hold while the court decides on the fate of the prime land on Sea Point Main Road. The decision to sell the Tafelberg site became controversial in 2017 as it emerged that the provincial government ignored its own feasibility study which pointed out that the site could well be used for social housing, but instead, leaked documents show the province ignored its own advice and wanted the proceeds of the sale to go towards the funding of office spaces for the education department.

The case continues on Wednesday as the province is set to continue defending the sale. This is expected to be followed by representations by the City of Cape Town and the buyers of the property, the Phyllis Jowell Jewish Day School. DM