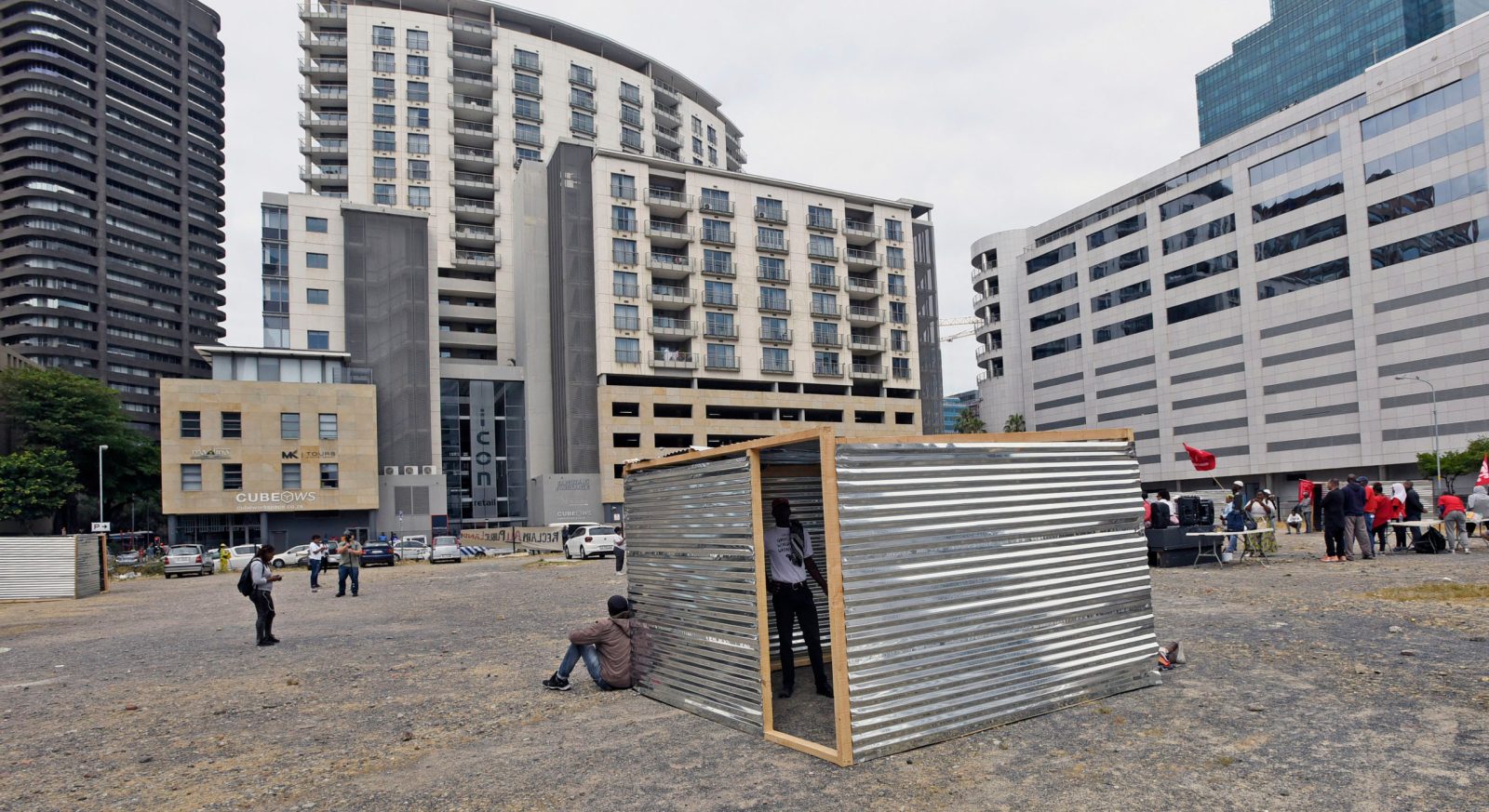 A shack erected on the Foreshore in Cape Town by social housing and advocacy groups on 4 December 2018. (Photo: Gallo Images / Brenton Geach)

There has been no social housing built in Cape Town’s CBD in 27 years, and politicians are wasting no time in using this to score points with the electorate.

No political party has delivered a single social housing unit in the Cape Town CBD or surrounding areas, said NGO Ndifuna Ukwazi. This comes as parties vie for control of the city, making affordable housing a talking point as the country heads towards municipal elections.

The lack of affordable housing in and around Cape Town’s City Bowl has in recent days been a contentious subject of debate between the DA, which controls the city, and Good party leader Patricia de Lille. Both sides have been playing the blame game.

Ndifuna Ukwazi, meanwhile, has consistently pushed for the release of public land — whether owned by the city, province or national government — so that affordable housing can be built in Cape Town’s CBD. Property prices in the city are beyond the reach of many people.

“No political party since the end of apartheid has delivered a single social housing unit in the Cape Town CBD and surrounds, and the delivery of other forms of affordable housing has not adequately responded to the growing housing crisis,” said Ndifuna Ukwazi.

Affordable housing as an election issue

Affordable housing in the CBD was a thorny issue even when De Lille served as Cape Town mayor from 2011 to 2018. A year before she held that position, she was the Western Cape MEC for Social Development.

She resigned from the DA almost three years ago, claiming her split with the party was caused by differences of opinion over affordable housing in the city.

Staunch De Lille ally Brett Herron, also a former member of the provincial government, left the DA at about the same time over what he called a “cabal of white DA councillors” who blocked social housing in the Salt River and Woodstock areas, near the CBD.

In 2019, De Lille’s new party, Good, won two seats in Parliament in the national elections. De Lille became an MP and was subsequently appointed Minister of Public Works and Infrastructure in President Ramaphosa’s Cabinet. Herron became a member of the Western Cape legislature after Good won a single seat. Herron is standing for mayor of Cape Town in the November elections.

Hill-Lewis wants De Lille to stop leasing the village to Parliament — she said the precinct housed 60 out of 65 DA MPs — and give the land to the city so that the private sector may release “hundreds” of affordable housing units.

However, De Lille dismissed the request as an attempt to “electioneer in my name”. De Lille then urged the city to release its own land — including several sites in the CBD which she and Herron had apparently tried to release during 2017 and 2018.

At a briefing in the city, De Lille told Good supporters: “It is wrong to play political games over the serious topic of housing… then, on top of it all, to lie about the availability of land.”

De Lille accused the DA of telling “blue lies” in its demand that she release land, while the city has its own land that could be used for housing.

What do election manifestos say about affordable housing?

While both the DA and Good mention affordable housing in well-located areas in their manifestos, details are scant.

The DA — which holds 154 of 230 seats on the city council — said it would “release unutilised state-owned land parcels for the purpose of housing developments, taking into consideration the potential for the land to be used for other economic or social purposes”.

However, the DA manifesto does not say where these land parcels are. The party said it would continue to work on projects that are expected to be “achieved in the near future”. According to the DA’s manifesto, the city’s projects will develop close to 2,000 affordable housing opportunities “on well-located pieces of land in and near urban centres across the metro to enable greater spatial equality”.

In Good’s manifesto, the party says it will “increase the delivery of affordable housing by using public land for public good”. Also, the party will make sure there is a mix of “high-density affordable and rental housing on well-located land” — although the party makes no specific mention of how this would be accomplished if it were in government. Good is contesting its first municipal poll.

In the ANC’s manifesto, the party says it will use land to “ensure communities are located on well-situated land”. The governing party also says it will change land use approaches to better integrate housing, recreation and economic facilities.

In its manifesto, the EFF says every municipality led by the party would do away with apartheid spatial planning and expropriate land without compensation closer to inner-city centres to “build sustainable housing for all”.

Tafelberg, Rocklands Villas and the work of activists

But while political parties have made affordable housing an election issue, organisations such as Ndifuna Ukwazi and Reclaim the City have spent years fighting for the same thing.

In 2019, both organisations took the Western Cape government to court to set aside the sale of the Tafelberg property in Sea Point. The site, owned by the provincial government and situated on the upmarket Atlantic Seaboard, was sold to the Phyllis Jowell Jewish Day School in 2017. This caused an outcry among activists, who said the property could yield 250 mixed-income housing units in one of the city’s richest suburbs. And they took it to court.

During proceedings in the Western Cape High Court in 2019, lawyers for the City of Cape Town admitted that no social housing had been built in the CBD in the past 25 years.

In August 2020, the sale of the Tafelberg site was set aside and the court ruled that the city and the province must create policies on social housing for those who qualified. The province and the city appealed against the ruling, but the high court first wanted to determine if the provincial government or the day school owned the site.

In another landmark moment in the fight for affordable housing in Cape Town, the SABC-owned Rocklands Villas, also in Sea Point, was sold to the Housing Development Agency to be used specifically for affordable housing. This was largely due to the sustained efforts of Reclaim the City activists, such as Elizabeth Gqoboka, who kept up the pressure for the release of the land.

Ndifuna Ukwazi told Daily Maverick what was needed now was for politicians from all parties to genuinely commit to the urgent delivery of well-located, affordable housing.

The organisation called for the “urgent release” of all available land by the city, province and national government so that people could finally afford decent housing in the city itself. DM