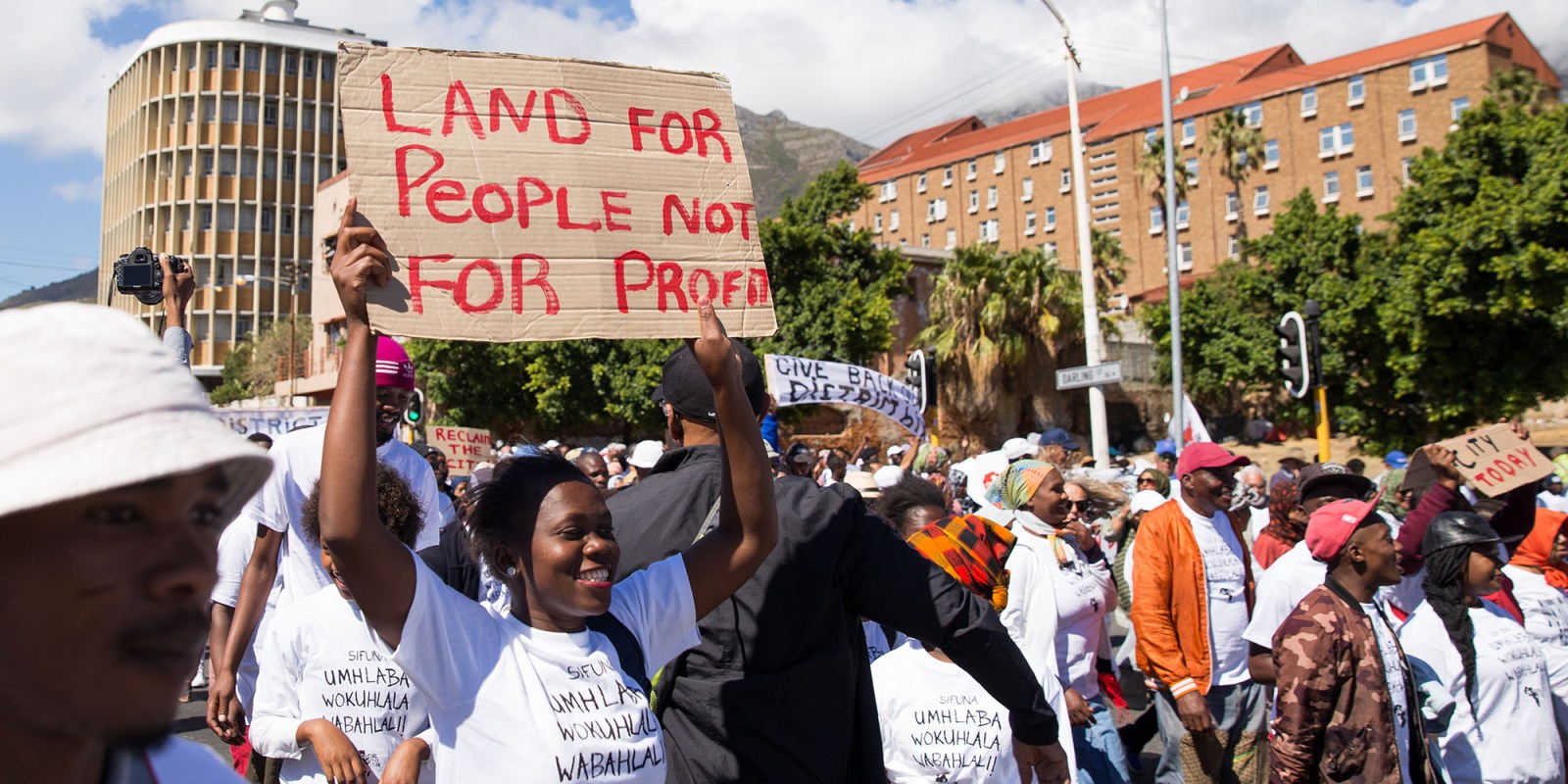 Protests over the sale of land in Cape Town's CBD and legal action resulted in a win for affordable housing on Monday, 31 August 2020 when judges ruled against the City of Cape Town. (Photo: Ashraf Hendricks/GroundUp)

The sale of the Tafelberg site in Cape Town has been a contentious issue in the fight for affordable housing in Cape Town’s city centre. On Monday, the Western Cape High Court set aside the sale of the land and told the provincial government and the City to draw up policies that address apartheid legacies in central Cape Town.

On Monday, 31 August, the sale of the Tafelberg property in the Cape Town suburb of Sea Point was reviewed and set aside by the Western Cape High Court. The 1.7 hectare site, just 3.5km outside the Cape Town CBD on the Atlantic Seaboard, has become a bone of contention between activists who want affordable housing within the CBD and two spheres of government who admit no affordable or social housing has been developed in the CBD in the last 25 years.

In March 2017, under then premier Helen Zille, the City-owned site – known as the Tafelberg property – was sold to the Phyllis Jowell Jewish Day School for R135-million. At the time, the province wanted to use the revenue to buy a building for the Western Cape Education Department, but activists instead wanted the 1.7ha site to be used for social housing. Housing activists, Reclaim The City and Ndifuna Ukwazi then launched a court application to halt the sale of the property.

Over a period of five days in November 2019, the court heard various arguments regarding the sale: on Day 1, lawyers for Ndifuna Ukwazi argued that the province and the City had failed in 25 years to provide social and affordable housing within the boundaries of the Cape Town CBD.

On Day 2, Equal Education, who joined the case as friends of the court, argued that housing policy needed to take education into consideration – that learners could benefit from better schooling and shorter commuting times if they lived nearer to schools within the CBD.

On Day 3, lawyers for the City of Cape Town admitted there was no social housing built in the CBD in 25 years.

On Day 4, GroundUp reported that lawyers for the Phyllis Jowell Jewish Day School said there would be 44 affordable housing units built on the property, should the sale go through.

On Day 5, the Social Housing Regulatory Authority claimed there was no consultation from the province on the sale of the property.

Now, Judges Patrick Gamble and Monde Semela have set aside the sale of the property and the subsequent decision by the province not to withdraw from the sale.

The court found the province did not first offer the land to the provincial housing department before it sold the property. Additionally, the province erred when it concluded that the site did not fall within a restructuring zone – which meant if it were zoned accordingly, “the designation of such a zone would have entitled the province to apply for a reconstruction grant from the national department of human settlements, in the event that it decided to develop affordable housing on the Tafelberg site”, read the judgment.

Additionally, the court issued a declaratory order that the Western Cape government and the City of Cape Town failed constitutionally to provide access to affordable housing to people who qualified. The court ruled that both the City and the province must draw up a combined policy to address this and report back to the court by 31 May 2021 with an update on this plan.

At the same time, the court found that the province needed to consult the national human settlements department on the sale of the Tafelberg site. The department also launched a parallel court case, saying the department was not consulted on the disposal of the land.

The judges found “the premier’s (Helen Zille) refusal to consult the human settlements minister was in breach of her duties to promote cooperative governance between the different spheres of government under Chapter 3 of the Constitution”.

After the ruling, Mandisa Shandu, the executive director of Ndifuna Ukwazi, told Daily Maverick: “This is huge… a lot of our work in advancing land justice has been launched from this Tafelberg issue.”

Shandu said the judgment affirmed that the province has an obligation to use land for affordable housing.

“The unlawful sale of the Tafelberg school site demonstrates this government’s resistance to social and spatial integration, and to using well-located public land to address the housing deficit,” said Brett Herron, former Cape Town mayoral committee member for transport and urban development, and currently a member of the Western Cape provincial legislature.

“The fact that the Western Cape government persisted with the sale, despite all the evidence that the site was viable for affordable social housing – and despite the pleas of countless organisations and housing experts – was an act of arrogance and defiance,” he said.

In a statement, the Western Cape government said it noted the judgment. “We will be studying the judgment, which is over 200 pages long, in detail and in consultation with our legal counsel and that of our custodian Public Works Department before determining any next step in this matter.

“The Western Cape government is deeply committed to addressing the need of residents for affordable housing and redressing the spatial legacy of apartheid. In this regard, we have a year-round build programme developing a range of affordable housing options which are close to economic and educational opportunities, and public transport routes, and which will allow residents to build lives that they value, for themselves and for their families,” said Premier Alan Winde in the statement.

The province and the City were ordered by the court to pay RTC’s costs in the application. In the case between the human settlements department and the province, the court ruled the province should pay the costs. DM