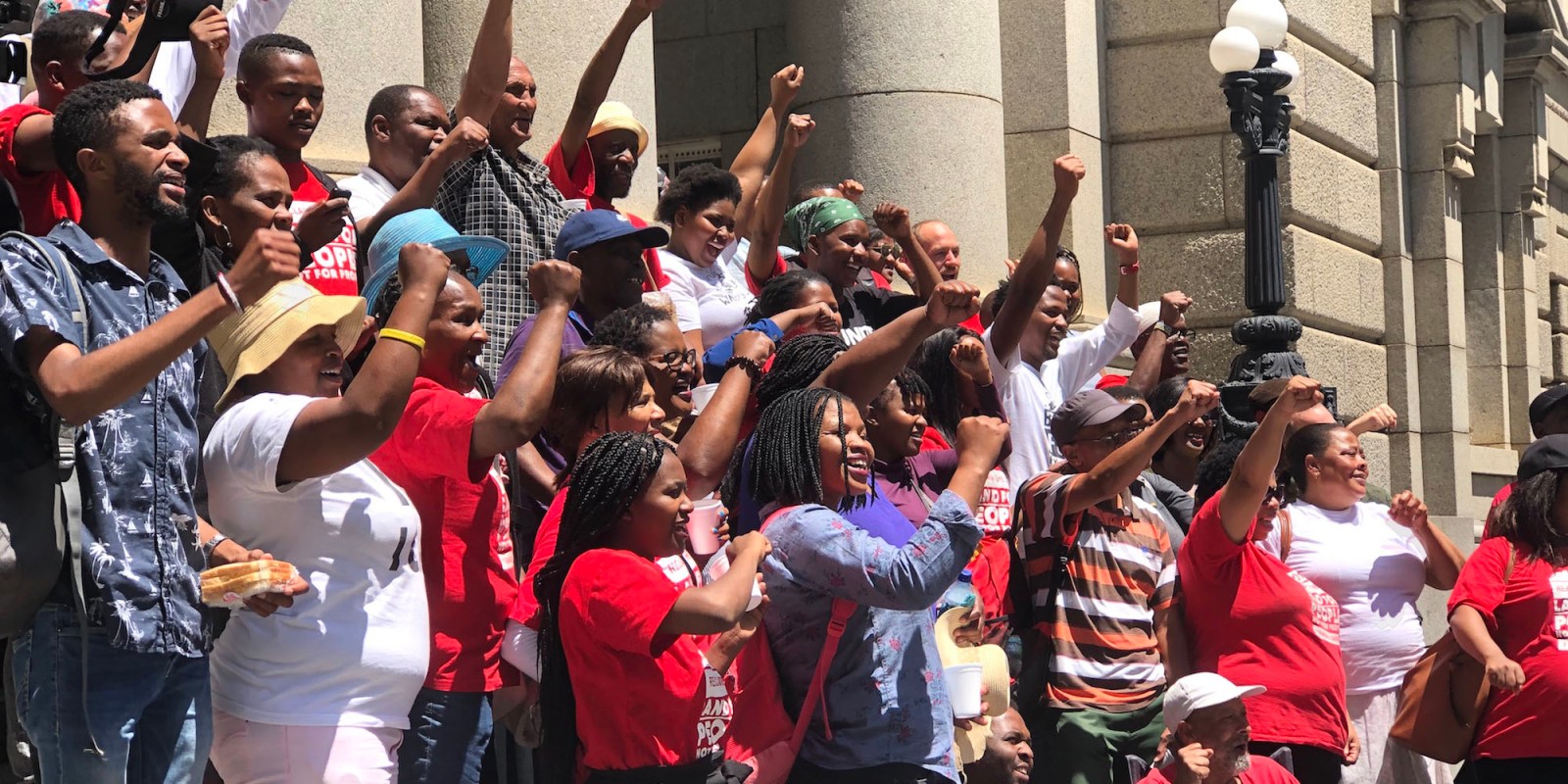 Supporters of Reclaim the City and Ndifuna Ukwazi chanted on the steps of the Western Cape High Court. (Photo: Madison Yauger/GroundUp)

Social housing within the inner city of one of the country’s most segregated cities can be used to reverse the effects of apartheid-era spatial planning, argue housing activists. The Social Housing Regulatory Authority also agrees. This was heard at the Western Cape High Court during the final day of court proceedings, which will decide the fate of Tafelberg, a piece of prime land on the Atlantic Seaboard in Cape Town.

While the City of Cape Town and the Western Cape government have admitted that no social housing units have been completed within the inner city area of Cape Town, housing activists and now, the Social Housing Regulatory Authority (SHRA), agree that creating social housing is a key step in addressing spatial planning in a city that is not only divided by race lines, but along socio-economic lines too.

On the last day of court proceedings on 29 November 2019, advocate Emma Webber acting on behalf of the SHRA, said that despite the province stating recently that they could not afford the costs of building social housing on the property, the Western Cape government could have approached social housing institutions for additional funding if needed, through debt funding allocations.

More importantly, Webber argued the re-use of the property as social housing could address the effects of apartheid-era spatial planning, which are still dividing communities.

“It’s common cause that Cape Town is a spatially divided … the city and the province have both admitted there has been no social housing in the inner City of Cape Town, but they refer to other social housing projects that are further afield,” she said.

The Tafelberg site, as heard over the course of the past few days, is ideally located within inner Cape Town – it’s just 3.5km outside the central business district.

The Tafelberg case is about the sale of the provincially-owned property located in one of Cape Town’s more affluent suburbs, which Ndifuna Ukwazi (NU) and Reclaim The City (RTC) argue can be used for social housing. In 2017, the vacant property along Sea Point’s Main Road was sold to the Phyllis Jowell Jewish Day School by the Western Cape government by then-premier Helen Zille, despite their own feasibility studies showing the property could be used for social housing.

NU and RTC want the Western Cape High Court to set aside the initial sale They are also seeking a declaratory order to monitor and enforce the building of social housing within the inner City of Cape Town.

The Minister for Human Settlements, Lindiwe Sisulu also joined the case, as they claim they were not consulted on the sale of the property, which they also claim are against certain aspects of co-operative governance regulations.

The SHRA claims there was no consultation by the Western Cape government about the disposal of the property.

The Western Cape government argues, however, the income generated from the sale – R135-million – would be used towards “school infrastructure” and the purchasing of new office space for the Western Cape Education Department.

Read in Daily Maverick the court’s proceedings for this week:

In closing arguments, NU’s legal representative advocate Peter Hathorn SC explained why this space – a 1.7-hectare piece of prime land – needed to be used for social housing. “Cape Town is still an apartheid city, still resembles the make-up of Cape Town in the 1970s,” argued Hathorn.

Judge Patrick Gamble told the court, in conclusion to arguments made by all of the parties legal representatives: “You’ve given lots to think about … It’s going to take time”.

Gamble said a target for the judgment was usually three months, but in this case, because of all the documents that needed to read through, judgment will likely be set down in May or June 2020 as this “will have huge ramifications for everyone”. DM